Will the Russian military return to Mozambique?

October 3 2019
32
The time has come for political contacts and economic contracts and the expansion of Russia's military presence on the African continent. From sale weapons to African countries, which did not stop even in the first two post-Soviet decades, the Russian Federation is moving to a more tangible military-political presence. 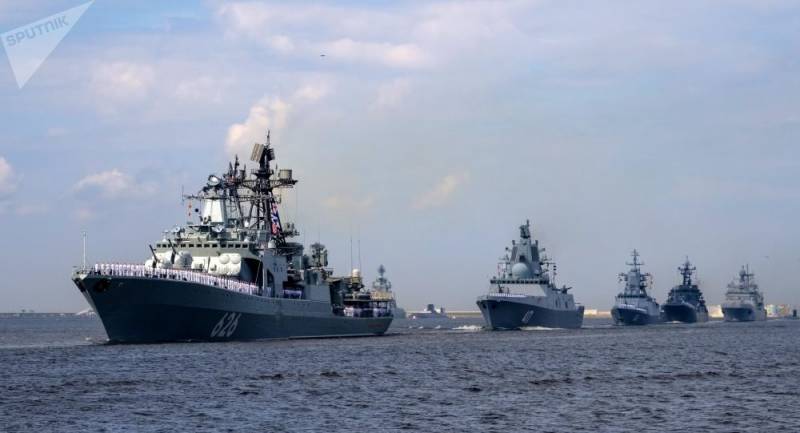 Why Russia is again active in Africa

At one time, the Soviet Union made a huge contribution to the political history of the entire African continent, unequivocally taking the side of almost all anti-colonial movements and providing comprehensive assistance to dozens of African states freed from colonial dependence. From Egypt and Algeria to Zimbabwe and Namibia - everywhere the trace of the Soviet presence was very noticeable.

The collapse of the USSR and the political and economic perturbations taking place in the life of post-Soviet Russia for several decades weakened Moscow’s attention to the African continent. In the nineties and even zero Russia was not up to Africa. The only line along which contacts were still very developed is the supply of weapons and military equipment. Until now, African countries are important buyers of Russian weapons, attractive, first of all, for their significantly cheaper cost compared to weapons made in America or Europe.

Now Russia is more and more actively designating its foreign policy and is striving to at least partially regain the positions lost after the collapse of the USSR. The African continent attracts Moscow with its economic potential. Africa is a real storehouse of minerals, and far from all of the deposits are exploited and even explored. Mining is one of the first reasons for the growing interest of both Russian companies and the authorities in Africa.

The second reason is the development of foreign trade relations. Africa is a very promising buyer of Russian products, and not just weapons. At the same time, under the conditions of sanctions, African countries can also act as suppliers of agricultural products, replacing those European countries with which Russia has noticeably worsened relations since the spring of 2014.

Finally, the third reason is geopolitical rivalry with the United States. If you do not claim your presence in Africa, the continent will be under the control of the Americans. But not all African regimes are now in good relations with the United States. And Moscow places emphasis on this factor, developing political and military ties with the governments of a number of African states.

At present, Russia is most actively developing military cooperation with the Central African Republic, Sudan, Egypt, but positions are gradually returning to the former Portuguese colonies, with which the USSR maintained very close ties. Thus, cooperation with Mozambique has great prospects.

In the spring of 2018, Russian Minister of Defense Army General Sergei Shoigu signed an agreement with the Mozambique Minister of Defense, Major General Atanaziu Salvador Mtumuke, on a simplified procedure for the entry of Russian warships into Mozambique ports. Analysts call this agreement the first step towards creating a permanent Russian naval base in a distant country in the south of the African continent. Moreover, the Mozambique authorities express interest in the presence of the Russian military. 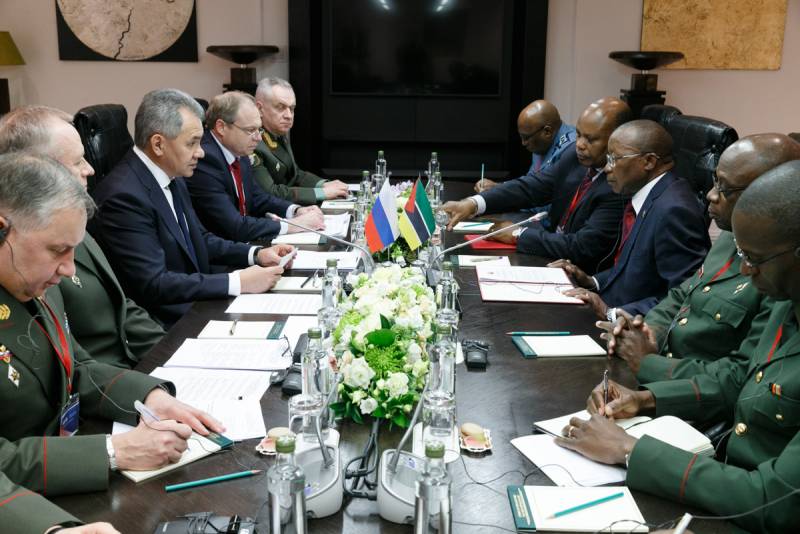 The Soviet Union had a special relationship with Mozambique. Not for nothing that even the Kalashnikov rifle is depicted on the coat of arms of this country. In the 1960-1970-years of the USSR provided great support to the colonies of Portugal, fighting for their independence. Moscow made a very serious contribution to ensure that Mozambique, Angola, and Guinea-Bissau become sovereign states.

The rebel movements operating "under the roof" of Moscow received weapons, military equipment, money, information support from the Soviet Union, and in the Soviet military educational institutions they trained future commanders, engineers, political workers for partisan fronts, which, after the declaration of independence of the former colonies, became armed forces of the sovereign states.

Soviet military experts were in Mozambique - albeit not in such numbers as in Angola, but still. At that time, by the way, a student of the 5 course of the philological faculty of Leningrad State University Igor Sechin was sent to Mozambique by a military translator. Just then the situation in this African country was the most tense and the presence of a large number of Soviet military was required there. 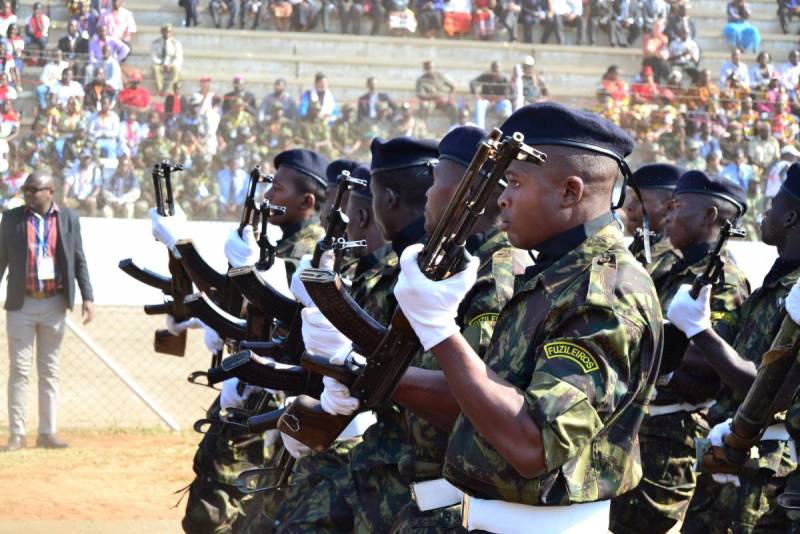 During the civil war in Mozambique, Soviet officers took part in the hostilities on the side of the pro-Soviet FRELIMO. According to official figures, during the entire armed conflict in this country, 6 Soviet troops were killed, and 2 people died from illnesses.

After the collapse of the USSR, contacts between Russia and Mozambique weakened. And only in the 2010's did the revival of past contacts begin. It all started with the fact that in Mozambique, which remains one of the poorest countries in the African continent, impressive deposits of oil and gas were unexpectedly found.

Gas was discovered in the province of Cabo Delgado. This is the extreme north of Mozambique, close to the border with Tanzania. The province had never before had a high standard of living, even by very modest Mozambique standards, but after discovering the gas, the country had a chance to become the new Angola, and Cabo Delgado the richest region. Naturally, immediately foreign capital began to show interest in the Mozambique province. First, the South African SASOL Ltd began the construction of a gas pipeline from Cabo Delgado to South Africa.

Then gas fields were found in the Indian Ocean, off the coast of the same province of Cabo Delgado, and the Italian company ENI, together with the American Anadarco, decided to fit the LNG floating plants directly to the fields in the sea and immediately take gas from there for export. At the same time, no one was going to invest in the development of the infrastructure of Mozambique itself, in creating jobs for the local population. Then the Mozambican authorities agreed to introduce rules that greatly complicate the conduct of business in the country for foreigners.

And then it began. In the province of Cabo Delgado appeared ... Islamic radicals. Although Mozambique is a former Portuguese colony, Muslims live in the north of the country in very small numbers, and the bulk of the population is formally considered Catholics, and in fact continues to practice traditional beliefs. Nevertheless, the militants of the radical group Al-Sunna wa Jamaa launched real terror in the north of Mozambique. They attack villages inhabited by Catholics, do not hesitate to kill women and children, and ruin Christian churches and schools. The local population is terrified, and foreign investors are thinking about the further feasibility of working in the "troubled" northern province.

Mozambique authorities are interested in stabilizing the situation in their northern province as soon as possible. After all, terror impedes the full development of the infrastructure necessary for the further exploitation of gas fields. But Western countries do not offer assistance to the Mozambican president, Philip Newsy. Order can only be restored with the help of the same Kalashnikov assault rifle depicted on the Mozambique coat of arms and the country that produced this assault rifle.

Will the Russian military come to Mozambique?

Vladimir Putin and his colleague Filipe Newsi signed several documents on military-technical and economic cooperation between the two states, but most importantly, he forgave Mozambique 95% of his old debt. And in Mozambique, they started talking not only about the unhindered entry of Russian ships into the country's ports, but also about attracting Russian military instructors to train the Mozambique army. 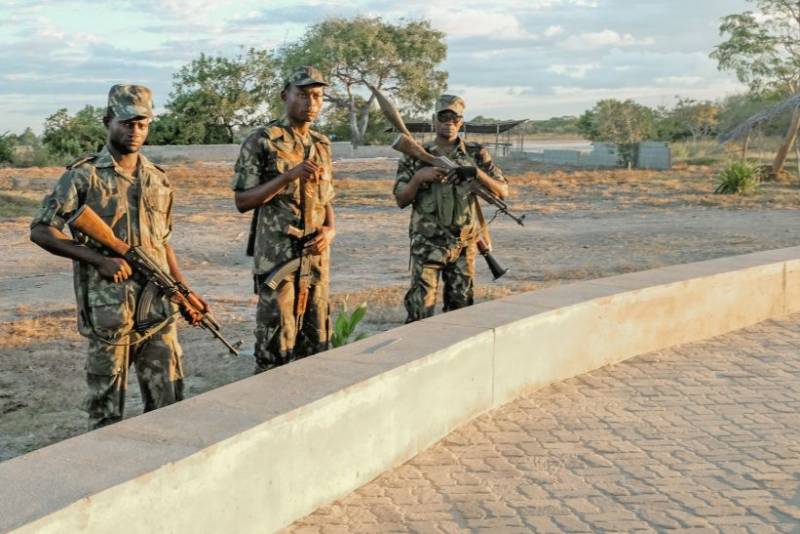 First of all, Mozambique is interested in training special forces, which perform the main range of tasks to combat terrorists. Apparently, it is precisely for them that foreign (Russian) military advisers are required. And this already implies the development of contacts between the General Directorate of the General Staff of the RF Armed Forces (ex-GRU).

An article by Jose Milazes appeared in the Portuguese newspaper Observador, in which the author claims the arrival of 160 Russian troops in Mozambique. Their goal is supposedly to deploy a Russian naval base and GRU special forces base in the former Portuguese colony. The author of the article did not forget to emphasize that the Russian military can take part in the hostilities against terrorists in the province of Cabo Delgado.

Another Portuguese journalist, Nuno Felix, on his Twitter account was even more specific. He wrote that Russian helicopters delivered military specialists to the cities of Mueda and Nakala. Allegedly, the Russian military together with the Mozambique government troops will participate in military operations against Islamic radicals operating in the province of Kabu Delgado. 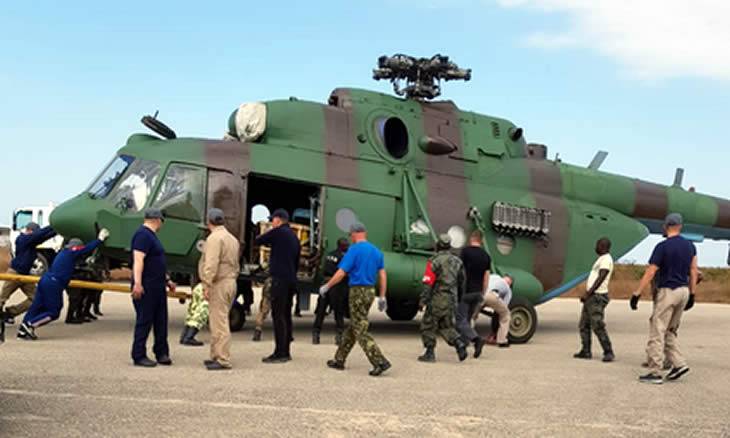 So far, both in Moscow and Maputo have denied the presence of Russian troops in Mozambique. But in fact, until recently, there were no Russian military in the Central African Republic, but then we still had to admit that our instructors were helping the Central African military department in organizing combat training for the Central African army. It is shrouded in mystery and the possible presence of military specialists from Russia in Sudan. In particular, the Western media attributed to certain private military companies participation in the suppression of opposition in the Sudanese capital Khartoum.

Therefore, it is possible that instructors from among former servicemen of the Russian army may go to Mozambique privately. But this is their own business. As for the use of employees of private military companies both for training African armies and for participating in hostilities, this is a very common practice.

PMCs from various countries operate in Africa - from the USA and Great Britain to China. And why, in fact, do Russian companies involved in the exploitation of gas fields in Mozambique not involve such structures to protect their facilities?

For Russia and Russian energy companies, joining Mozambique promises great benefits - this is the exploitation of gas fields, the supply of equipment, and the dispatch of specialists who can work on this equipment. All this is money, moreover, very large. As for the military presence, it is the most important guarantee of the safe implementation of Russian economic projects.

By the way, the presence of Russian warships in the ports of Mozambique allows you to control the southwestern part of the Indian Ocean. Mozambique may also be a Russian outpost upon penetration into neighboring countries of the African continent.