Deck Su-33 will not be able to give odds even F / A-18C. What happens to the Admiral Kuznetsov air wing?

October 2 2019
128
Undoubtedly, the statement published on the domestic military analytical portals by the head of the United Shipbuilding Corporation Alexei Rakhmanov about the beginning of a quick modernization of the shipyards of the 35 shipyard of Zvyozdochka TsS JSC for the subsequent docking of the modernized heavy aircraft carrier Admiral Kuznetsov allowed to breathe a thousand relief patriotic observers aware of the current problems of the Russian Navy at the present stage of its formation. 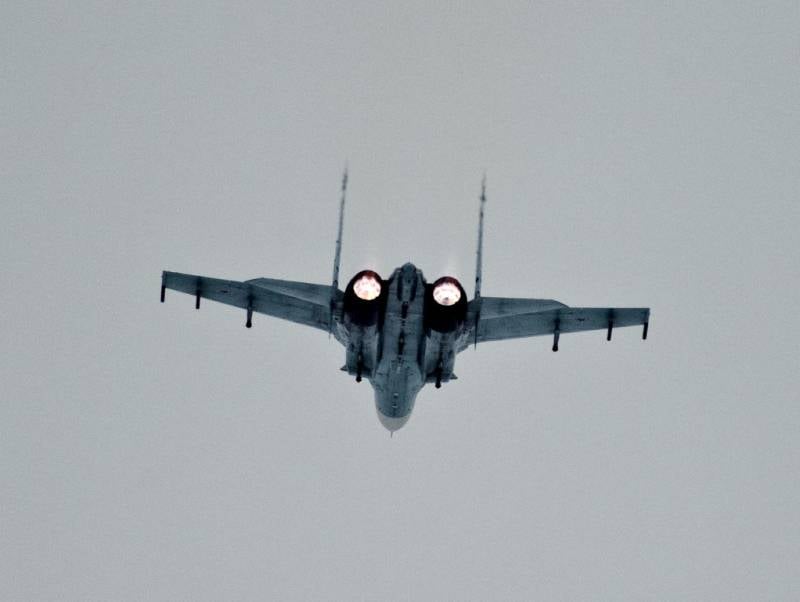 And this is completely unsurprising, because information about the accident that led to the loss of the PD-50 floating dock on the night of October 29-30, 2018, made the expert communities doubt the deadlines for the North the fleet the only Russian aircraft carrier that is one of the key links in maintaining the combat stability of CSF naval strike groups in the northwestern strategic direction (including the North Atlantic and the Barents Sea). Moreover, the transfer to Murmansk (via the Northern Sea Route) of the Fokino naval base based on naval base FD-41 is a real utopia both due to the terrible technical condition of the latter and the fact that this floating dock has practically exhausted its operational resource.

The only 279th OKIAP of the Northern Fleet faced both a quantitative and a technological lag behind the Su-33 and MiG-29K / KUB fleets from tactical aircraft armed with the U.S. Navy and ILC

Meanwhile, it would be very naive to believe that the timely completion of the overhaul and modernization of the TAVKR of 1143.5 Ave. “Admiral Kuznetsov” (with the final ceremony of handing over to the Northern Fleet in 2021 year) would be enough to eliminate all the gaps that somehow accompany such a deficit Russian Navy carrier component over the past three decades.

So, despite the re-equipment of the Admiral Kuznetsov by the naval commander-in-chief of the Russian Navy, Viktor Bursuk, announced by the unique ship-based ZRAK “Pantsir-M”, which in the future will allow to intercept four 3 fly targets simultaneously at a distance of up to 40 km by equipping standard 57EX6 solid rocket launchers with more powerful accelerators (booster steps), the air-defense potential of the 279 separate naval fighter regiment stationed on board the aircraft carrier still leaves elat better. Therefore, in a dueling situation today, the decked wing of our aircraft carrier cruiser is unable to form the proper A2 / AD anti-aircraft / missile zone in the radius of 700 — 1300 km.

And the root of the problem here lies not only in the fact that the number of carrier-based Su-33 carrier-based fighter interceptors / bombers and MiG-29K / KUB multi-functional fighters regularly aboard aboard Admiral Kuznetsov usually varies from 12 to 16 units. (3 — 4 units versus 12 units F / A-18E / F on board the Nimitz class nuclear aircraft carrier), but also in the multiple technological lag of the elemental base of the on-board radio-electronic equipment of the above-mentioned domestic carrier-based fighter aircraft from the electronic “stuffing” of state vehicles. In particular, the Su-33 and MiG-29K / KUB are still equipped with hopelessly outdated H001K airborne radar stations based on the Cassegrain antenna and Zhuk-M based on the slit antenna array.

The noise immunity of these stations is at a very mediocre level, which completely deprives the crews of the decked “Dryers” and “MiGs” of the ability to carry out operations to gain dominance in the air and intercept in the event of the enemy engaging in advanced electronic warfare systems such as the AN / ALQ- multi-range overhead container-based radio countermeasure system 249 NGJ-MB ("Next Generation Jammer Mid-Band") directional suppression or integrated complex electronic warfare AN / ASQ-249 "Barracuda" (included in the architecture of airborne defense systems of fighter F-35A / B / C).

The energy potential of the N001K and Zhuk-M radar systems, determined by far from the highest average and peak pulse powers, ensures the range of target capture with 1,2 square EPRs. m (target type "F / A-18E / F") of the order of 70 and 80 km, respectively. Against this background, the crews of the Super Hornets, using the powerful and more anti-interference AFAR radars AN / APG-79, will be able to take the Su-33 to escort at a distance of 180 — 200 km and to “capture” at a distance of the order of 150 — 170 km (in connection with an impressive EPR Su-33, reaching 15 — 18 sq. m). After that, long-range AIM-120D air-to-air missiles can be launched, the target designation of which will be issued via the protected radio channels of the Link-16 network either by carrier aircraft (F / A-18E / F) or by deck aircraft E-2D Advanced Hawkeye RLDN, so Super Hornet pilots do not even need to enter the radius of destruction of the R-27ER / EM aerial combat missiles (110 — 130 km).

Unfortunately, in this situation, the existing modification of the Deck Dryer does not have a single trump card in its arsenal that could be opposed to the F / A-18E / F - AIM-120D air defense decks, because the current SUV- weapon control system 27K does not have hardware and software adaptation for the use of modern guided air combat missiles RVV-SD and the “180 Product” (the latter is a conceptual analogue of AIM-120D) equipped with active-passive and active-semi-active radar seekers of the 9Б-1103М-200PA / PS family . This fact illustrates the extremely disappointing picture, according to which the Su-33 will not be able to work on remote air targets even by targeting from third-party radar and radio reconnaissance equipment (without using its own radar).

Three or four links of MiG-29K / KUB deck multipurpose fighters, equipped in advance with not only more advanced Zhuk-M radars, but also terminals with multiplexed data exchange channels MIL-STD-1553B and MIL-STD-1760, could partially save the situation. that would ensure the adaptation of the fighter armament control system to the use of both the already-armed VKS URVV R-77 and RVV-SD, as well as the promising 180 Product interceptor missiles.

But here, too, everything is not so rosy, because the Ka-31RLD helicopters of long-range radar detection stationed on board the Admiral Kuznetsov cruiser are equipped with the same old good E-801 "Oko" radar systems based on PFAR, whose range of operation for targets of the " Super Hornet "barely reaches 105 km, which is about 3,5 times less than the AN / APY-9 AFAR radars installed on American carrier-based E-2D Advanced Hawkeye AWACS. As a result of this, in carrying out air defense tasks, the deck-based MiG-29K / KUB will entirely and completely depend on the more "farsighted" A-50Y RLDN aircraft; and this means that there can be no talk of any self-sufficiency of the 279 OKIAP.

Another significant technological drawback of the H001K airborne radar of the Su-33 carrier-based interceptor fighter is the absence of the so-called bypass channel (auxiliary radar receiving path), designed to detect and track surface (surface and ground) stationary and moving targets in the modes of mapping the terrain synthesized by the terrain aperture (SAR), reverse synthesized aperture (ISAR) and direction finding of moving objects (GMTI). Conclusion: in performing air-to-surface missions, the Flanker-D decked aircraft looks extremely faded even against the backdrop of the F / A-18C / D carrier-based multirole fighter aircraft equipped with AN / APG-73 multi-mode airborne radars still in service with the US Navy slot antenna arrays and additional bypass channels for working on surface objects.

Even the F / A-33C / D “Hornet”, which underwent a program of deep updating of avionics, can be considered as a significant threat to the Su-18

Against this background, a diametrically opposite situation is observed across the ocean. According to the news and military analytical portal Warspot, with reference to the headquarters of the military-industrial corporation Raytheon and competent sources in the command of the US Marine Corps, armed with KMP Hornets, they will undergo a program of re-equipment for advanced airborne radars with AFAR AN / APG-79 (V) 4. These products can boast not only the above standard operating modes for ground targets (SAR, ISAR, GMTI), but also LPI modes (“Low Probability of Intercept”, “Low probability of interception”) and the so-called additional search during tracking during work on air targets.

The implementation of the LPI mode is achieved by means of AFAR radar emission of broadband complex-structured and varying in amplitude electromagnetic pulses, zeroing the probability of direction finding of this radar by obsolete warning stations about exposure to STR-15 “Birch” (installed on Su-33). The search mode during tracking is achieved by maintaining the spatial position of the scanning radar beam (in the elevation and azimuthal planes) even if the tracking target temporarily dived behind the radio horizon screen or hid in the folds of the terrain.

Therefore, when it reappears in the line of sight, the AN / APG-79 radar will be able to take it for accurate auto-tracking ten times faster and provide radio correction of the launched AIM-120D air combat missile, which can decide the outcome of an air duel at medium long distances. The pilots of our Su-33 can only dream of such abilities of the airborne radar system.

Meanwhile, the inner diameter of the Su-33 radar transparent fairing and the geometric parameters of its nose of the fuselage make it possible to integrate the most advanced PFAR and AFAR-RLS N011M Bars-R, H035 Irbis-E, as well as regularly advertised on the most famous Russian military-analytical sites Zhuk-AME radars, the transmit-receive modules of which are manufactured using the unique LTCC technology (low-temperature co-fired ceramics).