Historical detective. When nowhere to go, or Clash of the Titans over the sea

October 2 2019
46
Probably on that day, August 17 of 1943 of the year, the crews of British ships from a convoy traveling from Gibraltar to the UK watched one of the strangest events of World War II. 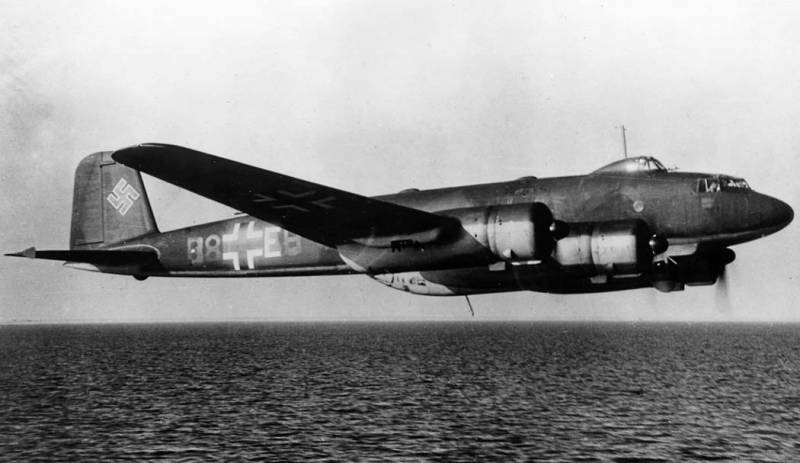 Three aircraft circled in a deadly duel, performing maneuvers, trying to get into each other's tail for the purpose of subsequent destruction.

In general, in the fifth year of the war this would not be surprising, especially since the fights over the convoys were ongoing. Especially over the likes of this one, which carried food to the British Isles. The Germans have always tried to make life difficult for opponents by sinking supply vessels.

The severity of the moment was WHAT planes fought in the sky! 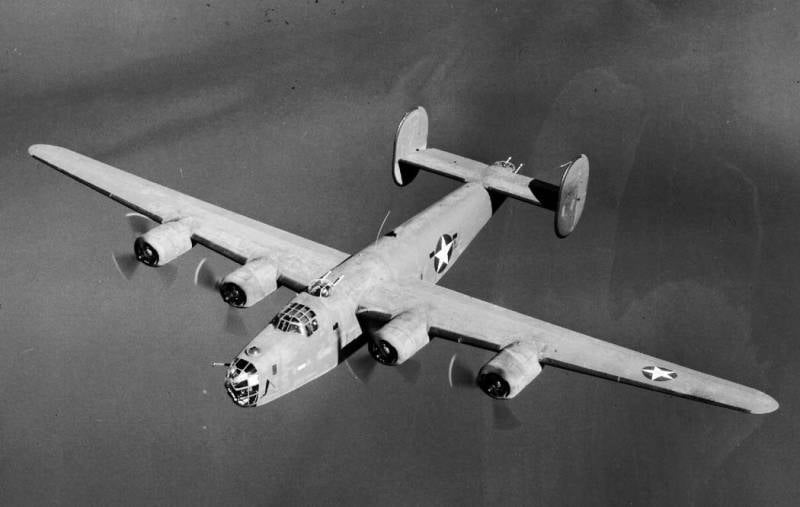 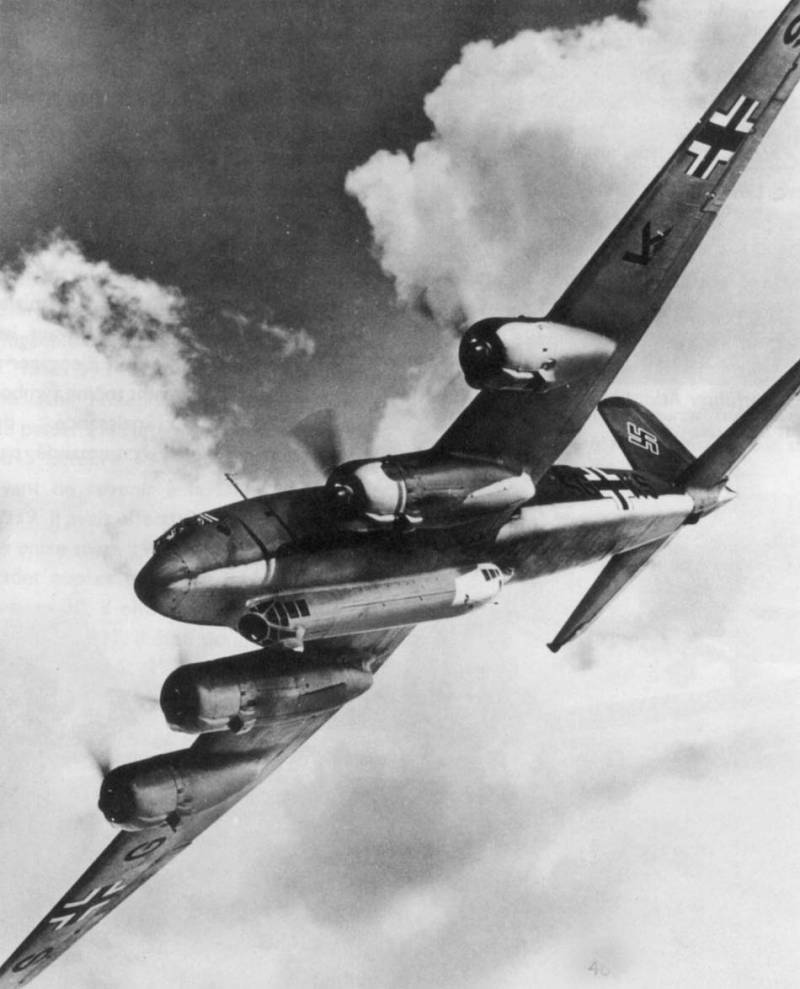 That is, can you imagine? Three four-engine monsters are circling in the sky, having arranged an air battle ... In general, it looks like an inflamed nonsense of an unscientific science fiction writer, but alas, the incident took place and was recorded by many documents.

It is a pity that there is no newsreel. I would look at such a show.

So let's go from the beginning.

The convoy was assembled in Gibraltar and went, as I said, to Britain with a load of food from the African colonies. 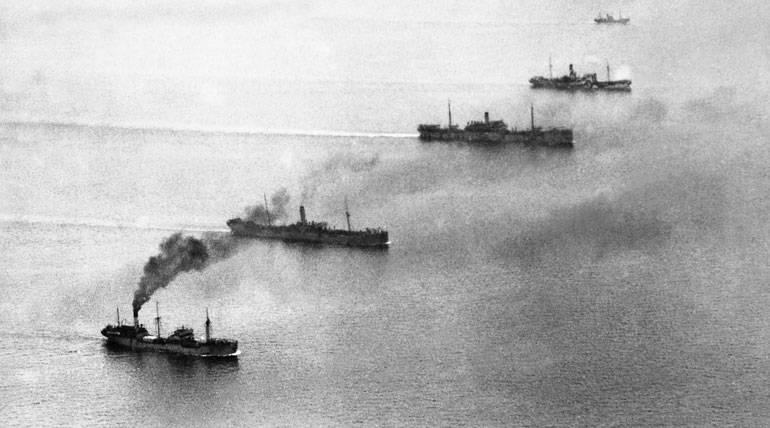 Now it is very difficult to say where the guard ships were and why it was not possible to cover the convoy with fighters. Apparently, he was small.

The British became aware that two Condors had flown out of Bordeaux to attack the convoy. Apparently, German planes were somehow spotted. In general, "Condor" - this is extremely unpleasant. Not only are bombs actually scary weapon Fokke-Wulfov - long-range radio stations, with the help of which submarines from Lorraine could be brought into the convoy. 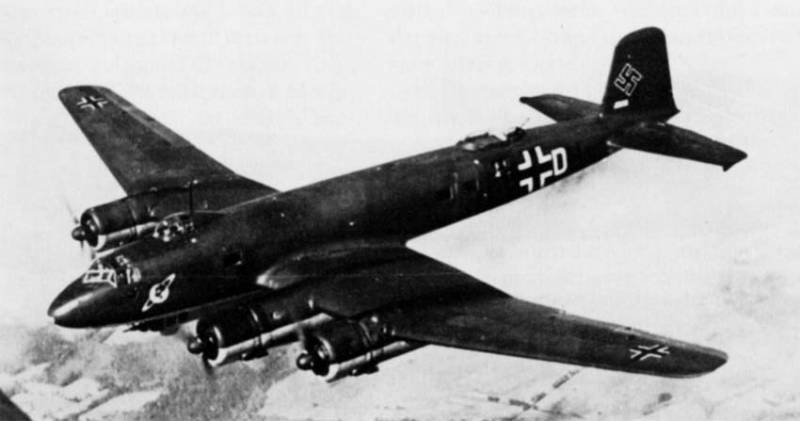 But all that could be opposed to the Germans was the only B-24D Liberator, and even a complete anti-submarine aircraft. The plane with the personal name "Ark" from the 480-th anti-submarine group flew from the base in French Morocco just to cover this convoy. 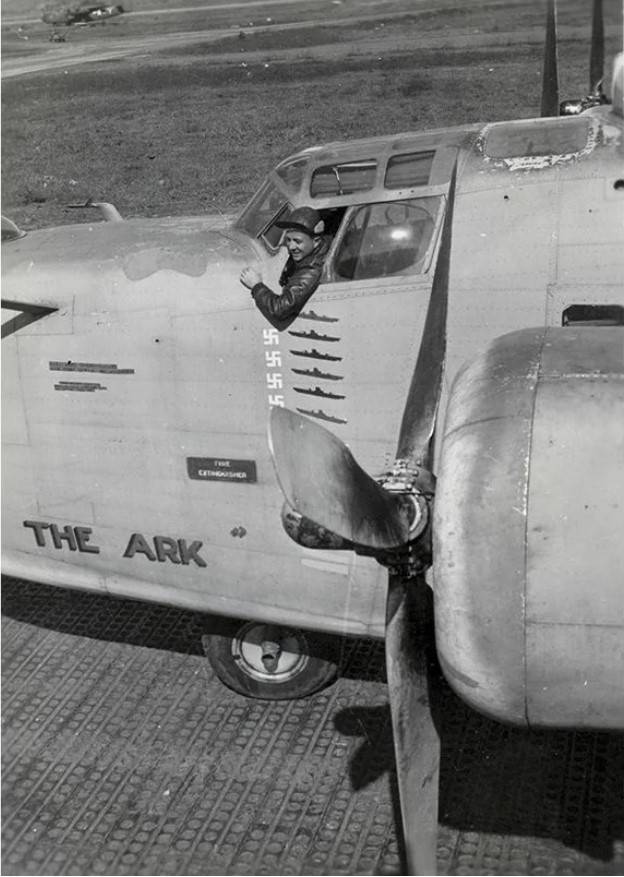 In general, the convoy was walking off the coast of Portugal, there was no one to wait for help in the air, since all countries were either neutral or (France) was already occupied by the Germans. The Condor pulled up from the north, clearly counting on a successful hunt, the Libererator flew from the south, and the planes met exactly in the convoy area.

With the Liberator, everything was more complicated. The aircraft for the search for submarines was made as light as possible by removing armor and firing points, and perhaps even less than its opponents were adapted for air combat. He had two or three 12,7-mm “Browning” in the front hemisphere, this was relatively enough to enlighten the fighter, who inadvertently appeared in front of the aircraft, but to qualitatively pick out an aircraft like “Condor”, perhaps this was not enough. The machine guns were not located very well, the only nasal machine gun was supplemented by two machine guns in ball mounts on the sides of the nose fairing, which did not have a positive effect on the accuracy of the fire. 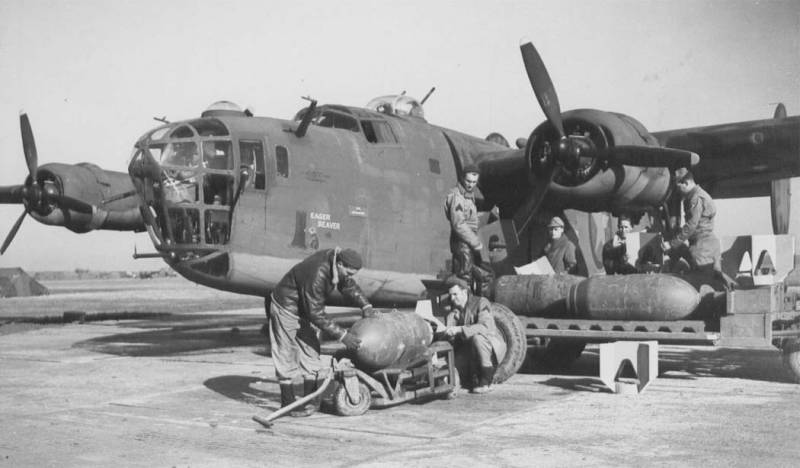 Well, and most importantly: pilot Hugh Maxwell, if he knew anything about the tactics of fighter air battles, is probably from the stories of pilots in the bar after flights. And Captain Maxwell was a bomber pilot, and that said, if not all, then a lot.

The crew called the plane "Ark", hoping that the aircraft, following the example of the biblical cargo truck, could survive in any mess. It almost happened, by the way.

And in the sky above the convoy, 140 miles off the coast of Portugal, the Titans came together: two Condor and one Liberator.

Probably, it is worth bringing the LTH of the aircraft further, just to have a completely finished concept of who played the "hawks" there. 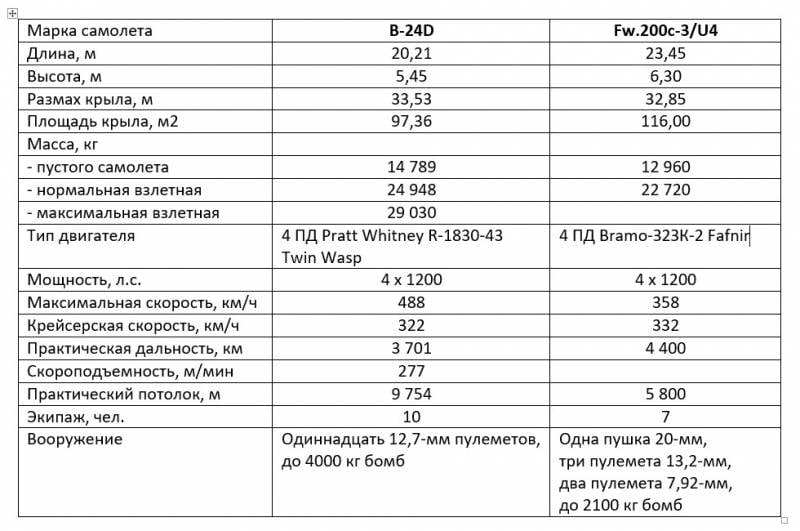 So, the "fighter" B-24 weighing 25 tons fell out of the clouds and began to try to get into the tail of one of the Focke-Wulfs. Since the Liberator was faster than the Condor, it almost worked out. But it was necessary to enter not just, but at an angle to use the side machine guns.

It is worth recalling that the effective range of the 12,7-mm "Browning" in the kilometer area, but in air combat, this distance was halved. So the B-24 began to reduce the distance, and the Condor’s crew, as expected, thrashed into the approaching “fighter” of all possible weapons.

But the Liberator, approaching the effective shooting distance, set fire to the Condor, and the Fokke-Wulf fell into the water.

But while the Americans were delivering the first Focke-Wulf, on the second they caught up with the mating pair and contributed. Obviously, the crew of the second German aircraft was more experienced, because in a very short time it deprived the Libererator of two engines on the right wing, which also caught fire.

Since there was no armor, the Germans quite badly damaged the plane inside. According to the crew, all the crew members received shrapnel wounds, internal radio communication was interrupted, the hydraulic system was disabled, even the dashboards were broken.

The Liberator fell as stately as it chased the first Condor. And while the plane crashed, his brave crew, desperately swearing, shot ammunition at the enemy. The intercom did not work, so no one heard the order to leave the plane!

And - lo and behold! - Still, the Americans finally managed to set fire to the offender one engine!

Well, then they all dispersed. The Americans flopped into the water near the sinking "Condor" No. 1, the second "Condor" with a mellow engine went towards France. Later it turned out that the crew was able to bring the American-perforated car to Bordeaux, but when landing, the plane crashed and burned down. The crew survived.

The Americans were picked up by British convoy ships, which desperate submarine hunters nevertheless defended. Including from submarines, which the "Condor" could easily lead from bases in the same France.

7 B-24 crew members from 10 survived. Four Germans from the crew of the first FW-200 were also lucky, they were also caught, and the war ended for them on this.

Epic case. Perhaps, probably, it was the only such “battle of the titans” for the entire war.

There were references to the actions of the Sunderland crews of the British Air Force Coast Command. The crews of these boats considered it quite normal for themselves to attack heavy enemy vehicles such as FW-200, BV-138, He-111. Eight machine guns in the nose, even a rifle caliber - that was the argument at the beginning of the war. 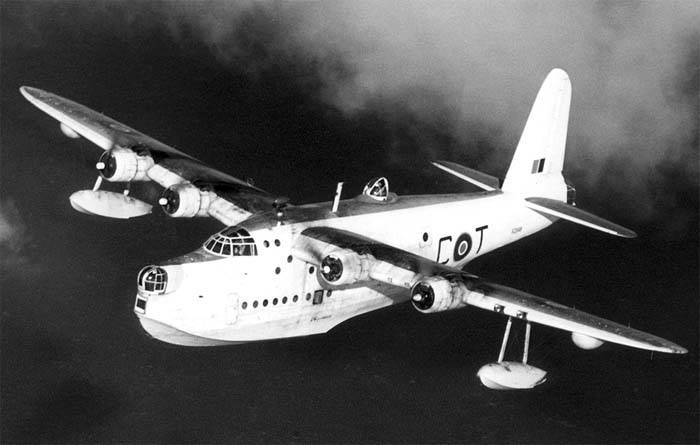 I read a story about such an incident when one patrol Sunderland attacked five He-111 torpedo bombers off the main group and dispersed them, knocking one down. The crew of the boat claimed that they didn’t have enough ammunition, and the Heinkels would have been bad at all.

Such bizarre grimaces are sometimes taken by the face of war.