The story begins with Dodge ¾

The very concept of an army car, which eventually crystallized in the GAZ-66, originates from the Lendliz truck Dodge WC 51 / 52. This machine had no analogues either in the Red Army or in the world. The main advantage was the universality of the machine, unique for those times - the size and thrust-weight ratio made it possible to use it without any problems as an artillery tractor, personal transport of high ranks, as well as an ambulance. However, the world war ended, the “cold” began, and the reserves of foreign equipment in the Red Army began to fade. 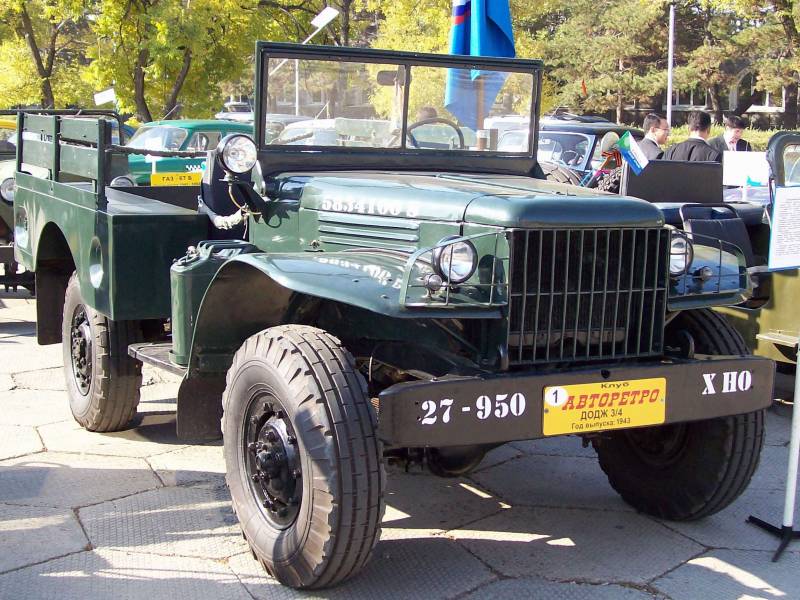 With a certain degree of conventionality, it was with the Dodge WC 51 / 52 that the GAZ-66 began its history

The first replacement of the American four-wheel drive truck was planned to make a bonnet GAZ-62 with a payload of 1,2 tons. It is noteworthy that with such an index at the Gorky Automobile Plant back in 1940 an experimental four-wheel drive gas engine was assembled, and our second stage of the GAZ-62 appeared 12 years later. Therefore, the main thing is not to get confused in them. The truck turned out okay and, perhaps, turned out to be much more harmonious than the younger brother of the GAZ-69, the work on which was going on in parallel. In some versions, the car was equipped with an onboard body and a winch, and in the craziest version with index B, it generally had eight wheels. 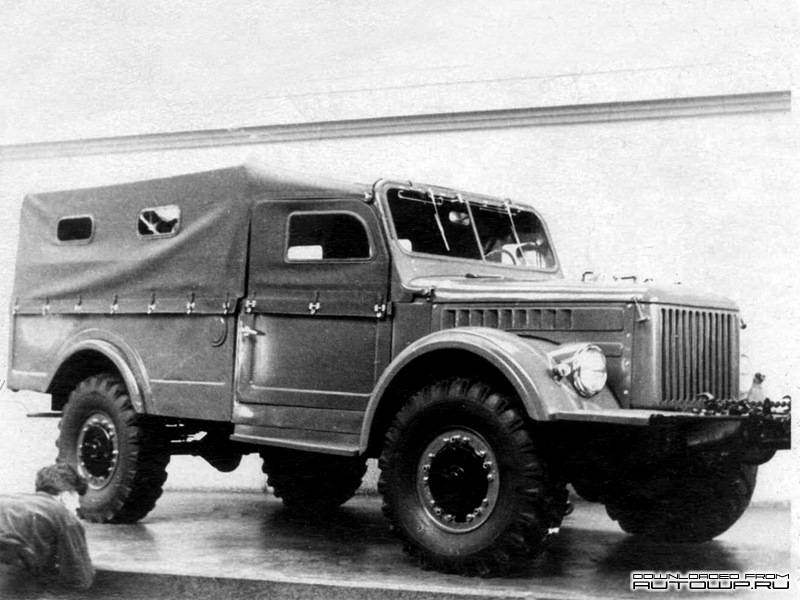 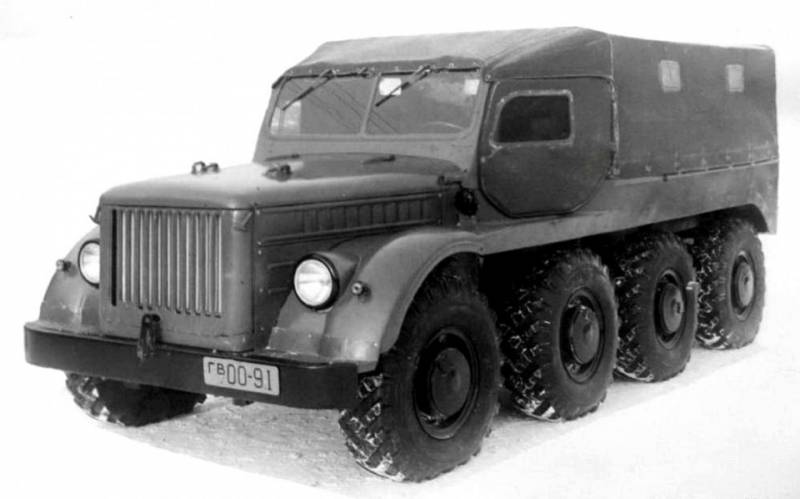 In total, the car accommodated 9 landing personnel plus a passenger with a driver and in all respects was a sufficiently advanced car for the beginning of the 50's. But unexpectedly, the Ministry of Defense changed the requirements for the 62 car, the project in its original form was closed and moved on to the topic of creating an airborne cabless truck. In fact, the niche of the “unpublished” GAZ-62 in the early sixties was later occupied by the UAV-451 cabless. Meanwhile, having lost nearly ten years, the Gorky designers started a new project, already seriously reminiscent of "Shishig". The main limiting factor was the size of the machine - it had to fit in the cargo compartment of the An-8 military transport aircraft. That is why it was necessary to place the cab over the front axle, which in the future will become almost the main drawback of the GAZ-66. 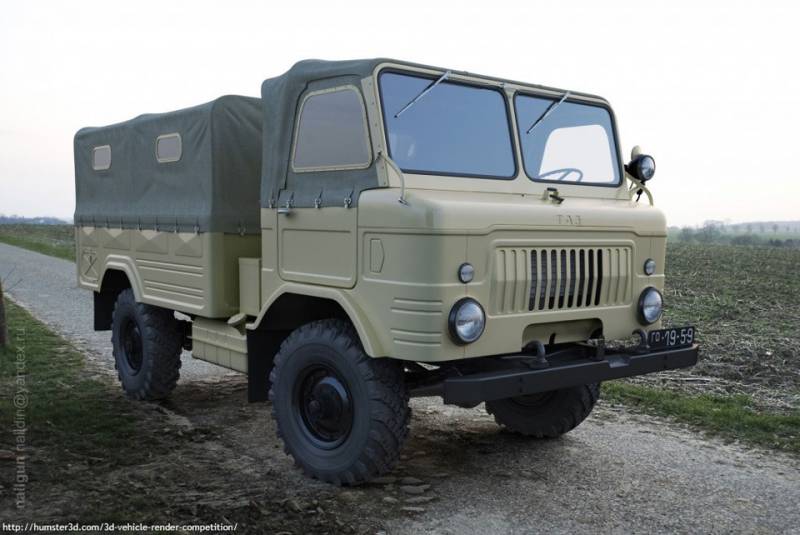 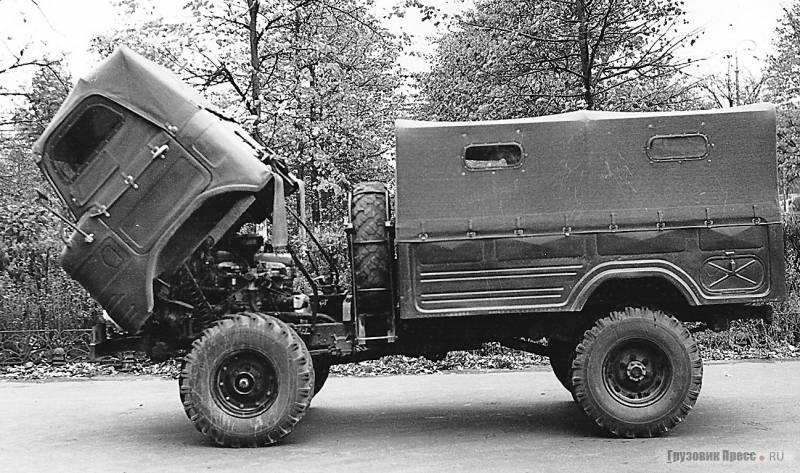 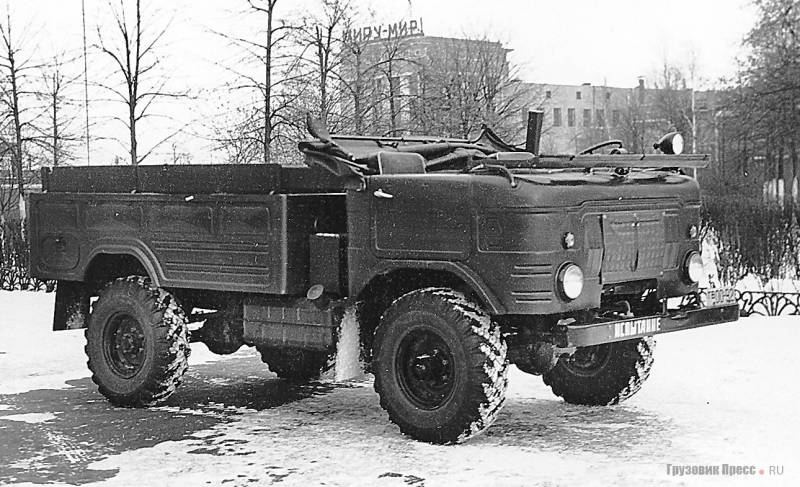 GAZ-62 of the last, third generation. It is not difficult to see the future 66 here. The first photo is nothing more than computer graphics - the “live” machines for posterity were not left

True, in those days it was difficult to assume that the nature of the wars of the future would be mainly partisan with a wide spread of mines and IEDs. As a result, the dimensions of the second iteration of the GAZ-62 (or the third one, the main thing is not to get confused) had to be reduced, the entire top of the convertible type should be made. The windshield, side windows and a tarp roof were folding, allowing the car to fit in the An-8. In the book “Automobiles of the Soviet Army 1946-1991”, automotive historian Yevgeny Kochnev writes that if for the GAZ-62 from the 1952 of the year, the mentioned Dodge WC51 / 52 can be considered the prototype, for the 62 truck of the 1958 model of the year, German Unimog became a reference point. Indeed, some layout decisions are visible both at GAZ-62, and at its successor GAZ-66. Later in the Soviet Union, even comparative tests of the Shishigi and the German car were carried out. 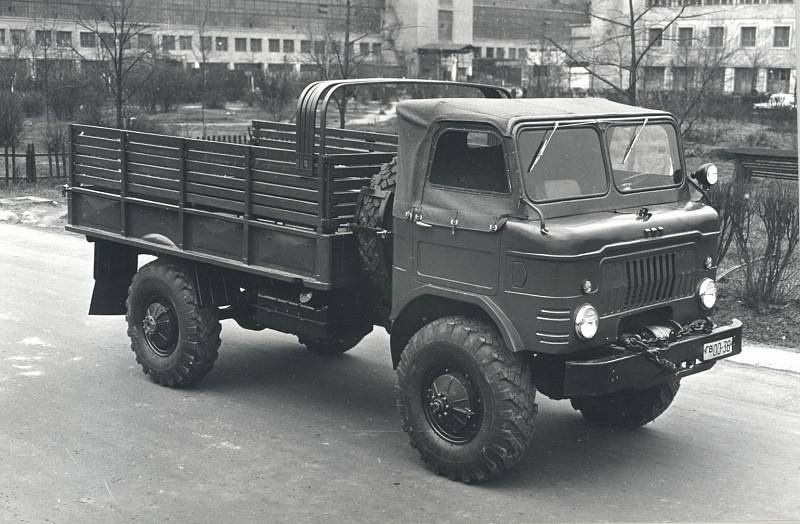 Still, you can’t call Unimog and GAZ-66 classmates - the domestic truck was designed primarily as a purely military vehicle (by the way, the 66 was the first of its kind), and the “German” was primarily a civilian vehicle, similar in functionality with a tractor.

But back to the GAZ-62, which in the end the military department was dissatisfied with, despite being accepted into production. The car has already managed not only to settle on the conveyor (69 trucks were produced), but also to get into the Domestic Cars directory with the expectation of being used in the national economy. The 62 index for GAZ in general became unhappy - three cars at different times were out of work, and the last cabover version was not even bothered to even be kept in the factory museum. The new truck, which replaced the galaxy of unsuccessful ones, was assigned, as it turned out, the much happier 66 index, which glorified the Gorky Automobile Plant all over the world.

Since the end of the 66 of the year, the chief designers of the 1957 GAZ has been Alexander Dmitrievich Prosvirnin, who, in addition, led the development of almost all the cars that are symbolic for the automobile plant - from GAZ-53 to GAZ-14 Chaika. What's new Prosvirnin implemented in the project of a light army truck-tractor? First of all, the car increased in size, obviously, due to the appearance of new An-12 military transport vehicles with a larger cargo compartment capacity - after all, air transport was put in the first place by the Ministry of Defense. 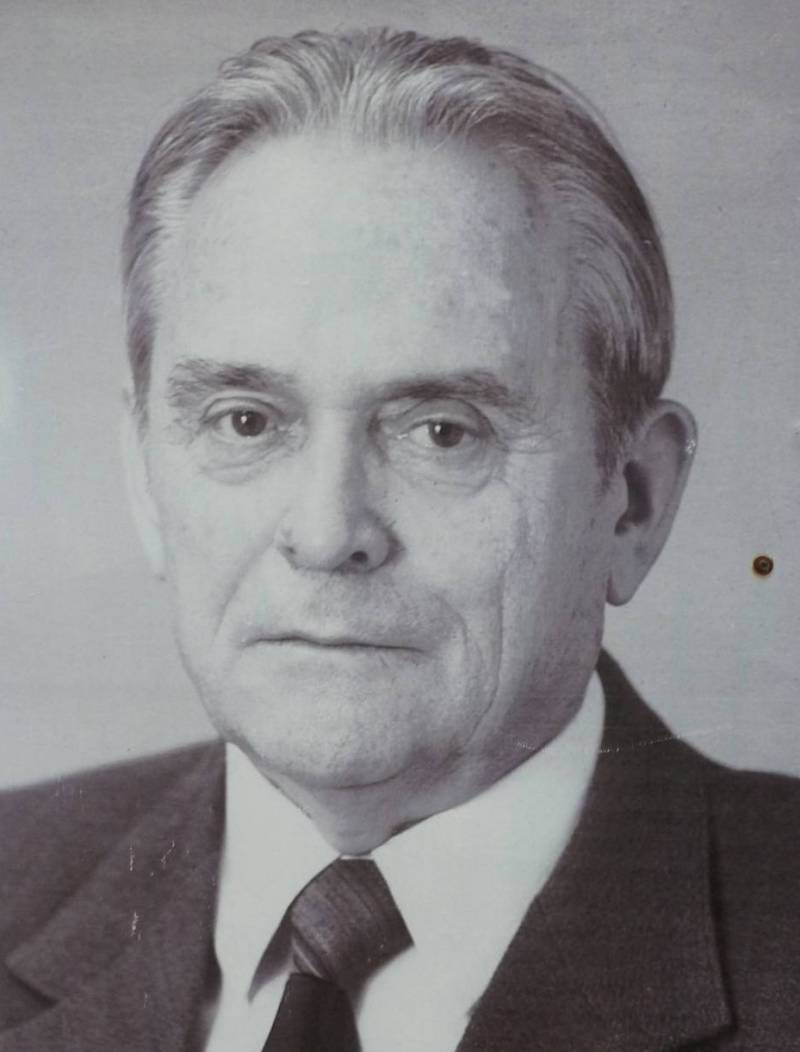 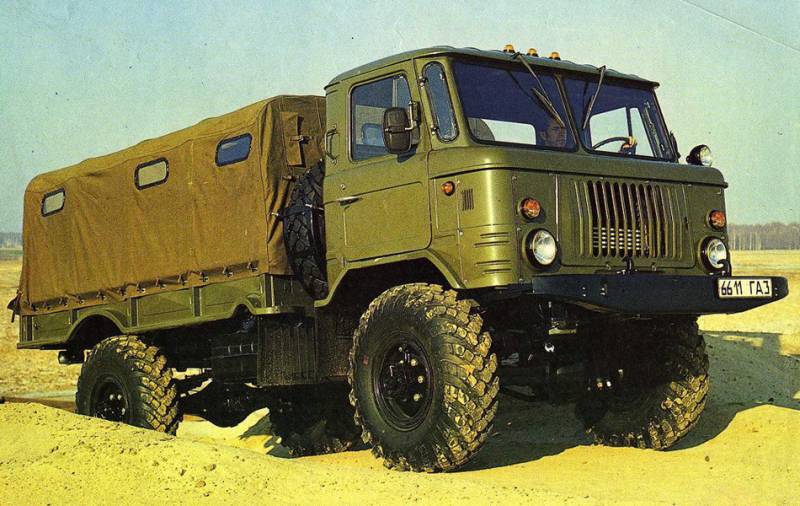 Chief Designer Alexander Prosvirnin and his brainchild in a model photo

Further, "Shishiga" received a very high specific power - about 33 liters. s / t, which was almost a record for production cars. This was largely ensured by the 8-cylinder engine ZMZ-66, with an output of 115 l. pp., designed specifically for the new Gorky truck. The highest cross-country capacity among all serial trucks of the Soviet Union at the beginning of the 60's “Shishiga” was achieved with the introduction of cross-axle limited-slip limited-slip differentials on both axles, as well as a centralized tire inflation system. By the way, the design of "self-blocks", our engineers spied on German all-terrain vehicles during the war and after, with significant modifications, developed their own mechanism. The almost standard distribution of axle weights on a loaded vehicle, 66% / 50%, also played a role in favor of the off-road capabilities of GAZ-50. 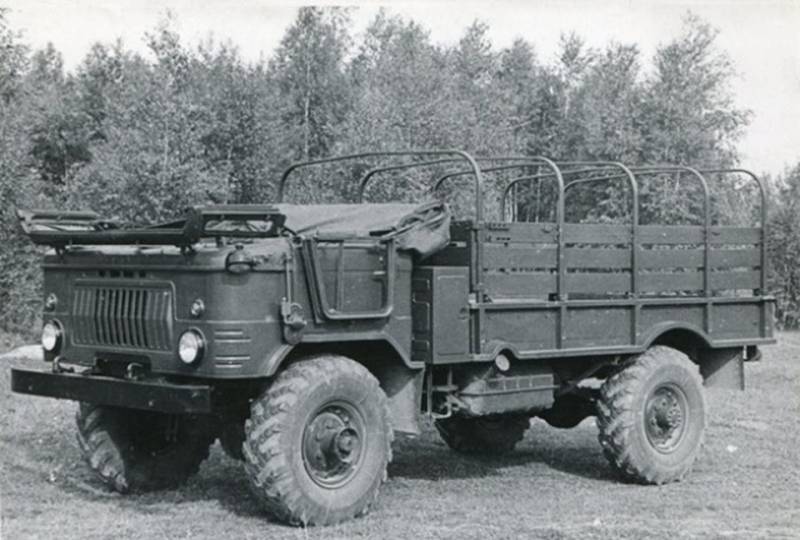 The first real production GAZ-66 (the experimental batch of the car was assembled in early November of the 1963 of the year) was born on the 1 of July of the 1964 of the year and five years later it was the first among Soviet cars to receive a prestigious quality mark. True, evil tongues claimed that there was no particular benefit from this - for example, during the control tests at the NIIII-21 training range of the Ministry of Defense, a sign defect was recorded - "rust leak from under the quality mark."

In 1971, the ZMZ-66 gasoline was awarded with a similar distinguishing mark confirming the high quality of workmanship. Initially, the GAZ-66 range included a variant with the letter B for the Airborne Forces, which differed in the mentioned hinged windshield and fabric roof. When loading onto the landing platform, the P-7M or PP-128-5000 had to fold the cabin flush with the wooden sides of the body and lower the wheels. In addition, the seatbacks lowered together with the telescopic steering column. It was a unique design that had no analogues in the world at that time. GAZ-66B was able to withstand overloads up to 9g when landing with four- and five-domed parachute systems, while the fuel tank, sanitary module, multiple launch rocket system and, attention, sections of the DPP-40 pontoon park were mounted on the chassis. However, with the advent of the Il-76 and especially An-22 aircraft at the Air Force, the need for a complex folding structure disappeared and at the end of the 70's the machine was discontinued, replacing the usual GAZ-66 with a steel cabin. By the way, version B was developed at the Experimental Plant No. 38 MO in Bronnitsy, and produced at one of the repair plants. 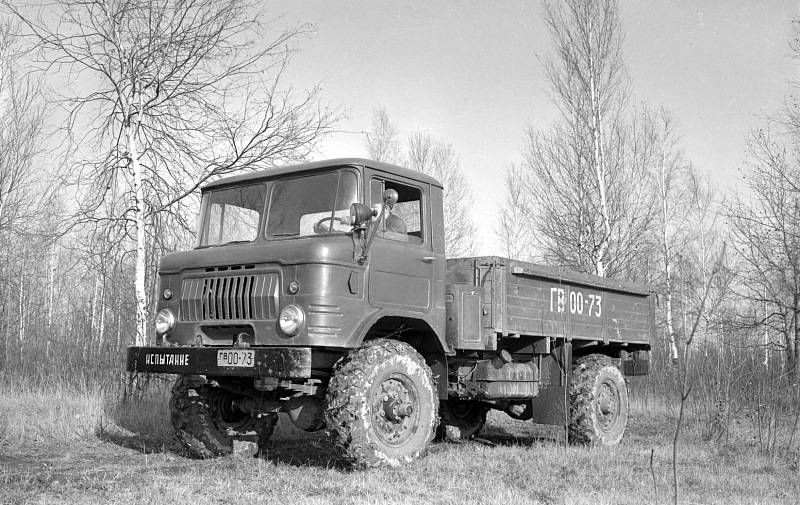 GAZ-66 experimental batch with the "early" performance of the windshield. The curved side sections and the wooden body are still preserved. 1960 year 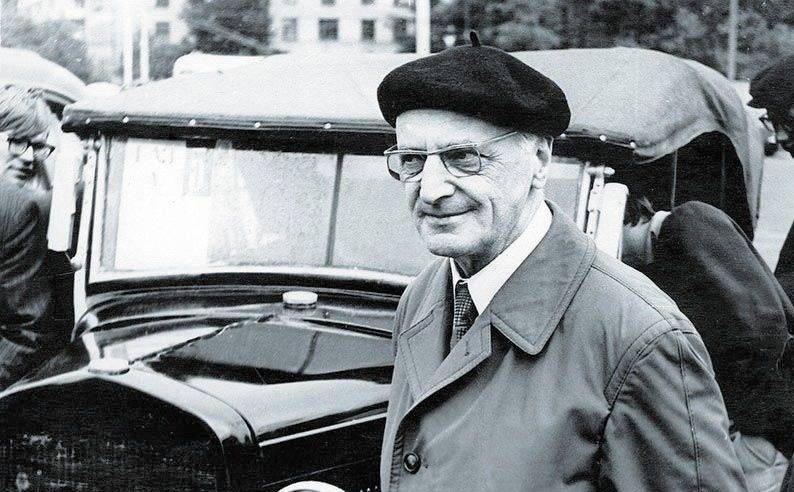 The characteristic and recognizable appearance of the GAZ-66 truck was designed by Lev Mikhailovich Yeremeyev, the designer of the Gorky Automobile Plant, who applied talent to many masterpieces, including ZIL-111, GAZ-21 and GAZ-14. Initially, Yeremeyev was faced with the task of providing good visibility to the driver, for which the first prototypes had a windshield with bent side sections. But according to the requirements of the Ministry of Defense, they were replaced by characteristic windows, which became real highlights of the 66 machine. So there was no need to make complex bent glass and the procedure for replacing broken glass was simplified.

The new GAZ-66 immediately became a bestseller in the Soviet Army - the truck quickly replaced the GAZ-63 and became the main light truck of the armed forces. Ahead were countless modifications, experiments and difficult service in combat conditions.