The era of import substitution. How the Soviet Union learned to do tanks

In the arsenal of the army of the Russian Empire during the First World War, there were a limited number of types of tractor equipment, among which one can distinguish the fully tracked heavy Holt-Caterpillar and the Allis-Chalmers semi-tracked tractor truck. These vehicles have largely become the prototypes of future self-propelled armored vehicles, but in Russia no steps have been taken to introduce the production of such equipment. Only on the Allis-Chalmers base were two armored tractors Ilya Muromets and Akhtyrets (later Red Petersburg) developed by the artillery colonel Gulkevich made. Half-tracked "Akhtyrets" and "Muromets", according to the historian of armored vehicles Mikhail Kolomiyets, can generally be considered the first Russian tanks, albeit on foreign units. At the same time, they even surpassed similar French-made cars in some parameters. Of course, it is impossible to talk about any kind of influence of two operating machines on the course of hostilities of the fronts of the First World War. 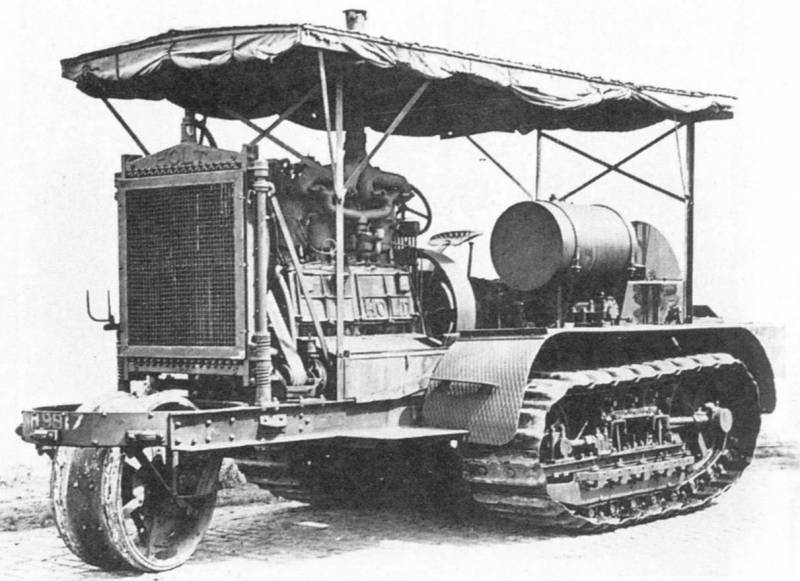 However, the tsarist government, to the best of its ability, nevertheless spent money on promising developments — we all remember Lebedenko’s wheel tank, terrifying in size, (Tsar Tank).

In the post-revolutionary time, in the turmoil of the Civil War, we managed to make only 15 copies of the “Russian Renault” (a copy of the French Renault FT) on our own - this was the first domestic tracked vehicle assembled from scratch. And only in 1926 was the first three-year plan for the development of tank construction in the USSR drawn up, one of the first products of which was the T-12 / T-24. This unsuccessful tank was released in a scanty circulation in the 24 instance and, according to some historians, was developed under the influence of the American T1E1. At the end of the 1920's, domestic designers made another attempt - they built two prototypes of light T-19 infantry support tanks. Among the novelties in the car, chemical protection was implemented weapons, the ability to overcome water barriers with pontoons, as well as a special way to overcome the moat with the help of a rigid coupler of cars. But it was not possible to bring the tank to readiness for mass production. 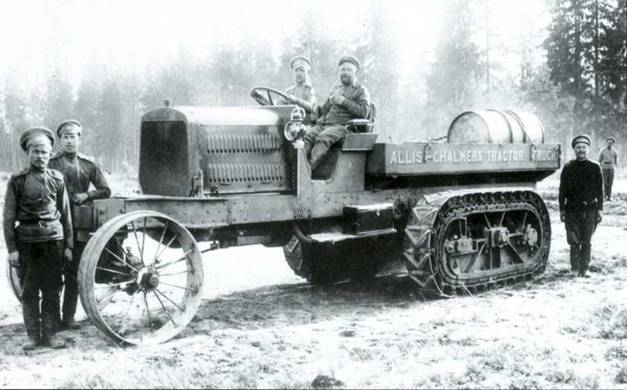 Allis-Chalmers, armored in the Russian Empire. The photo shows the post-revolutionary version of "Red Petersburg"

In February 1928, the Kremlin spent 70 thousand dollars on the German designer Joseph Volmer, who was supposed to develop a light tank project weighing up to 8 tons for the USSR. They asked Volmer for a reason - he was the one who was developing the famous German A-7V, as well as the kids Leichter Kampfwagen. The design proposed by the German engineer was not implemented, but served as the basis for Czech KH tanks, as well as the Swedish Landsverk-5 vehicle and the Landsverk La-30 tank. With a certain degree of certainty, we can say that Soviet dollars paid for the appearance of the tank industry in Sweden - Volmer later sold many of the developments in the USSR in a Scandinavian country. 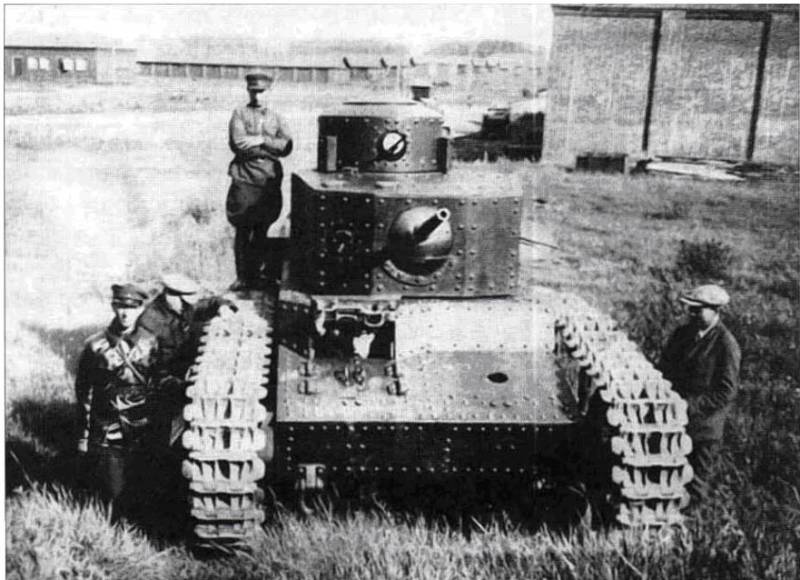 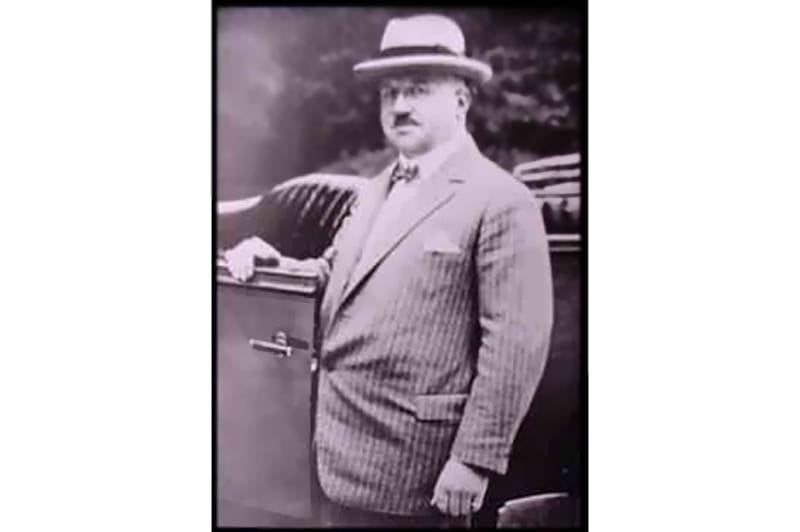 In parallel with the development of new equipment, in November 1929, the “Department of Mechanization and Motorization of the Red Army” was created under the leadership of Innokenty Khalepsky. In tsarist Russia, Halepsky worked as a telegraph operator, later led communications in the Red Army, and the peak of his career was the post of Commissar of Communications of the USSR. Convicted of conspiracy with the Nazis and shot in the 1937 year, rehabilitated in the 1956 year. And at the end of November of the 1929 of the year, Khalepsky made a landmark report at a meeting of the Board of the Main Directorate of the Military Industry, in which he raised the question of the serious lag of the domestic tank construction from the foreign one. Like, they themselves tried, but failed, it is time to turn to the West for help. Halepsky was then heard, and on December 5 of the 1929 of the year, the Politburo of the Central Committee of the All-Union Communist Party of Bolsheviks decided to invite foreign designers, send their own engineers for an internship, purchase tanks and related licenses, and receive technical assistance from foreign companies. 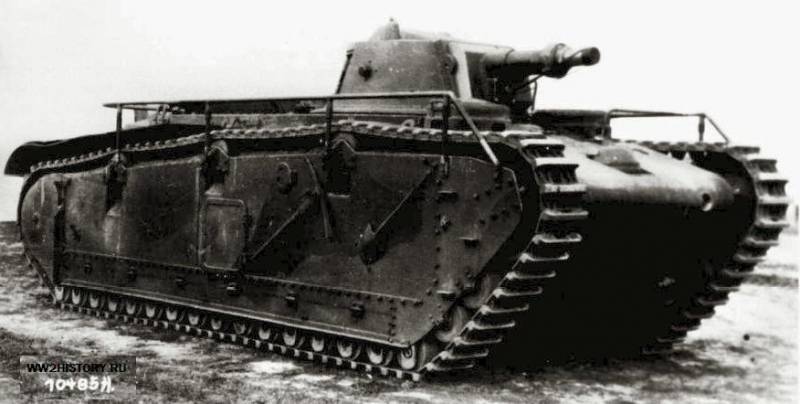 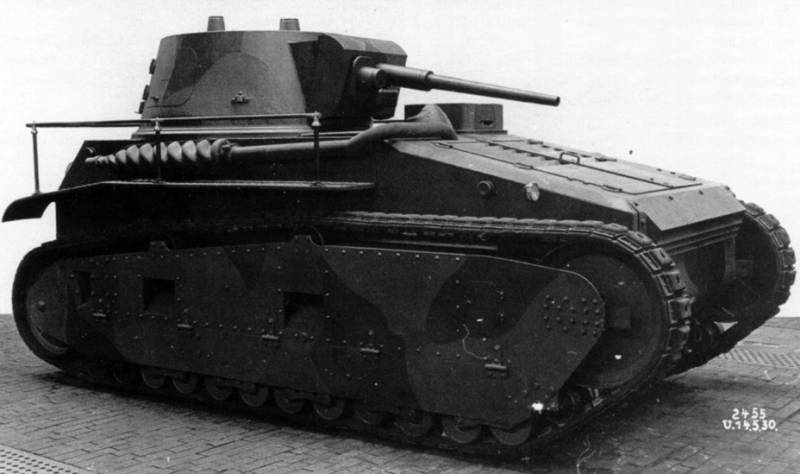 At that time, the Soviet Union already had the first achievements in generalizing foreign experience. So, in the Soviet-German tank school "KAMA" (Kazan - Malbrandt) experienced tests were conducted by Grosstraktor and Leichttraktor, which Russian tankers also met. The developments on these machines were used by domestic designers to create the amphibious tank PT-1.

December 30 1929 of the year Innokenty Khalepsky together with a team of engineers went on a “tour” with a visit to Germany, France, Czechoslovakia, Italy, the UK and the USA with the aim of purchasing samples of armored vehicles, as well as the possible placement of orders. After an unsuccessful visit to Germany, the delegation went to the British company Vickers, which at that time held the palm in the world tank building. Initially, the Halepsky team had a cunning plan for the purchase of four tanks in single copies with the provision of full technical documentation. It was supposed to buy from the British the Carden-Loyd wedge, the Vickers 6-ton light infantry support tank, the Vickers Medium Mark II medium 12 ton and the A1E1 Independent heavy. Of course, this did not suit the British, and the first stage of the negotiations ended in nothing. From the second call, our delegation already had a larger amount, and Vickers sold the USSR 20 tankettes, 15 light tanks and from 3 to 5 medium tanks (data vary). The A1E1 Independent, which at that time was in the status of an experimental car, the British refused to give (by the way, he didn’t go into series), and they proposed to build a “turnkey” new tank, but with the purchase condition, 40 Carden-Loyd and Vickers 6-ton. The Soviet side did not like this option with a heavy machine. 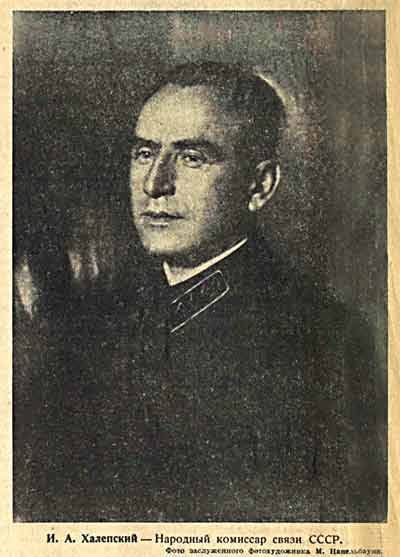 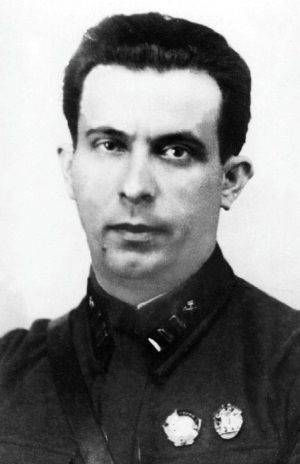 I must say that in the delegation of Halepsky as his deputy was Simon Ginsburg, a graduate of the Military Technical Academy. Dzerzhinsky, responsible for the technical side of the negotiations. In the future, he will become one of the leading designers of Soviet armored vehicles, and in 1943, he will be sent to the front in punishment for the unsatisfactory quality of the new SU-76 self-propelled guns, where he will die. And in the UK, in the Halepsky team, he tried himself as a scout. During the inspection of the equipment of interest at the Ginzburg training ground, I saw the latest 16-ton and three-tower Vickers Medium Mark III. Naturally, the engineer wished to get to know him better, but was refused, they say, the car is secret and all that. Semyon Ginzburg was not at a loss and, with a blue eye, reported to the unidentified British testers that the car had already been bought by the Soviet Union a long time ago and now all documents were being drawn up. We managed to inspect the car, fix all critical parameters and create the T-28 in the USSR “from memory”. By the way, the general concept of the A1E1 Independent, which was not sold at the time, was the basis of the heavy T-35. Vickers 6-ton became, as you know, T-26, and Carden-Loyd was reborn into T-27. Such is the "import substitution." 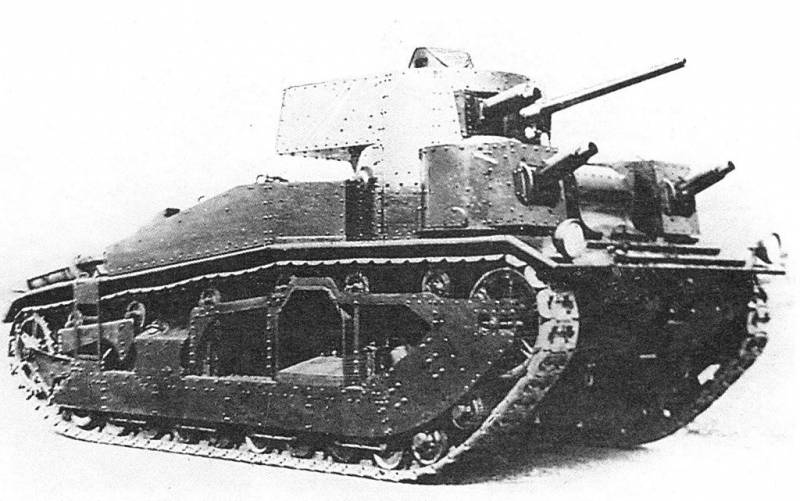 After Great Britain, the Halepsky delegation left for the United States to study the issue of purchasing a copy of the mentioned light tank T1E1 Cunningham, of course, with all the documentation. However, firstly, the car was not so good at work as the Americans advertised it, and secondly, the Yankees set up conditions that were very unfavorable for the USSR. The contract for the purchase of 50 tanks with a prepayment of half of the cars was immediately rejected, and Halepsky's eyes turned to the cars of John Walter Christie. The characteristics of the M1928 and M940 machines were striking - the then-fashionable wheeled-tracked track and the maximum speed of 100 km / h were ideal for the offensive war strategy that prevailed then in the Soviet Union. Christy in 1931 year for 164 thousand dollars sold, in fact, everything on this project - two copies of the tank with documentation, as well as the right to manufacture and operate the machine within the Soviet Union. Very successful for Walter Christie turned up negotiations with the Poles, also wanting to buy tanks. This made the Halepsky delegation much more accommodating - no one in the USSR wanted to give American cars to a potential enemy. 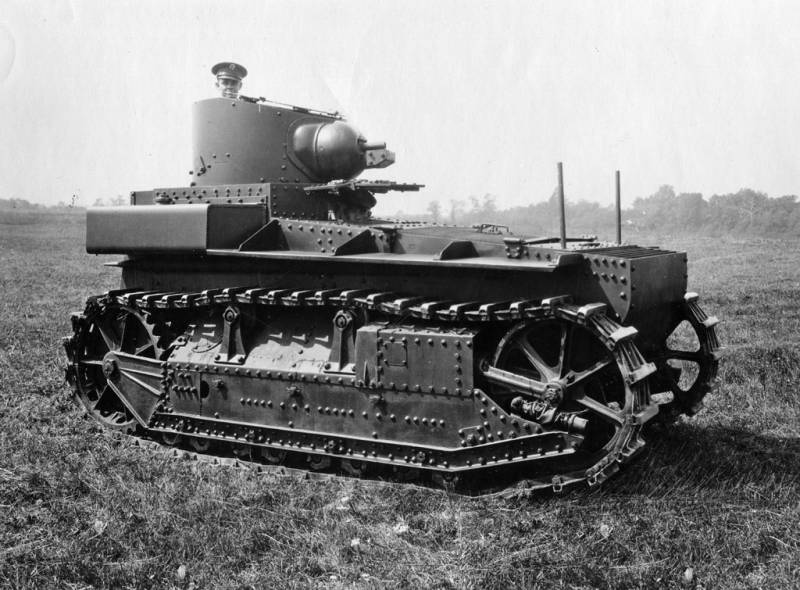 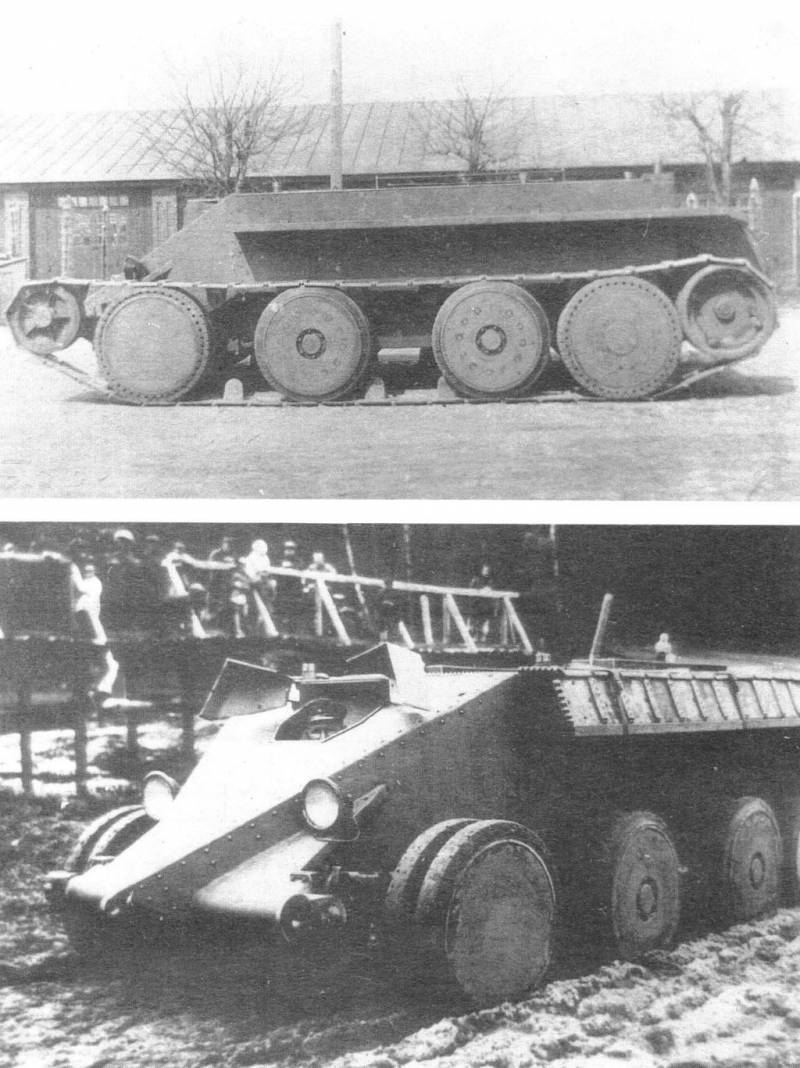 After the USA, there was France and negotiations with Citroen on assistance in the production of a GAZ-AA truck with the Kegresse half-tracked engine - in the USSR there were problems with the development of such a complex unit. Khalepsky asked according to the old scheme to sell a couple of cars with a mover and a full set of documents, as well as help in organizing production. But the French agreed only on large deliveries of half-tracked vehicles, and refused to request a new tank. The delegation also expected the same outcome in Czechoslovakia - no one wanted to sell single cars together with a full package of documents. But in Italy, with the company Ansaldo-FIAT, the Halepsky team managed to find a common language and sign a protocol of intent in the joint construction of a heavy tank. I don’t know, fortunately or unfortunately, but this protocol remained the protocol - heavy tanks in the Soviet Union had to be developed independently.