29 September 2019
33
Russian frigate of the Black Sea fleet "Admiral Makarov" arrived on the Greek island of Kerkyra (Corfu) to participate in the events of "Russian Week". The ship’s visit to Greece aroused great interest among the Greeks. This was reported by the press service of the Russian Defense Ministry. 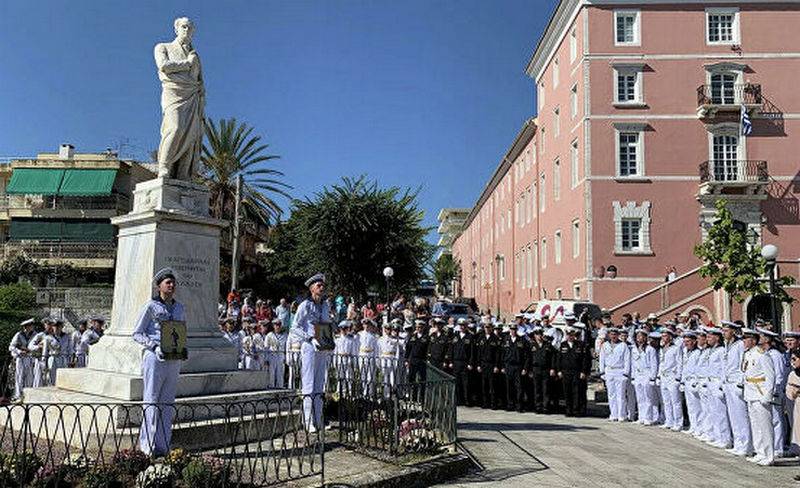 The frigate of the Black Sea Fleet "Admiral Makarov" arrived on the Greek island of Kerkyra under the flag of the commander of the Black Sea Fleet, Vice Admiral Igor Osipov. The crew will take part in the annual events of the Russian Week, held in memory of the great Russian naval commander Fyodor Ushakov, whose squadron knocked out Napoleon’s troops from the Greek island of Kerkyra (Corfu) in 1799 and liberated the other Ionian islands. The events will last until October 2.

According to officers from the crew of the Russian frigate, the visit of the ship aroused great interest among the Greeks. If on the day of arrival the ship was visited by a little more than 200 people, then on Sunday morning in the first hour only about a hundred visitors visited the frigate. People go with their whole families, with children, on the ship, officers conduct excursions along the upper deck, talk about its weapons and characteristics.

We have a Russian ship here. Tomorrow I’ll definitely go see. Last year, the Russians did not come
- said a local resident, adding that he visits Russian ships every time they come to the island.

Recall that after the liberation of the Ionian Islands by the squadron of Fyodor Ushakov, the Republic of Seven Islands was formed on their territory, the first Greek state created after the fall of Constantinople in 1453. The republic included the islands of Kerkyra, Paxos, Lefkada, Kefalonia, Ithaca, Zakynthos and Kitira, it lasted seven years from 1800 to 1807 for a year under the cover of the Russian fleet, after which it passed under the French, and then the English protectorate, where in the 1815 year it lost independence.