Tonka the machine gunner. The executioner woman, who was calculated by chance

30 September 2019
85
In September 1978, the inspector of the garment factory, Antonina Ginzburg, went on business to the personnel department. But right on the street, people in civilian clothes approached her. An inconspicuous elderly woman was detained, which she herself was not at all surprised. Thirty-three years Tonka the machine gunner was waiting for this to happen. 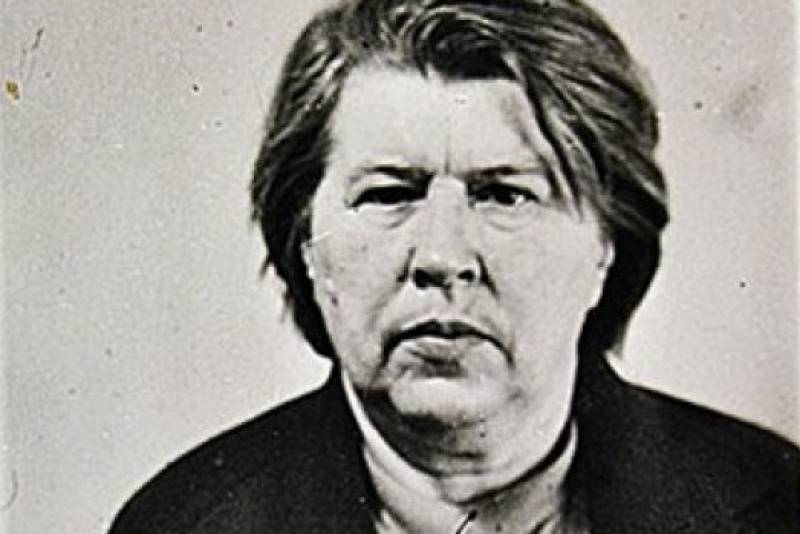 Only a year lasted the so-called. The Lokot Republic, a semi-autonomous territory in the rear of the Wehrmacht, which included eight regions of the Oryol, Bryansk and Kursk regions occupied by the Germans. Here, in the summer of 1942, the Hitlerites launched a “test project” to create a self-governing structure for the future Muscovy Reich Commissariat. Lokotsky self-government was headed by the famous collaborator Bronislaw Kaminsky.

A former member of the CPSU (b), expelled from the party in 1935 for criticizing collectivization, Kaminsky served the link several times. The last place where he was exiled at the beginning of the 1941 year was the village of Lokot, then belonging to the Oryol region (now it is part of the Bryansk region). Here Kaminsky worked as a chief technologist at a local distillery. 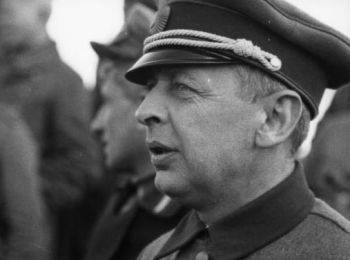 4 of October 1941 of the year The Nazis occupied the elbow. Kaminsky immediately went over to the side of the invaders and was appointed deputy mayor of Constantine Voskoboinik. At the same time, he became Voskoboinik's deputy in the last created by the People’s Socialist Party of Russia. The Russian Liberation People's Army (RONA) was also formed, whose units participated in counter-guerrilla raids of the Nazi troops. When Konstantin Voskoboinik was mortally wounded by partisans, Kaminsky was succeeded by him as the mayor of Lokotsky self-government.

At the beginning of 1942, a young girl appeared in the Loktya region. Her name was Antonina, Tonya. She was only 22 of the year - Antonina Makarovna Makarova, whose last name was actually Parfenova or Panfilova, was born on 1 on March 1920 of the year in a large peasant family. For some reason, at school, the teacher, without checking, wrote down Parfenova (Panfilova) Makarova - by patronymic. Tonya received a passport for this surname, and then a Komsomol ticket.

When the war began, the girl went to the front as a volunteer. She served as a barmaid and a nurse in the Red Army, during the Vyazemsky operation she was captured by Germany, but fled and wandered through the forests for several months with her companion, Red Army soldier Nikolai Fedchuk. But then the couple went to the village of Red Well, where Fedchuk lived a family. There, the Red Army soldier left Tonya and the girl hung around for some time in the village, engaging in prostitution. In the end, dissatisfied rural residents escorted the damsel from the Red Well and Tonya ended up in Lokot, where she continued her previous occupation from hopelessness.

There, in Lokta, Tonya Makarova came to the headquarters of collaborators Bronislaw Kaminsky. German officers at the Lokot auxiliary police offered Tony a salary and a room at the local stud farm. But it was required to enter the service and perform special tasks - to shoot the arrested and prisoners. Tonya agreed. She was handed a machine gun and was pumped with vodka before the first shooting so that it would not be scary. But for the second time, Antonina did not need to drink alcohol before the execution of any innocent Soviet people.

To understand the scale of the terror unleashed by the traitors led by Kaminsky on the territory of the Lokot Republic, it’s enough to indicate that the “suicide bombers” were sent to Antonina by groups of 27 people almost every day. Sometimes Antonina, who was called the “Tonka-machine gunner” in the Lokot auxiliary police, had to fulfill her bloody duty three times a day.

Among those who were shot were partisans who fell into the hands of the Germans, members of their families, as well as just civilians, who were executed for the smallest offenses or for intimidation. Makarova did not disdain that after the execution she removed from the corpses her favorite items of clothing. In total, Tonka the machine gunner shot about 1500 people.

The heavy service of the executioner forced Tonka the machine gunner to seek solace in alcohol. 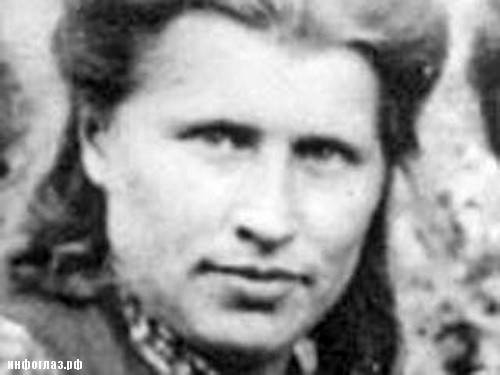 Having fulfilled her official duties, she went to a local club, where she drank with German soldiers and “earned money” as a prostitute. There Tonka the machine gunner became infected with syphilis. When the executioner's disease became known, the Germans sent her to a field hospital.

While Makarova was being treated at the hospital, Soviet troops successfully went on the counterattack. On 5 of September 1943 of the year, the Red Army liberated the Elbow. But the traitors to Tonka the machine gunner were no longer in the village at that time.

During the treatment, Tonya became the mistress of the German corporal who served as a cook. He secretly took the girl in his train to Poland. But there the corporal died, and Tonya was sent by German authorities to a concentration camp in the city of Koenigsberg.

In the 1945 year, shortly before the Great Victory, the Red Army took Koenigsberg. Tonka Makarova was called the Soviet nurse, who served from 1941 to 1944 in the 422 medical battalion. She presented a military card stolen from a real nurse and, taking into account the confusion of wartime, got a job as a nurse in a Soviet hospital.

So Hitler's henchman and prostitute from the Lokot Republic not only saved her life, but also became legalized in the honorary status of a nurse of a Soviet military hospital.

Frontovichka and the wife of the Red Army

The young nurse understood very well that she needed to protect herself even more. Therefore, when a young sergeant Victor Ginzburg, wounded during the assault on Koenigsberg, met her, she immediately agreed to his proposal to marry him, and a few days later the couple signed. Naturally, Makarova took her husband's surname - Ginzburg. Now, no one would have believed that a front-line nurse, the wife of a wounded Red Army soldier of Jewish origin in Ginzburg, could serve the Germans.

Red Army soldier Victor Ginzburg was from the city of Polotsk in Belarus. His whole family, Jews by nationality, was killed by the Nazis during the occupation. Ginzburg hated the Nazis, but in a nightmare he could not assume that he slept every night with one of the most bloody Nazi executioners, with Tonka the machine gunner.

Soon the Ginzburgs moved from the Kaliningrad region to Lepel - to Belarus, closer to Victor’s homeland. Here Victor and Antonina had two daughters. The family lived happily, enjoyed great respect from those around them: well, both the husband, a Red Army hero, and his wife, a front-line soldier, a nurse, saved the wounded Soviet soldiers. In the local museum, photographs of Victor and Antonina Ginzburg were installed on a stand in memory of the Great Patriotic War. The photo of Viktor, who was wounded during the assault on Koenigsberg and who honestly served in the Red Army, was there quite deservedly. And here is a photo of Antonina ... But then no one knew about the woman’s past - neither her husband, nor two daughters.

Antonina Ginzburg worked as a controller at a garment factory, and she worked well and, again, her photographs were often placed on the honor board. She performed in schools - told the Soviet pioneers how terrible it was to fight, how good it was to love one’s Motherland. Antonina Ginzburg was respected, although she was a woman of low sociability, who never made friends. 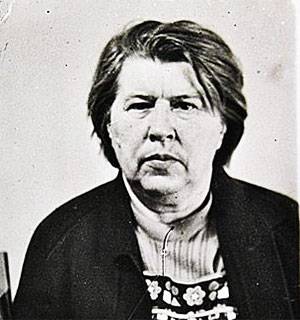 The state security organs began to search for Tonka the machine gunner immediately after the liberation of Lokty in September 1943. However, the locals polled by the Smerševites had little to say about the executioner-traitor. They knew her as Tonka, they said that she was about 21 year old, her hair was dark, most likely a Muscovite by origin or from the countryside of the Moscow region. On this all the information ended.

Antonina Makarova-Ginzburg herself calmed down. Later she confessed: for the first ten years she was still afraid of an unexpected knock on the door, then she stopped reacting to it, as she decided that the past had been completely forgotten and she was not in danger of anything else. Perhaps she would have managed to get away from Soviet justice, if not for an absurd case.

Nikolai Ivanin during the war served as the head of the Lokot prison. Like Antonina, he managed to avoid arrest. After the war, he hid for thirty years, but in 1976 in Bryansk in a city square, a man attacked Ivanin and started a fight with him. To the riot police, the “bully” stated that he had rushed to Ivanin because he was a policeman, the former head of the Lokot prison. They began to interrogate Ivanin and, among other things, he talked about the executioner woman, with whom he had been intimate for some time. He said that her name was Antonina Anatolyevna Makarova - he was mistaken in his patronymic. But counterintelligence began searching for Makarova.

We checked about 250 citizens of the Soviet Union of the appropriate age (1918-1923 years of birth) with the name of Antonin Makarov. But Tonka the machine gunner was not among them. After all, at birth she was recorded by Parfenova (Panfilova), and after the marriage she received the name Ginzburg.

It seemed that fate was smiling at the traitor again - the counterintelligence agents were about to turn off the search when a certain comrade Makarov filled out a questionnaire for traveling abroad in the same 1976 year. Makarov indicated six brothers and sisters in the questionnaire, emphasizing that they all bear the name Parfenovs (Panfilovs), except for the sister Antonina Ginzburg, who was recorded by Makarova as a girl.

A strange fact alerted KGB officers. They checked Antonina Ginsburg. But this was a respected woman - a veteran of the Great Patriotic War, a nurse of the hospital, and even married to a Jewish Red Army man. Nevertheless, Antonin Ginzburg decided to check. State security officers immediately left for Lepel. They established surveillance of the woman, but a week later they removed her.

For a whole year, counterintelligence officers collected data about Tonka the machine gunner. Antonina Ginzburg was summoned to Lepel's military registration and enlistment office, ostensibly to fill out data to award her as a veteran. The thin machine-gunner, accustomed to such attention, did not suspect anything. But in the military enlistment office under the guise of an employee, the counterintelligence talked to her. She could not tell him the location of the military units where she served, judging by her military ID. Nor did she answer the question about the names of the commanders. But this was not evidence - you never know, still a woman under sixty years old, and the war ended more than thirty years ago. Yes, and many wanted to erase those terrible events from memory.

But they continued to watch Antonina. In July 1978, KGB officers brought to Lepel a witness to the reprisals in Lokta, who saw and recognized Antonina from the window. Then two more witnesses were brought. All of them also pointed to Antonina, after which the Chekists decided to take her. Antonina reacted calmly to the arrest. She understood why she was being arrested, but she hoped that everything would get away with it — 30 years had passed, many policemen had been amnestied for a long time. However, a statute of limitations for such war criminals as Tonka the machine gunner was not provided.

Victor Ginzburg, when he was told the truth about his wife, took two daughters and left Lepel forever in an unknown direction. He was struck by the fact that his wife turned out to be a Nazi executioner who killed one and a half thousand Soviet people. Tonka the machine gunner herself was sentenced to death and shot on 11 on August 1979 of the year.