27 September 2019
103
The combined flight of the S-70 “Hunter” heavy drone and the Su-57 fighter, in fact, is becoming the first visual example in the world of the flight integration of a drone with a fifth-generation fighter. It is clear that this is still an attempt, but at the same time it is worth noting that the first step in this direction has already been taken, and this is a successful step. 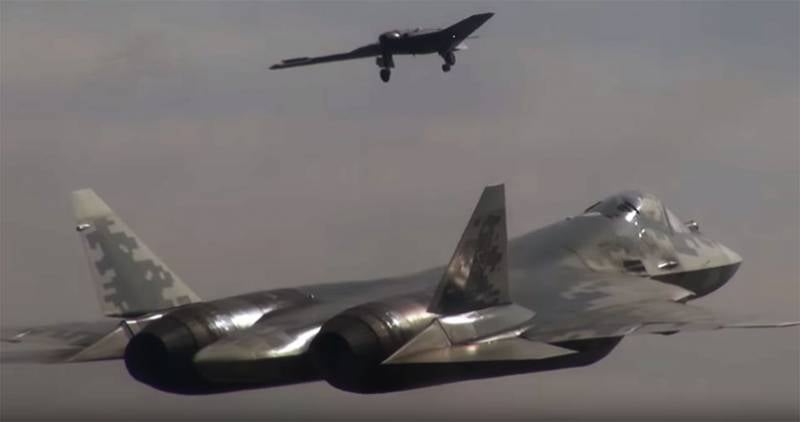 Previously, the developers reported that before the end of the year, the “Hunter” will be tested in the variant flight without operator intervention. Today, a heavy strike UAV has clearly moved to a new level of "independence".

It should also be recalled that they planned to install global positioning and communication systems on the drone, which are created for fifth-generation fighter Su-57. This suggests that the integration of these combat vehicles with the aim of the most effective performance of combat missions will increase.

The combination of C-70 and Su-57 turns the latter into a fighter of the 5 + generation in terms of gaining new capabilities.

Experts note that aviation the unit consisting of several fifth-generation Su-57 multipurpose fighters and the Okhotnik drones can ultimately become not only a single strike component, but also an effective system for breaking through the potential enemy’s air defense zones. The super-maneuverability of the Su-57 and its wide arsenal of air-to-air capabilities can lead to the neutralization of opponent’s aircraft, and the S-70 arsenal at this point can be used for preventive air defense attacks on the ground.

The main emphasis of critics once again boils down to the theses: Su-57 does not have implemented stealth technology, and the C-70 "Hunter" has increased "visibility" due to the lack of a flat nozzle.