Can you make the West hear Russia? 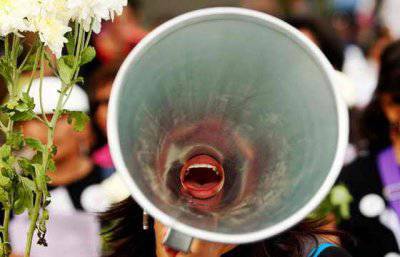 The other day, Russian President Vladimir Putin spoke to Russian diplomats, stating that we need to be more active in creating a positive image of Russia. The President emphasized that the image of Russia abroad today is formed far from Russia itself, and therefore very often this image has a distorted look.

It’s hard to argue with that, because often “demonization” of Russia reaches such extremes that it’s hard to imagine where the authors of the “demonization” strategy draw their inspiration from, if I may say so. All this is more like a big political "black" PR, which aims to reset Russia from competitive positions in the world. Western, and not only, by the way, the Western press, uses its large-scale media resources to form an idea among foreign citizens about Russia just as a country that is struggling to withstand global development, and which puts a spoke in the wheels of the “great” democratization. while remaining on guard of authoritarian values. For obvious reasons, after a series of reports of “interested” media, a foreign citizen forms something similar to the original fear of our country, the effect of neglecting our values ​​with you works, because these values ​​are exposed as something negative and unworthy of the right to be called values ​​in general. The West is more willing to accept reports from the Georgian, Qatari, Saudi, Baltic, Western-Ukrainian mass media, because it meets its (Western) interests than it will get acquainted with information reflecting the real state of affairs in the Russian Federation and its relation to certain global processes.

One of the most vivid examples is the total information pressure on Russia of the August 2008 model of the year, when the voices of many Russian media who tried to convey to the readers, viewers, listeners and users of the Network the real facts about what happened then in South Ossetia simply drowned in sweeping everything in its path misinformation stuffing. Euronews, CNN, the Air Force simply crushed Russia with its mass, creating a general impression of Moscow as the capital of the aggressor state. And then this maxim had to be long and stubbornly refuted, and, it must be said, again, not without the help of foreign media, mostly French.

And this once again proves only that Russia today does not really have information tools that would be at least somewhat close in strength and effect to many of the foreign media. And this is all the more strange, because the media field in our country is quite active, and to call this field low-yielding language does not even turn. So why, then, will the world be more willing to believe in the plots and analysis of the situation in Russia from the Qatari Al-Jazeera channel, rather than trying to learn about the situation in Russia, as they say, from first hand.

There may be several answers to this question. First, not all information agencies, television channels and websites of Russia create their own versions in foreign languages. And secondly, the stereotype that freedom of speech has been completely and irrevocably killed in Russia remains extremely tenacious in a number of foreign countries.

It turns out that Russia can solve the problem of purposefully distorted image in the following way: to actively develop multilingual information services, which would broadcast on the position of Russia for foreign citizens wishing to keep abreast of events. There is no doubt that the foreign viewer-reader-listener-user would not be against the possibility of perceiving information about the Russian Federation not through the prism of the opinions of Al-Jazeera journalists, but first-hand.

However, our readers can say that now there are Russian news agencies that broadcast, for example, in English to a foreign audience. What prevents them from becoming that “soft power” that talks about Russia to foreign citizens. But upon closer examination, it turns out that a very impressive percentage of these agencies suspiciously offer the world a point of view that, to put it mildly, does not always fit into the real situation in Russia. If we are talking about opposition rallies in Moscow, it covers exclusively how the riot police behave, hindering the holding of marches, and in a strange way, shots are excluded when the same riot police themselves fall prey to overly raging oppositionists. Supplies weapons to Syria are exposed only as assistance to Bashar Assad in the administration of his “bloody policy”, but the fact that the supply of weapons to the camp of terrorists posing as Syrian oppositionists is “sinning” on the American side is almost impossible to hear in this news.

It turns out that Russia has a foreign voice, but only this voice is often consonant with the reports of CNN, the BBC or Al-Jazeera. The rectification of the situation lies in the plane of the popularization of Russian information media resources by all available and legitimate means. This task remains extremely difficult, but the effect of its solution will be more than significant. And if you don’t bother with this now, in a few years the Russian media will finally be on the margins of the world media space.