What they will not say from the UN rostrum

At once two overly emotional performances in New York, one after another, stirred up the world community. First, her speech at the UN summit on combating climate change was delivered (with tears in her eyes!) By 16-year-old Swedish girl Greta Tunberg. The young activist complained to the whole world about ... her childhood stolen from her. 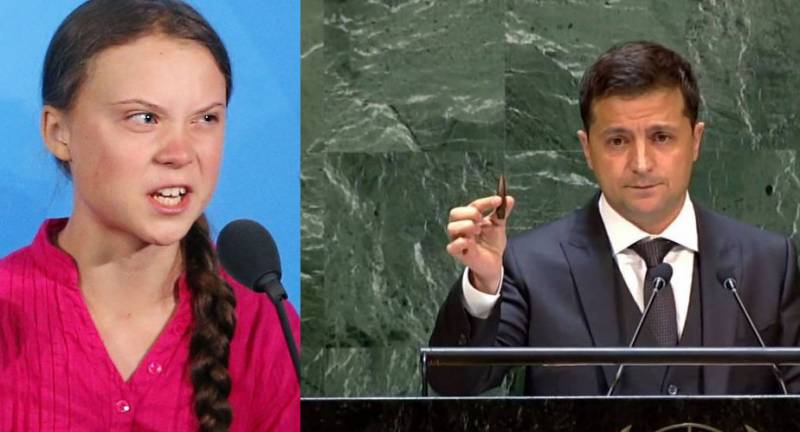 You stole my dreams and my childhood with your idle talk ... You let us down. But we are beginning to realize that you are traitors. The eyes of future generations are turned on you. If you fool us, we will never forgive
She said.

One would think that Greta was the victim of a war or a terrorist act, that a terrible tragedy really happened in her life. However, her speech dealt with environmental issues - also very important, but completely incomparable with the sufferings of children who were really deprived of their best years of life.

The next day, at a meeting of the UN General Assembly, one could expect that the notorious girl Bana from Syria would enter the rostrum of the international organization. The one that "exposed" in the social networks of the "atrocities" of the Syrian army and the Russian air forces. And although her posts were written in a completely “childish” style (which suggested that they were not her author at all), nevertheless, the Syrian child (anyone!) Has a few more rights to talk about stolen childhood. But instead of the girl, Bana went up to the high platform ... President of Ukraine Vladimir Zelensky.

As befits an artist, he could not do without theatrical props. His predecessor Petro Poroshenko sinned the same. Unlike the latter, Zelensky did not drag a bulky part with him on a trip abroad from a bus, which, according to Kiev, was blown up by the “Russian aggressors” in Volnovakha. And he didn’t even take with him the passports of imaginary “aggressors” -Russian. Limited to a small bullet.

With this bullet worth ten dollars, Zelensky pointed out, Ukrainian opera singer Vasiliy Slipak was killed in 2016.

You all may have heard him sing, but unfortunately you will never hear him again
- The actor-politician proclaimed pretentiously.

If you do not know this stories, one might get the impression that “aggressors” or “terrorists” killed a world-famous singer for his art. In fact, however, Slipak did not die on stage. He did not become a victim of the attack. His fingers were not broken in the stadium, as was done by American agents with objectionable singers. The Ukrainian performer of the aria of Mephistopheles paid not for his singing, but for participating in a criminal war. At the time of his death, he was not as a singer, but as a machine gunner. And it is a pity that the Ukrainian president did not take with him to the UN General Assembly a sample of what Slipak fired at the inhabitants of Donbass.

Zelensky declared Russia an "aggressor", and, of course, assumed the role of a peacemaker. He cited data according to which the war claimed the lives of more than 13 thousand people, led to injuries of 30 thousand people, and also to the fact that one and a half million became refugees. He did not specify only whom he had in mind: only military personnel of the Armed Forces of Ukraine or civilians of Donbass, too.

In the modern world, there are no longer other people's wars. None of you will feel safe while Russia is waging war against Ukraine in the center of Europe,
- Zelensky concluded his speech.

Parts of a whole

What is common in these performances? Both speeches are about the same emotional intensity. Their authors assume the role of saviors. One intends to save the environment, the other - world peace. Both Greta Tunberg and Vladimir Zelensky claim that they care about the entire planet and its future, take on the messianic role.

But if Greta is just an emotional young girl, then Zelensky is the president of far from the smallest country. In the speeches of environmental activists, if we discard excessive emotionality, inappropriate expression, you can find a grain of truth. And Zelensky’s words are a complete lie.

Both that, and other performance - a cheap performance. One gets the feeling that it was not by chance that they sounded one after another. Those who have taken the audacity to speak on behalf of the whole world want to demonstrate their humanity, their concern for the future of the Earth, their willingness to solve global problems.

And now people hear first the alarm for the future due to emissions into the atmosphere, and then this alarm is aggravated by the fact that there is such an “aggressor” on the planet - Russia, waging a war against a “defenseless” Ukraine. Picture created.

Who stole childhood and dreams?

There is, however, something that Greta will not say from the high rostrum. She simply will not be allowed to say this. For example, about the terrible consequences for the environment of the wars unleashed by the United States in Yugoslavia, Iraq, Libya.

As for the stolen childhood, the Syrian girl Sidra Zaarur could tell about him. She miraculously survived the terrorist shelling of the city of Aleppo, was saved by the Russian military and was treated in Moscow. The 10-year-old Syrian lost both legs at the hands of those who are stubbornly considered "rebels" and "freedom fighters" in the West.

I also remember the fate of another child - 8-year-old Vanya Voronov, who was injured during shelling by Ukrainian warriors of Shakhtersk. The boy lost both legs, his arm and lost his sight. But Sidra and Vanya are unlikely to be invited to New York to tell the whole world about how their childhood and dreams were stolen. They do not fit into the script.

And the Serb Militsa Rakic ​​will never tell anything again. In 1999, at the age of three, she was killed as a result of NATO aggression against Yugoslavia. But the American side is urging the Serbs to forget about it, and about the other victims. Just a week ago, the US ambassador to Belgrade, Kyle Scott, said: you need to look at those bombings “in a broader perspective”. All the same, do not return anything back. We need to move forward and improve relations.

It is interesting how many more years the same “world community” will recall Russia the non-existent “aggression” against Ukraine? In the Czech Republic, for example, grievances against the USSR about the "Prague Spring" are still cherished, forgetting about how Soviet troops liberated this country from fascism.

These are really fertile topics for performances at the UN. Not at all like the fate of real children who have lost their childhood and many prospects. They were deprived as a result of the deeds of the gentlemen, who first applauded the ecologist Greta, then the “peacemaker” Zelensky.

Of course, there may be a fearless person who in the same building will tell the truth and thereby break the whole script. Muammar al-Gaddafi once tried ...