October 4 2019
10
The Reds suffered a tangible defeat (From Crimea - to the Kuban. Throw of General Ulagai). 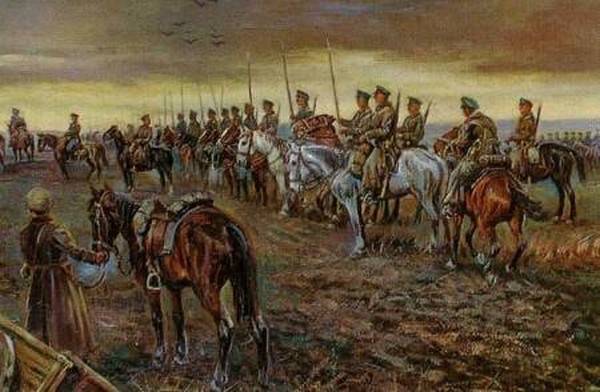 Results of the first stage of action Strategic landing

Moreover, the defeat of the 1-th Caucasian Cavalry Division at first remains unknown for the army command. The last morning of August 18 combines cavalry division, 14 and Tamanskaya separate cavalry brigades into an equestrian group (a total of about 1000 sabers) and the latter’s strike from Rogosovskaya’s side from Timoshevskaya’s side, and Timsevsky decides to cover the railway with the left flank of the Ural brigade to Rogoshevsky knot and discard whites for line x. Butenko - Art. Novo-Dzherelievskaya. The right flank of the Ural brigade was supposed to, having captured Brynkovskaya and the crossings in its area, keep the enemy on the Brynkovskaya-x line. Butenko.

By this time, the enemy was grouping: 1-I Kuban Division and Consolidated Infantry Division in the area of ​​Rogovskaya and Novo-Dzherelievskaya; The 2th Kuban Division was advancing unhindered into the Novo-Nikolaevskaya-Popovic area.

Around the 3 hours of the 18 August, the right-flank regiment and cavalry division of the Ural brigade easily take control of Brynkovskaya, dropping the enemy detachment of up to 200 sabers in the village. Voluntary. The squad’s attempt to return the village with a counterattack fails. The main forces of the brigade (about 3000 - 3500 bayonets, 8 guns) at dawn go on the offensive from Chepeginskaya and, having shot down small parts of the enemy, go to line x by 15 hours. Seeker - Art. Rogovskaya, turning around in long chains and failing to build a deep battle formation. Here the red units receive a strong oncoming blow from Babiev’s cavalry. The latter, limiting itself from the front with light pressure, part of the forces breaks out at the junction of two regiments, and the main forces covers them from the open left flank - and goes to their rear. Unable to withstand the blow and horseback attacks, the main forces of the Ural brigade tumble in disarray into the floodplains of the Beisug Girl, losing all the artillery, a significant part of the machine guns and many prisoners. Parts of Babiev, bringing the persecution to the swamps of the Beisug festoon, occupy the Bryukhovetskaya unit with an insignificant detachment, and with the main forces leave for Rogovskaya.

The equestrian group, acting as the 14 and Taman brigades for about 17 hours, instead of attacking, takes up defensive positions in 3 km west of Timoshevskaya. Around 19 hours, the Kazanovich’s division throws the 2 regiment of the Taman brigade to Novo-Korsunskaya with a strong artillery fire, and one regiment of this brigade and the 14 th brigade to Medvedovskaya. Parts of the cavalry division still in the afternoon, without a fight, depart from Timoshevskaya and Bryukhovetskaya to Novo-Korsunskaya and Baturinskaya. Around 20 hours, the division of Kazanovich occupies Timoshevskaya. The 2th Kuban Division, spraying into separate units, freely occupies Novo-Nizhe-Stebliyevskaya, Novo-Nikolaevskaya, Staro-Dzherelievskaya, Popovicheskaya, Starovelichkovskaya. 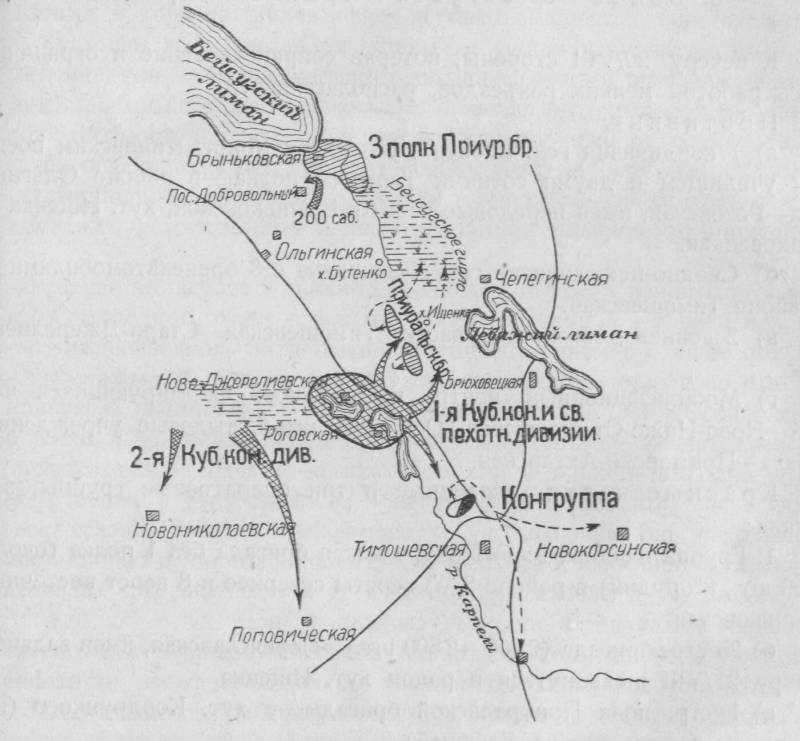 Thus, having broken up disparate red formations and units during the 15 - 18 fights in August, by the evening of the 18 August, the White occupied the area with the 200000 population and the important railway junction for the defense of the Azov coast.

The threat to Krasnodar causes on August 19 the hasty evacuation of all army institutions and party organizations from it.

The miscalculation of General Ulagai

But the enemy, despite the extremely favorable situation, on the morning of the 19 of August stops the attack and, having knocked out only from the Brynkov part of the Ural brigade, goes over to the defensive on the whole front. This is explained by the fact that Ulagay decides not to bury himself, put his forces in order, replenish them with mobilization of the population and then, with new forces, enter the fight against suitable red reserves. The idea is undoubtedly true if the increase in its forces was supposed due to the landing of new parts from the Crimea, and fatal for the operation, which was based on the factor of high speed and increasing the rate of impact.

White’s hopes of mobilization failed, and the red reserves that approached soon turned the tide of war in their favor.

The Red Command, believing that the enemy was regrouping and preparing the offensive, decided to warn him and take the initiative with active actions, without waiting for the reserves to approach. Therefore, I started the 9 and the commander of the equestrian group (23 hours 20 minutes on the 20 of August): by the morning of the 21 of August - the first to take the line Olginskaya - Rogovskaya - Bryukhovetskaya, the second - to capture Timoshevskaya.

By the evening of August 21, the main reserves of the 9 Army finished their concentration: the 2 I Don Division in Novo-Korsun, the 22 I Brigade in Poltava. The Nachdiva-9 group was strengthened by the 27-brigade and the Don Cavalry Regiment.

This made it possible for the command of the 9 Army to begin a decisive operation to defeat the landing. Leaving aside the tasks of the Nachdiv-9 group, the commander ordered in the morning of the 22th of August the 2th Don Division with its horse group subordinate to go on the offensive on the Bryukhovetskaya-Timoshevskaya front and take possession of the Timoshevsky railway junction. The 26th brigade, covering Medvedovskaya with the main forces, was to render assistance to the 2th Don division on the right flank, and to master Art. Popovic. The 22-I cavalry brigade, having seized Staro-Dzherelievskaya, was supposed to advance on Novo-Nikolaevskaya - with access to the enemy rear at Novo-Nizhe-Stebliyevskaya.

As for the enemy, the latter, assuming in the future to develop active actions towards Krasnodar, at the 22 of August decided to limit himself only to active defense.

Starting on the evening of August 21, Ulagay, attaching special importance to the Babiev site, reinforced the latter with the Alekseevsky officer regiment and ordered that parts of the Ural brigade (which captured the Brynkovskaya area, the village of Dobrovolny, which took possession of the territory of Buryankiv).

The implementation of these plans of the parties began at the dawn of August 22 with the advance of the Ural brigade. Building on the success achieved the day before, the latter easily knocked out the Konstantinovsky school from the village of Olginskaya and by the 17 clock approached the railway line at the station of Olginskaya - but, having scattered strongly over a stretch of more than 30 km, it failed to develop success.

By the evening of August 20, the parties, having lost contact and limited themselves to the work of small patrols, were located:

White.
a) The 1th Kuban division, reinforced by the Konstantinovsky military school and two hundred Tersky regiment, - in the area of ​​Olginskaya - Rogovskaya, having advanced units in Brynkovskaya, hut. Seeker and Bryukhovetskaya.

b) Combined infantry division with 3 armored vehicles - in the region of Timoshevskaya.

Reds (summarized in three operational groups).
A) Nachdiva-9 group: the Ural brigade without a regiment (about 3000 bayonets, 8 guns) in the area north and east of Brynkovskaya.

B) the rifle regiment of the Ural brigade - at the Hut. Kondrutsky (on the eastern coast of Lebyazhy estuary).

E) 26-I rifle brigade, reinforced by two armored trains, one cavalry and one rifle regiments, in the area Dyadkovskaya - Medvedovskaya - Staro-Velichkovskaya. The main forces are in Medvedovskaya. In the movement to strengthen the anti-airborne front were the 2-I Don division from the side of the Tikhoretskaya and 22-I cavalry brigade (with the 198-m rifle regiment; 450 saber, 700 bayonets, 31 machine gun, 6 guns) from the Poltava Peninsula. 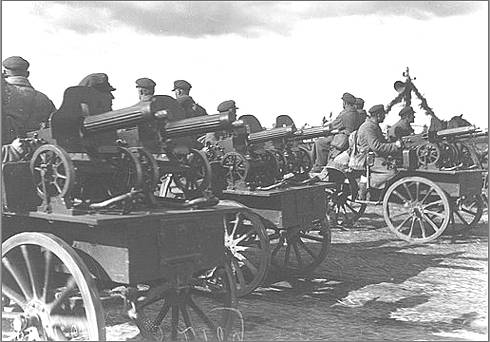 The 25-I brigade, having launched the offensive almost simultaneously with the Ural brigade, reached the 8 o’clock in the morning on the railway line in the Novo-Dzherelievskaya-Rogovskaya area. The threat of a break in communications with the sea caused a bold maneuver of the Babiev group. Hiding behind the Bryukhovetskaya’s side from the reserves of the Nachdivna-9 group (27-I brigade and Don Cavalry regiment) located there, a detachment in 200 — 300 sabers, 150 — 200 bayonets on carts with two guns, the main forces of Babiev about 8 hours from 30 hours XN minutes Smogliya, Kamyanskogo to the Hut. Seeked and destroyed the reserve battalion of the 25 brigade located there. After turning southward to Rogovskaya, they attacked from the rear and surrounded the main forces of the 25 Red Brigade. After a stubborn battle, the remnants of this brigade in the amount of up to 300 people with several machine guns broke through to the north-west and took refuge in the reeds of the Beisug festoon. The enemy, having selected a combined detachment (Kornilovsky horse and Alekseevsky infantry regiments) with two guns to attack the Ural brigade, with the main forces retreated to Rogovskaya.

A combined detachment about 18 hours with a swift blow knocked down the barrier of the Ural brigade at x. Serbina and, breaking through part of the cavalry north of the village. Voluntary, forced her units to hastily retreat to Brynkovskaya, fortified on the outskirts of the latter.

Thus, having successfully begun in the morning, by the evening the offensive of the group of nachdivas ended in complete failure - due to the dispersion of forces and fragmented actions.

Otherwise, the situation on this day in other areas.

The Reds managed to capture Tymoshevskaya. The left flank of the 26th brigade knocked out the enemy from Popovicheskaya. The 22nd cavalry brigade, having defeated the enemy’s barrier at Staro-Dzherelievskaya, went to the area of ​​Novo-Nikolaevskaya in the evening. Red Azov flotillataking advantage of the departure of the enemy fleet, in the morning of August 22, it fired heavily at the enemy’s main base in Primorsko-Akhtarskaya, forcing the headquarters and rear of the Ulagai group to leave.

Author:
Oleynikov Alexey
Articles from this series:
From Crimea - to the Kuban. Throw of General Ulagai
Strategic landing