“The stronger we are, the more positive energy we bring to the world” - China prepares for the largest military parade

25 September 2019
47
The 70 anniversary of the founding of the People's Republic of China is supposed to be celebrated with fanfare. One of the events dedicated to the symbolic for stories China's event, will be the parade of the armed forces of China. Despite its mass character, the Chinese military emphasize that such a major event is not an attempt to "demonstrate power". 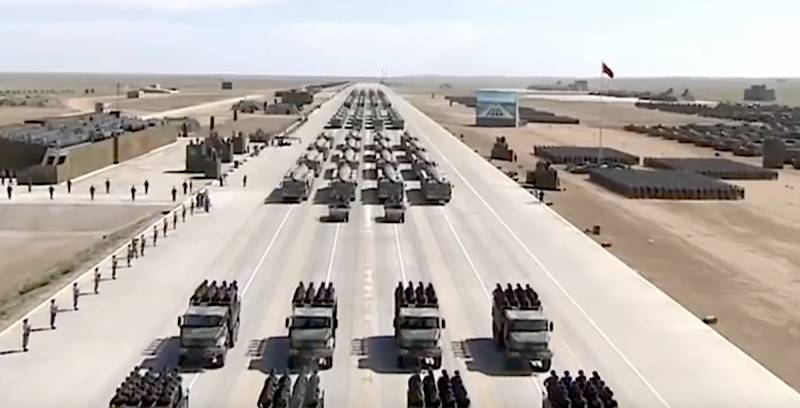 On October 1, Beijing will host the largest military parade in the history of the country: it is dedicated to the 70 anniversary of the founding of the PRC. President Xi Jinping is going to honor the event with his presence. The military modernization program initiated by the Chinese leader should demonstrate everything that the Chinese military industry has achieved in recent years.

Local state media report that the parade will showcase the latest weapons, including missiles, planes and UAVs. However, it is still not clear how ready China is to reveal its combat potential.

In particular, the representative of the Chinese Ministry of Defense, Wu Qian, speaking at a press conference about the parade, said that there were always certain people and forces who “loved to improbably untwist words” about the country's armed forces.

They have an extremely strange logic in their head: if the Chinese armed forces demonstrate weapon and technology, then this is a "demonstration of power", and if not, then they lack transparency.
- stressed the culprit.

The PLA representative added that over the past seven decades, China’s development in the military has become apparent to everyone.

We have no intention and no need to use a military parade as a demonstration of power. The stronger we are, the more positive energy we bring to the world.

Despite the fact that China did not announce what kind of new equipment it will present at the parade, China’s state media focused on the Dongfeng-41 intercontinental ballistic missile, which could carry several nuclear warheads and reach the United States.

The presence of DR-8 or Wuzhen 8 supersonic UAVs and Sharp Sword stealth drones at rehearsals is also noted. DR-8, resembling the D-21 unmanned aerial vehicle, decommissioned in the US Armed Forces 40 years ago, should become one of the main tools to combat American aircraft carrier groups during a possible conflict in the South China Sea or the Western Pacific. Also, among other weapons, the DF-17 hypersonic missile is visible in frames from the parade.