25 September 2019
45
Since 2015, the United States has been implementing a program for developing a promising tracked armored vehicle with artillery armament MPF (Mobile Protected Firepower), one of whose participants is General Dynamics Corporation. A few days ago at the Modern Day Marine conference, she first showed the BBM Griffin II model offered to the Pentagon. This model is noticeably different from those shown earlier and has great chances to reach the series and adoption. 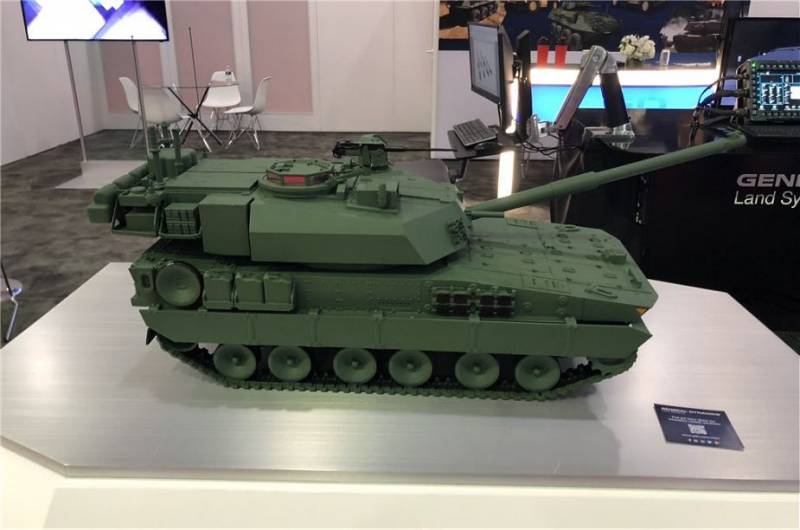 Presented at Modern Day Marine, the layout demonstrates the general features of the proposed Griffin II project. Together with him, the developers showed some other materials about various design features. At the same time, some data on the promising BBM has not yet been announced.

The new Griffin II BBM is based on the older Griffin I model, which was demonstrated in the past. It was built on the basis of existing components in accordance with the technical specifications of the customer. Recall, then the chassis of the tracked infantry fighting vehicle ASCOD 2 was used, on which a lightweight tower was installed tank M1A2 with the new XM360 gun.

Subsequently, the project underwent major changes, as a result of which appeared BBM Griffin II. In the new project, some already developed solutions are used, but at the same time there are some new components and ideas.

Griffin II is based on the chassis of the front-engine layout, the middle and rear compartment of which are given to the fighting compartment. On such a chassis mounted tower of the original design with cannon-machine gun weapons.

The body of the new chassis should have protection against small-caliber shells of existing guns. The tower of the original design is distinguished by the use of modular outboard reservations. It is made in the form of a pair of blocks covering the forehead, cheekbones and sides of the tower. Other sections of the latter are not additionally closed.

The type and characteristics of the power plant were not called. The chassis includes six track rollers per side and front-wheel drive wheels.

The presented mock-up demonstrates a BBM variant with a smoothbore gun of the caliber 120 mm and a coaxial machine gun. Another machine gun mounted on the roof of the tower; smoke grenade launchers are available. The possibility of using a modern effective fire control system is noted, but its detailed composition is unknown. The layout clearly shows the panoramic sight of the commander and the fixed optical instruments of the gunner.

Depending on the configuration of the protection and other features, the BBM Griffin II may have a combat weight at the level of 35-38 t - the maximum permissible technical specification for MPF. The mobility characteristics are not specified, but according to these parameters, the new sample should not be inferior to existing ones.

The MPF program started in 2015 and has now moved into the development phase. In December last year, the Pentagon signed contracts with General Dynamics and BAE Systems for the development of technical projects and the construction of experimental equipment. It took 14 months to design and start the delivery of prototypes; after another 4-5 months, the customer plans to receive all ordered prototypes - two types of 12 machines. The military department allocated 335 million dollars for the construction of the experienced Griffin II. The competing project received 376 millions.

of the latter, News it follows that General Dynamics Corporation used the first 9 months to complete the design and, possibly, to begin the construction of experimental equipment. Nevertheless, full-fledged Griffin II samples are not yet ready, and you have to show the layout at exhibitions. Finished equipment will appear no later than the beginning of 2020.

At 2020-21 Comparative tests of 24 prototypes of two models are planned. By the beginning of the 2022 financial year, a winner will be selected, after which a contract for pre-production equipment will appear. According to current plans, before 2025, 26 armored combat vehicles will be built with the possibility of ordering an additional batch of 28 units.

In 2025 f. full-scale serial production of new equipment will be launched with the goal of re-equipping the army. In total, it is planned to build 504 MPF units for the ground forces and the National Guard. In the regular infantry brigades of the army and the National Guard, new separate companies of the type Infantry Brigade Combat Team will appear. Each of them relies on 14 units of new armored vehicles.

With the help of IBCT units, it is planned to provide fire support for infantry in different conditions. The MPF will take on some of the responsibilities of tanks and self-propelled artillery. Due to their smaller size and mass, such armored combat vehicles will be distinguished by greater tactical and strategic mobility - at the required level of firepower. The first company of a new type will begin service in 2025, at the same time as the start of the supply of serial equipment.

The problem of choice

In the final part of the MPF program came two projects of armored vehicles. The future results of such a contest are unknown, but it is still difficult to predict them. The proposed BBMs from two developers have similar characteristics and capabilities, as well as various characteristic features and differences. Which of these factors will be decisive and determine the Pentagon’s choice is a big question. 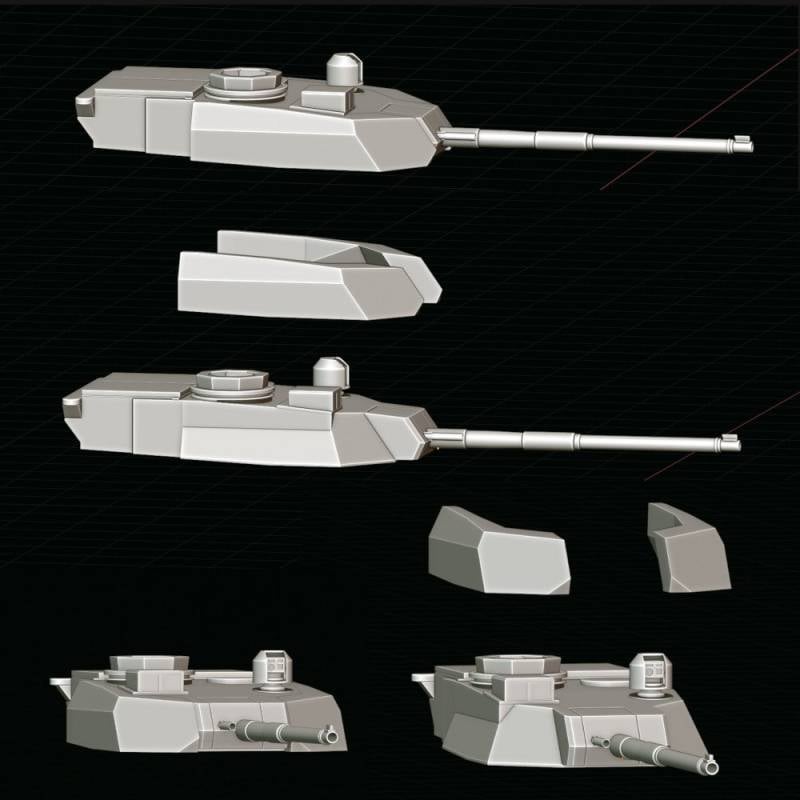 Tower and its additional protection

BBM Griffin II competes with the M8 Armored Gun System from BAE Systems. It is an option of deep modernization of the eponymous light landing tank, created in the mid-nineties. The BBM is built according to the traditional tank design, it carries an 105-mm cannon with an automatic loader and can be equipped with mounted protection modules of various types. Combat weight - no more than 25-27 tons.

Available data show that General Dynamics Griffin II may have some advantages over M8 AGS. Thus, the availability of modular reservations and front-wheel chassis layout significantly increase the overall level of protection and survivability of the machine on the battlefield. A triple manned turret is used with an 120-mm gun superior to the 105-mm cannon of the light tank M8.

At the same time, Griffin II is slightly larger and noticeably heavier than its competitor, although it fits into the limitations of the technical specifications. In addition, the excessive novelty of the design can be considered a disadvantage. The current M8 AGS project is based on an older model of armored vehicles. In the past, he went through all stages of testing and received a recommendation for adoption. General Dynamics still has to go through the tests and prove its potential.

BAE Systems has already built an updated M8 prototype tank for the MPF program. Its competitors from General Dynamics are not yet ready to present a full-fledged prototype of its Griffin II. Nevertheless, the first samples of armored vehicles of the two models will have to go to tests in a few months - not later than the beginning of 2020.

The Mobile Protected Firepower program started a few years ago and so far has shown modest success. Over the past four years, several participating companies have submitted their projects, and two of them have reached the final stage of the program. Next year they will give real equipment for testing.

Despite the considerable duration of development work, the MPF program is in accordance with the established schedule. However, its outcome remains unknown. The final choice of a promising model for the army and the National Guard will be made only in a few years. In the meantime, it remains only to study the presented layout and wait for the display of full-fledged equipment.