Kharkov battle. May 1942 of the year. Barvenkovsky "boiler"

25 September 2019
13
A second attempt to liberate Kharkov was made in May 1942. As a result of the Barvenkovo-Lozavskaya operation, the Soviet command failed to liberate Kharkov in January 1942, but south of Kharkov, on the western bank of the Seversky Donets River, was created barvenkovo ​​ledge 90 km deep and 100 km wide. The ledge was deeply wedged into the German defense, but at its base in the area of ​​Izyum there was a narrow throat, from the north the Germans hung from Balakliya and from the south from Slavyansk. With the beginning of spring thaw in March, active hostilities on both sides were suspended and the opposing sides began to prepare for spring-summer operations. 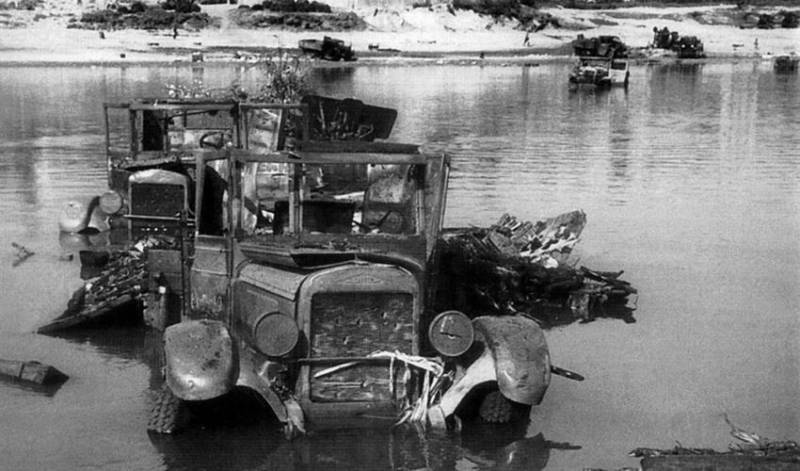 Plans of the Soviet and German command

The Soviet Supreme Headquarters assumed that the Germans would attack Moscow, and Hitler was preparing the Blau operation, which envisaged an offensive in the south of the Soviet-German front with the aim of breaking through to oil fields in the Caucasus.

The Soviet command at a meeting in the Kremlin at the end of March considered the proposals of the commander of the South-Western direction Tymoshenko and approved the campaign plan for the spring-summer of 1942. In order to protect Moscow from the German offensive from the south, it was decided to carry out an offensive from the Barvenkov ledge and liberate Kharkov, destroy the encircled German troops in the area, regroup forces and attack Dnepropetrovsk and Sinelnikovo from the northeast. The southwestern front was supposed to liberate the city with the help of converging attacks from the north and south of Kharkov.

The Southern Front, under the command of Malinovsky, should not have been advancing, he was tasked to gain a foothold on the occupied lines and with his right wing to ensure the advance of the troops of the South-Western Front in the Kharkov direction. The Soviet command did not foresee the possibility of a German attack on the Barvenkovo ​​ledge.

Three armies struck north of Kharkov: 38-I, 28-I and 21-I. The main role was assigned to the 28 Army under the command of Ryabyshev. In collaboration with the 6 and 38 armies, it was also to surround and defeat the forces of the 51 German army corps in the Chuguev region southeast of Kharkov. 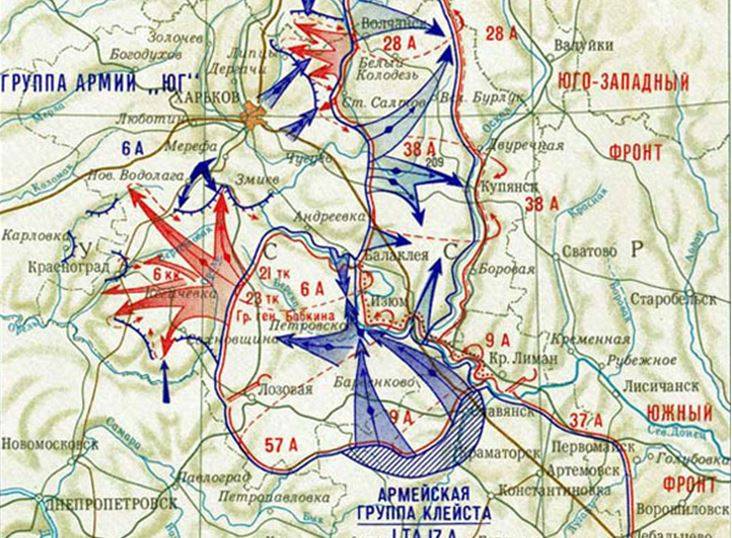 The 6, 9 and 57 armies, and the army group of General Bobkin, attacked Kharkov from the south-west and encircled the 6 German army together with the 28 army advancing from the north from the Barvenkovo ​​ledge south of Kharkov. The main role was assigned to the 6 Army and Bobkin's group, which were supposed to advance in the direction of Meref - Kharkov, cut the German communications west of Kharkov and, having made a breakthrough to the west, take the city of Krasnograd.

According to the plan of the operation, the Soviet troops by the 38 and 6 armies were to take German troops into the "cauldron" in the Chuguev region, and the second "boiler" by the 28, 6 army and the Bobkin military group in the Kharkov region. Bobkin’s group struck westward in depth, providing an external front for the encirclement and creating a springboard for an attack on the Dnieper.

The offensive from the Barvenkovo ​​ledge was risky, because the Germans could easily organize a “cauldron” for the Soviet troops, cutting the “narrow throat” in the area of ​​Izyum, which subsequently happened.

The German command of Army Group South, in support of Operation Blau, at the beginning of the spring-summer campaign, set the task for its troops to eliminate the Barwenka ledge in the narrow throat with two converging blows from Slavyansk and Balakliya (Operation Fredericus). Parts of the 1st were supposed to advance from the Slavyansk region tank Kleist Army and the 17th Army of Goth. The troops for this operation began to concentrate in the winter, the German command pulled here the 640th group.

thanks aviation and intelligence agents, the Germans knew about Tymoshenko’s preparations for the offensive, and the Soviet command was not able to fix the concentration of German troops in this direction

As a result, in March-April of 1942, a real race was going on in the Kharkov region for the preparation of offensive operations directed against each other, and the question was who would start first and whether they could outplay the enemy.

The beginning of the Soviet offensive

The first to attack the Soviet troops. May 12 after a powerful artillery bombardment, they went on the offensive from the north and south of Kharkov. For the Germans, who themselves were preparing to launch the May 18 offensive, this outstripping blow was still unexpected. 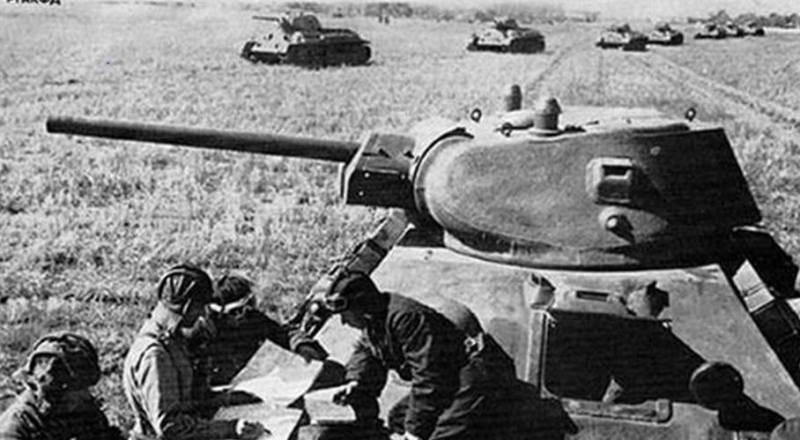 Soviet tanks on the offensive

On the northern flank, the 28 Army, advancing in the Volchansk area, broke through the German front to a depth of 65 km and by May 17 came close to Kharkov. Artillery cannonade was already heard in the city, and everyone was waiting for a speedy release. On the southern flank, the strike force operating from the Barvenk ledge also broke through the front and, having plunged 25-50 kilometers, went to Merefa and Krasnograd, semicircling the latter, threatened the encirclement of Kharkov from the west. 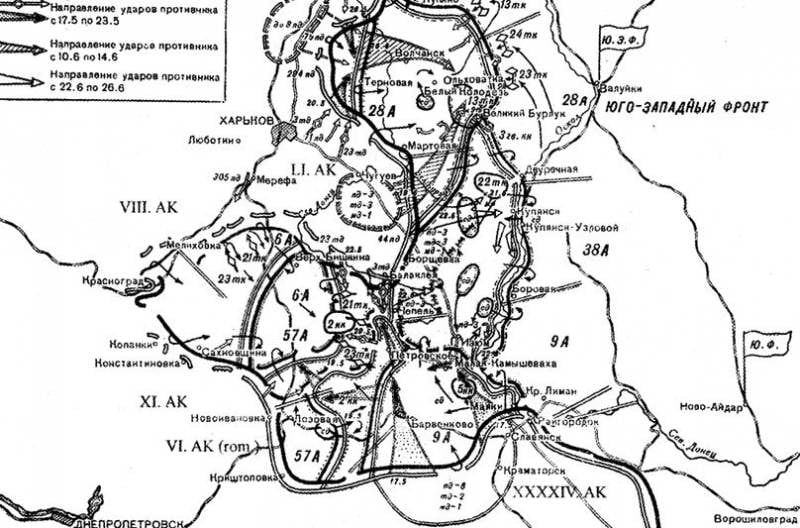 On the northern flag, the troops of the 28 Army reached the suburbs of Kharkov, but the Germans transferred additional forces to this section from the southern flank and deployed forces that were preparing to strike at the base of the Barvenkovo ​​ledge. The German command, having superiority in manpower, increased resistance on the northern flank and the advance of the Soviet troops stalled. Fierce battles began between Chuguev and Stary Saltov, from where the Soviet troops tried to surround Chuguev. No one wanted to concede, for example, the village of Peschanoe repeatedly passed from hand to hand for several days, but the Soviet troops could not advance further.

Army Commander of the South Army Group Field Marshal Bok came up with a proposal to transfer several divisions from the 1 Tank Army preparing to strike at the base of the Barvenkovo ​​ledge to stop the enemy’s advance. But this put an end to Operation Fridericus, so he was refused and preparations for a counter-offensive at the base of the Barvenkovo ​​ledge were begun.

Gorodniansky’s army was passive on the southern flank of the 6th army, the commander was in no hurry to introduce tank corps into the breakthrough of the 21th and 23th and this allowed the Germans to transfer troops to the northern flank and stop the Soviet offensive. Most likely, if a more serious threat to Kharkov’s encirclement from the west would arise on the southern flank, the Germans would have to withdraw troops from under Slavyansk and transfer them to a threatening direction. But the Soviet command was in no hurry to deploy the offensive, lost time and the Germans were able to concentrate troops to strike at the base of the ledge.

In addition, the troops of the Southern Front did not take active action, and the 57 and 9 armies subordinate to the Southern Front, which occupied the southern side of the Barvenkovo ​​ledge, did not even prepare for active defense. The battle formations of the troops were not separated, there was no engineering equipment of the area, and the depth of defense was only 3-4 km.

In the process of covering Kharkov, the troops suffered heavy losses, as tanks and infantry often rushed to the well-fortified enemy defense units without reconnaissance and suppression by artillery. By May 17, the troops were exhausted by continuous battles and were stopped by the enemy in many sections of the front.

The German counterattack began on May 17, the Kleist’s 1 Panzer Army launched two cross-cutting attacks on the rear of the advancing Soviet units, one from Andreevka on Barvenkovo ​​and the second from Slavyansk to Dolgenkaya with the subsequent exit of both groups to Izyum. The purpose of these attacks was to dissect the defense of the 9 Army, encircle and destroy the group east of Barvenkov with a further attack on Izyum - Petrovskoye in the direction of Balakliya to connect with units of the 6 Army on the Chuguevsky ledge and surround the entire group of Soviet troops on the Barvenkovsky ledge. On the very first day of the offensive, Barvenkovo ​​and Dolgenkaya were captured, in which the communications center of the 9 Army was destroyed, which led to the loss of controllability of the troops. 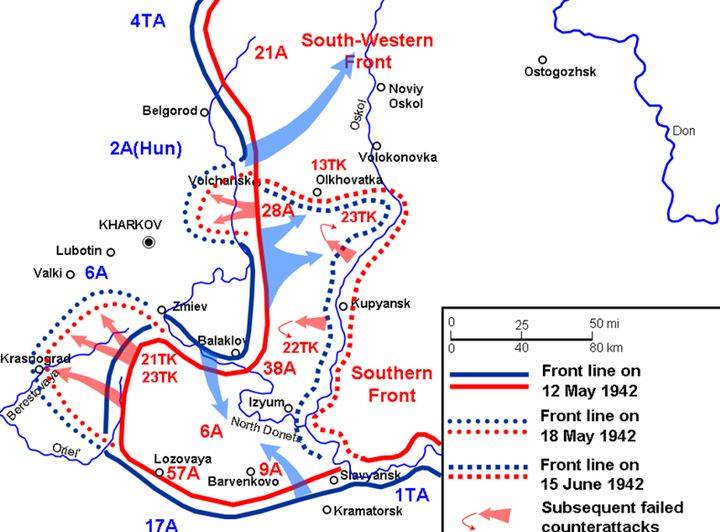 At this time, on the edge of the offensive on the southern flank, the 21 and 23 tank corps were finally thrown into the breach, which went deep into the German defenses and even more detached from the supply bases that destroyed the Kleist tanks.

By 18 of May, the situation had deteriorated sharply. The chief of the General Staff, Vasilevsky, proposed stopping the offensive and withdrawing the 6, 9, 57 Army and the group of General Bobkin from the Barvenkovo ​​ledge. Tymoshenko reported to Stalin that this danger was exaggerated and the troops continued the offensive. The Germans deployed their troops to the West, took Lozova and 22 in May surrounded the remnants of the 57 Army and the wedged 21 and 23 Tank Corps. As a result, by May 23, the Germans closed the encirclement and the entire group was in the "cauldron".

The results of the battles on the Barvenkovo ​​ledge

The retreat order was only given on 25 in May; the most difficult situation was for the troops, breaking deep west to the area of ​​Krasnograd. Now the front line was behind them almost 150 km, and they had to break through with their battles to their own. Not everyone managed to escape from the encirclement, only the most persistent and ready to fight to the end reached the Seversky Donets.

Column of Soviet prisoners of war

To release the encircled Soviet group as part of the Southern Front, a consolidated tank corps was formed, which from May 25 began to attempt to break through the outer encirclement. Two shock groups were formed inside the encirclement ring to break through the inner ring. The first group was advancing from the Lozovenka area towards the consolidated tank corps at Chepel. Of the 22 thousands of servicemen who went on a breakthrough, only 27 thousand people were able to break through on 5 in May. In total, by 30 in May, about 38 thousand people were able to enter the positions of the 27 Army and the combined tank corps. The Germans created a dense circle of encirclement and, using aircraft and tanks extensively, destroyed the remnants of the Soviet group. Most of those surrounded died or were captured, by the evening of 29 in May the fighting on the right bank of the Seversky Donets ceased, only a few centers of resistance remained.

As a result of the May 1942 operation of the year, the second attempt to liberate Kharkov ended in the tragic Barvenkowski “boiler”. In the battles near Kharkov, the irretrievable losses of the Soviet army amounted to about 300 of thousands of people, as well as serious losses were in the armament - 5060 guns and mortars, 775 tanks and hundreds of aircraft. According to German data, 229 of thousands of people were captured.

The encirclement and subsequent destruction of the large forces of the Soviet forces in the Barvenkovo ​​ledge led to the fact that the defense in the zone of the South-Western and Southern Fronts was radically weakened. This made it easier for the German command to carry out the pre-planned operation "Blau" for a strategic attack on the oil fields of the Caucasus and created the prerequisites for access to Stalingrad and the Volga.