About ammunition, army pistols and submachine guns in the RF Armed Forces

Huge impact on the development of small arms weapons in Russia and in the world widespread means of individual armor protection (NIB) fighters - body armor. Continuous improvement of body armor has led to the fact that many samples of modern weapons are no longer able to break through individual armor at any acceptable range. To solve this problem, there are two ways: the first is the improvement of existing ammunition, the second is the creation of completely new ammunition.

The 6,8x43 mm cartridge Remington SPC (left) compared with the standard US Army cartridge 5,56x45, telescopic ammunition is also considered as an ammunition of promising small arms - the LSAT promising light machine gun (on the right)

As part of the creation of new ammunition in the United States and NATO countries, the transition to a new unified rifle ammunition of the caliber 6,8 mm is being considered.

To armor crews of armored vehicles and fighters of auxiliary units, the concept of personal defense weapon (PDW) was developed, including new small-sized ammunition of the caliber 4,6-5,7 mm and weapons under them, capable of hitting targets protected by NIB, at a distance of up to 200 m. 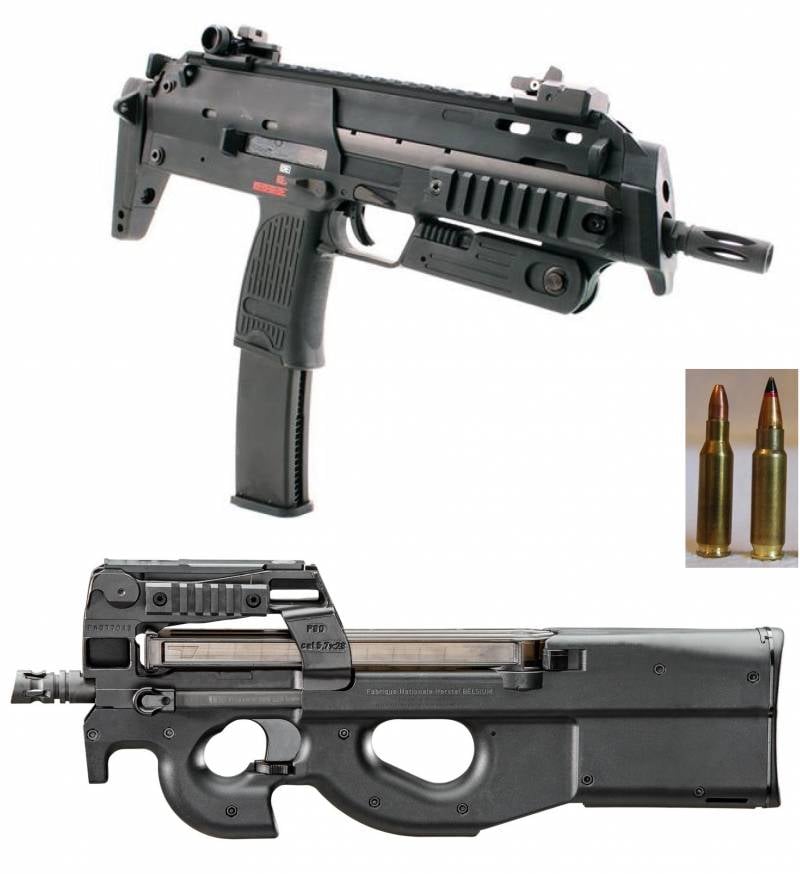 In Russia, such examples include the armor-piercing cartridge of the caliber 9X21 mm (7Н29) used in the CP-1 Gyurza pistol (Serdyukov self-loading pistol - ATP / Vector / 653) and in the new Udav pistol.

An alternative is to increase the armor penetration of existing ammunition - the introduction of heat-strengthened cores into the design, an increase in the powder charge. As an illustrative example of this approach, you can specify the domestic cartridges 7X21 and 7X31 caliber 9X19 mm.

Which approach can be considered preferable? Each of them has its advantages and disadvantages. Modernization of existing ammunition is cheaper, because along with new ammunition, previously released ammunition lying in stocks can also be used. Also, in some cases, existing weapons can be used, if their design can withstand reinforced ammunition. On the other hand, often the new ammunition is too powerful for existing weapons, which in any case needs to be replaced with new weapons. Accidental or deliberate use of reinforced ammunition in old weapons can lead to its failure and injury to the shooter. In addition, in the rigidly defined dimensions of the "old" ammunition, developers may be limited in choosing the most effective design solutions.

In turn, when creating a new ammunition from scratch, all the latest advances in materials science can be implemented, the optimal weight and size parameters of promising ammunition can be selected. Eliminates the possibility of the use of new ammunition in obsolete weapons.

Thus, the modernization of obsolete ammunition can be considered effective only until the replacement of weapons is required due to a significant change in the tactical and technical characteristics (TTX) of the new ammunition. Otherwise, the creation of a completely new weapon-cartridge complex can be considered the most optimal solution.

A little earlier, we already considered the adventures of an army pistol in Russia, set forth in first and in second parts. Accordingly, we saw that many candidates were considered for the role of the army pistol of the armed forces of the Russian Federation. Based on the information available for study, the most likely candidate for this role is the Lebedev pistol developed by the Kalashnikov Concern in full (PL-15) and shortened (PL-15К) versions. 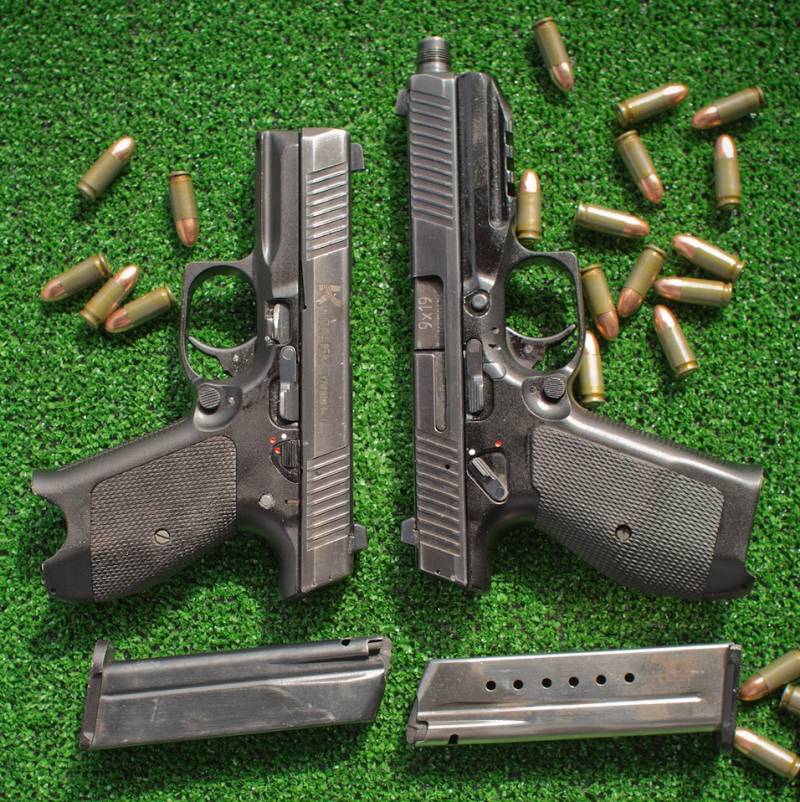 Prospective army pistols, supposed to replace the Makarov pistol, are often criticized for their large size and weight compared to the latter. Along with the never-finished GS-18 pistol, the PL-15K pistol can be considered the most burdensome models for continuous wearing.

Meanwhile, suddenly in all the media there was information about the adoption of the gun "Boa" under the cartridge 9x21 mm. In general, the very procedure for choosing an army pistol without a competition raises many questions. In addition, this weapon turned out to be quite large and will certainly cause complaints from users with constant wear.

It can be assumed that the Boa constrictor pistol will occupy the niche of the CP-1 Gyurza pistol and will become a weapon of special units, but at the same time, the following is indicated on the Rostec concern website:
The Russian army in the near future may get a new gun. Specialists TsNIItochmash was developed "Boa", which is designed to replace the legendary PM. The gun passed all state tests, and the decision to launch it in the series will be made very soon - in March 2019 of the year.

Which gun will ultimately become the most massive in the Russian army, time will ultimately show. It is possible that there were some problems with the Lebedev pistol during the tests, and we won’t see the PL-15 / PL-15K pistols at all, or it is possible that the information on the Rostec website was not posted correctly, and the PL-15 / PL- pistols 15K will become the main army pistol of the Russian Federation, while the “Boa” pistol will occupy the niche of special forces weapons.

Another question arises about the need to develop and manufacture a separate ammunition (ammunition family) of the caliber 9x21 mm, whose characteristics are similar to armor-piercing versions of the much more common caliber 9x19 mm. 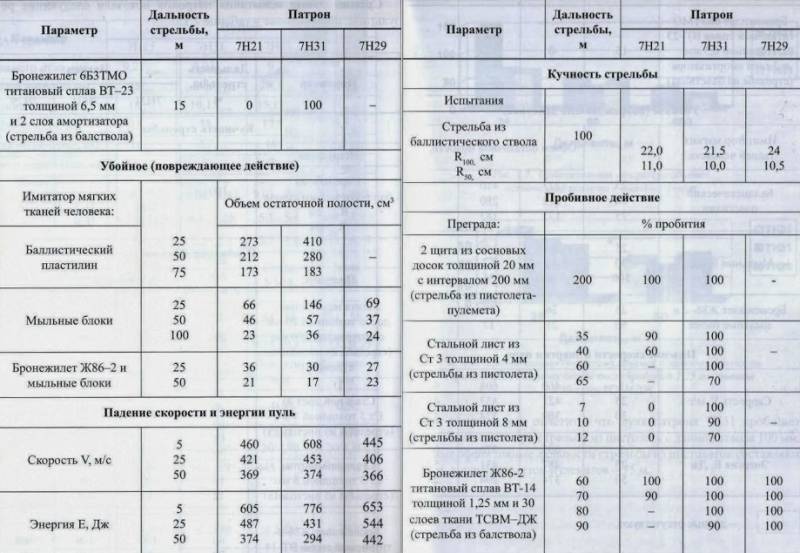 Given that all Russian, supposedly army, pistols are designed to work with the 7X21 cartridge at least, there is no problem of destruction of weapons due to improper ammunition, and the need to distribute another 9X21 mm ammunition raises certain doubts.

The niche of submachine guns in Russia has always been extremely specific. In the west, this is a fairly common weapon of the police and special services, just remember the well-known German Heckler & Koch MP5 or the Israeli UZI.

In the post-war period, submachine guns were not used in the USSR, their niche was firmly occupied by the shortened Kalashnikov assault rifle - the AKS-74U, which was issued (issued?) Even to police patrol officers (PPS).

The first samples of Soviet / Russian submachine guns began to be developed at the end of the 80's and the beginning of the 90's. Sometimes these were reworkings of the same Kalashnikov assault rifle, such as, for example, the Bison submachine gun, sometimes completely new developments of varying degrees of success. 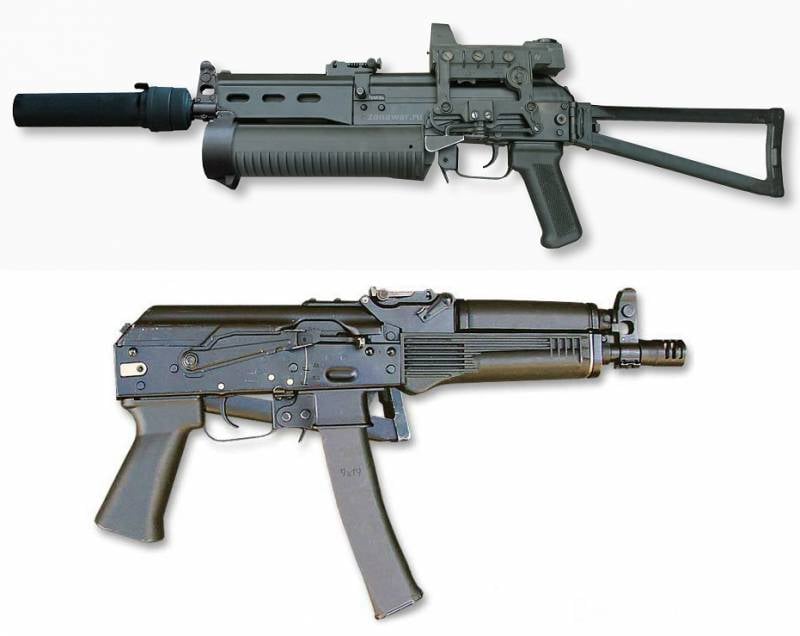 Initially, the niche of Russian submachine guns was quite limited, perhaps due in large part to the financial difficulties of the 90's. Over time, machine gun pistols occupied their limited niche in the structures of the Ministry of Internal Affairs, the Federal Service of Court Bailiffs, the FSO, the FSB, the FSNP, the FSIN and other law enforcement agencies. Inhabitants most often can see submachine guns from collectors working with ATMs or taking revenues in supermarkets and gas stations. 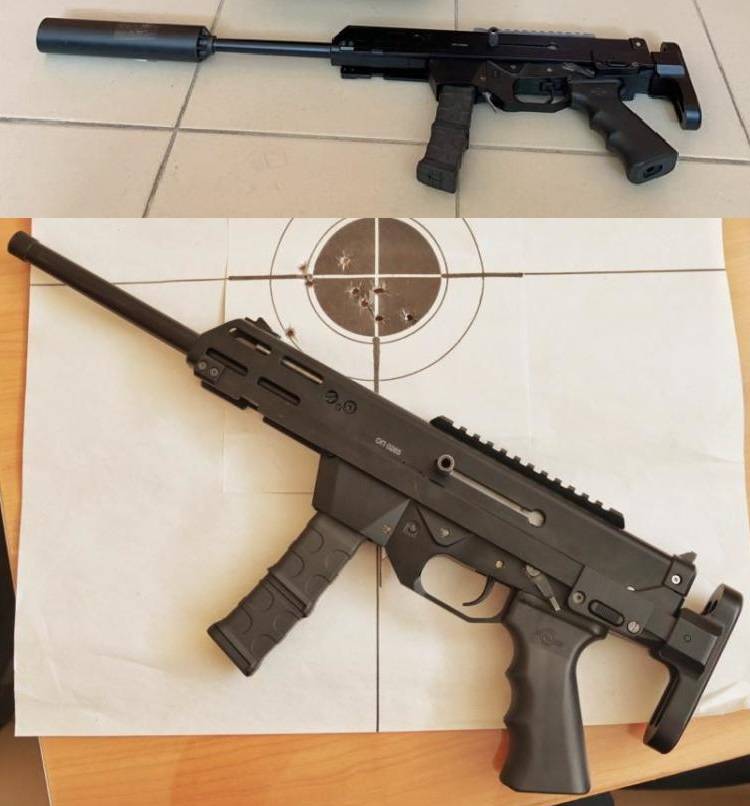 Another candidate for promotion to the power structures of the Russian Federation is the Agishevsky submachine gun 9x19, manufactured by the Hammer-Weapon factory, supposedly originally intended for the civilian market

But in the armed forces of the Russian Federation submachine guns did not receive distribution. The emergency reserve of pilots includes a Stechkin pistol and / or an AKS-74U assault rifle, the situation is similar for armored crews (pistols + a shortened assault rifle).

If we talk about the crews of armored vehicles, for which the risk of being in the thick of the combined arms battle is high enough, then talking about any submachine guns is simply irresponsible. In the end, find in tank the place for three full-sized Kalashnikovs, or their modern shortened versions like AK-104 / AK-105, is quite real.

But with the pilots the situation is more complicated. In August 2019, there was information that they wanted to replace the AKS-74U, replacing it with a lighter and more compact submachine gun PP-2000. 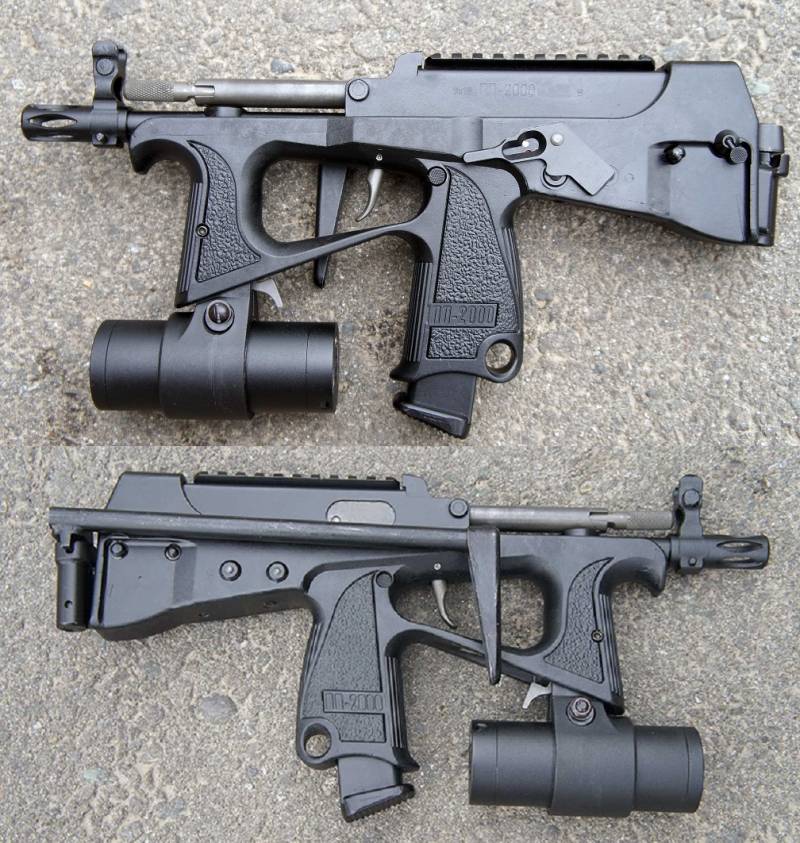 What will this give from a practical point of view? Will the flight range increase by 100 meters or the ammunition of an air gun on 5 shells? What will the pilot get as a result of this replacement? Lesser firepower and less common ammunition?

Let's try to see the situation from the tasks being solved. A pilot can only be on the ground if his plane / helicopter is shot down or he crashes for technical reasons. In this case, the pilot enters hostile territory, with significant numerical and fire superiority of the enemy. Accordingly, camouflage will be the pilot’s best ally, and fighting the pilot is best only if absolutely necessary, taking into account the minimum unmasking of his position, which requires a silencer on the weapon. Another significant factor is the extreme limited ammunition, which most likely will be nowhere to be replenished, which implies the need to ensure high-precision shooting, high ammunition striking properties and the presence of an optical sight on weapons.

Does Russia have weapons suitable for these requirements? Of course. These are silent sniper rifles 6П29 "Vintorez" and VSK-94, machine guns 6П30 "Shaft" and 9А-91 under the powerful cartridges 9х39. In combination with a simple and reliable optical sight of small magnification, possibly with an additional nozzle for shooting in the dark, with armor-piercing rounds in the kit, this weapon can significantly increase the chances of pilots to survive in hostile territory. Given the presence of two developers / manufacturers, it is quite possible to hold a competition and, based on its results, choose the most optimal option. It is not clear why such an obvious solution was not implemented as far back as 25 years ago, when all these weapons only appeared. 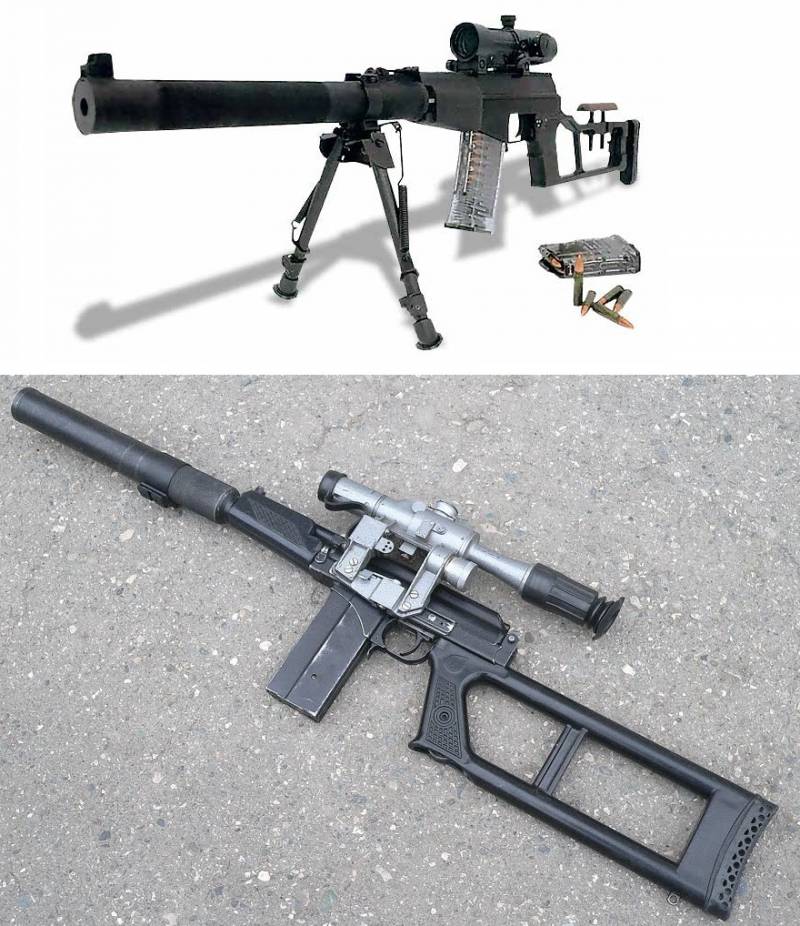 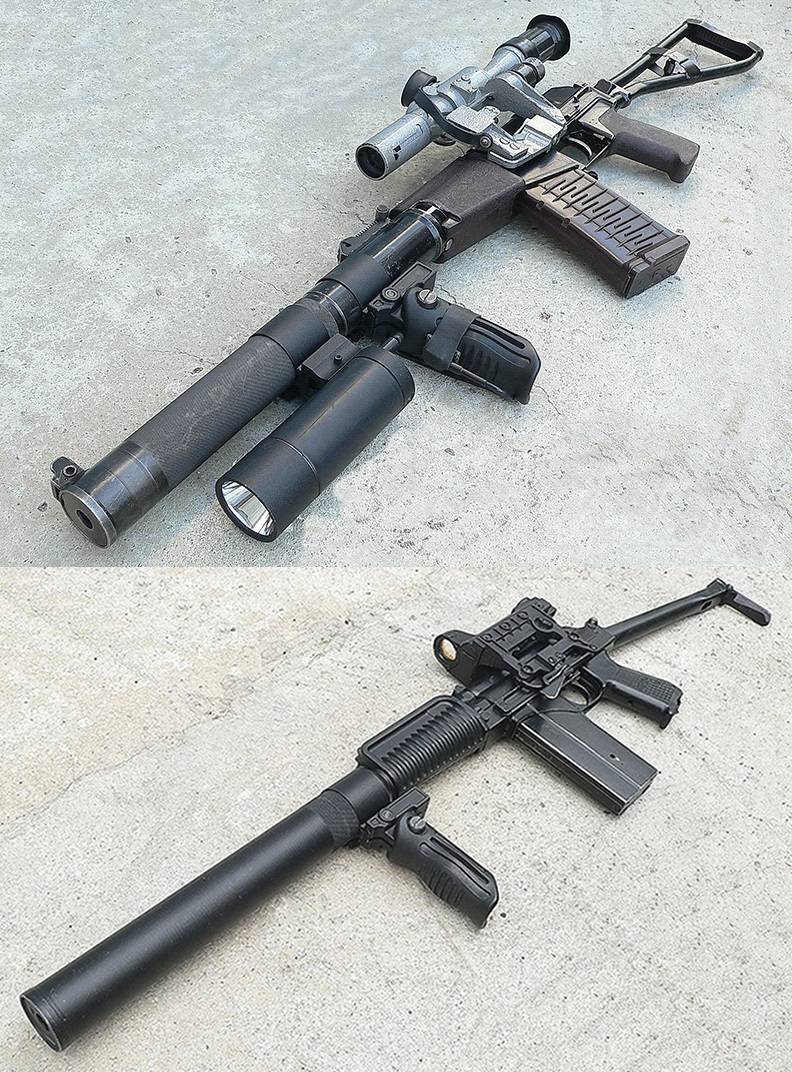 A submachine guns for a pistol cartridge is best left to those who use them at present, they have absolutely nothing to do in the army.

In the next article, we will consider what a promising army pistol can be in the context of the PDW concept.