Big Idlib. The imminent advance of the Syrian Arab army is inevitable

After more than 8-year war, the province of Idlib and its surrounding areas remain the key stronghold of radical militants in Syria. In recent years, anti-government armed groups have suffered a number of defeats across the country and retreated to northwestern Syria. The decision of the Syrian army to allow the surrounded militants to go in the direction of Idlib saved the thousands of civilians who were used by the latter as a human shield in areas such as the cities of Aleppo and East Ghouta. At the same time, this significantly increased the already high concentration of Islamists in Greater Idlib, turning it into a hotbed of religious radicalism and terrorism. 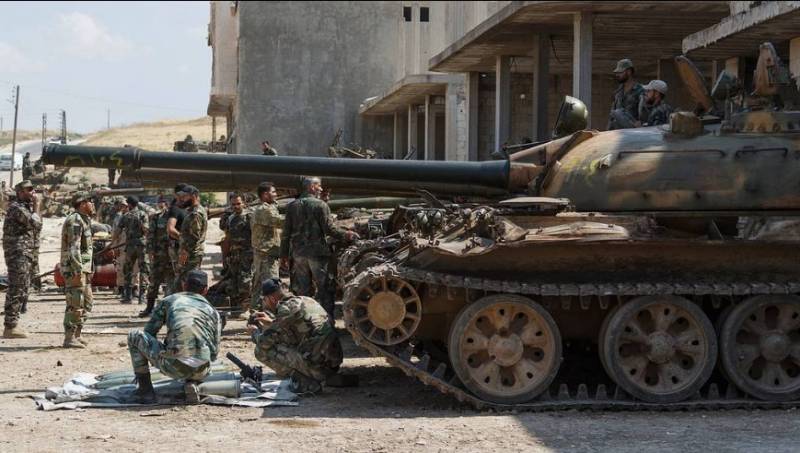 The subsequent attempts to separate the radicals from the so-called moderate opposition and then neutralize them, which took place within the framework of the Astana format with the participation of Turkey, Syria, Iran and Russia, were unsuccessful. The network of Turkish and Russian observation posts along the contact line prevented the establishment of a proper ceasefire on the border between the government-controlled area and the territories controlled by illegal gangs. The offensive of the Syrian army in August 2019 in North Hama and southern Idlib led to the liberation of most of both provinces from the Mujahideen. However, strategically, the situation remained the same.

Idlib serves as a refuge for a number of disparate groups that are constantly fighting for influence and resources. The most notable of these are the following terrorist associations.

"Hayat Tahrir ash-Sham"* (HTS was formerly Jabhat al-Nusra *, the Syrian branch of Al-Qaeda *) - the most influential group in Greater Idlib.

The National Liberation Front is a pro-Turkish military alliance created around Ahrar al-Sham * * to be an alternative force of the KhTS * and to promote Turkish interests in this part of Syria.

«Hurras ad-Din pro Al Qaeda"* - a combat brigade in alliance with the HTS *. The main difference between Khurras al-Din * * and his older brother is that this group is not trying to hide its existing ties with al-Qaeda *.

Different sources cite different numbers regarding the size of the aforementioned armed groups operating in Idlib. Even the leaders of these groups themselves constantly give a contradictory, often greatly exaggerated, number of sponsored militants to increase popularity and intimidate rival gangs, receiving additional funding from Western curators. 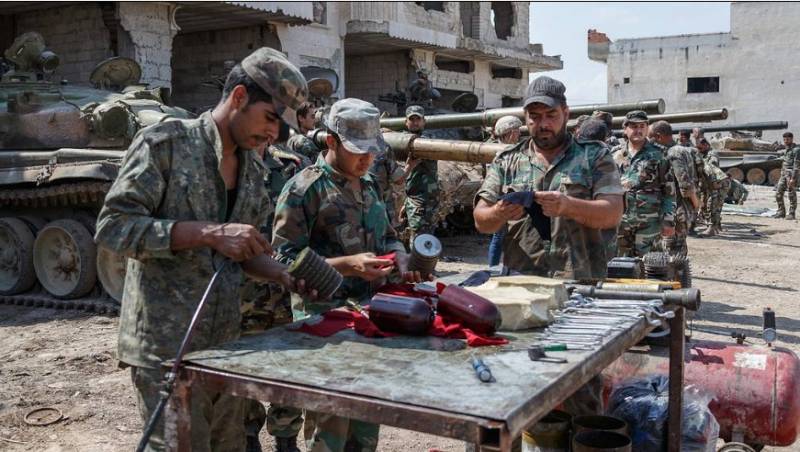 In 2018, General Joseph Dunford, chairman of the Joint Chiefs of Staff of the United States, calculated that there were about 20 — 30 thousand militants in Idlib. In the 2019 year, the UN unveiled the number in the 20 of thousands of mujahideen of the KhTS * in Idlib. Sources associated with the Islamists say that the KhTS has about 31 thousands of trunks. The same sources claim that the total number of militants in Idlib is about 60 thousand people. Most warehouses used by local terrorists weapons and ammunition, tunnel networks, repair facilities, headquarters and other infrastructure are located in the rural areas of Idlib, as well as in the cities of Sarakib and Maarrat El Numan. The militants intentionally place them near civilian areas, using the people living there as a living cover.

Despite the observed diversity of illegal gangs, none of them, apparently, can challenge the dominant position of Khayyat Tahrir al-Sham *. In the period from 2016 to 2019, the group made active efforts to strengthen its military, political and economic presence in the region. Competing groups were absorbed or simply forced to accept the rules established by the HTS *. Even unofficially supported by Ankara, the National Liberation Front, created in May 2018 of the year, could not shake the supremacy of HTS * and was forced to be content with the role of a younger brother.

In 2017, Khayyat Tahir al-Sham * created the Syrian rescue government to manage the territory of Greater Idlib. The structure of this authority included eight ministries. Among them are the Ministry of Internal Affairs, the Ministry of Justice, the Ministry of Religious Expositions, the Ministry of Health, the Ministry of Education, the municipality, and the Ministry of Economic Development. This government also has its own police force, which, however, has limited responsibilities, such as driving, catching criminals, and resolving disputes. However, any notable security efforts in the area, such as the reprisals against ISIS * cells, which have a rather complicated relationship with the main field commanders of this Syrian province, always include HTS * forces.

All this allowed Khayyat Tahir al-Sham * to take control of the economy of the region by controlling all key roads (primarily the M5 highway) and trade crossings both with Turkey and through the front line to areas controlled by the pro-government coalition. When the Al-Ais checkpoint in Aleppo province was opened, the HTS * collected taxes from those who entered and left Idlib. The group also collects taxes from people who want to leave the Idlib zone through humanitarian corridors opened by official Damascus with the help of the Russian military police.

The main source of income is the border in the area of ​​the village of Bab al-Hawa with Turkey. HTSh * introduced duties on all goods entering Idlib. These include clothing, food, fuel and its derivatives. The militants have established strong ties with a wide network of traders and are reported to have ties even to the oil company Watad, which owns a monopoly on the import of hydrocarbons from Turkey. In addition, Mujahideen collect money through direct and indirect taxes levied by taxes on businesses, shadow schemes of financial transfers and currency exchangers. Enterprises are required to comply with these conditions so that they can continue their business. Control over the flow of funds, fuel and spare parts allows the KhTSh * to be the most well-equipped and well-armed formation in Idlib, which has the largest fleet of heavy military equipment.

According to available data, part of the funding of Hayat Tahir al-Sham * comes from external sources. Most of the funds came from Salafi charitable foundations in Kuwait, Qatar, Saudi Arabia, as well as from high-ranking clergy and wealthy businessmen in Jordan and Turkey who sympathize with the ideas of Salafi Islam. According to experts, the flow from foreign sources decreased after the phase of active clashes in Syria in 2018 ceased. For the same reason, the financial flow collected by armed groups through crowdfunding on social networks has decreased. Therefore, HTS * and other illegal gangs were forced to rely more and more on local financial sources.

Before the conflict, about one and a half million people lived in Idlib province. According to the UN, currently the population in Idlib has doubled. Most of the inhabitants are Sunni Arabs plus Syrian Turks. Most members of other ethnic and religious communities, such as Shiites or Christians, were forced to flee the area or were killed by radicals controlling the province. According to reports, about 40% of people currently living in Big Idlib come from other areas previously held by militants. These are current and former members of paramilitary groups, their families and relatives. This predetermined the position of Idlib as the main center of terrorism in modern Syria.

Goal: victory of the "revolution"

From a political point of view, the vast majority of the leaders of the Idlib militant groups and related entities coordinate their policies with the position of Turkey. They publicly declare that the main goal of their efforts is the victory of the so-called Syrian revolution and the reform of the Syrian system of government in accordance with Sharia law. However, these statements are only a formal part of the official propaganda of the militants. The actions of the HTS * and its allied groups in recent years indicate that they are actually striving to create a de facto independent quasi-state under their control and a partial protectorate of Turkey. If the current situation in northwestern Syria remains the same over the next 3-5 years, it is likely that Turkey will be trapped in the conditions in which it will have to try to annex this territory. 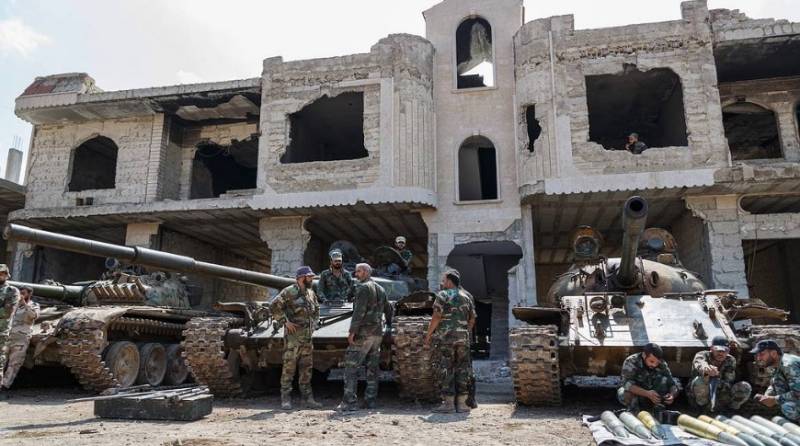 The irony of the situation is that Khayyat Tahir al-Sham * and its allies violate this scenario with their own policies. In the current context, the Idlib zone is a constant source of terrorist threats and instability. In all previous cases, when the Syrian and Pro-Syrian forces stopped offensive operations and began to unilaterally implement ceasefire agreements, Idlib armed groups, on the contrary, immediately began military operations. They attempted to seize new areas or attack pro-government forces, and also resumed preparations for terrorist operations in territories controlled by a legitimate government. In addition, the most bloodthirsty part of the so-called opposition is concentrated in the Idlib zone. The core of the "Idlib opposition" is made up of mercenaries, criminal groups and radicals. The unilateral ceasefire announced by the Syrian army in southern Idlib on 31 August is not expected to drag on for long. In the first half of September, militants have already carried out several armed attacks with unmanned aerial vehicles against the positions of the Syrian army and even the Russian air base Khmeimim.

Turkey seeks to prevent any possible government offensive in Idlib. Therefore, she advocates further diplomatic cooperation with Russia and Iran in order to facilitate a “non-military” solution to the issue. However, Ankara does not seem to have sufficient influence on the Idlib paramilitary groups, in particular, the KhTS * to impose a ceasefire on them at present. Turkey could take control of the situation, but it would take a year or two, which it does not have. Therefore, judging by what is happening in the region, a new round of military escalation in the Idlib zone is just around the corner, and the units of the Syrian Arab army are destined to solo in it.

* A terrorist organization banned in the Russian Federation.