You yourself decided, you chose 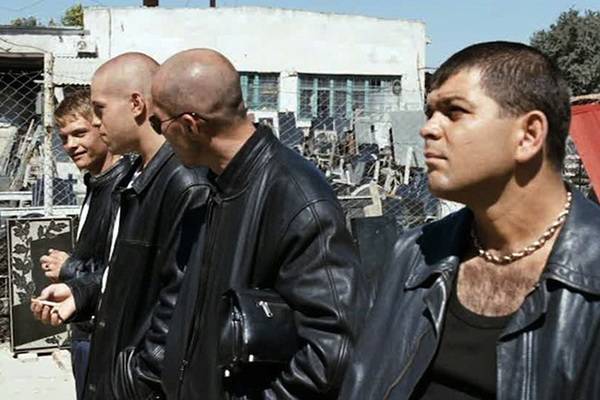 The following Monday came, in the morning the commanders gathered at the headquarters meeting. We reported on the guard duty, suggested that the director, through the police chief, immediately recognize and inform when the farmers will return to the district center. But everything went somehow sullenly, intensely ... When all the questions were resolved, the Kremlin man said that the matter was wrong, the mood was falling, the men were angry at each other and began to wrangle with the commanders, as if everything had not broken. The husband immediately froze and slept from his face! But the director demanded details and gradually found out that the men, both on guard and free, began to throw themselves at each other, and at the commanders with screams that they were watching everyone, but they themselves probably were drinking quietly. Having figured it out, the director immediately laughed with relief, saying that, of course, everyone had a whole week without a drop in their tongue! When was this ?! Then he said that the evening of the morning is wiser, at the evening headquarters we will continue this conversation ...

As everyone left, he ordered her husband to think about what he would command at the evening headquarters, and he sat down in a state farm gas and left somewhere. The husband went darker than the clouds until the evening, but he did not give up and prepared for the evening. The director was absent for an hour and a half, and when he returned, he did not go to the board, but to his home, after which the day went as usual. In the evening, in front of the headquarters, the director, along with his chauffeur, dragged something heavy and put it in a corner. The commanders gathered, wanted to start their reports, and the director gets up and asks to wait a bit, then tells me to go to the corner where there was something covered with a cloth that had been dragged with the driver. I opened, and this is a box with bottles of beer! The director told me to give each commander a bottle and took it out of my pocket. Joy was full of pants! And the director of the nightingale taldychit: everyone who changes from the guard will now receive a bottle of beer, and in the guard, every man is in turn. Now we will reward with bottles of beer for differences in service and at work, let them try. Beer is not vodka, and it will be possible to get a little, but there is something to rejoice slightly, to calm nerves. Then the director said that he would take the beer from the Tajiks, and agreed to pay for it not with real money, but with state farm products for their tavern: tomatoes, herbs, cucumbers, potatoes, berries and apples for compote, and especially meat. "Tajiks" is profitable, do not once again go to the district center to the bazaar.

Oh, and this headquarters was great! Just a sight for sore eyes! The commanders laughed that through beer they would now squeeze their fighters into such discipline, even the army would envy! And really! From the next day, joyful men fussed about the fact that in the service, at work, everyone wanted to get himself a premium beer. And the women a day later, the director from the gardens and cellars of their gaziks to the "Tajiks" loaded, so that the beer supply is not transferred.

But all the same, without a case of filthy it could not do! The sailor could not resist. In the afternoon, he would intervene on horseback to guard the crops, but he did not knit a bast. It turned out that they had set up a moonshine still with their dad, well, they tried it at night ... This former sailor, by the way, was the youngest in age of all the men who got up under arms. In general, they gave this fool to sleep until the evening, so that he could begin to think. And in the evening they dragged him to the headquarters, sentenced him to three extraordinary guards without beer, swore and put his finger under his eyes in a flash so that he remembered the naval service, salab! But he didn’t take offense at all, beat himself in the chest, tried to tear the vest and yelled: "Brothers! I will atone! Damn it! I won’t let you down! Let's give any order!" The moonshine was taken from them until peacetime and forced the sailor's dad to drive the pervach right in the board under the supervision of a paramedic so that there was a supply of alcohol for medical needs, this director came up with it.

The farmers are back!

On Friday, the police chief called the director from the district: the farmers returned! So, wait on Sunday, as they promised. The headquarters meetings became longer and more secret, the commanders after them instructed the peasants, and those at home already had their women and children. The main thing is that everyone was fussing and trying so that the farmers did not understand anything, did not smell anything ahead of time.

And then Sunday came, at 11 of the hours the farmers showed up on the Volga primer, only the Volga ... The husband breathed a sigh of relief, he was very afraid that they would immediately come with bandits if they found out about our preparations. As the farmers entered the village, everything seemed to have died out, not a soul in the streets. They first drove up to their store, took the proceeds, talked with the seller. And then to our house ... They came to us, sat down with their husband at the table and began:
"Gavrilych, well done! Well, the seller said that we weren’t buying vodka! Consider people! Well, that’s what we decided; this year you’ll just pay for the security, and if you raise your farm, then next year we’ll take you as equal companions, raise the whole region, and let someone just dare to laugh against you, we will educate all at once and forever. So now, if someone starts speaking, will you blink! Or what? any questions?"

The husband was silent for a while, looked at them as if he had shot with his eyes, and said, cut off that he had no questions and did not want to have any business with them. The farmers immediately brutalized their faces, got up and went out, just blundered along the way: “You decided it yourself, you chose it ...” Then again we drove to the store and scooped out our entire supply of vodka from it into our car, the trunk was full and the back seat. And the seller was loudly told so that, supposedly, while the people were going to Gavrilych for a drink, they drove away with that. And ours immediately began to fuss, an extraordinary headquarters escaped. On it, the husband told everything, especially he pressured how the farmers suggested the people to intimidate him. The commanders gritted their teeth. We agreed to get together in the evening, but for now we went to bring to our teams news, and the director went with them, so that the peasants would better understand what these bastards consider them to be what for and what dirt.

At the evening headquarters, the commanders and the director reported that our men were just eager to break the farmers with their bandits, now people need not be inspired, but restrained, reassured so that they would not do anything stupid. The husband said that the farmers did not guess about anything, therefore, they would come in small numbers to punish only him alone. They will not pull, wait for them in the coming days or nights. Therefore, it is necessary near the highway, where our primer begins, put up a masked post that tells how they will begin to drive up.

In the attic yes in the barn

I must say that when my husband left the army, he agreed and took out a bunch of all military and technical junk from his regiment. The entire attic was filled with it and the half-sheds. All kinds of pieces of iron, then they later adapted with the men in the repair shops for all kinds of things, they restored a lot of equipment with them, the same state farm gas, for example. In the junk of this were two broken military radio stations that soldiers were carrying behind them. The husband repaired them, adapted them so that they could work not only from batteries, but also from an outlet. He put one in the board, and the other could be carried everywhere by car and talk to the board.

So, before dawn the next day, three fighters were brought to the highway, among them the sailor who had just done wrong, he’s on navy was a radio operator. Water approaches the highway on the other side of the primer from the Volga, well, not water, but very, very long ago they dug a canal and threw it away. It has become overgrown with bushes and cattail, it is impossible to drive a boat, but all living creatures have divorced in it. Full of fish, ducks nested, even muskrats and turtles came across. Travelers there like to put up tents and go fishing. So the husband gave the soldiers a military tent, also from their junk, and a radio station, they also had mattresses with blankets. They were located near the entrance to the primer, sort of like tourists, and they themselves began to watch the road day and night in turn with binoculars. And the director brought them food in the afternoon that the wives would cook. At the state farm, on the board, they established round-the-clock duty also at the radio station, three fighters and two vests, sons of the Kremlin man, on duty in shifts.

Meetings of the headquarters became top secret, they drove everyone out of the board, and so that no one could even smell nearby. After the headquarters, the husband and commanders walked in circles each time near our house and the neighbors nearby, talking quietly about something. They were very worried that the bandits could appear at night ... But we were lucky! The farmers, you see, have become completely insolent, in Turkey they have gotten angry and did not want to deprive themselves of a night’s sleep!

In short, on the second day, at eleven o’clock, the post announced that they were going. On the Volga and UAZ highway. They began to act as ordered ... I with my son and other neighbor women quickly went to the other end of the village in the house where we should be. And towards them the men with rifles were already hurrying and taking their places. The director quickly phoned the district center and also went away.