And the judges - what?

20 September 2019
366
Deliberately replaced the word “justice” with “judicial system”. In recent years, more and more, many in the country have the impression that with justice ... we are not very “right”. 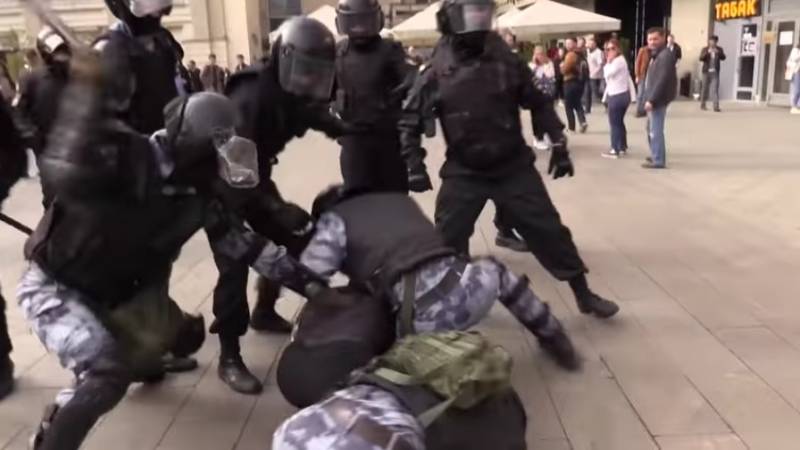 Although, as one of our cheers-patriotic readers said, “do not be a liberal, and the Russian Guard is not afraid of you.”

I doubt it. We will leave Rosguard alone, but for now. But let's talk about the courts.

Today, in Russia, another case, openly fabricated, is heard. For what purpose it is difficult to understand. But they already say that Pavel Ustinov is quite on the way to becoming the second Ivan Golunov.

Ustinov was convicted at 3,5 of the year for "attacking an employee of the Russian Guard." Despite the fact that there was a lot of evidence to the contrary, including the operational shooting of the Rosguard itself.

The judge simply ignored this evidence and refused to consider it. Ustinov received a sentence, respectively, the case received publicity thanks to the support of the acting guild and reached the Kremlin.

The Kremlin seemed to have watched the video, Peskov spoke at an official level, but did not say anything interesting. “The Kremlin cannot influence the court’s decision” and all that sort of thing.

Well, yes, of course, it is necessary to demonstrate what an impartial court we have ...

Tradition, of course, is fresh, but for some reason it is believed with great difficulty. And first of all, because, according to relevant sources, including human rights sources, today we do not pass acquittals.

Examples are thousands, if not tens of thousands.

Yes, someone almost immediately goes on parole, we will not point fingers at Vasiliev, Mamaev, Kokorin, or even some people don’t even get to court. "Some" are those who are "their own." Which is not abandoned today.

And there are those who sit down and sit in any situation, except one.

The organizer of the “Russian Spring” in Sevastopol, Gennady Basov, was sitting for not taking a bribe. He sat down by Dmitry Gorin, who we defended, and received the punishment of the wife of Novikov, who miraculously did not “kill” a police officer.

In general, recently, in the light of this strange “law” on the protection of employees of organs, a strange picture has been obtained. With the selection of personnel, we are simply in trouble. These are recruited according to the announcements of employees to the police and the Russian Guard, that they are simply beaten, humiliated and insulted.

What can I say if Novikova, who had a baby in her arms, was so stumbled by a police officer that he was forced to seek medical help? True, he did not succeed in clearly proving that he was beaten by Novikova, but the judge did not care, and the Novikovs received their terms.

And since they are not actors and not journalists, then, accordingly, no one went to the Kremlin with their problem.

And in the “era of mercy” of the Vainer brothers, Sharapov said that if the law is applied the way one wants, it is no longer a law, but a brush.

Considering how this “law” is being implemented today, how the police, Rosgvardiyskie and investigative officers hide their violations of the law, it turns out that here it is, a brush for the people.

Judge for yourself, here are the numbers and facts.

What are these numbers talking about? About much. Someone may say that the Russians massively went crazy and began to physically attack and verbally abuse the authorities. But it looks more like the judges just started “riveting” these articles at a Stakhanov pace.

And separately I ask you to pay attention to how many people were justified.

Acquittal. Sentences. No. I. Not. Will be.

From last year's data, this can be seen quite clearly.

I wonder how it will be in the future? It is clear that anonymous representatives in masks and helmets from Rosguard will still grab everyone in a row, regardless of whether a person came to an unregistered rally or just stood by the subway.

And the courts will instantly stamp sentences.

By the way, the fact that Ustinov just stood by the subway and waited for the convoy to pass through clearly follows from the video materials presented to the court. But the judge did not deign to get acquainted with them, and Ustinov received his sentence.

But there’s nothing, you know, to go out into the streets when the Russian Guard is willing to work.

In general, from the practice of recent years, it follows that if representatives of the Russian Guard have approached you, you need to quickly collapse into the mud, it is advisable to beat their shoes so that you have something to answer in court and wait for your sentence.

And the court will try to make the verdict as fair as possible.

But excuse me, even Secretary of the General Council of the United Russia party, vice speaker of the Federation Council Andrei Turchak, saw that Ustinov was "out of business"! And he publicly called the verdict unfair. According to Turchak, the video proves Ustinov's innocence. But according to the judge - no.

Or the secretary of the EP General Council has a conscience, but the judge is somewhat incomprehensible.

In general, Turchak’s words that “that the guy was just standing near the metro” are strong. And from such a high-ranking "United Russia" - and in general.

Turchak also noted that, despite the fact that an officer of the Russian National Guard stumbled and fell during the detention, the video records indicate that Ustinov “didn’t attack, push, even touch”.

And the court, our entire so fair Russian court, refused to consider the video with Ustinov’s detention, which shows how Ustinov is standing with the phone in his hands and headphones. A man at all could talk and not see that the Rosgvardi’s were rushing towards him.

As a result, they simply shot him down, but what about the fact that there was another unlucky little hand to his own hand, Ustinov, then what?

Naturally, colleagues in the shop went to the defense. Immediately, our main lawyer for the authorities, Mr. Solovyov, came out, with just remarkable support for the court’s decision, they say, one shouldn’t directly defend Ustinov so blindly. Then, however, Vladimir Rudolfovich turned on the rear speed, slightly changing his position.

However, we are again holding a resonant case, which is likely to be reviewed in favor of Ustinov. I sincerely hope so.

In general, to what extent is our court today professional, independent, non-corrupt and fair?

I am sure that every word can be safely quoted.

Our court is really independent. From nothing, and especially from the people. And the Russian court has long ceased to be popular, as it was during the USSR, and became state.

If we again turn to the numbers, today the court zealously defends the interests of the state. And citizens actually have no opportunity to prove their innocence.

But the drunk judge, who got behind the wheel and being "in the arc", has every right to bring down a citizen. And he will not be anything. He, the judge, is now beyond judgment. And even if it is under jurisdiction, then among colleagues. And as you know, a raven will not peck out a raven's eye.

About professionalism, too, legends can already be made up. The observed cases show that one can simply be touched by looking at how our judges stubbornly "do not see" violations by public servants.

The Russian state court today has become a kind of closed structure where people "from the outside" simply cannot get. But the children and relatives of those already serving there - easily. And everyone in sweat works for the good of the state. The results are in the table.

And what do we get?

It turns out that the Russian people are really driven into a dead end. And in this impasse, the choice, in fact, is not rich. Or you are heartfelt, praising everything that happens in the country (as a fair number of our readers do) and you like inflation, rising prices, unemployment, pension robberies (in the future, another cumulative experiment), corruption, theft and other pleasures of today ( you don’t have to speak, rather tacit approval), or you are not ours and welcome to the system where the Russian Guard, the police and the court will quickly teach you how to be happy with everything.

Here you have in fact another episode of modern repression, which simply received publicity. And how many such episodes in the field is hard to say. But you can get behind bars simply because the corresponding employees did not like you. And there’s no chance.

Here the word "repression" I used for a reason. Figures are a stubborn thing. They are planting.

Now one of the “same ones” will have prepared a phrase like “there is nothing to go to unauthorized rallies, and there will be no problems”.

Well yes, it really won't. But now, as practice has shown, you can not go to the rally, but get three and a half years.

Actually, everything that happened is the result of the clumsy work of law enforcement and the pro-state judiciary.

And the result is quite predictable: the society is annoyed by the next repressive episode, and even the representative (very influential) of the party in power disagrees with the court decision.

The completely unprofessionally working Rosguard and absolutely blind court are not the pillars of democracy that we should rely on if we are talking about the social society of a developed country.

This, excuse me, is more like the working attributes of the power of a police state. And nothing can be done about it, alas. We have what we have.