19 September 2019
52
The fifth-generation export model of the Su-57E fighter is the latest combat aircraft of the Russian military space forces. Its performance characteristics allow it to carry out any combat missions in the most difficult weather conditions. At the same time, Sukhoi can attack both air targets at oncoming courses or “beyond the horizon”, and ground targets. According to the Chinese edition of Sina, the 5 fighter of the Su-57 generation of the Russian Aerospace Forces can operate in automatic mode at almost 100%. 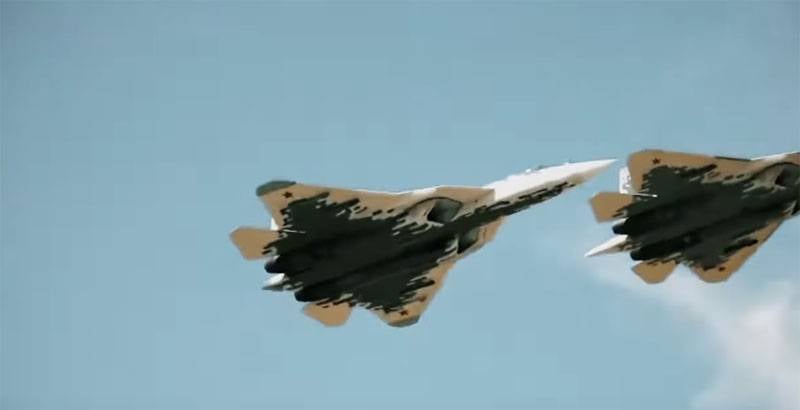 This model of Sukhoi Design Bureau was developed as an invisible aircraft. Compared with the fourth generation of fighters, the Su-57 has reduced visibility in the radar and infrared ranges. Additional advantages of fifth-generation fighters in relation to their predecessors are more radio-protected avionics and all types weapons on board the aircraft, as well as its cruising speed in supersonic mode.

In addition, the Su-57E surpasses all 4 ++ generation fighters in other key combat and aerodynamic characteristics. To begin with, it is more multifunctional. It fully implements the concept of combining automation and “artificial intelligence” technologies in air combat. At the same time, the fighter’s arsenal includes high-precision guided long-range missiles, with which the pilot can aim and destroy several targets at once. And last but not least, the exceptional maneuverability of this aircraft.

Obviously, the most advanced innovation of this military equipment of the domestic aviation industry is the “artificial intelligence” (AI) technology, which is the basis of the Su-57E information management system. It is the use of AI that provides an unprecedentedly high degree of automation of the latest Sukhoi Design Bureau fighter. Based on the performance characteristics of the aircraft, it can solve up to 90% of the tasks in automatic mode. This is really one of the best indicators to date.

With such autonomous work, the pilot selects the best solution from the proposed list of actions. While the final choice still remains with the pilot, as well as his decision to press the trigger at one time or another. True, there is an option for a fully autonomous flight of the aircraft according to the program laid on the ground. In this case, the commander of the Su-57 will only determine the best moment of the beginning of the attack. Moreover, in critical cases of loss of consciousness or serious injury to the pilot, the autonomous on-board control will be able to save the fighter.

Aircraft at this level of technology are closely approaching unmanned aerial vehicles with a maximum degree of robotization and autonomy. A central role in such aircraft technology is played by its electronic “brains” - the “information management system” (IMS).

IMS is a set of on-board software (software), in which the maximum knowledge of specialized design engineers and the real experience of a large number of professional pilots are embedded. In another way, this system is called an “invisible pilot” or “electronic pilot”. Moreover, in other areas of industry, such complexes are also actively developed and applied, often calling them "expert systems." So the Su-57 IMS is like the newest militaryaviation "Expert system".

The primary task of the IMS software suite is the constant recording of data from on-board sensors and devices about the enemy within the identification radius, a comprehensive analysis of this input information and the development of a number of pilot recommendations for further actions. Computers of modern avionics cope with these tasks quite easily. But the choice of the final decision is still up to the pilot, who at the same time relies on his personal experience and professional training.

Work in this direction began about 15 years ago, when there were no expert systems in the field of aviation at all. The project manager for the development of the domestic information and control system of the aircraft was Dmitry Gribov. He recalled that there were plenty of problems in creating aviation expert systems, up to the lack of reliable computer peripherals. However, despite this, now the artificial intelligence of the IMS Su-57 already knows how, after processing the data collected by the on-board sensors, to give the pilot a set of optimized solutions.

So, now on-board fighter systems can accurately assess the degree of threat of a particular missile, and based on this analysis, the ICS offers the pilot options for evading or destroying, in fact, a flying target. This significantly increases the combat effectiveness of the aircraft.

It is noteworthy that in the pre-computer era, the cost of any aircraft was determined only by the price of its "hardware" - construction and equipment. But at the moment, the software and on-board electronics of the aircraft can be several orders of magnitude more expensive than the rest of the aircraft equipment. It is logical that, starting with the Su-57 with its powerful artificial intelligence IMS, the cost of on-board software began to be included in the total design cost of aircraft.