Calories for the Third Reich

Herbert Ernst Bakke - one of the little-known war criminals of the Third Reich, who managed to avoid well-deserved punishment. Obergruppenfuhrer SS hanged himself in early April 1947 in the cell of Nuremberg prison, without waiting for extradition to the Soviet Union. This person (incidentally, a native of Batumi) has been holding the high post of Reich Minister of Agriculture and Food since 1942, responsible for the cannibalistic policy of killing millions of people by starvation. He even had attempts on scientific activity - in the mid-20-s he wrote a dissertation entitled Die Russische Getreidewirtschaftals Grundlage der Land- und Volkswirtschaft Russlands, in which he described in detail grain growing in the USSR. Since then, Herbert has been breathing very unevenly towards fertile Ukraine. In many ways, his work (which, by the way, he did not defend) became the handbook of the invaders in assessing the agricultural resources of the Soviet Union in the early 40's. 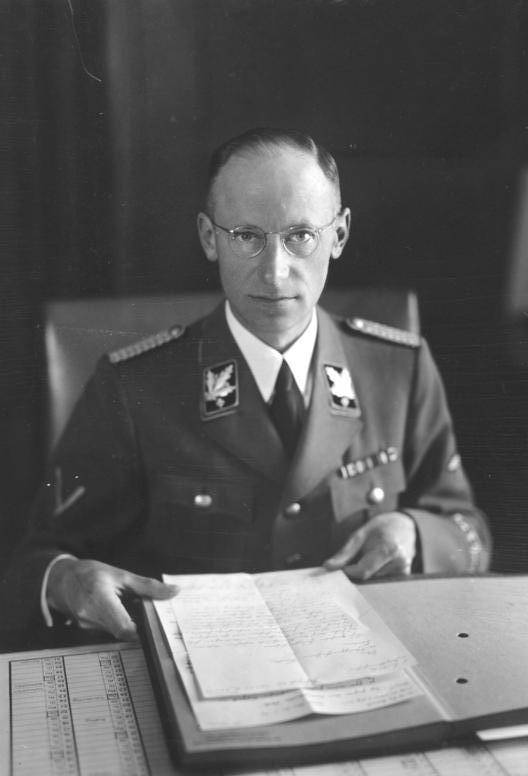 There was another document called the "12 Commandments of Bakke" (dated 1 June 1941 years) and was intended for German officials working in the eastern lands. You can find the following expressions in it:
Quick solutions are required of you (the wrong solution is better than none).
Russians always want to be the mass that they rule. The entry of the Germans will also affect them. Then their wish will be fulfilled: "Come and rule us."
Poverty, hunger and unpretentiousness - the lot of Russian people for many centuries. His stomach will digest everything, and therefore no false compassion. Do not try to approach it with the German standard of living as a measure and change the Russian way of life.

One of the main provisions of the Bakke Plan was the seizure of food from the conquered territories in volumes exceeding the needs of the indigenous population. In territories controlled by the Germans, food standards, for example, for Jews, amounted to only 184 units in terms of calories. Poles received about 700 calories, and the German population received more than 2600 calories. This scheme very well reflected the practical approach of the Germans to clean up living space - controlled hunger simultaneously fed the German population and killed millions in the East.

In the previous part stories we touched on the problem of forced import of labor for the needs of the Third Reich, which, of course, needed to be fed somehow. In the book “The Price of Destruction,” Adam Tuz points to some contradictions between the ideological dogmas of the destruction of the Slavs with the Jews and, at the same time, an acute shortage of labor. According to the same book, in terms of calorie imports, the situation at first also did not differ in particular consistency and logic. Already in June 1941, Reisbank issued a report in which it proved with mathematical precision that Germany would have nothing to profit from in the spacious agricultural fields of Ukraine. In those days, both labor productivity on collective farms and the general technological level of Soviet agriculture lagged noticeably behind European. According to Reisbank estimates, the Germans would have had to spend several years on modernization, which was then an inadmissible luxury. 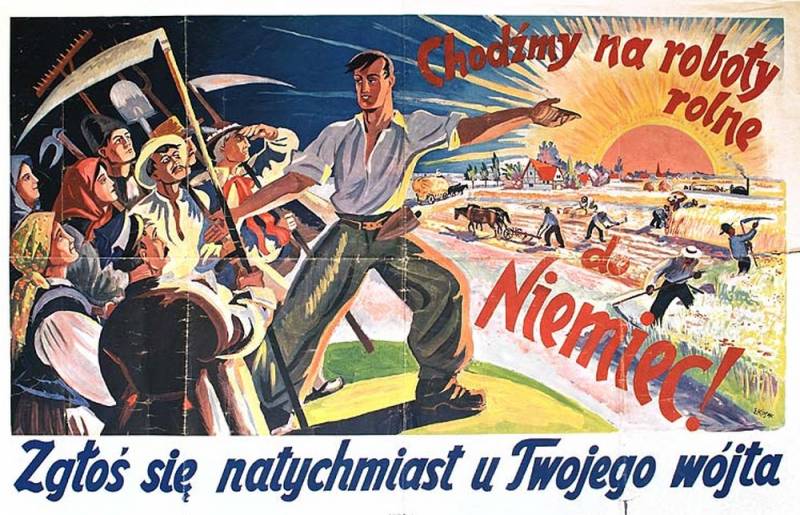 A poster calling for the harvest ... 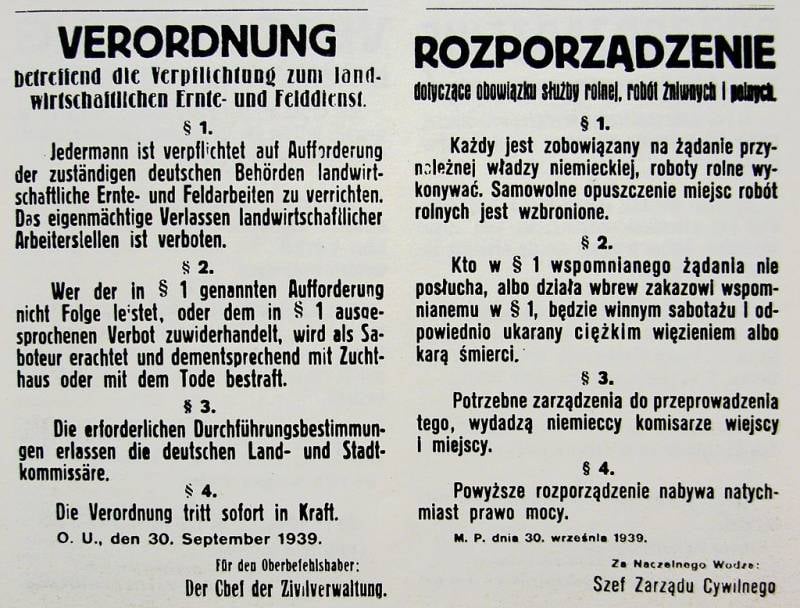 In the 1940-1941 year, the Germans in their country were able to collect 24 million tons of grain, and this was 3,5 million tons less than a year earlier. Together with stocks and imports in Germany at that time there were almost 34 million tons of grain. The management had to use reserves and reduce the number of pigs, which led to a reduction in the supply of meat to the population by the end of the 1942 year. And then Goering, with his order on the delivery of labor from the eastern territories - the Third Reich, as mentioned earlier, lacked workers. Bakke, already aware that Ukraine’s grain reserves were too exaggerated, protested. Like, there’s nothing to feed, we don’t even have enough food for prisoners of war, and here there are also ostarbeiters. To which Goering replied:
“We’ll introduce koshatin and horsemeat into the diet of workers from the East.”

It's funny, but Bakke was not too lazy and counted - cats in Germany are not enough for such purposes, and horsemeat is already used by the Germans for food. I probably forgot to mention that the total use of cats for food threatens the Third Reich also with an invasion of rodents with all the ensuing consequences. Be that as it may, the arguments of Bakke were not heard, and the imported ostarbeiters were forced to eke out a half-starved existence. So, in December 1941, during a week, workers engaged in hard labor received 16,5 kg of turnip, 2,6 kg of ersatz bread, 3 kg of potato, 250 g of substandard meat (most often horse meat), 130 g of fat, 150 g of yeast, 70 g of sugar and a little more 2 liters of skim milk. Erzats bread was baked mainly from bran, sugar production wastes, as well as straw and leaves. In addition to the fact that this, of course, was not enough to replenish strength, such a diet also permanently disabled the digestive system. Although on paper everything was beautiful - 2500 calories per day. Worst of all, even this meager diet in the vast majority of cases did not reach either prisoners of war or ostarbeiters.

In the spring of 1942, something unprecedented happened - the Ministry of Food reduced food standards for the civilian population of Germany. This was an inevitable exit before the influx of foreign labor and a decrease in total food supplies in the Reich. Adam Ace in the book gives the results of research by German nutritionists - working burghers have stopped increasing body fat. And this was akin to the loss of a strategic resource base for warfare. In industries such as mining, the German leadership expected a drop in labor productivity as a result. It would seem that the situation should be corrected by the working hands of prisoners of war and ostarbeiters attracted from abroad. But they were dying of hunger, and it was possible to increase their allowance only at the expense of the native Germans. In turn, the Germans spoke out very unambiguously on this subject - SD everywhere recorded waves of dissatisfaction with both the decline in diet and the heyday of the black market. This situation has already been overcome once by the leadership of the Third Reich during the implementation of the T4 or Aktion Tiergartenstraße 4 program. Peaceful Germans then almost took to the streets when they learned that demented and inferior compatriots were secretly killed in hospitals. After that, T4 quickly turned around and focused on the “more acceptable” holocaust for the population. 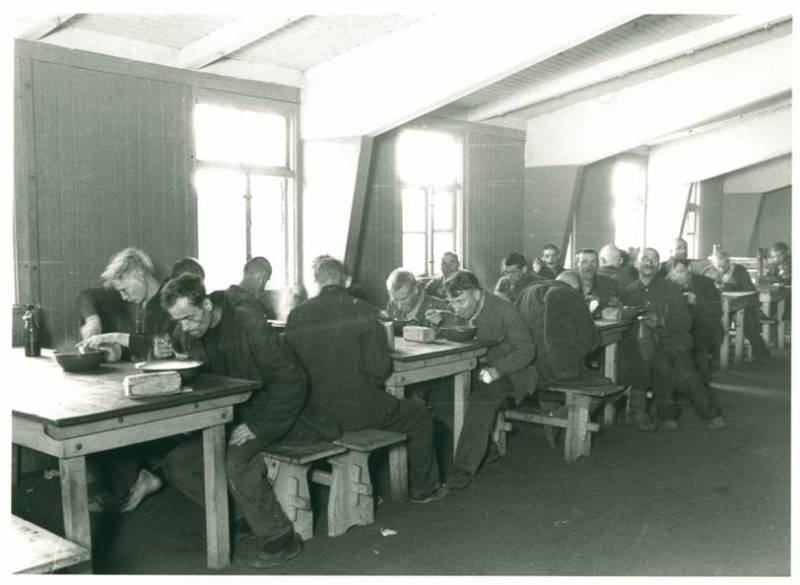 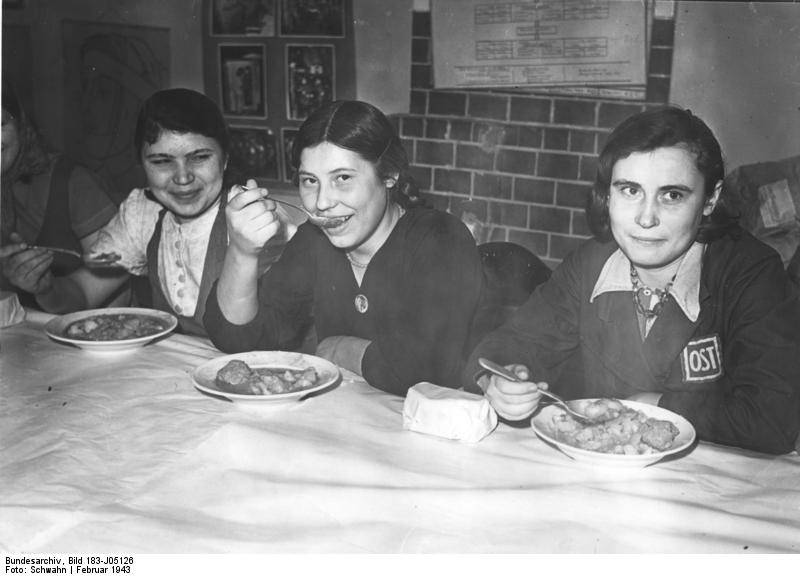 Propaganda photographs illustrating tolerable living conditions of migrant workers. In fairness, it is worth noting that by 1943, the nutritional standards of workers from the eastern territories really changed for the better

So in this situation, no one planned to redistribute food between the indigenous and the visitors. As a result, many military-industrial companies complained that they almost every day at the machine tools, Ukrainians fall into hungry fainting. At the same time, many found the strength to organize hunger riots and actions of insubordination. So, in Unterturkheim at the famous Daimler-Benz plant in mid-1942, the Ostarbeiters refused to go to work until they were improved in nutrition. The leaders of the plant sent the most important rebels to a concentration camp, but immediately wrote to the very top with a request to still increase the proportion of carbohydrates in the diet. Fritz Sauckel himself, authorized by the labor force in the Third Reich, lost his temper News. He completed his work on the import of slave power, but there was nothing to feed them. Rich and fertile Ukraine was ruled by the Germans, and in Germany workers (albeit ostarbeiters) died of starvation.
“I will find ways and opportunities to get grain and meat from Ukraine, even if I have to put all European Jews in a live conveyor belt in order to deliver boxes of food from Ukraine”
,
- he was afraid of his subordinates.

Sauckel did not manage to get enough food from Ukraine, nor to put Jews in the conveyor belt. Already in 1942, on the initiative of Herbert Bakke, the Wehrmacht was seriously cut off in food supplies, forcing them to independently seek food for themselves in the occupied lands. The consequences of this, we are well aware. The next victim was Poland, which until that time was receiving allowance from the Reich - all fertile lands were alienated in favor of Germany. Now, from the occupied country, they demanded the supply of grain and meat already to Germany, which caused the death of many hundreds of thousands of residents and, above all, Jews in the ghetto. Pumping out everything possible from its eastern neighbors, the Germans, like a mantra, repeated Goering's words:
“We’ll have to come to terms with all the consequences, because before the German population begins to starve, others will pay for it.”

The grievances within the original German territories were most feared by the Bonds of the Third Reich. And here, probably, we come to the main point of the whole fascist ideology - it finally brought tangible material benefits to the population. No matter how vile it may sound, if it were not for the targeted extermination of Jews and Slavs as potential consumers, German citizens already in the middle of the 1942 year felt an acute shortage of calories. And it is not known how all this would end in the end. And the Germans, meanwhile, were incredibly lucky - in the autumn of the 1942 of the year they harvested a good crop, brought in a lot of “imported” products and finally increased food standards. The fat layer of the burgher began to grow again ...