The origins of the mountain police

20 September 2019
18
Mountain police. The time of birth of the mountain police is almost impossible to determine, because throughout stories The accession of the Caucasus to Russia periodically appeared and disappeared irregular military formations allied to the Russian troops and completely falling under the characteristics of the mountain police. These were detachments of Ossetians and Kabardians, various militia units, formations of various Georgian princes, etc. In addition, do not forget the famous "team of hunters", often consisting of immigrants from the Caucasus, who left their native village for a variety of reasons. By the way, one of such "hunting" detachments was commanded by the great Russian poet Mikhail Lermontov. 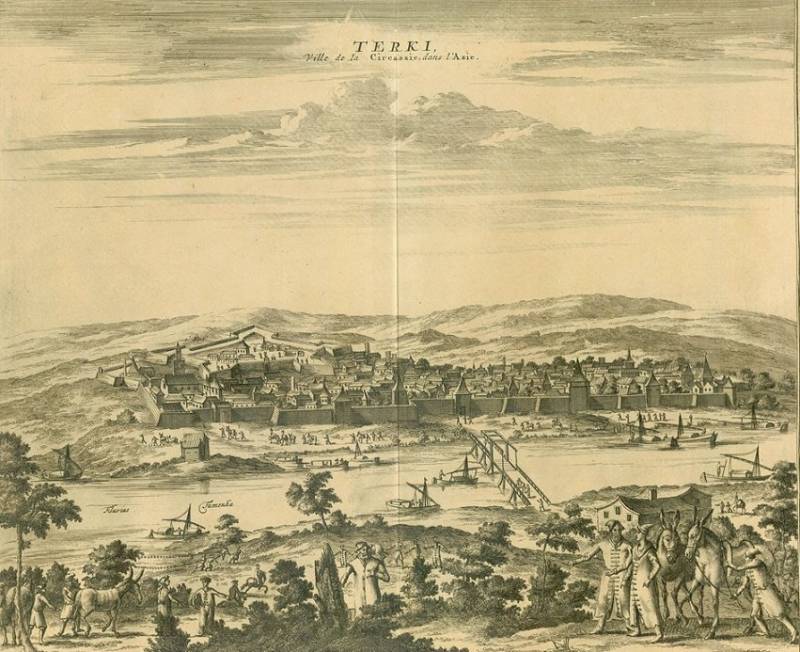 The approximate time for registration of military cooperation in the framework of interaction between the regular Russian army and irregular military units of the peoples of the Caucasus is the 16 century. It was in the 16 century that, by decree of Tsar Ivan the Terrible, who had entered into allied relations with the Kabardian and Circassian princes, not only service people were sent to the North Caucasus, but also Cossacks with their families, who later laid the foundation for the Terek Cossacks. In the 1567 year, the Terek prison was founded at the mouth of the Sunzha River. Later, this fortification, repeatedly transferred, will grow into a large fortified city of Terki.

The famous Ottoman traveler and historian Evliya ебelebi described the city of Terki as follows:
“This is the largest and most remote port on the border of Dagestan and the kingdom of Moscow. All Moscow merchants leave ships here and head for Dagestan, Georgia and Iran. ”

It was in this city with an extremely variegated ethnic composition that the first mountain units consisting of a variety of people appeared. There were runaway highlanders and seekers of military glory. Their number at first did not exceed a couple of hundred fighters. In addition, most often these units performed intelligence and diplomatic functions, as owned many languages ​​of the Caucasus. Also, these mountain formations were often used to restore law and order, because to solve the heated conflict between the Armenian and Kabardian merchants, the Russian Cossack or Sagittarius because of the language barriers was not possible. 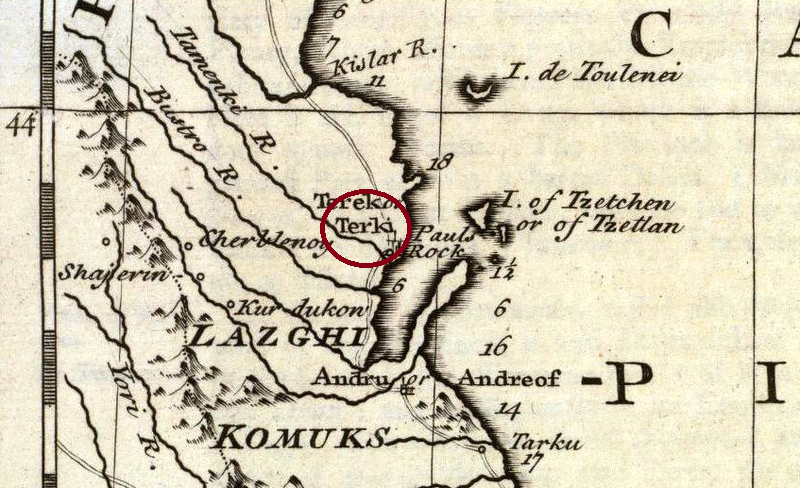 Graters on the map

Soon, the Terek city began to grow in all sorts of settlements, in which representatives of one or another ethnic group lived compactly. There appeared a Tatar settlement, Cherkasy and even Okotskaya, inhabited by Chechens-Akins. Law enforcement in these settlements was a prototype of the mountain police. Of particular note is the Newly Baptized settlement, in which the highlanders who converted to Orthodoxy lived. Later, the mountain inhabitants of this settlement often joined the Kizlyar Tersky army. 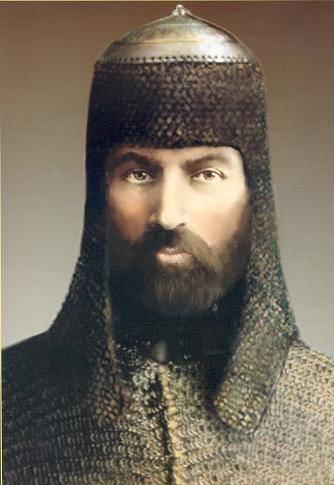 In addition, if there was a need to protect the city from the enemy, no matter who he was, each settlement put up an equestrian detachment, which was part of the combined irregular military formation, i.e. upon the fact of the mountain police. In the 1603 year, the command over this detachment was entrusted to Prince Sunchaly Kanklychevich Cherkassky from Kabarda, who in the same year, Tsar Boris Godunov allowed to settle in Terki. Until the end of his life, Sunchaly Cherkassky, like his cavalry, was faithful to Russia and bowed many Kabardian princes towards Moscow.

The thorny path of development

Further, the practice of involving local residents in law enforcement, reconnaissance, building diplomatic bridges and, finally, participating directly in hostilities began to expand. This was dictated by a number of factors. So, despite the low combat effectiveness of some mountain units, the very fact of their existence reduced the number of guns in the enemy camp. Also, the mountain police were a political aid, demonstrating the degree of trust to the local population, as well as contributing to the formation of state thinking among new subjects. Now they were not some kind of appendage to the earth, but citizens of the great kingdom, and later the empire.

However, the training and discipline of many mountain units, especially at the beginning of their formation, to put it mildly, left much to be desired. Many Russian military men were very skeptical and even contemptuous of such detachments; therefore, they did not rush to implement the decisions of the capital, as they considered political. The quality of human material also suffered. Caucasian fugitives were often expelled from their own village for crimes, someone robbed, someone was a blood thief or just a killer. However, the formation of the mountain police became an urgent need.

Soon, the document, according to which the Caucasian princes accepted citizenship of the Russian Empire, included a clause that provided for the mandatory formation of national irregular units to assist Russian troops. In the 1765 year in Mozdok, a mountain team was formed of two hundred highland fighters. And already in the 1786 year, Empress Catherine II ordered to create an army of mountain residents by recruiting with an appropriate salary for the service. As a result, several hundred horsemen were formed, both for local service and for overseas campaigns.

At the same time, detachments of the Ingush (300 fighters) and Ossetian (500 fighters) mountain police were formed to guard the Georgian Military Highway. Moreover, the Caucasian governorate was allowed, if necessary, to attract more fighters from the local population to the created Ossetian-Ingush police forces.

The capture of the Poti fortress of Fash-Kale became a special impulse to a serious perception of the mountain police. As you know, when trying to remove the siege from their fortress, the Ottomans landed a large landing in the Poti area. The mountain police of the Gurians, Megrelians and Abkhazians came to the aid of the Russian troops of General Orbeliani. Contrary to the established stereotype of low training and combat readiness of the mountain units, the Gurians, Abkhazians and Mingrelians distinguished themselves in the battle of Poti. It became clear that the mountain police, with competent motivation and personnel selection, could become a significant military force in the Caucasus, while it would be the military force of the Russian Empire.

In the 1810 year, the commandant of the Vladikavkaz fortress concluded an agreement with the Ingush population, according to which the Ingush pledged to oppose the hostile groups of Karabulaks, Chechens and others to invade Russian lands, rob the population and rob the caravans. Also, the Ingush were to call up to a thousand soldiers at the call of the Russian troops. They were supposed to keep for the campaign, as well as a share of the trophies.

Count Paskevich and his mountain police

In the 30-s of the 19-th century, the initiative to form the mountain units was already made personally by the governor in the Caucasus, Ivan Fedorovich Paskevich. It was under him that full-fledged police detachments were created, including the Caucasian Horse and Mountain Regiment. These units distinguished themselves in the Transcaucasian campaigns and during the Polish campaign. On 2 on June 1835, Emperor Nicholas I signed a decree on the formation of two regiments. One was to be composed of Muslims, Armenians and other residents of Transcaucasia, and was called Muslim, and the other of the Circassians, Kabardians, Chechens, Kumyks and other highlanders will be called the Caucasian-Mountain. 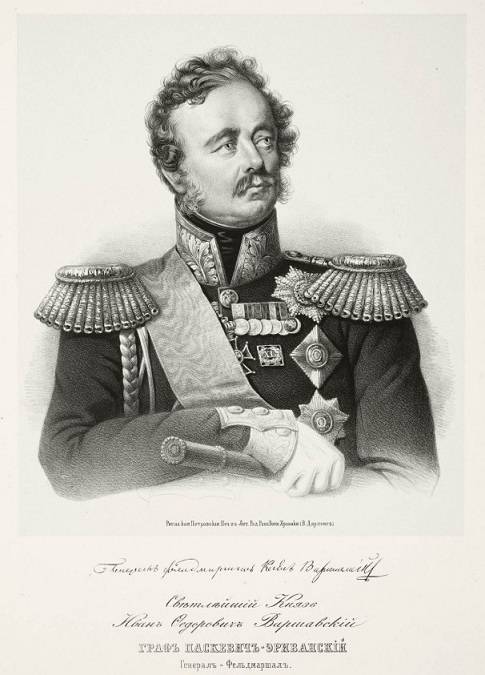 Paskevich believed in the idea of ​​forming full-fledged mountain units that at the same time in the 1835 year, while in the capital, he personally reported to the emperor about the need to equip the Life Guards of the Caucasus-Gorsky half squadron with people of the Caucasus-Gorsky regiment who had served for some time in the army . And also allow these warriors tested in battles the possibility of transferring a convoy to His Majesty's own. This will be a critical and consistent political step. 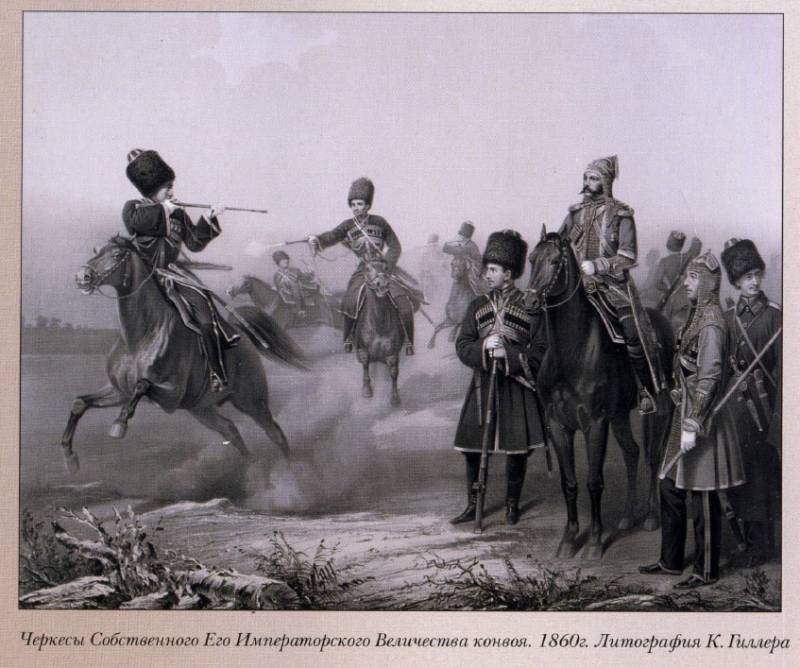 However, far from all attempts to integrate the Highlanders into the military system of the Russian Empire ended in positive results. For example, the very same Count Paskevich on 14 on February 1831 of the year 500, during the appointment of Daniel-bey as the ruler of the Ilisuy Sultanate, set the condition according to which the new ruler was obliged to put up horsemen for 3000 for military operations outside the borders of the khanate. Inside the khanate itself, from the raids, Daniel was obliged to form a mountain militia in XNUMX warriors. Soon the beck was granted the rank of captain.

But Danil-bek repaid betrayal for his trust. In the 1844 year, during the next round of the Caucasian war, namely at the peak of Shamil’s power, the ruler of the sultanate crossed over into the enemy’s camp. Daniel swore allegiance to Shamil. Thus, the units of the Ilisu militia, in fact, joined the rebel imam. True, at the first battle, the former ruler of the Sultanate and his police detachments were defeated. At the same time, the resourceful Daniil later managed to run back to the Russians again, even with the return of military ranks. 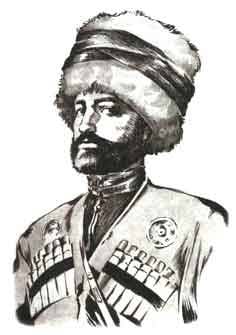 At the same time, the recruitment of the local population in the ranks of the mountain police continued to grow. This was facilitated by the small number of empire troops in the Caucasus, as well as the threat from Persia and the Ottoman Port. In addition, the latter factors served as a good incentive for the highlanders themselves, most of whom did not at all perceive the Persians and Turks for some fraternal peoples. For many residents of the Caucasus, both Turks and Persians were strangers, often demonstrating their arrogance.