18 September 2019
34
In 2013, the ground forces of South Korea received the first mass-produced K21 infantry fighting vehicles manufactured by Hanwha Defense Systems. Not so long ago, this BMP became the basis for a new model called AS21 Redback. This version of the tracked armored vehicle is intended for the Australian army and participates in the LAND 400 Phase 3 competition. Whether AS21 will be able to win the tender and enter the arsenal of Australia is not known.

Variant of the appearance of the AS21 Redback BMP

The Australian motorized infantry is still armed with American-made M113AS4 armored personnel carriers and local modernization. This technique is outdated morally and physically, and as a result requires replacement. The search for a suitable sample is carried out as part of the LAND 400 Phase 3 program - the next stage of the larger LAND 400.

Until recently, four contestants participated in the program. On 16 of September it became known that only two reached the “finals”. Over the next 12 months, they will have to build an experimental technique and put it to the test. Until the end of 2021, prototypes will be tested, after which the military and political leadership of Australia will draw conclusions and choose the most successful model.

Current plans include the purchase of 450 tracked infantry fighting vehicles with a total value of not more than 15 billion Australian dollars (about 10,3 billion US dollars). The production of equipment will be launched by the mid-twenties and should last several years.

According to the latest decision of the tender committee, only two imported models of equipment remain in the program. This is the German BMP Rheinmetall KF41 Lynx and the South Korean AS21 Redback from Hanwha Defense Systems. In future trials, they will have to fight for the contract.

The German company-participant submitted to the competition a finished model of armored vehicles. South Korean industry, in turn, offers the customer a project for deep modernization of a serial model, made taking into account its requirements.

The design is based on the design of the K21 infantry fighting vehicle, already used in the Korean army. The redesigned K21 received the designation AS21 and the menacing Redback name is the “Australian Widow” (local poisonous spider).

The AS21 project was first presented at the beginning of September last year at the Land Forces 2018 exhibition. Then he officially became a participant in the new contest. Since then, Hanwha Defense Systems has repeatedly published various data and images. Pi this full-fledged prototype is still missing. It will appear only in the coming months, as required by a new order of the Australian army.

AS21 preserves the architecture of the underlying machine. The use of a front-engine layout with a stern arrangement of the volume troop compartment is proposed. The type of reservation and its characteristics are not called. Mention is only made of its compliance with the modern requirements of ballistic and mine protection. Apparently, the body’s own armor is complemented by patch elements.

In the presented images of the armored car, there are two sets of smoke grenade launchers. Also on the tower are radars and launchers of an active protection complex like the Israeli Iron Fist. Thus, AS21 BMP receives comprehensive protection against various threats from all directions.

The mobility of the machine is ensured by an engine with a power of the order of 750 hp. In terms of driving performance and mobility, the AS21 and K21 should be similar.

At the request of the customer, the Redback infantry fighting vehicle is equipped with a double turret with a set of barrel and missile weapons, as well as fire control systems. The main weapons AS21 is an 30- or 40-mm automatic cannon with which a normal-caliber machine gun is paired. On the roof of the tower it is proposed to mount a remotely controlled combat module with an 12,7-mm machine gun, as well as an anti-tank missile launcher.

It is proposed the use of modern sighting systems and fire control systems that ensure the use of all types of weapons. Airborne communications systems integrate infantry fighting vehicles into the overall command and control structure.

The AS21 BMP's own crew consists of three people. The troop compartment holds eight seats for fighters. Boarding and disembarking should be carried out through the aft ramp with a spare door.

The estimated combat weight is 42 tons. The vehicle can accelerate to 65 km / h or more with a cruising range of 520 km. Due to the engine with the same power, other mobility parameters should be preserved. The base K21 is floating. Her version for Australia is likely to retain these qualities.

Thus, the AS21 Redback project retains the basic provisions and solutions of the base K21, but has the characteristic features associated with the technical progress of recent years and the wishes of the customer in the person of the Australian army. During the first presentation of the project, it was argued that the "Australian Widow" could become a platform for the construction of new infantry fighting vehicles and other equipment with one or another characteristic features required by different customers.

The other day, the Australian army chose the finalists of the LAND 400 Phase 3 program. They became BMP AS21 and KF41 development of different countries. Now their developers must present an experimental technique and ensure that it is tested, which takes exactly one year. Unlike German competitors, the South Korean company Hanwha Defense Systems still has not shown the finished prototype of its armored car, and it has to build it. However, the accumulated experience will allow us to cope with such a task in the required time.

A real comparison of the two armored vehicles will begin no earlier than next fall, and its results are extremely difficult to predict. Not all important information about the two infantry fighting vehicles is available, and the lack of information makes comparison difficult. In addition, the customer does not specify his position and does not indicate a possible favorite.

From the point of view of the general features of the design, architecture and composition of weapons, the two participants in the LAND 400 Phase 3 contest are as similar as possible. Moreover, they can be considered typical modern tracked infantry fighting vehicles designed to meet current requirements. The differences are only in individual technical solutions and the list of used units. The characteristics and capabilities are as close as possible.

Both offered machines can be the basis for other technology. The developers provide for various ways of rebuilding the BMP chassis with the installation of one or another weapon or equipment. So, the KF41 Lynx project is a representative of the family of transport armored vehicles. During the development of the K21 / AS21, South Korean engineers worked on the installation of various equipment, including large-caliber artillery systems. Of all this diversity, Australia so far wants only an infantry fighting vehicle. 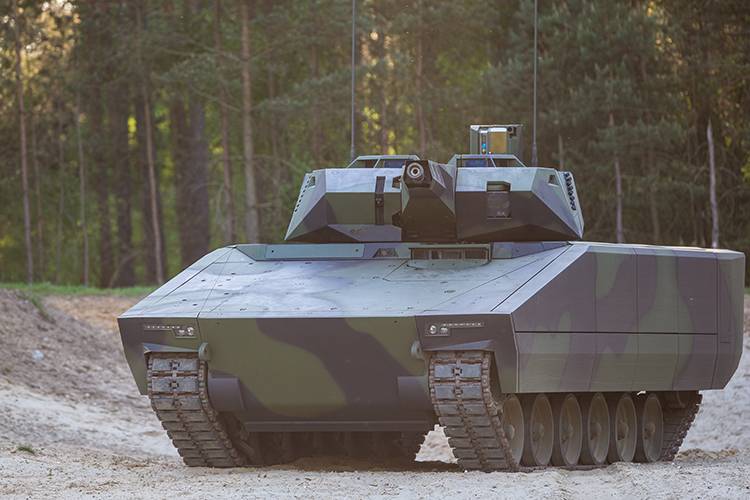 A hint at the serious potential of the Redback BMP may be the very fact of its release in the final part of the LAND 400 Phase 3 program. The armored vehicle has not yet been built in metal, but the potential customer has already preferred it over a number of existing models. Probably, the project was really able to interest the tender committee and even at the current stage surpasses competitors.

BMP of the future

A new project from Hanwha Defense Systems has a good chance of winning the LAND 400 Phase 3 competition, but it may also be inferior to German competitors. The future contract provides for the supply of 450 armored vehicles with a total value of more than 10 billion US dollars, and the competitors will have to do everything possible to get it.

It is noteworthy that Rheinmetall and Hanwha have “escape routes” in case of loss in the current competition. Infantry fighting vehicles KF41 Lynx and AS21 correspond to all modern ideas and may be interesting not only in Australia. For example, negotiations are underway with four potential foreign customers over the Lynx infantry fighting vehicle. Soon, the South Korean AS21 Redback can fully enter the international market. However, new orders can be much more modest than the desired Australian.

The next 12 months, German and South Korean industry will spend on the assembly of the required prototypes. Until 2021, these machines will be tested in Australia, and in 2022 the commission will determine the winner of the program. Contest results remain unclear and follow up the news.