12 September 2019
20
These days, in the framework of the Slavic Shield - 2019 exercises, a visit of Serbian air defense troops is taking place in Russia. As part of the growing level of cooperation and strengthening relations, guests were shown a number of modern air defense systems, including S-400 and a non-standard version of the S-300PM air defense system. 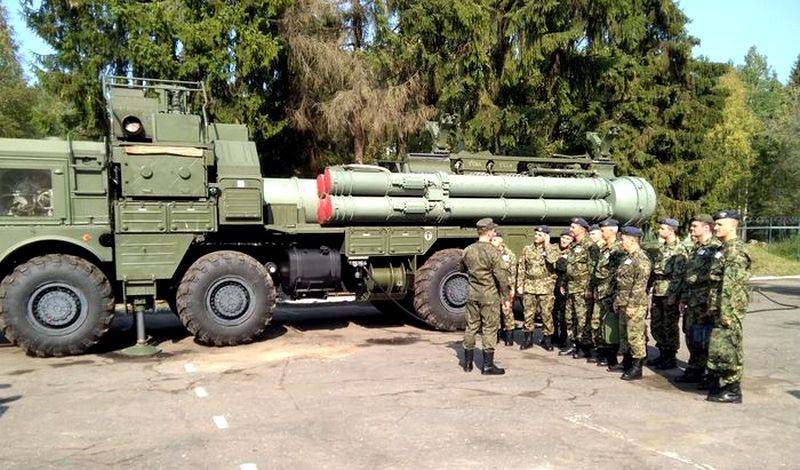 Visit of the Serbian delegation of air defense forces to the Ashuluk training ground as part of the Slavic Shield - 2019 exercises, September 2019. In the photo - 5P85 launchers with S-300ПМ air defense systems with combined SAM - 48Н6 and 9М96

Belgrade continues to strengthen ties with Moscow, which it sees as one of the guarantors of its own territorial integrity and independence. One of the signs of this strengthening of relations was the joint exercises of the Slavic Shield - 2019 air defense forces, the bulk of which should take place at the Ashuluk training ground.

Serbian soldiers listened to introductory lectures on S-400 air defense systems, got acquainted with history and the infrastructure of the Training Center of the anti-aircraft missile forces, and also passed the tests, which gave them access to live firing.

Among other things, in photographs of a visit by Serbian air defense fighters published by the newspaper "A red star", you can also see an unusual self-propelled launcher of the 5П85С type with the S-300ПМ air defense system with different SAMs - one 48Н6 TPK and a package of four TPKs with 9М96.

This combined control system with various anti-aircraft missiles has already been presented at the International Aviation and Space Salon MAKS-2019. The 48H6 missile is operated in special airtight containers. Thanks to them 48H6 does not require verification and adjustment during the entire period of operation.

48H6 provides the defeat of high-speed targets at a distance from 5 to 150 kilometers at altitudes from 100 meters to 27 kilometers. In addition, the anti-missile is capable of destroying tactical ballistic missiles at a distance of up to 40 km (though in this case they need target designation). The range of destruction of low-flying targets 28 - 38 km.

9M96E guided missiles, in turn, can hit targets at ranges from 1 to 40 and altitudes from 5 meters to 20 km. They are armed with the latest modifications of the S-300PM-2 air defense system, the S-400 complex, and the advanced air defense systems of the Air Force and Navy, developed on the basis of the aforementioned installations.

A special feature of 9М96Е is the “cold” vertical start. The launch of the rocket is carried out by preliminary ejection from the container to a height of the order of 30 meters before the main engine fires.

An inertial control system with an infrared seeker, which can be reprogrammed during the flight, is located in the head part of the rocket that has “lit up” at the installation site. The radio fuse controls the warhead of the rocket and uses all the information available on board the rocket to adapt to the meeting conditions with the aim of.