11 September 2019
55
The Ministry of Defense denied the information about the emergency landing of the MiG-31BM fighter-interceptor at the Bolshoye Savino airfield during a complex exercise. This was reported by the press service of the Central Military District. 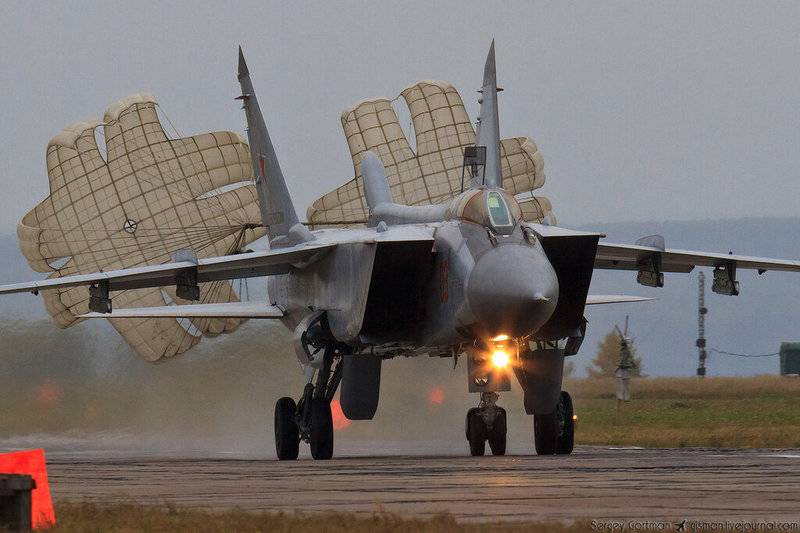 The Russian military department said that the information circulated by some media about the alleged emergency landing of the MiG-31BM fighter due to a fire occurred was not true. The plane crashed in normal mode, the detected malfunction was identified during the mandatory post-flight inspection of the aircraft and has already been fixed.

On September 10 on 2019 of the year, the MiG-31БМ aircraft, after carrying out a planned training flight, made a regular landing at the airfield in Perm. When conducting a mandatory after-flight inspection, a malfunction was detected, which is currently resolved
- it is spoken in the message of the Ministry of Defense.

It is added that at the present time both the aircraft itself and the crew are ready to carry out further tasks for their intended purpose.

Earlier, some media reported that on September 10 during the exercises on the integrated combat use of the supersonic MiG-31BM fighters and Su-34 fighter-bomber, the MiG-31BM fighter made an emergency landing on the Bolshoye Savino airfield in the Perm Territory. The cause was called a fire on board the aircraft.
Ctrl Enter
Noticed oshЫbku Highlight text and press. Ctrl + Enter
We are
Reports from the militia of New Russia for 27-28 September 2014 of the yearYuri Drozdov: Russia prepared the role of the sacrificial calf
55 comments
Information
Dear reader, to leave comments on the publication, you must to register.