Japanese spacecraft could not start due to fire

11 September 2019
22
The Japanese cargo spacecraft HTV-2 Kounotori 8 was unable to launch to the ISS due to a fire at the launch pad. About this on its website the National Office for the Exploration of the United States (NASA). 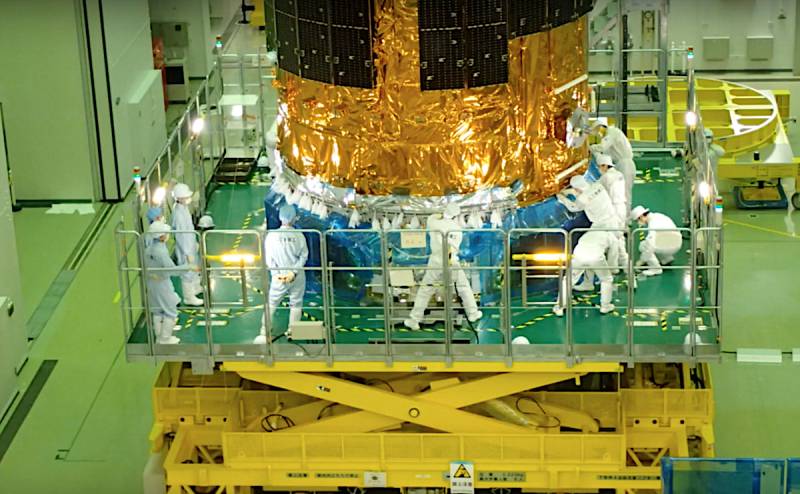 The HTV-2 Kounotori 8 cargo spacecraft, created by the Japan Aerospace Research Agency JAXA, was forced to stay on the ground instead of flying to the International Space Station due to a fire at the launch pad. HTV-2 was supposed to fly to the ISS today in 00: 33 from the launch pad located in the space center on Tanegashima Island. To launch, the H-2IIB booster was to be used.

The ship was supposed to deliver about 4 tons of cargo, including food, to the International Space Station crew. Also on the list were ISS solar panels, and the equipment needed to conduct dozens of scientific experiments.

The H-II Transfer Vehicle (HTV), also known as Kounotori, is a Japanese contribution to the fleet of unmanned spacecraft delivering cargo to the International Space Station. Along with the Russian "Progress", the American Dragon and Cygnus and the European ATV, he replenishes the station's supplies. The Kounotori 8 mission (HTV-8) should be the penultimate flight of the HTV, which should be replaced by the advanced HTV-X spacecraft in the early 2020's.

The first vehicle of this HTV-1 series, launched on 11 on September 2009, spent six weeks on the ISS before completing its mission on November 1 that same year. In turn, for the carrier of the H-IIB rocket, this flight is the first. This is also the first use of the second pad of the Yoshinobu launch pad.

Produced by Mitsubishi Electric, the HTV is about ten meters long and 4,4 meters in diameter. It has a mass of up to 16 500 kg, and can carry up to 1 900 kg of leaking cargo. HTV is designed for five days of free flight, with the possibility of a seven-day backup stay in orbit in case of problems during the docking.

The main thrust for the spacecraft is the 4 engine of the IHI Corporation HBT-5. In addition, the ship has twenty-eight jet shunting engines. Solar panels on the outer surface of the spacecraft are designed to generate energy for its systems. Kounotori is designed to carry both airtight and leaky cargo in two different compartments.

An important cargo of this mission is lithium-ion batteries for solar panels, which will replace the original nickel-hydrogen blocks that have been operating since the launch of the ISS. According to the plan, the old modules will subsequently be loaded onto the “truck” and burn with it in the atmosphere.

A new launch date is currently reserved. The ship will go to the ISS during the period from 12 to 31 of September.
Ctrl Enter
Noticed oshЫbku Highlight text and press. Ctrl + Enter
We are
The head of Roscosmos: Russia will build its orbital station after the ISSFailures of "Roscosmos" in the assessment of NASA
22 comments
Information
Dear reader, to leave comments on the publication, you must to register.