How the Poles served the Third Reich

11 September 2019
102
For a long time, historians spoke only about the service of the Poles in the armies that fought against Nazi Germany, including Polish formations on the territory of the USSR. This was largely due to the creation of socialist Poland (when it was secretly decided to forget about the sins of pre-war Poland) and historical concept, from which it followed that the Poles were exclusively victims of Nazi Germany. In fact, hundreds of thousands of Poles fought in the Wehrmacht, the SS and the police on the side of the Third Reich. 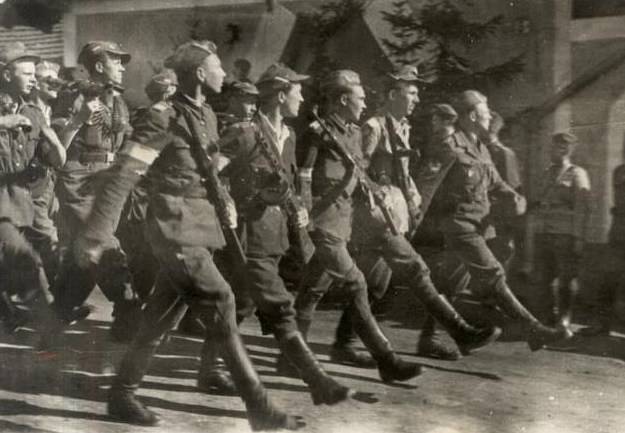 The soldiers of Свwiętokrzyskie brigade at the parade. 1945

Poles in the Wehrmacht and the SS

For the leadership of the Third Reich, the Poles were historical enemies. However, firstly, the Nazis tried to colonize Poland, and for this the principle of "divide and conquer" was used. The Germans distinguished various Slavic ethnic groups that have not yet become part of the Polish nation. In particular, Kashubov - in Pomerania, Mazury - in Prussia, Silesians - in Western Poland (Silesia), Gurals (highlanders) - in the Polish Tatras. Polish protestants also stood out. These ethnic groups, related to the Poles, and Protestants, were considered as privileged groups related to the Germans. Many Silesians or Kashubians saw in the loyalty of the German administration the possibility of a national revival, which was not during the Great Poland policy of 1919-1939.

Secondly, in the war on the Eastern Front, where losses were constantly growing, Berlin needed human resources. Therefore, the Nazis turned a blind eye to the service of the Poles in the Wehrmacht (as well as the Jews). At the same time, part of the Poles enlisted in the army as Germans. In the autumn of 1939, a census was conducted where people had to determine their nationality, many called themselves Germans to avoid repression. And those who called themselves Germans fell under the law of universal conscription.

As a result, the Poles served everywhere: on the Western and Eastern fronts, in Africa near Rommel and in the occupation forces in Greece. The Slavs were considered good soldiers, disciplined and brave. Usually these were ordinary workers and peasants, good “material” for the infantry. Thousands of Silesians were awarded the Iron Crosses, several hundreds received the Knight's Crosses - the highest German military award. However, the Slavs were not promoted to non-commissioned officers and officers, did not trust them, they were afraid of their transfer to Polish units, who fought for the USSR and for Western democracies. The Germans did not begin to create separate Silesian or Pomeranian units. Also, the Poles did not serve in the tank forces, the Air Force, on navyspecial services. This was largely due to lack of knowledge of the German language. There was no time to teach their language. Taught only the most basic expressions and commands. They even allowed to speak Polish.

The exact data on the number of Polish citizens worn by German uniforms is unknown. The Germans counted only the Poles, who were called up before the autumn of 1943. Then, from the Polish upper Upper Silesia and Pomerania joined to the Third Reich, they took 200 thousand soldiers. However, recruitment to the Wehrmacht continued further, and on an even wider scale. As a result, until the end of 1944, up to 450, thousands of citizens of pre-war Poland were called up to the Wehrmacht. According to Professor Ryszard Kaczmarek, director of the Institute of History of the University of Silesia, author of the book “Poles in the Wehrmacht”, about half a million Poles from Upper Silesia and Pomerania passed through the German armed forces. The remaining Poles, who lived on the territory of the governor general, were not drafted into the armed forces of the Third Reich. Killed, when compared with the losses of the Wehrmacht, up to 250 thousand Poles. It is also known that the Red Army captured, according to incomplete data, over 60 thousand troops of the Wehrmacht of Polish nationality; Western allies captured more than 68 thousand Poles; about 89 thousand people joined the army of Anders (some deserted, some fell from prisoner of war camps).

At the final stage of the war, the so-called ентwiętokrzysk Brigade or “Holy Cross Brigade”, formed from Polish Nazis holding radical anti-communist and anti-Semitic views and taking part in the genocide of Jews, was accepted into the SS forces. Her commander was Colonel Anthony Shatsky. The ентwiętokrzyskie brigade, created in the summer of 1944 (over 800 fighters), fought against pro-communist military units in Poland (Ludov’s army), Soviet partisans. In January 1945, the brigade entered into hostilities with the Soviet troops, became part of the German forces. From its structure formed subversive groups for operations in the rear of the Red Army.

Together with the Germans, the Holy Cross brigade retreated from Poland to the territory of the protectorate of Bohemia and Moravia (occupied Czechoslovakia). There, her soldiers and officers received the status of SS volunteers, were partially dressed in SS uniforms, but with Polish insignia. The composition of the brigade was replenished at the expense of Polish refugees and grew to 4 thousand people. In April, he sent the brigade to the front, its task included protecting the rear in the frontline, fighting the Czech partisans and Soviet intelligence groups. In early May 1945, the Polish SS men retreated west to meet the advancing Americans. Along the way, in order to alleviate their fate, they liberated part of the Flossenbürg concentration camp in Golisov. The Americans accepted the Polish SS men, entrusted them with the protection of German prisoners of war, and then allowed them to take refuge in the American occupation zone. In post-war Poland, members of the Holy Cross brigade were convicted in absentia. 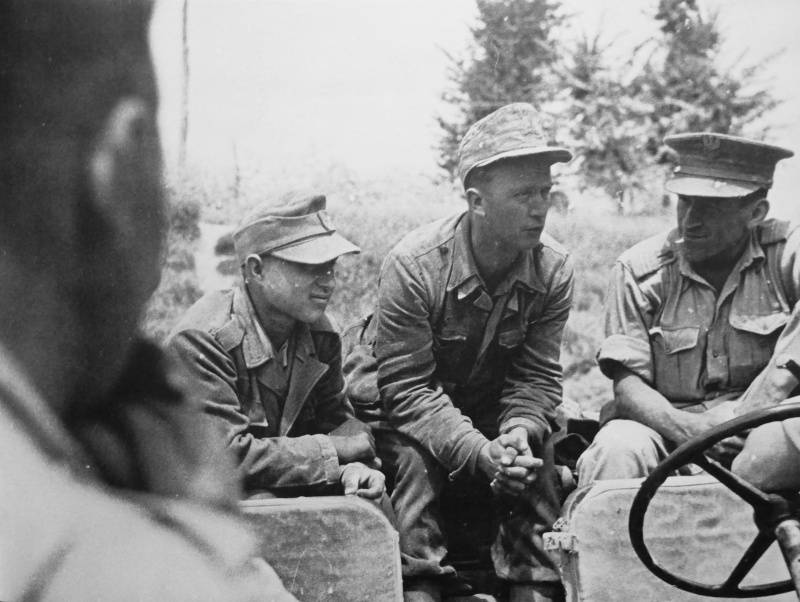 Poles from the Wehrmacht unit captured in the Monte Cassino area. They were drafted into the German army in Silesia and sent to serve in Italy. 1944

In the fall of 1939, the Germans set about forming the Polish auxiliary police - the Polish Police of the Governor-General (Polnische Polizei im Generalgouvernement). In her ranks were former police officers of the Polish Republic. By February 1940, the Polish police totaled 8,7 thousand people, in 1943 g. - 16 thousand people. By the color of the uniform, it was called "blue police." She dealt with criminal offenses and smuggling. The Polish police also involved the Germans in the security, guard and patrol services, participated in the arrests, deportations of Jews, and the protection of Jewish ghettos. After the war, 2 thousand former “blue” police officers were recognized as war criminals, about 600 people were sentenced to death. 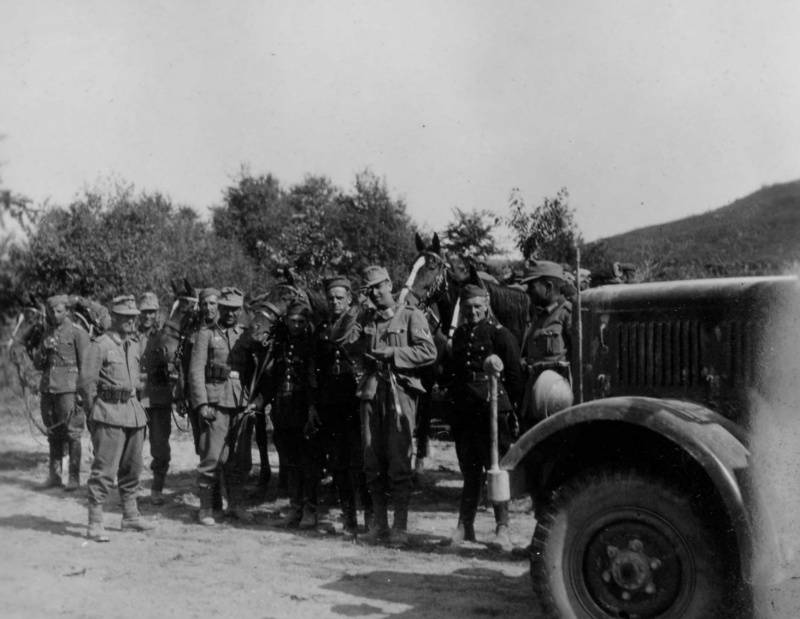 Polish police of the Governor General of the Third Reich. 1941

Citizens of the former Polish Republic also served in the Jewish police. After the occupation, the entire Jewish population of Poland was forcibly concentrated in special and protected areas - the ghetto. These areas had internal self-government and their own law enforcement services (Judischer Ordnungsdienst). The ghetto police recruited former employees of the Polish police, soldiers and officers of the Polish army, Jews by nationality. Jewish police maintained order within the ghetto, took part in raids, escorted during the resettlement and deportation of Jews, ensured the execution of orders of the German authorities, etc. The ordinary policemen did not have firearms, only batons, officers were armed with pistols. There were about 2500 police officers in the largest Warsaw ghetto, 1200 in the Lodz ghetto, and 150 in Krakow.

During the arrests, raids, deportations, etc., the Jewish police purposefully and strictly followed the instructions of the Germans. Some collaborators were sentenced to death and killed by Jewish Resistance fighters. A small part of the police, from the rank and file, tried to help the exterminated tribesmen. With the destruction of the ghetto, the Nazis eliminated the Jewish police, most of its members were killed. After the war, Israeli special services sought out and brought to justice the surviving members of the Jewish police and other traitors.

After the end of World War II, Poland became part of the socialist camp. Therefore, it was decided not to stir up the dark past of Poland and its citizens. The historical theory was accepted that the Poles were exclusively victims of Nazi Germany. This view prevails in modern Poland. The Polish soldiers of the Wehrmacht and other units of the Third Reich themselves tried not to remember the shameful service. The participants in the war wrote memoirs of service in the army of Anders, the 1-th Polish army as part of the Red Army (1-th army of the Polish Army), in partisan units. They tried not to talk about service in the Wehrmacht. Those who were captured in the West after the war and returned to their homeland underwent rehabilitation. Usually there were no problems with this. These were ordinary hard workers, miners, peasants, people far from politics and ashamed of the countless crimes that the Nazis committed. 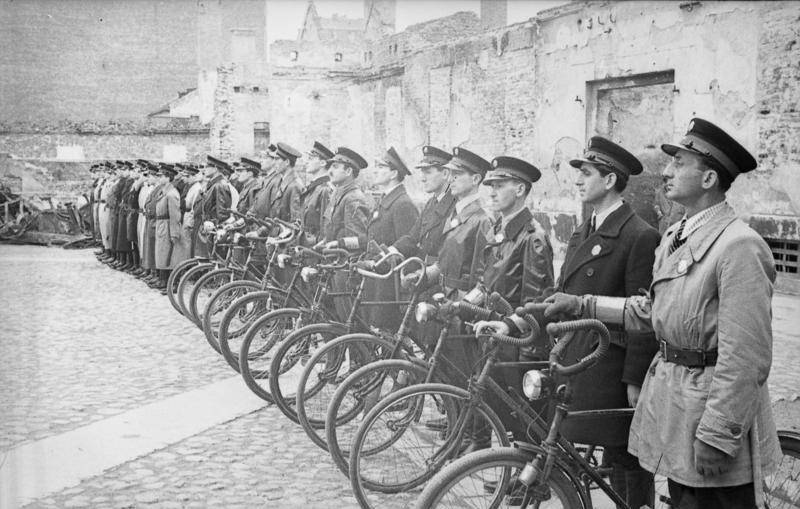 Ctrl Enter
Noticed oshЫbku Highlight text and press. Ctrl + Enter
We are
Myths of the Great Patriotic. Papier mache helmetFather told
102 comments
Information
Dear reader, to leave comments on the publication, you must to register.