The offspring of capitalism. American culture conquers the world

11 September 2019
197
One of the most dangerous types of American expansion is not military or even economic, but cultural. Modern mass culture is based on the American "core" and gradually covers the whole world, destroying national cultures or leveling them to the role of a folk appendage to some universal westernized culture. 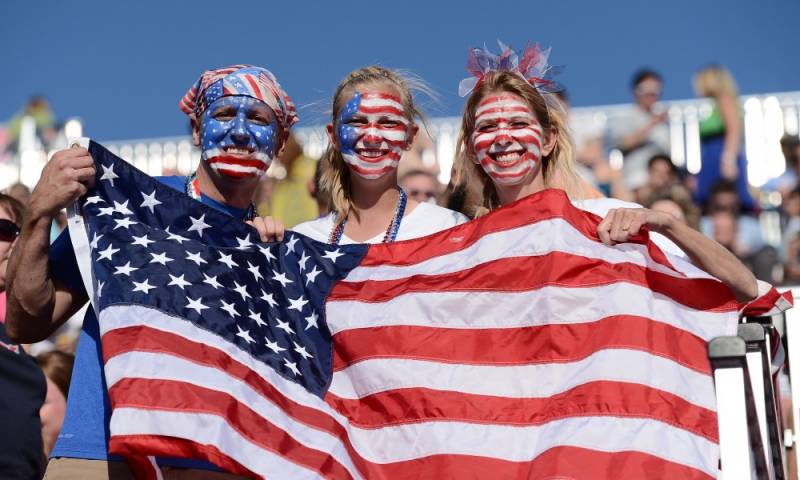 What is the basis of American culture?

Unlike European cultures, which have been formed over the centuries on the basis of both ancient culture (Greek and Roman), and Christian cultural traditions, medieval knighthood, American culture is entirely the product of capitalism.

There were cultures of Ancient Greece and Ancient Rome, Ancient China and Ancient Vietnam, Ancient Russia, reflecting various stages in stories and social development of the countries of the Old World. With American culture, everything turned out differently. Since American society was already forming as capitalist and did not know any other relations, American culture is a completely capitalist culture, devoid of foundation and based on the most important value - the desire for money, big money.

Capitalism is the "salt" of the American national idea. No matter how American politicians and public figures claim that the main value of American society is human rights, freedom of choice, democracy, in fact, its main value is money and only money. All other slogans, ideas, projects and projects are just an instrument for obtaining and saving money, ensuring financial domination and economic dominance.

However, military and economic methods alone cannot dominate the world. And this was perfectly understood by the true owners of America - the financial and industrial elites. It is they, and not the American political leadership, that are the main organizers and beneficiaries of American cultural expansion.

In order to ensure a stable view of the United States as the most advanced country in the world, which deservedly dominates in almost all areas, throughout the twentieth century, American popular culture spread, literally planted in other countries. And along with this culture the notorious American values ​​were planted, which in the new cultural environment had a disorganizing, corrupting effect.

Sociologists, speaking about the cultural modernization of the Third World countries, often pay attention to the fact that in countries that went along the path of blind copying of the American model, local societies decomposed quite quickly, prostitution, drug addiction spread, and young people gravitated to "easy" money and to all methods of obtaining them. The irrepressible cult of consumption is the main component accompanying the planting of American culture.

Cinema is the main weapon of American culture

Since literature and visual arts in the USA were always inferior to European, the dominance of American culture was ensured by cinema. Dealers in the American film industry quickly realized that cinema allows not only to make very big money, but also to impose an American way of life in other countries. Especially if it is bright, spectacular, albeit shallow in content cinema. It is these paintings that are quickly gaining wild popularity among young people and the “base layer” of any society.

In fact, American films do not have the depth that we see in Soviet and Russian, in Italian cinema. But American cinema has always amazed us with spectacle, spectacular movie actors, which overlapped with the simplicity of the storyline. American films are produced in such a way that people with the lowest level of intellectual development can understand them. This, in many respects, ensured the success of American films in export. 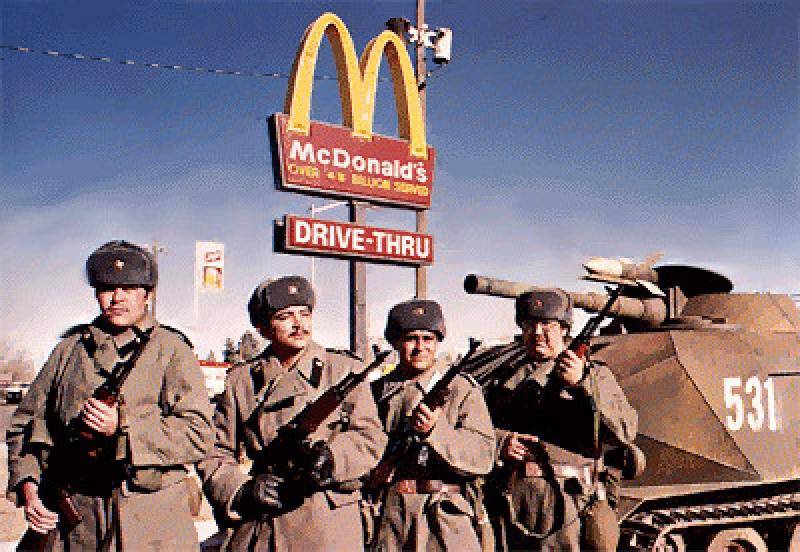 Primary meaning as ideological weapon The United States acquired cinema in the second half of the 20th century - during the Cold War, becoming one of the main means of planting American values ​​in the countries of the Third World and the socialist camp. We can say that American cinema made a certain contribution to the decomposition of the late Soviet and post-Soviet Russian society at the turn of the 1980's - 1990's.

Through watching American films, Soviet people became familiar with American culture and values, and adopted patterns of behavior that were alien to Soviet society and Russian culture. Needless to say, American cinema of the second half of the twentieth century was thoroughly permeated with hatred for the Soviet Union, the socialist system? In fact, these were purely propaganda paintings that found their audience in the USSR and other countries of the socialist camp and made a very big contribution to the formation and spread of anti-Soviet and anti-communist sentiments, especially among young people.

Only for several years at the beginning of the 1990's. American cinema made some adjustments to the image of Russia, paying tribute to the briefly improved Russian-American relations. More precisely, in these years the American leadership still had hope for the complete leveling of Russian political power. Russia was represented as one of the junior partners of the United States, along with other countries of Eastern Europe.

For example, in the film “Red Heat” (1988), a Soviet policeman arrives in the United States to fight the Russian mafia together with his American colleagues. Many are familiar with the legendary Police Academy: Mission in Moscow, in which American law enforcement officers come to Russia to exchange experiences, and various funny stories happen to them. These films were designed to slightly change the perception of Russians by the American audience in favor of the changes taking place in the political relations between the countries. 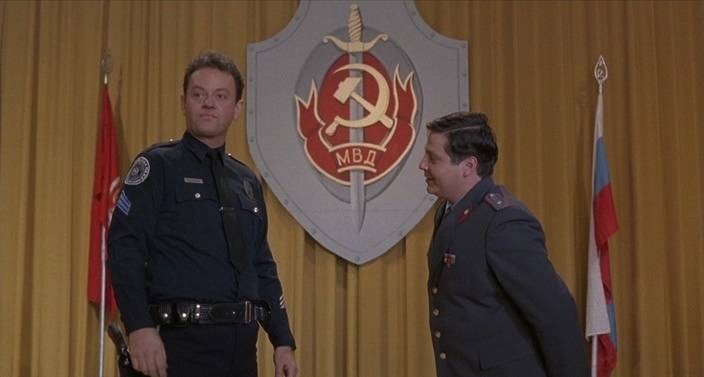 In the 1990s, the place of the main enemy of the United States was taken by some abstract terrorists, international organized crime, the drug mafia, whose representatives personified “world evil” in American films of that time. But already in the second half of the 1990's, the situation began to change, and from the beginning of the 2000's. Russia has once again taken the usual place of the “evil empire” in American popular culture, including in cinema.

The "alternative" political forces simply do not have the resource capabilities that the United States possesses. For example, many complain about “censorship” in Russian social networks, but Mark Zuckerberg’s Facebook also uses very strict censorship for any information that does not like the founders and leaders of this large social network.

But it’s not even political censorship. Through Internet technology, American big business is even more successful than before with the help of cinema, it is planting consumer values, while making money on the audience.

During the “Arab Spring” of 2011, social networks became an excellent tool for consolidating protest-minded youth. Subsequently, exactly the same technologies were used in Ukraine during the Euromaidan, now they are used in Russia. And the generation nurtured on American cultural patterns willingly follows those who set the mood today in the Internet space, in social networks. 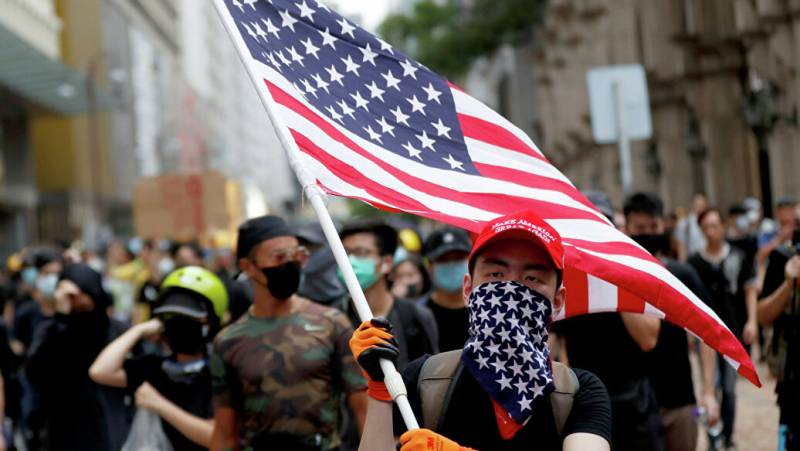 At the same time, people's consciousness is changing - clip thinking, the preference for virtual connections over real ones, the assimilation of values ​​and behaviors transmitted through social networks - all these factors form a new type of person - a consumer, so beneficial to American capital. Such a person thinks much less, he is much more manageable than a person brought up in traditional culture, absorbing information from books and communication with other people.

Cultural dominance is a new colonization

Spanish journalist Antonio Lorca Siero writes that we are talking about new forms of colonization - and not political or economic, but cultural. It is difficult to disagree with him, since most modern countries have culturally turned into American colonies. Even if the ruling elites of these countries try to emphasize their independence, take some kind of anti-American action, proclaim anti-imperialist slogans, in reality they have already lost. Moreover, they lost the war for the minds - the most serious and most dangerous war of our time.

No talented physicists, no brilliant commanders and fearless commandos and scouts will not change the situation, while the very values ​​of modern mankind, patterns of behavior for young generations will be set by the United States. You can try to compete with the United States by launching various national propaganda projects, but at the global level, all these efforts of individual states are in vain.

But what alternative can be opposed to American cultural expansion? Religious conservatism and traditionalism? Most of the socially active and educated population of the world will not go for a “religious renaissance” - the world has changed and these values ​​are more perceived as a relic of the past, a sign of sociocultural backwardness, which, as a rule, is closely connected with the economic backwardness.

Religious slogans can still mobilize some of the poor youth in Asian and African countries, and even then, if they are supported by the money of the Persian Gulf oil monarchies and funds controlled by them. In the Christian world there is not even that - the Western churches have long lost the battle for the minds of people, with the Eastern churches everything is only slightly better.

Contrasting American culture and the archaic of the East, they try to show us that there is no other alternative. Like, there is either the West, personified by the United States and based on capitalist values, or even less attractive backward countries of Africa and Asia with their religious fanaticism, inhumanity, hatred of Europeans (and whites) as such.

By confronting us with this choice, we are deliberately deprived of a third path that would reject both Westernized Western culture and Eastern archaic. And the fact that both the Russian authorities and the authorities of other countries trying to oppose the United States follow the same path in the wake of Western capitalist values, is the victory of American culture and the great misfortune of modern mankind.