10 September 2019
41
The cynical falsification of the beginning and course of the Second World War by our former Western allies suggests that they want to oblivion the real history and come up with a fake one to justify its anti-Russian policy and break Russia for the sake of the American "new order". As the analyst Lindon LaRouche warns us, about which Zbigniew Brzezinski clicked. In the article "Unlearned lessons of the Second World War" we tried to give, in our opinion, a real background to the course of world events, and now we can draw uncomfortable conclusions. 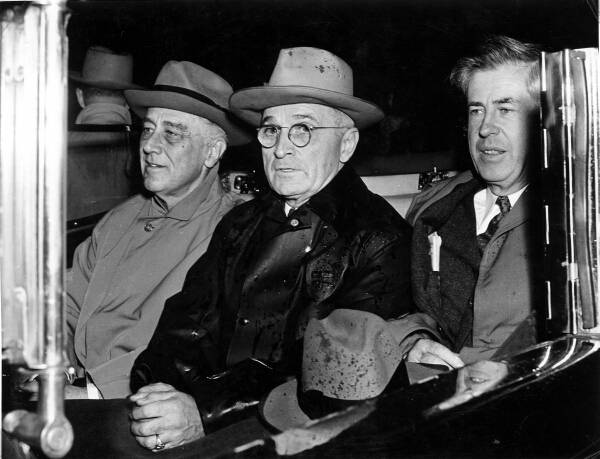 The West is the West

The American senator and future US president Harry Truman on the 24 of June 1941 of the New York Times either guessed or foresaw the future policies of the USA and allied England in the world war: “If we see that Germany wins the war, we should help Russia if Russia, we should help Germany, and let them kill each other as much as possible. ” He formulated or issued then in an emotional impulse the unchanging credo of American foreign policy.

And today, the United States maintains and deepens the postulate of President Harry Truman in foreign affairs: they create conditions for US opponents or competitors to weaken and kill each other as much as possible. To this end, the United States always helps the weakest to fight, so to speak, for minority rights. Here you need to look for the keys to America’s future actions on the world stage.

The Anglo-Polish military treaty of 25 on August 1939 of the year, ending with the English betrayal of the allied Poland on 3 of September 1939 of the year in the “fake” war with Germany, says that all treaties with England and its successor in the world arena, the USA, are not worth the paper on which they are written. For America, the whole world is the new Indians who can and should be deceived over and over again. Therefore, Russia unsuccessfully seeks to conclude equal treaties with the United States, insisting on the fundamentally impossible for America.

If the United States and conclude a truly equal treaty with Russia, for example, instead of START-3, then only to break it at a convenient time, as England did with Poland. By the way, Hitler also concluded an equal non-aggression pact with the USSR. It is much easier for Russia to agree on equal relations with China and other non-Western countries, therefore Russia goes and will go further to the East, starting from discrimination in relations with the West. In the foreseeable future, Russia is unlikely to succeed in becoming an equal party in relations with the United States and England.

Britain’s exit from the EU, the so-called Brexit, has a strategic goal of rapprochement with America. President Trump promises London a very lucrative bargain, followed by military-political bargains, which worries Berlin and Paris. After that, speaking bluntly, the United States and England can try to unleash a war in Europe in the spirit of the postulate of Harry Truman. To unleash a conflict in Europe, the United States is enough to provoke one of its notorious vassals, the first candidates for provocateurs are, of course, Poland and Bandera Ukraine, it is time to distinguish it from the former Soviet Ukraine.

Ukraine as a “Europe”

The US anti-Russian geopolitical course will remain an obstacle to the establishment of peace in Ukraine and the implementation of the Minsk agreements: Washington will continue to encourage revanchist sentiments of Ukrainian nationalists in the Crimea and Donbass. For the USA, the “new Ukrainians” are new Poles whom it would be good to throw under the feet of Russia, just as England threw the Poles in 1939 under the feet of Nazi Germany. However, Ukrainians will never become completely Poles for Anglo-Americans, because for them Ukrainians are still semi-Russian, therefore their attitude towards them will be worse than towards Poles.

Following the model of British military guarantees to Poland in the 1939 year, the United States together with England can conclude separate military agreements with Poland and Bandera Ukraine in order to push them into provocations to the glory of Anglo-American civilization. By creating a sense of false security.

The implementation of the political part of the Minsk agreements is possible only in the event of the failure of American politics and diplomacy in Ukraine, which is unlikely in the foreseeable future. For this, Russia needs to create such threats to US interests in the world so that they completely forget where Ukraine is located. Although with the help of China, Russia may try to do this. In the 1939 year, there was such a precedent, Churchill said about it: “The fact that such an agreement (German-Soviet non-aggression treaty. - Auth.) Was possible, marks the whole depth of the failure of English and French politics and diplomacy in a few years.”

Thanks to the arrival of Donald Trump in the White House of Washington, more precisely, due to the confusion caused by his arrival in the US oligarchic elites, a pause arose in America’s foreign policy, and Russia and the world received a respite. However, how long will it last? President Trump broke the elite consensus in the United States, but, unlike President John F. Kennedy, he was not killed for this and was not even removed from power. How serious is all this, what will be the consequences of Trump’s presidency for the world, if any? The most difficult question today.

Trump’s arrival in America put a similar question on the agenda in Europe: will there be a political figure of the same weight who will try to unite Europe with “iron and blood” in return for the Brussels gay Euro-association? French President Macron and ex-chairman of the EC, but Berlin's protege Jean-Claude Juncker made statements in this sense, but really nothing, as they say, portends. Although theoretically, the emergence of "European Trump" is possible.

It should be noted here that at the end of World War II, already before the obvious defeat of fascist Germany, the USA and England wanted to historically finish Germany off with the Morgenthau plan. US Treasury Secretary Henry Morgenthau proposed a plan to deprive Germany of industry and turn it into an “agricultural country,” which Europe is doing now in Europe. It seems that only the beginning of the “cold war” between the USA and the USSR prevented Morgenthau’s Anglo-American plan, and the opposite Marshall plan was adopted for Europe: a new confrontation in Europe required the consolidation of Western European countries and turning them into a showcase of US achievements.

Berlin, apparently, remembers the historical plan of Morgenthau and is afraid of new Anglo-American plans, is afraid that German industry wants to finish off with liquefied American gas and still turn Germany into an "agricultural superpower." Therefore, Berlin is so stubbornly building gas "northern streams" with Moscow, despite the rattling of the US sanctions.

The Second World War also showed that achieving collective security in Europe is a mirage, as long as there is England, and today there is also the USA. It follows that all American guarantees to the NATO bloc are fiction, the USA and Brexit England, sailing farther and farther away from Europe, will easily throw all of NATO, just as England easily threw Poland under the fascist ice rink 1 on September 1939 of the year.

Remember Harry Truman's postulate: "... and let them kill each other as much as possible."