Important differences between the smart claddings of the Su-57 and F-35A. What were the Indian experts pierced by?

9 September 2019
79
While short-sighted senior military officials from the Indian defense department continue to sing the pathos of the impending finalization of the absurd contract for the purchase of 36 multi-functional Rafale fighters worth about 7,87 billion dollars (218 million dollars per unit), reporters of the eminent military analytical bharat -rakshak.com decided to go into all the harsh search of arguments in favor of the exit of the aircraft manufacturer Hindustan Aeronautics Limited from the FGFA program on 21 April 2019, which provided for joint I’m developing with the company Sukhoi the Indian version of the 5 fighter of the Su-57 generation. 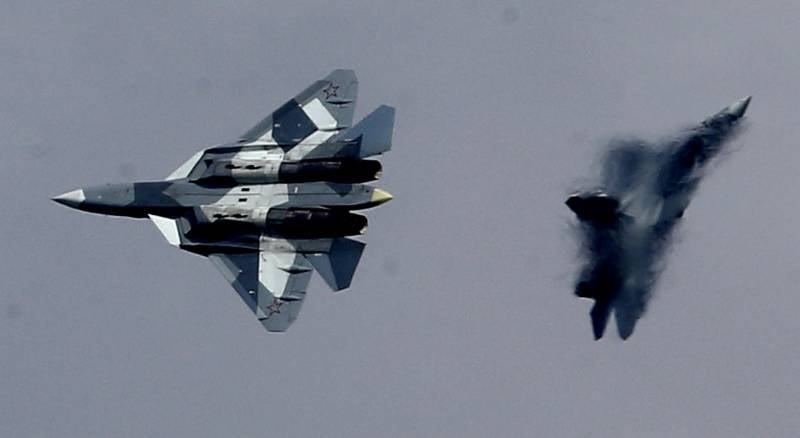 As a key justification for the incident, Bharat Rakshak employees, referring to informed military and diplomatic sources in the Indian Air Force and HAL headquarters, presented the fact that the Indian side allegedly “was not able to participate in the FGFA program as the main contractor since November 2004 of the year, since it was during this period that the Sukhoi Design Bureau specialists completed work on a preliminary outline sketch of the promising multi-role T-50 PAK FA fighter. ” Meanwhile, this “opus” alone eloquently illustrated the deceit and opportunism of the “couch experts” of “Baharat” and representatives of the Indian Air Force.

The fact is that the implementation of the preliminary preliminary design of the T-50 fighter by the middle of the 2000's. it only marked the formation of the general concept of the new aircraft (including the aerodynamic layout of the airframe, overall dimensions, and also the calculated parameters of the future power plant), which even theoretically could not create any obstacles to the Indian side in designing the “critical” avionics components of the new fighter. Therefore, since the start of the Fifth Generation Fighter Aircraft program (launched in 2007 year), HAL and the Indian Defense Research and Development Organization (DRDO) had at their disposal a whole decade to develop such a knowledge-based element base: onboard radar with active phased array, multispectral optoelectronic sighting system, sensors for detecting attacking missiles, a digital computer, a warning system about radiation (STR), as well as integrated systems for electronic reconnaissance and electronic warfare.

In fact, the eleven-year-old participation of HAL in the FGFA program was remembered by the employees of the United Aircraft Corporation and PJSC Sukhoi Company by their regular whims and requirements bordering on military-technical blackmail. In particular, the HAL leadership and the Indian Air Force command repeatedly made attempts to “fetch” from the Russian contractor a “package” of 40 critical Su-57 technologies relating to the architecture of the promising on-board radar H036 Belka (Sh-121), the design of the turbojet two-loop afterburner engine “ of the second stage ”“ 30 Product ”, the Himalaya electronic warfare complex, blackmailing negotiators from the UAC by exiting the program. Against this background, the development of the element base for the first Indian AESAR-UTTAM AFAR-radar advanced with a noticeable slipping; even taking into account the fact that the transmitting and receiving modules of the new product are not so difficult to manufacture (in comparison with gallium nitride) gallium arsenide-microwave transistors in hybrid-integrated design.

The situation is not so rosy with the design of the “high-torque” turbofan turbojet engine of the new generation GTRE GTX-35VS “Kaveri” with a deviating thrust vector designed to partially re-equip the Tejas Mk.1 multi-role fighter aircraft fleet and to equip the more modern Tejas Mk.2 »And the promising fighter of the 5 generation AMCA, the development of which the specialists of the Aeronautical Development Agency (ADA) have been unsuccessfully fighting over the past 8 years. Representatives of the Ministry of Defense of India and the leadership of the DRDO have managed to bring the situation to utter absurdity here.

Despite the willingness to purchase arch-expensive French Rafal fighter jets (2 times more expensive than domestic Su-35С), the DRDO management refused to invest only 500 million dollars in the Kaveri project. And this is due to the fact that representatives of the French holding company Safran, specializing in the most complicated process of manufacturing heat-resistant single-crystal turbine blades by directional crystallization, have already expressed their willingness to invest about 250 million dollars in the design of Kaveri. Moreover, the French contractor planned to make this "injection" into the technological development of the GTX-35VS as part of an additional 3,4-billion "package" of military-technical assistance to the Indian defense-industrial complex.

As you can see, the above argument of the Bharat Rakshak journalists about “losing the opportunity to fully participate in the FGFA program since 2004 of the year” is an unreasonable dump into the media space, designed to preserve the reputation of Indian military and diplomatic structures in anticipation of the upcoming conclusion of major defense deals with leading military-industrial holdings of technologically developed states. This is not the only "pearl" of pseudo-experts bharat-rakshak.com.

At the end of their opus, Indian journalists tried to question the uniqueness of the multi-band radar “equipment” integrated in the Su-57 glider with a distributed aperture. But it turned out very crookedly. In particular, it was suggested that the American 5 generation F-35A / B / C fighters equipped with additional antenna modules integrated into the nose of the fuselage and wing socks have the same range of capabilities for monitoring airspace in the side hemispheres as the Su-57, which have additional AFAR modules H036B-1-01L / B (on the lower side faces of the nose of the fuselage) and H036L-1-01 (in the socks of the wing).

It’s just that our Indian colleagues did not take into account a very important detail. At the same time, the H036B-1-01L / B and H036L-1-01 AFAR modules are auxiliary “links” of the H036 “Protein” main radar and provide radar detection of surface and airborne objects in the side and rear hemispheres (adjusting the azimuthal zone) Proteins ”up to 270 degrees), additional antenna modules of the F-35 family of fighters perform completely different functions. F-35 nose-mounted AFAR modules serving the lateral hemispheres are antennas of the protected MADL tactical information exchange channel operating in the Ku-wave band and providing network-centric coordination in the Lightning squadrons during group departures.

Radar overview of the lateral hemispheres and target designation do not produce antenna data; all the more so because their peak power is very small due to the need to realize the maximum stealth of the MADL channel from enemy electronic intelligence equipment. As for the wing antennas of the Lightnings, here we are talking about the on-board electronic warfare complex AN / ASQ-239 Barracuda, operating in the decimeter S-band and designed to counter ground-based surveillance radar DRLO and radar aircraft of the enemy radar. Therefore, this attempt by Indian journalists to underestimate the potential of the Su-57 radar equipment came across a reinforced concrete wall of reality, due to the cardinal technological differences between the architecture of avionics “drying” and the American “Lightning”.

We are in Yandex Zen
Russia is a hostage of a strategic Indian-American conspiracy. Blackmail for the "drain" technology continues
F-35A and the new look of Hel Haavir. Netanyahu's loud statement "stumbles" about the power of modern Iranian air defense
79 comments
Information
Dear reader, to leave comments on the publication, you must to register.