The results of the week: Plus daggers, minus bracelets 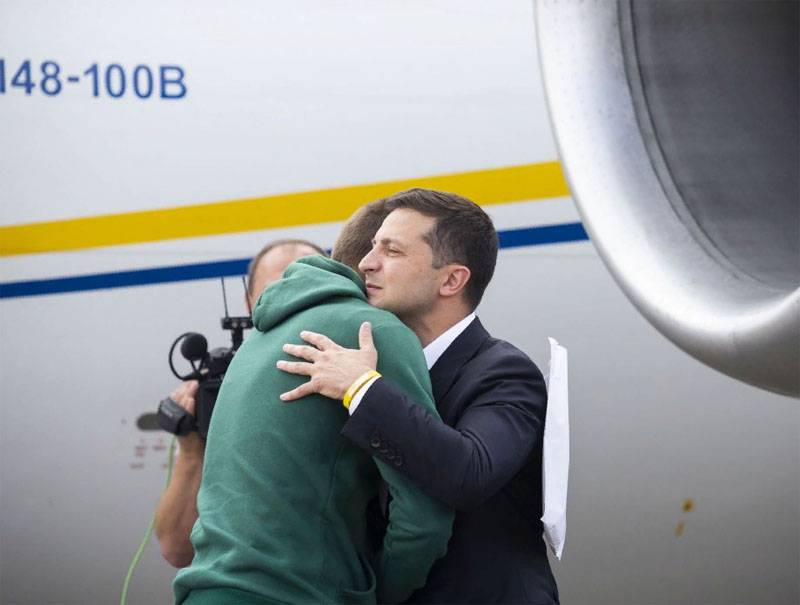 The sailors who returned to Ukraine were awarded military orders, military ranks and officer daggers. This was reported by Ukrainian media with reference to the press service of the Naval Forces of Ukraine.

Sailors returning to Ukraine awarded with orders, ranks and daggers
The exchange began: Kirill Vyshinsky flew to Moscow
Ukrainian "sea wolves" returned home. And there - a complete breakthrough: a meeting with presidential decrees on awarding, personalized daggers, bread and salt. Sarah Netanyahu, who specializes in Ukrainian bread and salt in a special way, was not invited to the celebrations ...

Now in Ukraine and abroad, they are at a loss when the return will turn into the version of Nadia 2.0. And if it doesn’t turn out, then other questions: when will the Ukrainian command transferred to the seamen by the Ukrainian admiral’s ranks and when will the all-Ukrainian media tours begin with the agenda “How to defeat Russia” and “institute the medal“ For undermining the enemy’s fighting capacity by leaving two old armored boats in his port and a raid tugboat. ”

Finally Zelensky was able to take off his colored club bracelets - because his hands were so rubbed that the exchange negotiations had to be intensified.

Then everything will be as with Savchenko - prison and deprivation of awards?
den3080

and daggers for hara-kiri.
Savchenko is unique. They are glad to plan to bombard the building with mortars and then leave on the Dnieper on boats ... who else would come up with this? And who gets so fat during a hunger strike? And the 8 (eight) elections that voted for her?
Not. You won’t find any more.
Dogmatic

Zelensky demonstrates contractability, the Kremlin is moving forward. Everything is pretty ordinary.
"Fedor" descended from heaven to Earth

Roscosmos Corporation announced the successful return to Earth of the Soyuz MS-14 spacecraft. This return is causing increased attention (at least from the media and experts) due to the fact that the Fedor robot returned in the Soyuz capsule.

Robot Fedor with the ISS returns to Earth

Rumor has it that a number of government organizations opposed sending a robot to the ISS in a "human" guise. This is said to be a violation of human rights. Initially, it was necessary to send a robot in the form of a dog. But the flight organizers did not listen. They say that in a dog’s robo-paws, the screwdriver and key on the 24 will not be well fixed. And sending robots in a canine “form factor” could provoke ardent protests from animal welfare activists.

As a result, "Fedor" flew away, worked, flew back. Readers are already interested: when is the reception in the Kremlin and a separate apartment within the Third Transport Ring? .. 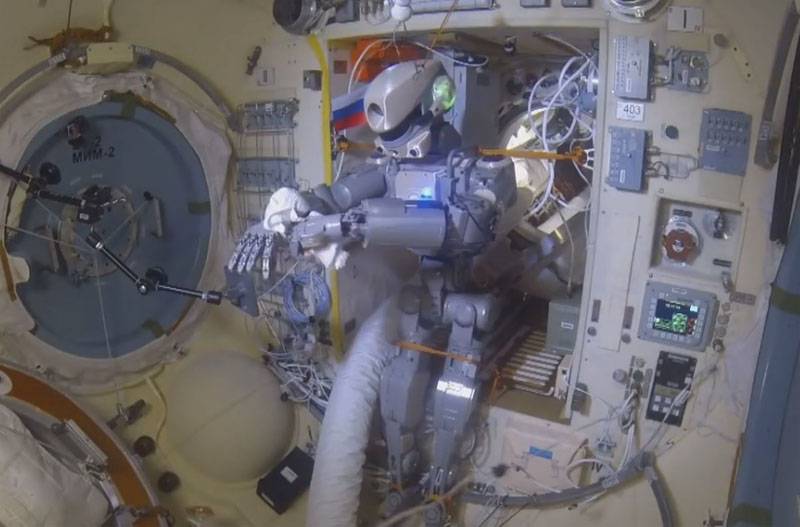 Fedya landed in Kazakhstan. There he is now Fedya.
Mountain shooter

Well, and everyone "drown, drown" ... returned, alive, healthy ... And they certified the ship. The tests were successful.
geologist

Bravo! I will name Fedorovskoye new wine from a new crop barrel No. 3
Bulgarian memory: how many in kilobytes?

Bulgaria betrays its own history. Official Sofia does not want to remember the country's liberation from occupation by Turkey and the Third Reich. The other day, the Ministry of Foreign Affairs of Bulgaria stated that Russia should not support the “dubious historical thesis” that the USSR’s struggle with Nazi Germany was the liberation of Europe. The Bulgarian department also noted that the Red Army "brought the peoples of Central and Eastern Europe half a century of repression."

Official unconsciousness. Why Bulgaria is betraying Russia
The other day it turned out that from 1945 to 1991, Bulgaria, it turns out, was under incredible Soviet oppression. It was the Soviet Union that forced Bulgaria to create new jobs so that thousands of tons of Bulgarian products could find sales markets throughout the socialist camp with 300-million inhabitants. It was the Soviet Union that vainly abused Bulgaria, pouring millions of rubles into it to restore everything that could be restored, and if not restored, then rebuilt. Hundreds of thousands of Bulgarians live in hated housing, which grew up on Bulgarian land with hated Soviet money. Millions of Bulgarians generally live, simply because the hated Russian Ivan saved them from death.

But how easy, it turns out, it is forgotten when faces elite sit up, ready for the applause from Washington and London to carry Russophobic nonsense under the guise of "restoring historical justice."

In general, Bulgaria's historical memory is extremely limited to a few kilobytes. Oh, what are there "mega" and "gig" ...

Why is Bulgaria betraying Russia?
The answer is simple - because at one time the USSR = Russia betrayed Bulgaria, and all the socialist countries of Eastern Europe, and not only them, if you recall Cuba, Vietnam, etc., refusing to cooperate with them for the sake of the "partner" West, having surrendered not only the interests of these countries, but also their own. So, before blaming others, you need to look at yourself, your policy towards these states. We are reaping the results of the treacherous Gorbachev-Yeltsin policy.
qQQQ

Why is Bulgaria betraying Russia?
Yes, because all these "little brothers" are used to having them, and when they stopped paying, then friendship ends. Nothing personal just business. There is no need to re-create illusions and tell tales of brotherhood to ourselves, there are only interests.
Pissarro

Bulgaria betrayed Russia three times before perestroika. Both world wars she ended up in a foreign camp. And in the third world, she is in the NATO camp, the fourth betrayal only captures elementary facts.
Italian hospitality

The United States again resorted to the dirty tricks of competition. Alexander Korshunov, business development director of the United Engine Corporation, which is part of Rostec, was arrested in Italy. 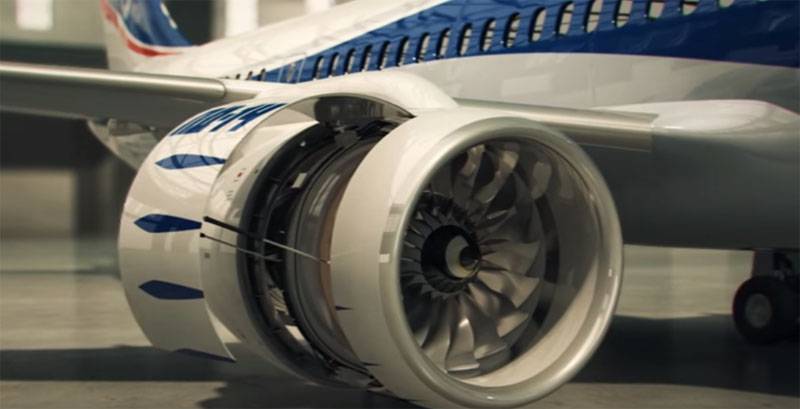 Rostec top manager detained at US request in Italy: revenge for PD-14

Following the detention in Italy of one of the participants in the project to create the newest Russian PD-14 engine, deep concern was expressed. It’s hard to say what kind of concern this is for the frank abductions of Russian citizens on American incitement abroad. But on the other hand, the question is also this: the person who is one of the leading employees of the largest technology concern in Russia, which is connected, inter alia, with military developments, has not found any other place to relax, except for Italy. No, the Italian people, as they say, are almost brotherly to us since the time of the honest fighter against crime, Commissioner Cattani. But, in principle, with the same success, the top manager could fly on vacation right away to the District of Columbia, so that the American secret services would create less hassle ...

Well, where did you go? What for? Our Crimea is already ours, but some of the extraordinary without the Roman ruins and Sicilian pasta, you know, can not rest. Expect Italian hospitality. Well, they did.

In general, a person with his baggage of information needs to be pulled out by any means. Well, for others to print a memo that not every vacation on the coast may be beneficial to health.

Frank international banditry in all areas with a full bunch of aggravating.
Fan-fan

What the hell went to Italy? Korolev, Kurchatov and others did not ride abroad, and do not feed these bread, but go to the "masters".
Leeds

We will respond with loud statements and protests, as always firm and decisive. Mossad would have brought someone to Tel Aviv with a bag on his head. 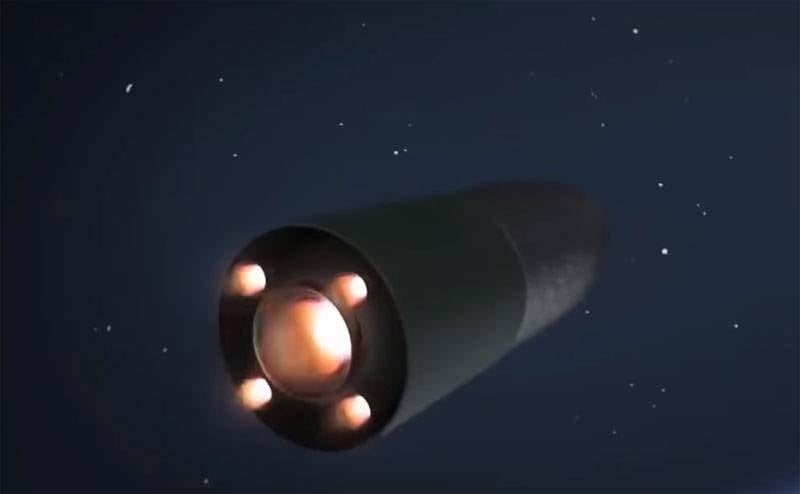 An unexpected statement was made by the President of Russia, who is in Primorye at the Eastern Economic Forum. The statement made by Vladimir Putin concerned the proposal he made to his American colleague regarding the latest weapons.

But purely hypothetically - the US president says: “On hands, Vladimir! I’m buying a dozen Vanguards and a dozen or two Daggers - we’ll attach the Daggers to our F-15. ” Well, as if for fun too, because Trump, as you know, is a showman with experience. But in this case, Donald did not hold out. Either he did not master the humor, or, once again, all thoughts were golf.

By the way, cooperation could also be offered - to open a plant for the production of hypersonic planning combat units in Oklahoma, and to enter the world market together ... At a minimum, Indian partners would be put into a trade deadlock - either buy or integrate their own production with the Chinese ...

And if Trump said: - I want to! Would it be sold?
Then it would be trolling from Trump.
Romka47

A “joke” with a political motive, everyone here and there, and below, and above understand that
1) We would weapon did not sell
2) USA will not buy weapons from us
Just a hint that we have, but you do not.
The Americans are harsher: the nuclear bombings of Hiroshima and Nagasaki - it was the same hint: we have, you don't.