8 September 2019
110
In the late forties in the United States began work on artillery systems of special power, capable of using shells with a nuclear warhead. The first specimen of this kind to come into operation was the M65 gun. The gun, nicknamed Atomic Annie, was not built in a large series, but took a special place in stories American artillery. 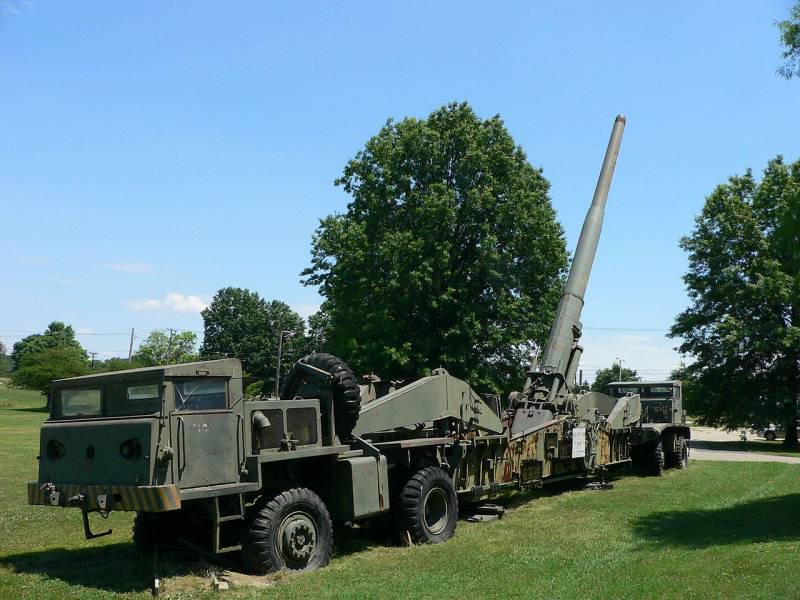 In the interests of the army

The first prerequisites for the appearance of American nuclear artillery took place at the final stage of World War II. Faced with German railway artillery, American troops wished to have their own weapon with similar characteristics. At the end of 1944, the development of the promising 240-mm T1 long-range gun began.

In 1947, the air force was separated from the army into a separate military branch, as a result of which the ground forces were left without their own nuclear weapons. After lengthy disputes in 1949, it was decided to start developing special ammunition for land artillery and guns for them. In May 1950, the T131 project was launched, which provided for the creation of a new 280-mm transportable gun using T1 developments. In parallel, the creation of a special ammunition. 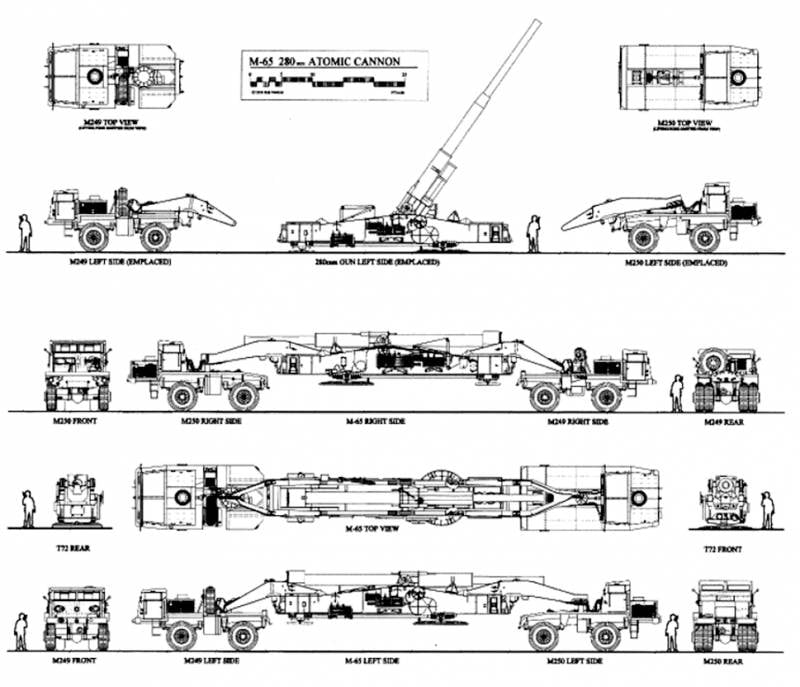 Components of the complex and systems in different configurations. Figure Globalsecurity.org

The development of the T131 gun was carried out in the Picatinny arsenal with the participation of several other organizations. When designing, specialists had to solve a number of specific design problems, and some of their proposals were of great interest. For example, the T131 part was taken as the basis for the T1 barrel. The existing 240-mm barrel had a sufficient margin of safety, and it could be drilled to a larger caliber.

280-mm gun needed a special carriage and specific means of transportation. This problem was solved with the help of two regular tractors of a special design. With their help, the gun could move between positions. Deployment took no more than half an hour. The means of transportation of the guns were borrowed from the finished project with serious improvements. 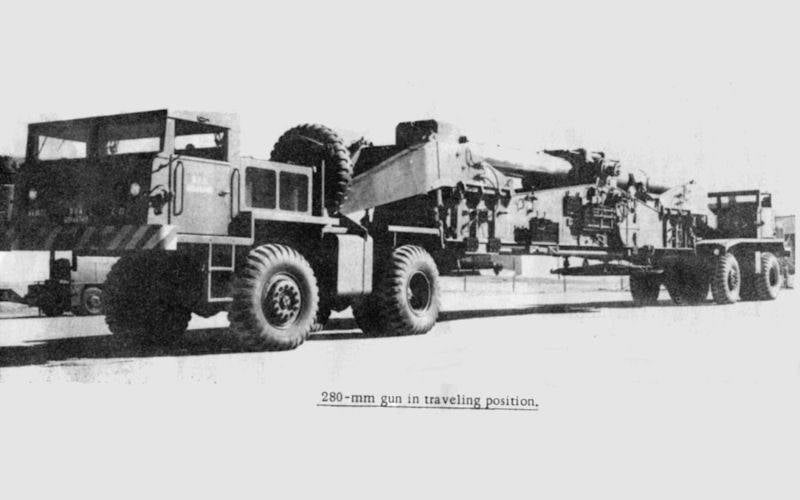 The T131 design process coincided in time with the outbreak of the Korean War, which was the reason for the acceleration of work. The technical project was completed at the end of 1950, and only a few months later the first prototype gun appeared. Then the tests started.

The operation of serial guns began in the first half of the fifties, but officially they entered service only in the 1956. The official army index M65 was assigned to the gun. There was also the nickname Atomic Annie ("Atomic Annie") - a hint of the name Anzio Annie, coined by the Americans for the German high-powered guns K5.

In fact, within the framework of the T131 / M65 project, they created a whole artillery complex, which included all the necessary devices and systems - from guns and ammunition to transportation means and communication systems. The complex also included individual vehicles for calculation and ammunition. 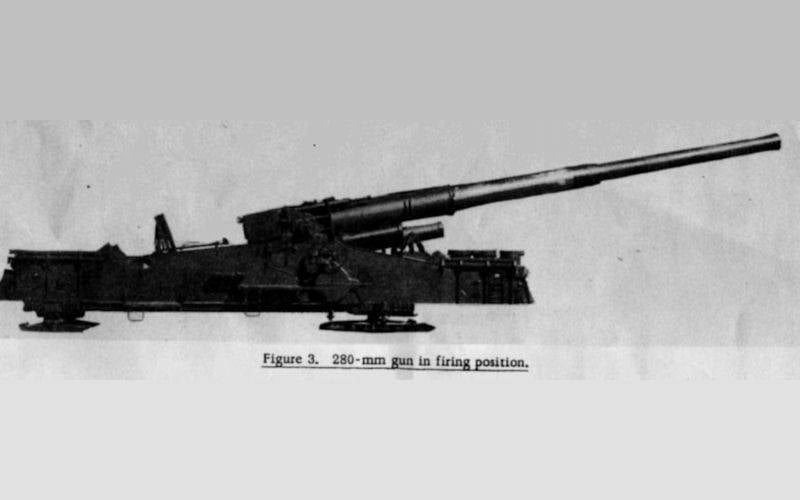 The T131 / M65 gun was a rifled gun with a caliber of 280 mm. A trunk length of 38,5 feet (11,7 m) was used. The breech was equipped with a piston shutter, diverted down. The barrel was fixed on a swinging part with developed hydropneumatic recoil devices. Using a hydraulic actuator, vertical aiming was carried out in the range from 0 ° to + 55 °. The barrel could move on its mounts along its axis. For transportation, he lowered to a horizontal position, and then retracted backward, shifting relative to the mounts. After that, the barrel did not protrude beyond the gun carriage.

The swinging part with the gun was fixed on a special T72 carriage. It was made in the form of a solid frame with developed side walls, between which the swinging part was suspended. A support plate with a diameter of approx. 3 m. A smaller plate was located at the other end of the gun carriage. The main support had an axis on which the carriage rotated for horizontal aiming within a sector of width 15 °. 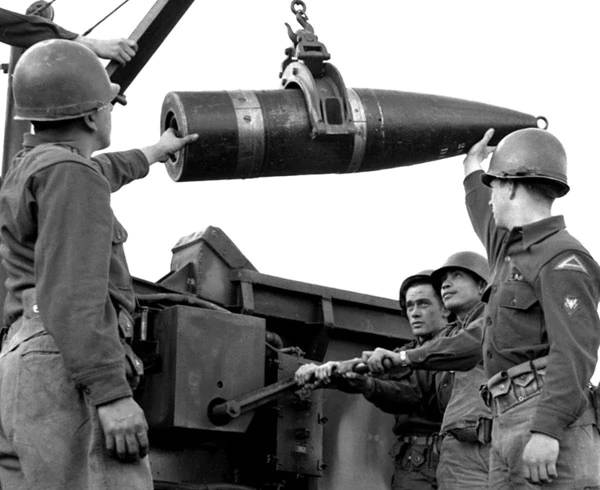 Preparing for the shot. Photo Guns.com

T72 was equipped with its own power plant, which ensured the operation of the drives. Hydraulics was responsible for aiming in two planes and for supplying the components of the shot to the barrel. There were also redundant manual drives. A characteristic feature of the T72 gun carriage was the presence of additional buffers that extinguished the remaining recoil momentum.

The carriage with the gun was transported using a pair of special tractors developed by Kenworth Truck Company. M249 and M250 machines, with the help of special restraints, had to pick up and lift the T72 product. At the same time, a design with two joints was formed, which has sufficient mobility, cross-country ability and maneuverability.

The "leading" M249 was a tractor with a front cab, an 375 horsepower engine. and wheel formula 4x4. The “closing” M250 machine had the same composition of units, but differed in a rear-mounted cab, in front of which was placed a fork for lifting the carriage.

Before firing, the M65 complex was supposed to arrive at the position, after which the T72 carriage was lowered to the ground, the tractors retreated, and the gun was put into combat position. To leave the position it was necessary to lay the barrel and hang the carriage between the tractors.

The total length of Atomic Annie in the stowed position reached 26 m, in combat - less than 12 m. The transport height was not more than 3,7 m. The total mass of the complex reached 83,3 m, of which 47 m was a gun mount. The maximum speed of the complex on the highway is 45 miles per hour (more than 70 km / h).

The objective of the promising weapon was to defeat important enemy targets at the operational and tactical depth using conventional and nuclear shells. For M65, there was only one conventional munition - the high-explosive T122. This product had a mass of 272 kg and carried 55 kg of explosive. The initial velocity of the projectile reached 760 m / s, the maximum firing range - 28,7 km. 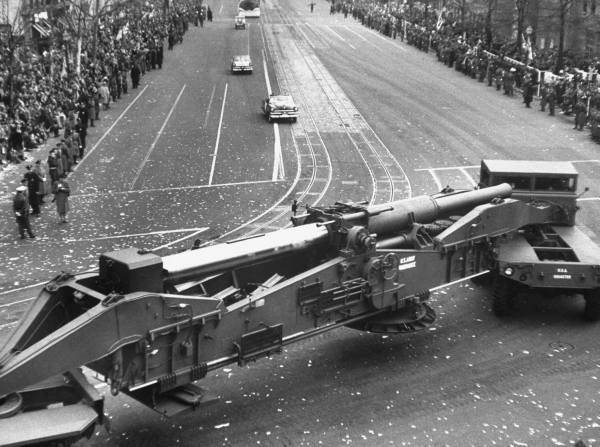 In the early fifties, the first American artillery shell with a nuclear warhead was created - W9. The 280 mm product had a length of 1,38 m and weighed 364 kg. In the shell of the shell was a nuclear device of the cannon scheme with 50 kg of enriched uranium. The estimated blast power was 15 kt TEQ. The shell accelerated in the barrel to 630 m / s and could fly at 20-24 km.

In 1955, the W19 shell appeared, which was an upgrade of the previous W9. It was slightly longer, but weighed 270 kg and carried a charge of similar power. Due to the reduction in mass, the initial velocity was increased to 720 m / s, and the range to 28 km.

Guns in the ranks

Testing of individual M65 system components began in 1950-51. In the spring of 1951, a full-fledged artillery complex, built as part of the cooperation of several organizations, was sent to the Nevada training ground. For some time, the tests consisted of checking the components of the system, and firing was carried out only by practical and high-explosive shells. 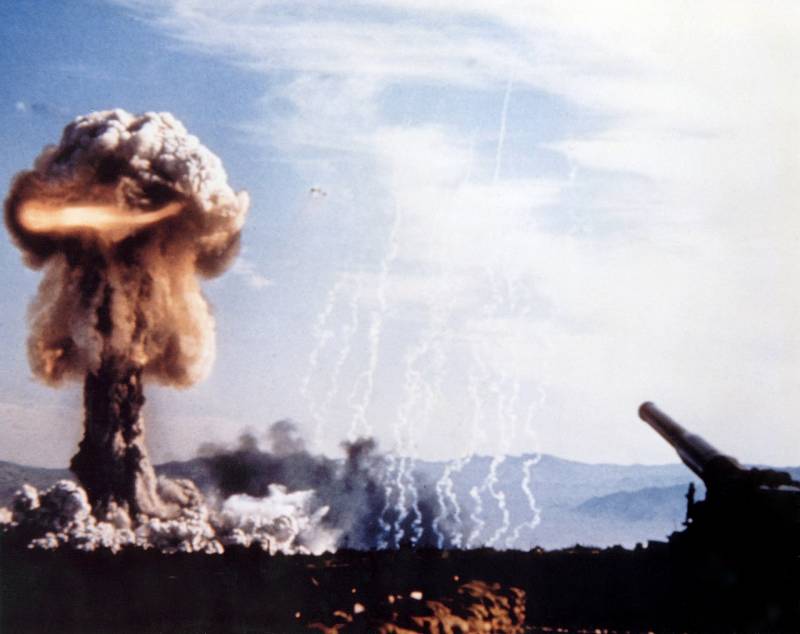 Operation Grable - a weapon and the result of his shot. Photo US Army

20 on January 1953 The T131 gun was first shown to the public. It took part in a parade dedicated to the inauguration of President Dwight Eisenhower. The new weapons expectedly attracted attention both in the United States and abroad. Published data on him became an additional incentive for foreign projects of atomic artillery.

In May of that year, one of the M65 guns was involved in the Upshot – Knothole nuclear test. On May 25, a test blast took place with the Grable code - Atomic Annie sent a real W9 shell to a conditional target at a distance of 11 km. This was the first and last case of the use of special weapons with a nuclear projectile in American practice.

By this time, mass production of guns was launched. In just a few months, they built a total of 20 artillery systems worth 800 thousand dollars each (about 7,6 million dollars at current prices). The constructed guns were distributed between several artillery units of the ground forces. 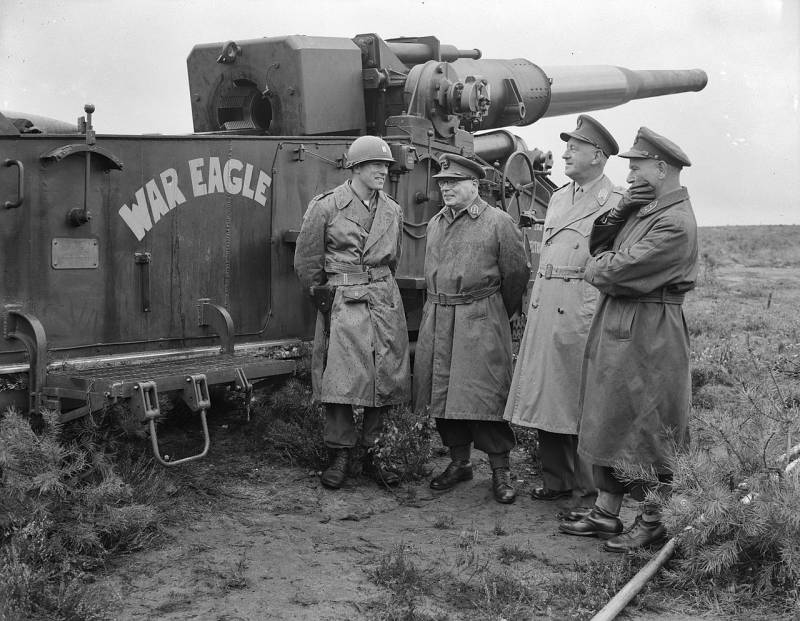 One of the M65 guns during NATO exercises in Germany, 15 Sep 1955. Photo by the National Archives of the Netherlands / nationaalarchief.nl

In October 1953, M65 guns appeared in Europe. They arrived in Germany as part of the armaments of the American 868th field artillery battalion. Soon, guns of special power went to South Korea. At that time, nuclear artillery was considered both as a real tool for use in war, and as a means of demonstrating strength and intentions.

Already in the mid-fifties, the barrel artillery began to lag behind its characteristics from modern and promising missile systems. Tools of special power, such as the M65, had no particular prospects and should have left the stage in the near future.

In the case of atomic artillery, it was not only a question of tactical and technical characteristics. Of great importance were the military-political consequences of the presence of such weapons, as well as questions of prestige. For this reason, the army was in no hurry to abandon Atomic Annie, even when obsolescence became apparent. 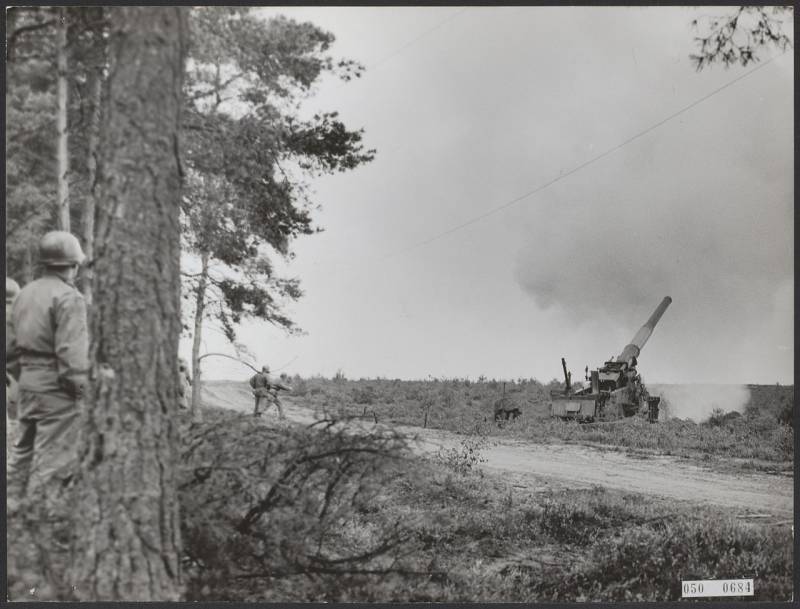 Shooting in exercises - without nuclear shells. Photo by the National Archives of the Netherlands / nationaalarchief.nl

M65 was withdrawn from service only in 1963. By this time, the army received new, more advanced models of tactical nuclear weapons, showing obvious advantages over the gun. The development of technology has allowed the creation of new nuclear shells of smaller calibers, compatible with existing weapons. As a result, "Atomic Annie" became the first and last cannon, originally created for a special munition.

After decommissioning, the fate of the M65 guns was different. More than half of the products went to remelting. Seven guns were preserved in museums. Some of them are shown only with a gun carriage, but several complete complexes with standard tractors have been preserved. Of most interest is the cannon from the Fort Sill Base Museum. It was she who, in 1953, participated in the Grable tests and fired a single shot with a real nuclear projectile.

The M65 gun has a special place in the history of US artillery. It was the result of a single attempt to create a specialized weapon for a nuclear shell. The resulting product had limited prospects and quickly became outdated. For this reason, the concept of a separate atomic weapon of special power was abandoned. Much more profitable was the introduction of special shells of smaller caliber in the ammunition of other guns and self-propelled guns.