Is it necessary to install the T-90M tower on the "Armata"?

6 September 2019
123
Development and testing of a new tank “Armata” is being delayed for various reasons. There is no tank in the troops yet, in connection with this, some exotic ways are beginning to be proposed to speed up the issue of introducing the tank into the troops. One such way is publicationin which, in connection with possible problems with the uninhabited tank tower, it is proposed to install the inhabited T-90M tank tower on the Armata platform or return to the unified tower, which was previously developed on the already forgotten Burlak theme. 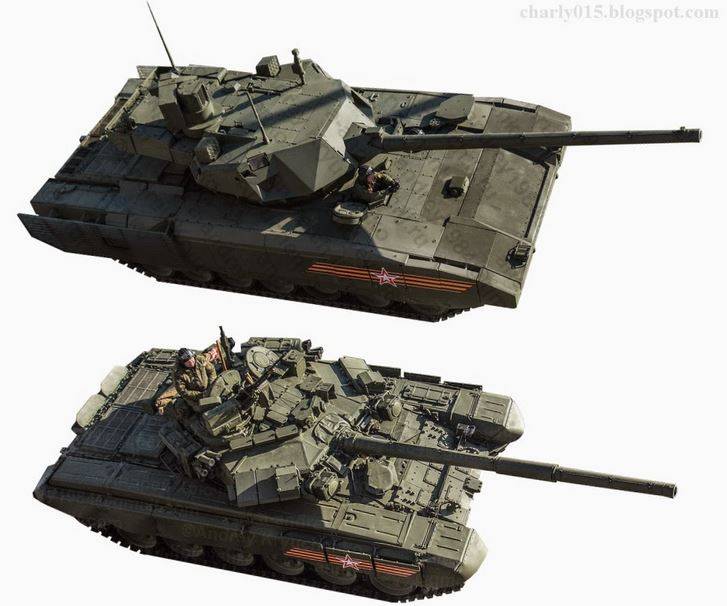 How serious this is and what is behind it is not entirely clear, at least it is proposed to create a new tank on a modular basis using a set of modules from both existing and developing tanks. This issue has already been discussed several times and it is more relevant when creating special purpose vehicles on the basis of the tank.

Does the tank need modularity? This issue must be considered in several aspects, from the point of view of the production, modernization, repair and operation of tanks. In tank production, modularity is important to simplify and reduce the cost of production. When upgrading tanks, modularity allows with minimal modifications to install more advanced modules. For simplicity and ease of repair, interchangeability of components and parts of the tank is important. When operating the tank, modularity does not matter. With what modules the tank left the factory conveyor, with which it lives until it is decommissioned, no one at the same time replaces the combat units or power plants.

Another thing is when special-purpose vehicles are developed on the basis of the tank: anti-aircraft, missile, flamethrower, repair and evacuation and other purposes. For this, the fighting compartment module is removed and another target module is installed in its place.

In the tank of the classic layout, two main modules can be distinguished: the fighting compartment (turret, armament, sighting system and automatic loader) and the power plant (engine, engine systems and transmission). The question of the interchangeability of these modules was repeatedly considered at various stages of the development of Soviet tanks, which is typical for the example of the formation and development of the T-64, T-72 and T-80 family of tanks.

This family was created as modifications of one T-64 tank, almost the same interchangeable module of the fighting compartment was installed on all tanks, on the T-72 it differed only in automatic loader. The power plant modules were three options with 5TD, B-45 and GTD engines, which, with minimal structural modifications, were installed in any tank hull.

On this family of tanks it was forbidden to change borrowed units and parts without the consent of the documentation holder. For example, when I was a young specialist in design bureaus, in 1973 I was instructed to consider a letter from N. Tagil asking me to change one size in the detail of the sighting system of the T-72 tank commander. I was surprised then that, despite the fact that the T-72 tank was already mass-produced there, in order to exclude unification of borrowed units and parts, the tank designer did not have the right to change something in the design of the unit that was installed on another tank, and that was justified. This approach persisted for a long time, although three tank modifications were already produced in serial production at different plants. Subsequently, this principle was violated. Instead of three modifications of one tank with different power plants, three different tanks appeared with the same tactical and technical characteristics.

The towers on these tanks were also interchangeable in seats and docking nodes through the same type of rotating contact device through which control signals were transmitted from the tower to the hull and vice versa.

This principle made it possible in 1976 at the request of senior management to remove the turret from one of the T-64B tanks, which passed the first stage of testing with the Ob and Cobra sighting systems and put it on the T-80 body. So, after the second stage of testing, the T-80Б tank appeared with the most advanced weapon system at that time.

On tanks of this family, serious attention was paid not to the ability to change these modules during the operation of the tank, but to the possibility of mass and cheap production of tanks and the possibility of quick and cheap repair and modernization of tanks by maintaining the interchangeability of components and assemblies. Then, under the modules, for example, the power plant, we mean the monoblock of all power plant units, which can be quickly replaced during the repair of the tank.

Why does the Armata tank need the T-90M and Burlak towers?

Returning to the proposal to install an inhabited T-90M tank tower on the Armata platform platform, we must first understand the purpose for which all this is being conceived, the technical capabilities of this implementation and the possibility of achieving this goal.

They try not to advertise the reasons for delaying the adoption of the Armata tank. Surely there are also technical problems with certain components and systems of the tank, which have not yet been brought to the required level. There are also conceptual issues of a fundamentally new layout of the tank with an uninhabited tower.

I have already written that the uninhabited tower is one of the most problematic issues in this tank layout. In the event of failure for any reason of the tank’s power supply system or damage to the device that provides control signals from the crew from the tank’s hull to the tower, the tank becomes completely unworkable, there are no duplicate fire systems in the tank. Tank - weapon battlefield and should provide high reliability for firing at possible system failures, and in this direction we must continue to search for ways to increase the reliability of the tank during operation in real conditions.

The proposal to put a tower on a new tank from a serial tank looks somehow frivolous. Firstly, the Armata tank is of a fundamentally different, non-classical layout, and when I created it, as I understand it, no options were provided for “crossing” with tanks of the existing generation. Of course, you can consider any options and realize them is possible, but what it will result in, how much it will cost and whether the required efficiency will be achieved, the big question. Secondly, as I understand it, the main task is to return to the inhabited tower, but there are other much more effective design solutions for its solution.

When implementing this proposal, a number of purely technical questions arise: how close are the docking units of the Armata hull and the T-90M turret, what is their diameter of the shoulder strap and the design of the turret turning mechanism, is the height of the Armata hull enough to accommodate the turret mechanisms and automatic loading system, how compatible are the control signal transmission systems from the hull to the tower.

Just installing such a tower does not solve many problems with the layout of the Armata tank, in this tank the entire crew is placed in an armored capsule in the tank’s hull, and the T-90M has two crew members located in the tower. Therefore, the hull of the tank will have to be re-arranged and decide what to do with the capsule, and one of the advantages of the Armata tank will be lost - placing the entire crew in a well-protected armored capsule.

The installation of such a tower can lead to a change in the mass of the tank and a displacement of the center of mass, and how this will affect the power plant and chassis, it is necessary to calculate. So far, such a proposal is very crude and in many aspects it is not justified. If a problem with an uninhabited tower really arose, then in order to increase the reliability of firing from a tank, it is easier to work out a backup version of the layout with an inhabited tower that solves this problem. If this is the case, then the designers in this direction will probably already be working and it will be much more productive than making any palliatives with an incomprehensible result.

An attempt to "cross" the tanks of the new and previous generations with a fundamentally different layout will not lead to anything good. This problem was easily solved on the T-64, T-72 and T-80 family of tanks. There the tank towers were interchangeable and easily installed one instead of the other.

On the new generation of tanks, modularity, of course, is needed in terms of creating a family of special-purpose vehicles on this basis. At the same time, the accepted concept of the layout of the tank should not collapse.

Even more exotic is the proposal to put on the Armata platform a tower developed in the 2000's on the theme of the Burlak as a unified fighting compartment for the modernization of the T-72 and T-80 tanks. This search work ended in nothing, only a paper project, and had no further development. The principal difference was the new overloaded tower with the ammunition delivered to the stern of the tower and a new automatic loader, and this mythical tower is completely incomprehensible what will bring new to "Armata".

So, there is no urgent need to install a tower from a T-90M tank or a tanker developed on the topic of Burlak on a new generation tank, this gives little and the goal is very doubtful.

It should also be borne in mind that the Armata tank has a lot of new things besides the layout. This is a power plant with a fundamentally new engine, a gun with high muzzle energy, active protection of a new generation, a tank information-control system, a radar system for detecting targets on the battlefield and a system of all-round visibility from the tank. All this goes through a cycle of testing and refinement and should not die if the accepted concept of the layout of the tank is unsuitable.

Now the military is thinking about the future of the Armata tank, the wave of euphoria has subsided and the stage has come when it is necessary to carefully weigh everything, conduct tests and, having their results in hand, decide on the fate of this tank, and not look for some palliative solutions that fundamentally do not solve this problem.

The most optimal here is the development of two options for the layout of a new generation tank with an inhabited and uninhabited tower, the manufacture of batches of such tanks, their military tests, including in real combat conditions in one of the hot spots, which is now more than enough. Based on the results of such tests, to conclude which layout is most rational for a new generation tank, and to implement it in mass production.

We are in Yandex Zen
The project of the unified combat department "Burlak"
OKR "Burlak": spotlights and their implementation
123 comments
Information
Dear reader, to leave comments on the publication, you must to register.