Latvian Legion of Death: swastika instead of conscience

July 10 2012
242
The Latvian Legion Waffen SS, which became famous during the Second World War for its particular cruelty and cynicism in the destruction of the Jewish and Slavic peoples, in modern Latvia today is truly crowned with laurels of heroes. Divine services are held in their honor in the Dome Cathedral in Riga, and organ music resounds loudly.

The Latvian detachments that were in the service of the Reich during the war years are better known as the famous Latvian SS Legion. At the very beginning of the last century is to look for deep roots stories his creations, when only Latvian collaborationism and national chauvinism were born. In Latvia, pro-fascist organizations appeared immediately after the end of the First World War, for example, the Latvian National Club and Aizsargi (“guards”), which were formed from 19 to 22, the 20 century. 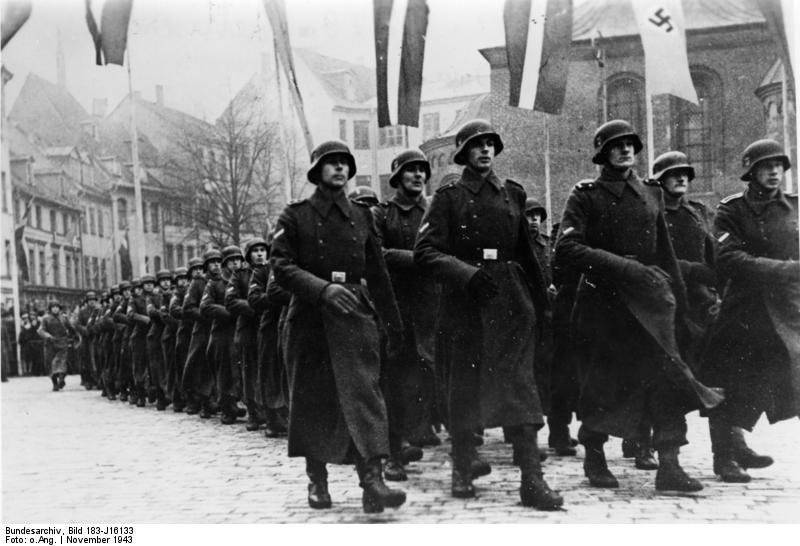 The anti-human nature of the Latvian national chauvinists in all its “glory” manifested itself in the summer of 41, when a wave of pogroms spread across Latvia. In the same fatal year, Heydrich, the head of the Main Directorate of Security of Germany, sent a directive to all Einsatzgrupp commanders, on the basis of which it was prescribed “not to interfere with self-purification aspirations from anti-Jewish and anti-communist circles in territories under control.”

In early July, the 41-th “Arais team” was formed, burning down the Riga synagogue together with the local inhabitants, hiding in it from the Latvian “fascists”, including about 2000 Jews. Over time, the number of members of the “Arajs team” increased to 3 thousand people who wore bandages on their sleeves with the image of crossbones and skull. In addition, the words “Security Auxiliary Police” were present on the bandages. Soon the “Arajs team” was frankly dressed in the form of the Nazi troops “SS”. From that moment on, mass executions of Slavs and Jews became routine work for Latvian Nazis. 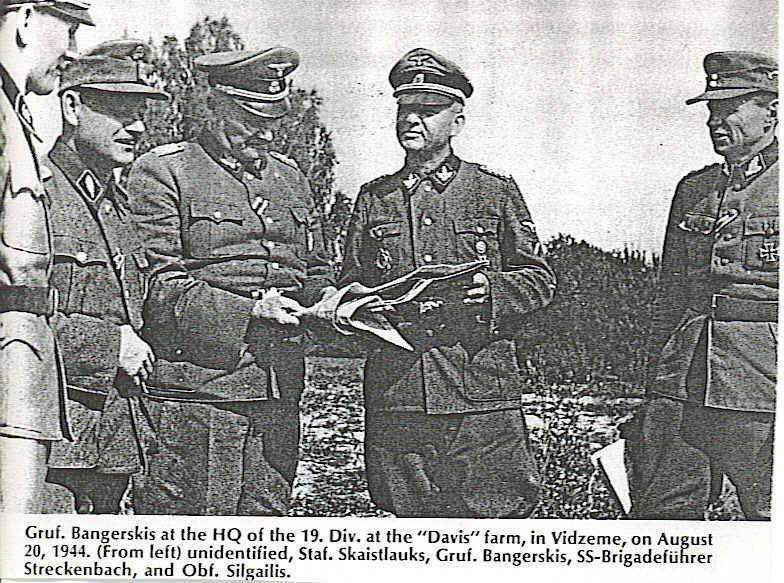 In October 1941, the 1-th Latvian battalion was sent as part of the SS to fight with the Soviet partisans. At the same time, consent was obtained from the Wehrmacht, according to which the voluntary Latvian Legion of the SS was created. And in February 1943, Adolf Hitler endorsed the order, according to which the “volunteer Latvian SS legion was created as a combat unit”. The legion was commanded by the German General Hansen, while the Latvian General Bangerskis was appointed the inspector general, who soon received the title of Gruppenführer of the SS group. Those who joined the legion took the oath personally to Hitler. The 19 and 15 divisions in March 1944 of the year became part of the already “famous” 6 corps of SS groups, which in turn was included in the 18 army, better known as the army group called “North”. This army group at that time controlled positions along the Great River, north of the cities of Pskov and Ostrov. The name “volunteer” division was replaced in mid-June 1944 by “Waffen”. So, on the territory of Ukraine punitive 22 th Daugavpils police battalion inhumanly operated in the areas of Lutsk and Zhytomyr. Already in the summer of 1942 in Belarus, the German police transferred the town of Slonim to the 18-th Latvian police battalion. And on the same day, his commander Rubenis ordered the brutal destruction of the ghetto, where there were more than 2000 Jews. 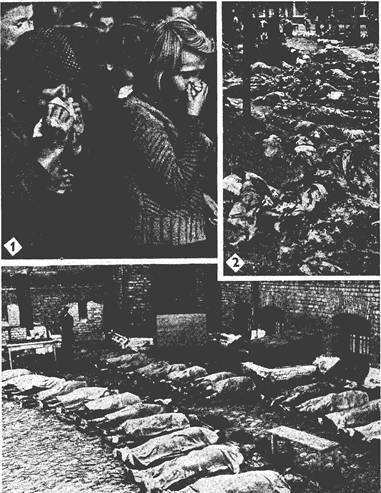 In 1943, from February to April, units of the Legion took an active part in the operation, popularly known as the “Winter Magic” or the “Oceian tragedy”. The name is directly connected with the Belarusian urban settlement of Osveya, Verkhnedvinsk district, Vitebsk region. The operation aimed at creating a neutral 40-kilometer zone, covering such cities and towns of Belarus and Russia as Osveya, Drissa, Rossony, Sebezh and Polotsk. The supposed strip of land without settlements and residents was supposed to be partisan to deprive strongholds. In the operation, led by the SS Obergruppenfuhrer SS Ekkelnom, the Latvian battalions 7 took part, as well as one Ukrainian and Lithuanian company. The total number of participants is 4000 people. At the entrance to the village, the police shot down anyone who could, in their opinion, be an accomplice of the partisans. Immediately, village invalids and old men were shot, and women and children were sent to national camps, from where the doomed were sent immediately to death camps.

Most of the prisoners came to Salaspils, located near Riga, where women were taken away from women and sent to Germany for work. In the conduct of the operation, these nonhumans destroyed hundreds of villages, in which sometimes they lived up to 1000 and more. Only in Osveysky district, the Latvian hangers-on burned 183 villages, shot, and then burned more 11 000 people, among whom more than 2 000 are young children. With the territory of Belarus with the complicity of the Latvian Nazis more than 14 000 residents were taken to Germany for work. It is noteworthy that the Ministry of Justice of Germany considered the operation called “Winter Magic” to be nothing more than a crime against humanity and humanity.

The 25 th police battalion with a company of Lidums from summer to autumn 1943 carried out punitive operations against partisans based in the Pripyat marshes. In addition, the Latvian SS battalions participated in the execution of 500 prisoners, mainly of Belarusian origin, who were kept in the concentration camp of the village Porohovo. The 18 police battalion showed the greatest atrocities on the Belarusian land, of which the 73 monster was awarded the special model head of the SS and the Belorussian police with a medal designed for representatives from Eastern nations - “For the courage of 2 degree”.

In the 44 year, punitive operations in the territory in Belarus were already carried out by 3 such police regiments as the 2 th Liepāja regiment, which operated throughout the Polotsk-Daugavpils railway, and the 1 th Riga volunteer regiment, which operated under Nevel. Punitive operations ended only in May 1944. For example, only in the village of Kobylniki, the Latvian fascists tortured and killed about 3000 civilians. 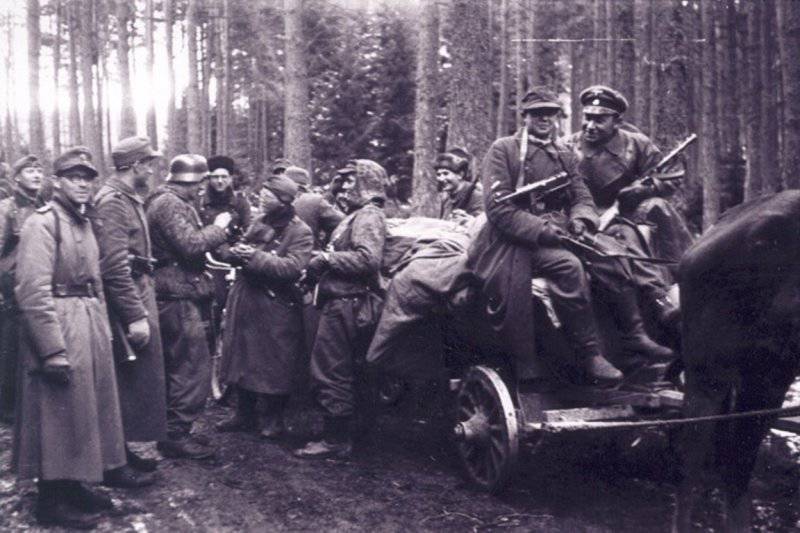 Latvian police regiments at the beginning of 1944, together with German and Estonian police battalions, took part in a large punitive operation against partisans near the village of Vetrino, located in the Polotsk district of Belarus. All the villages encountered on the road, punitive simply burned, and the people living in them, were shot. As Elizaveta Petrovna Kroman recalled, an eyewitness of the inhuman actions of the Latvian death legion and a resident of the Osvea district: “... I, like others, were arrested for allegedly contacting partisan formations and brought to Kushkis Alfred for questioning. Immediately after the interrogation, the inhabitants of our village (girls, old people, women and children), about 100 people drove like animals to two sheds, counting out 10 people, shoved people into them…. And the shooting began. After 100 was left from 10, among whom I was, they put us in 20 meters from the shed. Then set fire to the barn .... The fire burned human flesh - screams, groans, pleas for help .... Together with the barns, all residents burned ... ”

In August, 1943, the 43 th rifle regiment of the 19 SS division, exterminated the 15 prisoners of the 65 th guards rifle regiment, who were captured in the Latvian village of Bobryni. 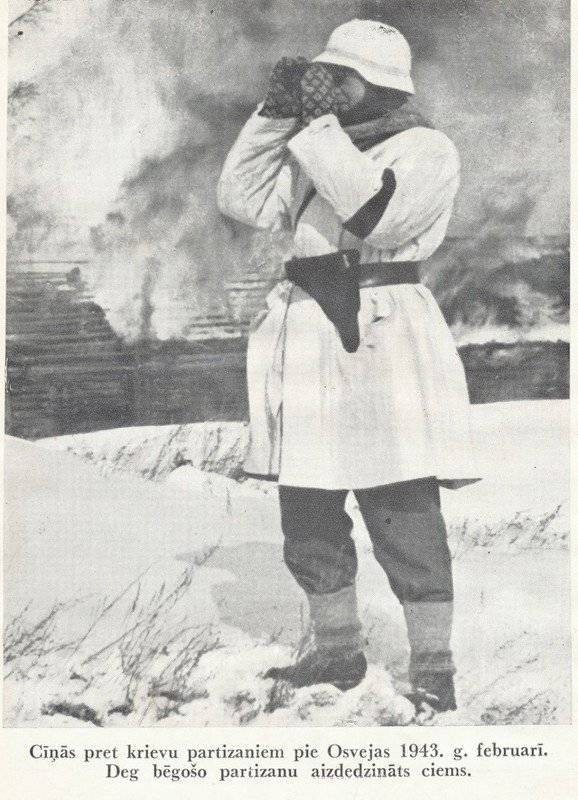 In battles against partisans near the village of Osveya in February 1943.g.

According to a special report by the head of the SMERSH counterintelligence department (2 of the Baltic Front) “On the outrages of the fascists and their Latvian accomplices on Soviet prisoners of war”: “On the night of August 6 of the 65th Guards Rifle Regiment of the 22th Guards Rifle Division of the unit’s unproductive inspiration section. . The Germans with Latvians from the SS division were able to bypass the military guards order, to attack them from the rear, cutting off a small group of Soviet military from their units. An 43 man was injured. German bastards, capturing prisoners, staged a massacre on them. Captured fighters, they gouged out their eyes, inflicted multiple knife wounds, cut out the stars on their foreheads, twisted arms and legs, kicked out their teeth with their boots. None of the wounded, who were captured by the Germans and the Latvian fascists, could not escape the painful humiliation and torture. According to the data that has become available today, the brutal massacre of wounded Soviet officers and soldiers were made by nonhumans of the 43 Infantry Regiment belonging to the 19 of the Latvian SS group divisions. ”

This fact was confirmed at the court hearing of the Nuremberg Tribunal. As a result of the investigation, it was established that the practice of shooting unarmed prisoners was a common occurrence in the SS divisions, which most directly affected, including the Latvian divisions. 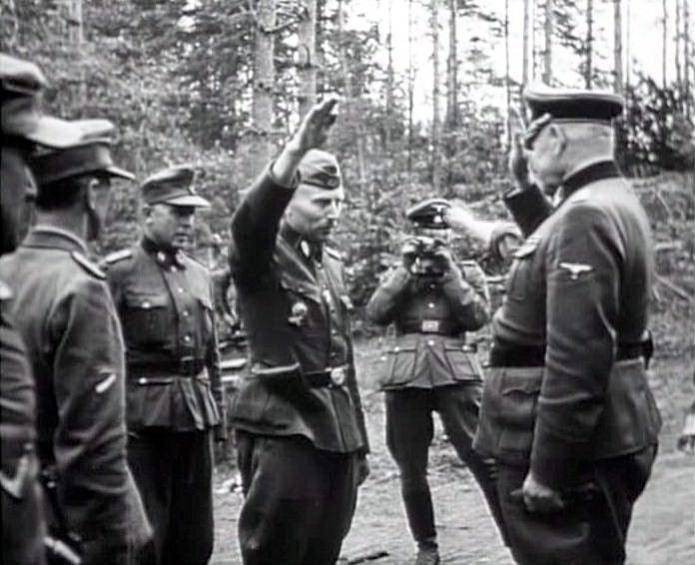 At the end of July, 44, with its offensive, Soviet forces forced the group North, which included Latvian divisions of 2, to continue their retreat to the west. Only in October of 44, the city of Riga was liberated by Soviet soldiers. Until the German capitulation, the German group, which included the 19-I Latvian division, continued to hold positions in Kurland. The legionnaires who got into the Kurland boiler were able to disarm the soldiers of the Soviet army. In Berlin, the last 1945-I Latvian division was defeated in Berlin in April 15, the scattered units of which surrendered to the American and Soviet troops. 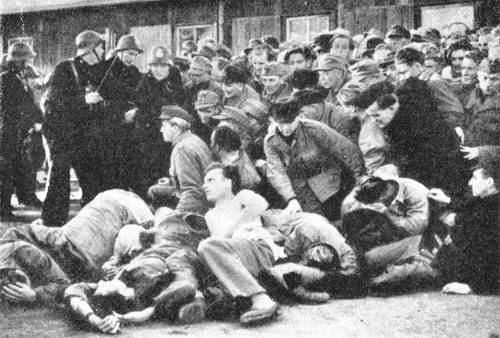 The film tells about the tragedy of the Belarusian-Latvian borderlands - the sweep of the north of Belarus under the "Great Latvia". Old people of Rositsy, Braslavshchiny, historians, priests testify. Terrible история from the recent past that you need to know so that it never happens again.

Combat Path Division:
- In February and March of the 1944 of the year, the soldiers of the Latvian SS division destroyed 138 villages in the Vitebsk region of Belarus, killed 17 thousands of people and hijacked 13 thousands more to Germany.
- Soldiers of the Latvian SS divisions participated in the brutal killings of captured Soviet soldiers, including women.
- The division took direct part in punitive actions against Soviet citizens in the territories of the Leningrad and Novgorod regions. In 1943, units of the division participated in punitive operations against Soviet partisans in the districts of the cities of Nevel, Opochka and Pskov (in 3 km from Pskov, 560 people were shot by them).

In 1942, the Latvian civil administration, in order to help the Wehrmacht, proposed to the German side to create on a voluntary basis armed forces with a total number of 100 thousand people with the condition of recognition of independence after Latvia after the end of the war. Hitler rejected this offer. However, the growing need for manpower forced the Nazi leadership to change their attitude towards participation in the war of the Baltic peoples.

About 30 thousands of Latvian soldiers became prisoners of war of the Western allies, surrendering to them after the surrender of Germany. Latvian organizations managed to convince the allies that Latvian legionaries should be considered as citizens of independent Latvia who were illegally drafted for military service. Therefore, contrary to the protests of the Soviet Union [source not indicated 787 days], they were released and later received permission to emigrate to the United Kingdom, the United States and other Western countries. Many of them served as workers and assistant guards in the armed forces of the United States and Great Britain, stationed in Germany.