Touching the future. "Tsar-engine" RD-171MV and the prospects of space

4 September 2019
65
Now Russian industry is working on a promising RD-171МВ liquid propellant rocket engine. The product with uniquely high characteristics is intended for launch vehicles of the future and will have to provide a qualitative breakthrough in the industry. At the same time, the 2019 year is of particular importance to the program. In the recent past, several key events took place in stories project, and new ones are expected in the coming months. 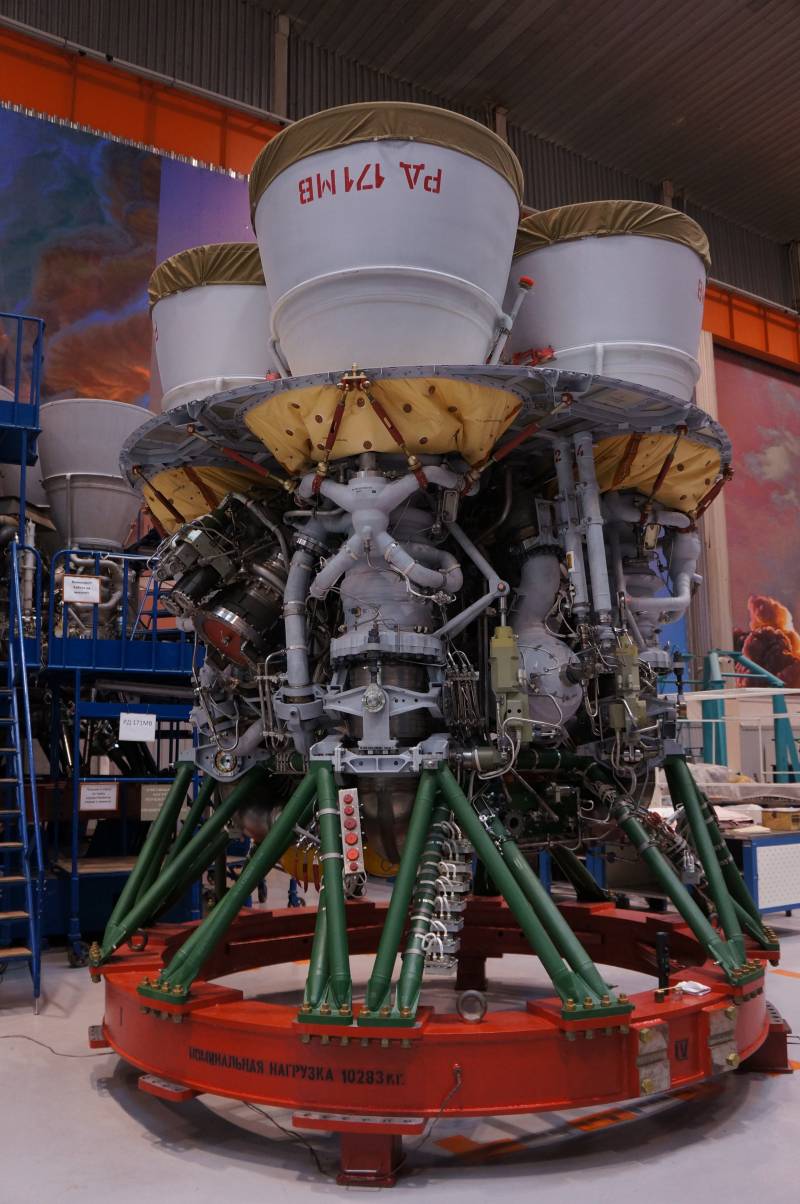 Development work on the RD-171МВ engine has been carried out since 2017. The project developer is NPO Energomash. The existing propulsion system RD-171M was taken as the basis for the new product - an option for the development of the older RD-170 engine. Through the use of proven solutions and new components, it was planned to obtain another record increase in performance. High declared characteristics have already led to the emergence of the nickname "Tsar Engine".

In February 2019, the leadership of Roscosmos announced the completion of the construction of the first experimental RD-171MV. After some preparation, this product will go on fire tests. In July, NPO Energomash spoke about the assembly of three more experimental engines, and also specified the timing of the start of testing the first product. These works are scheduled for the second half of December.

At the end of August, the RD-171MV model, along with other developments, was shown at the MAKS-2019 exhibition. Then it became known that over the next two years the layout of the new engine will be tested with the first stage of the promising Soyuz-5 / Irtysh launch vehicle.

On 1 of September, information appeared about the intention of NPO Energomash to purchase steel products for use in the construction of new engines. In this case, we are talking about "the main production for picking RD-171MV. The total cost of the rental purchased is 19,5 million rubles. All this means that in the near future the program will leave the stage of construction of prototypes and move to a new stage.

At the very end of this year, NPO Energomash will launch tests of the first experimental RD-171MV. In the future, other engines will pass the test. In 2021, the manufacturer will hand over to the subcontractors the first flight set of products for mounting on the Soyuz-5 rocket. At 2022, several launches of such missiles with new propulsion systems are planned at once. Not earlier than the mid-twenties, Soyuz-5 and RD-171MV will be fully operational.

The RD-171MV product is developed on the basis of existing engines and differs from them in a number of components and technologies, which ensures an increase in performance. Also, the new project is interesting in development methods. This is the first engine of NPO Energomash, originally created in electronic form and without the use of paper documentation. 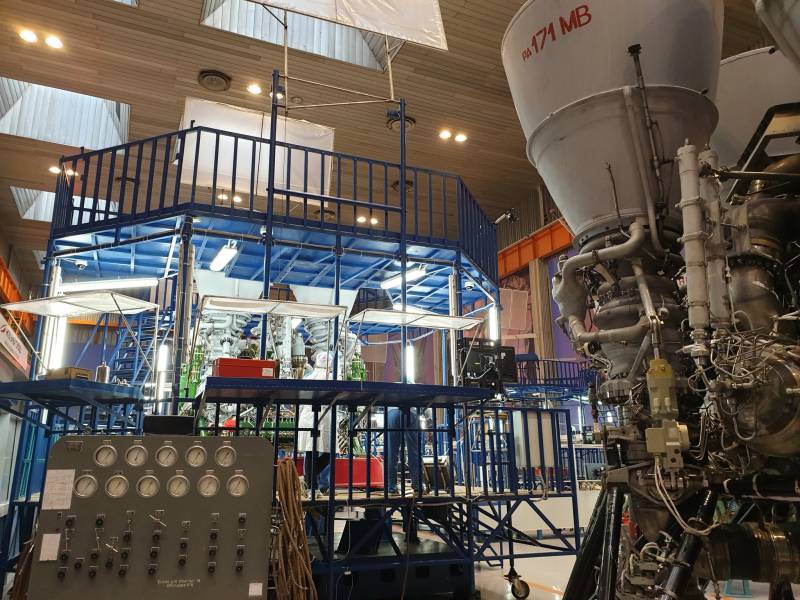 RD-171MV is a four-chamber liquid propellant rocket engine using a kerosene-oxygen fuel pair. With its own weight 10,3 t, the product is capable of developing in the void draft 806 tf. Thermal power - 27 thousand MW. An improved turbopump unit with a capacity of 180 thousand kW was used. Thus, as the developers point out, according to certain characteristics, the new rocket engine is similar to a fairly large power plant. In addition, at the moment it is the most powerful rocket engine in the world.

From the previous products of its family, the new engine differs not only in characteristics, but also in design features. It uses modern materials and technologies. In addition, completely new elements have been introduced, such as a regulatory system borrowed from the RD-191 engine.

The RD-171MV propulsion system is proposed to be used with new launch vehicles capable of effectively using its high characteristics. Work is already underway to create new missiles of various classes specifically for the Tsar Engine.

According to current plans, two promising missiles of different classes are being developed for using the RD-171MV. The potential of the propulsion system can be used in medium and superheavy class launch vehicles. Both samples will have to go into operation no earlier than the second half of the twenties.

Since 2015, the Progress Rocket and Space Center has been developing the new Soyuz-5 medium launch vehicle, also known as the Phoenix and Irtysh. The first stage of such a rocket will be equipped with an RD-171MV installation, while the second is proposed to use other engines. The flight tests of the Irtysh are planned to begin in 2022, and in the middle of the decade it will go into operation.

The estimated starting mass of the new rocket will be 530 t, of which almost 400 t will be fuel and oxidizer for the first stage engine. Irtysh will be able to launch into low Earth orbit up to 17 tons of cargo or 2,5 tons to geostationary. Due to the high characteristics of the first-stage engine, the new launch vehicle will show certain advantages over other products of its class. 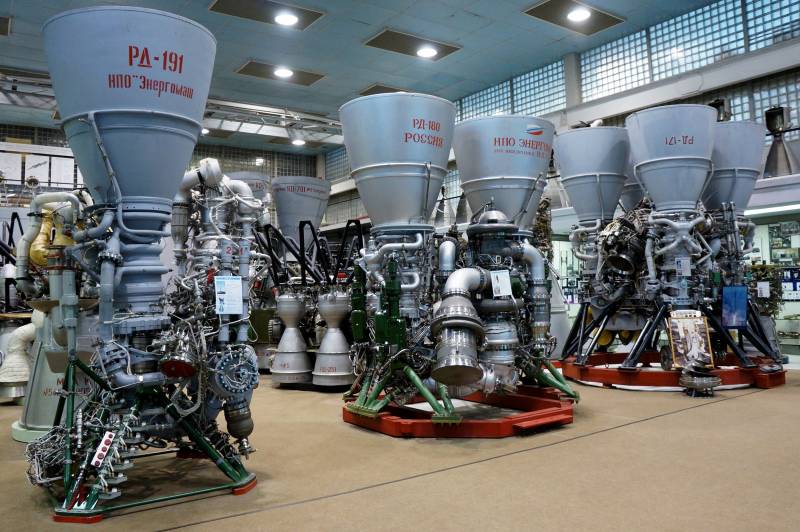 The Irtysh developments will be used in the project of the Yenisei superheavy launch vehicle, created by Energia Corporation. Several architecture options were proposed for such a rocket with common features and components. The first stage of the Yenisei is proposed to be implemented as a package of several stages of the Irtysh with RD-171MV engines. The “Tsar Engine” can also be used in a one-block second stage. The coming years are planned to be used for the design and development of the necessary products. The first flight of the Yenisei will take place tentatively in 2028.

When using the first stage with six RD-171MV engines, the Yenisei rocket will have a mass of more than 3100 t and will be able to carry a load of at least 100 t to the NOO. For GSO, the load will be 25-30 t. A rocket with these characteristics can be used to organize interplanetary missions.

Successful implementation of existing plans will allow us to continue space exploration, both in orbits and other celestial bodies. The promising Irtysh / Soyuz-5 rocket will be able to supplement and replace existing carriers delivering equipment to orbits, and there will be more serious tasks for the Yenisei. Moreover, the success of both projects directly depends on the RD-171MV engine.

Tests of the experienced Tsar Engines will begin this year and will last until 2021-22. Then, such products will be tested with the Irtysh rocket, and in a few years the first samples of the Yenisei are expected to appear. The current work, in fact, lays the foundation for further practical successes.

Thus, in the medium and long term, the Russian space industry will immediately receive several instruments of different classes suitable for solving a wide range of tasks. New carriers will provide promising research programs, as well as strengthen the position in the launch market. The key link in the current plans for the creation of new rocket and space technology is the Tsar Engine - RD-171MV, which has yet to be tested.

We are in Yandex Zen
Rocket Fuel Saga
The real fight for the Russian rocket engine RD-180 unfolded in the USA
65 comments
Information
Dear reader, to leave comments on the publication, you must to register.