The results of the week: Su-57 and fifth-generation ice cream 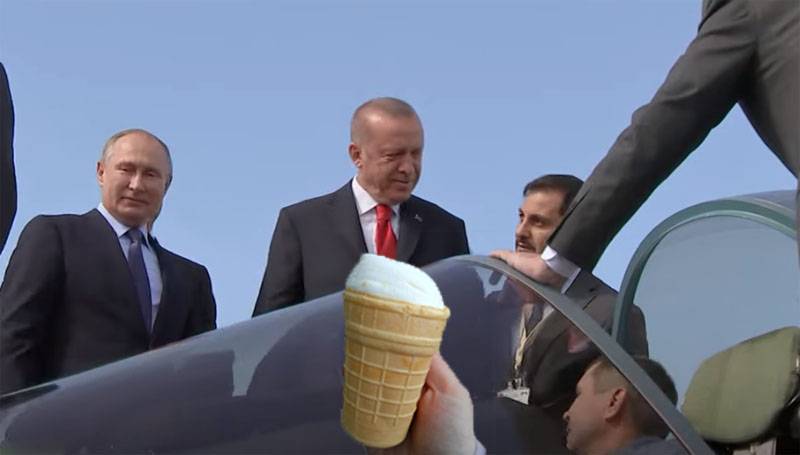 The media in a number of NATO countries show that the authorities reacted rather painfully to the appearance of the President of NATO Turkey at MAX-2019. Recall that the day before Erdogan arrived in Zhukovsky as the head of the Turkish delegation and in a joking manner asked Vladimir Putin whether the Su-57 was flying and whether it was possible to buy this plane. The way the Su-57 flies, Erdogan was shown to Russian pilots. The President of Russia answered Erdogan that you can buy a plane.


On the sidelines of the Weekly Results, it is rumored that Erdogan is ready to purchase not only Su-57, but also a whole tray of Russian ice cream as part of the Final Hit Below the NATO Belt program. And they say that on the same specially developed ice cream of the fifth generation, earlier the Russian special services planted the Chinese chairman, Comrade Xi. And that now, as soon as the sealer is taken out of the refrigerator, he immediately begins to talk about the need to acquire the Su-57 squadron. Chinese experts from SINA and Sohu are in a panic. After all, they know very well that there is no maneuverability and inconspicuous in the world of aircraft than the J-20 ...

When will the Indian authorities buy ice cream from that same saleswoman? ..

People say: Do you want to live, know how to spin!
Vend

NATO is a compulsory organization for the sale of US military goods. Why ... they certainly get nervous. This is the outflow of profit and not small.

parusnik
Judging by the responses of the Western media, Erdogan brought to validol .. Well done, he plays on contradictions ...
Work, Fedya!

The hopes of the ultra-liberal masses for Russia's cosmic failure did not materialize. At the appointed time for the retry, the Soyuz MS-14 spacecraft successfully docked to the International Space Station.

Roscosmos showed the successful docking of the Soyuz MS-14 with a robot on board the ISS
The robot "Fedor", delivered to the ISS, "did not want to" turn on 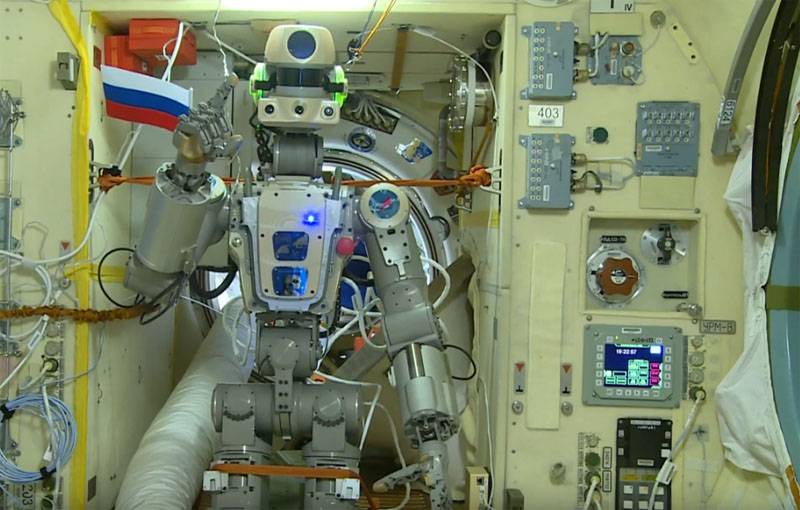 Robot "Fedor", which, although you crack, did not want to dock on the "Soyuz" with the ISS, still docked to the station in manual mode. But, apparently, the cosmobot (aka skybot) is in such a stressful state that it still could not get to work. It would be possible to walk the hammer through the main "nerve" centers of "Fedor", but suddenly it will drive him even deeper into stress. Therefore, the thesis “Urry, where does he have a button?” Still remained relevant - now for the orbit too.

Then came the "revival" of "Fedor." Perhaps warmed with hot cabbage soup from the space diet. "Fedor" turned on and spoke. Yes, as I spoke: I immediately threw it off to congratulate everyone on the Day of Knowledge, and so that I would not run far, I was reliably fixed with orange straps.
In general, work, Fedya!

The ship was manually re-docked with the crew on board, to a node with a faulty proximity system device where Fedya could not dock, after which the union without crew with Fedya on board docked to the vacant node with a working proximity and docking module.
Eugenalt
Here on the home computer usb you will throw into another hole and with a certain probability will not work. Technique, it always presents and will present surprises and surprises. It's great that everything turned out. Success and good luck to the astronauts.
Spartanez300

As if, God forbid, God didn’t begin to establish his orders on the ISS, he’ll suddenly
bulvas
Fedor still cannot come to his senses, after a flight and an unsuccessful docking, and they hammer him

It became known how Poland reacts to the refusal of the US president to come to Warsaw for a ceremony in memory of the outbreak of World War II. If large media outlets come out with neutral notes that “the main reason is the hurricane” (Trump himself stated this), then in the “smaller” publications, as well as in the materials of Polish bloggers, there are notes criticizing Donald Trump 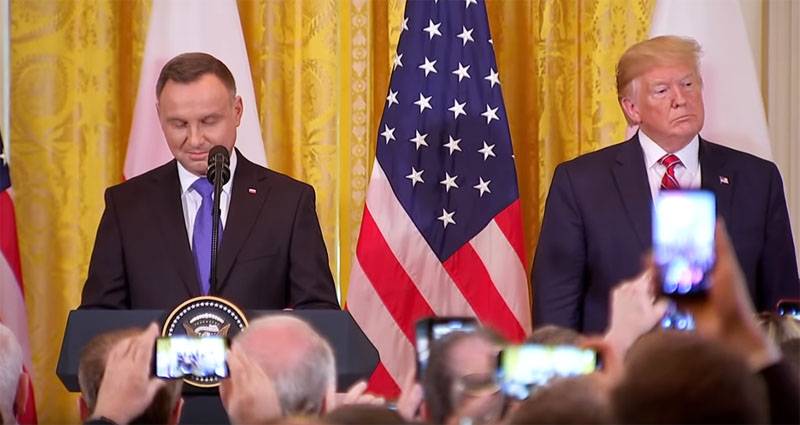 The Polish authorities are gathering peacefully in order to freely reflect on the outbreak of World War II. They say that 80 years ago attacked us. Ay-yai-yay ... The Soviet Union signed a pact with Nazi Germany. Oh no no no. And when they ask the Polish partners, why did your authorities, having signed their pact with Hitler, gave the order to invade Czechoslovakia in 1938, they are silent. Like fish ... And what can they say: they cannot admit to themselves that they actually started the Second World War. That's why they are trying with all their might to erase from the memory of 600 the thousands of Soviet soldiers who have laid down their heads for the liberation of Poland. Polish approach to stories - he is such a.
In such a situation, Trump decided that it was better to refer to the hurricane and stay at home ... The Armenian and Belarusian delegations also decided not to come. In addition, a spoonful of tar for Dude-Kaczynski and Co. was added by their old “friend” Donald Tusk, noting that they were not waiting for him in Warsaw.

History loves to repeat itself. Thrown 80 years ago, "allies" - this is a tragedy. Now the "main ally" has not arrived - a farce. What's next?
Egorovich
In general, a gathering of those who started WWII or indulged and financed.
Shurik70

It is clear that Donald did not go because Donald did not go. But officially, some other reason should be voiced. And then "frivolously treated the guests" - it is somehow frivolous.
What exactly is the essence of "frivolity"? In the menu, mussels along with red wine approved?

The Russian MiG-35 fighter lost a piece of wing skin during a demonstration flight as part of the MAKS-2019 aerospace cabin. This was reported by the American publication The Aviationist, citing its own photojournalists in Zhukovsky near Moscow. 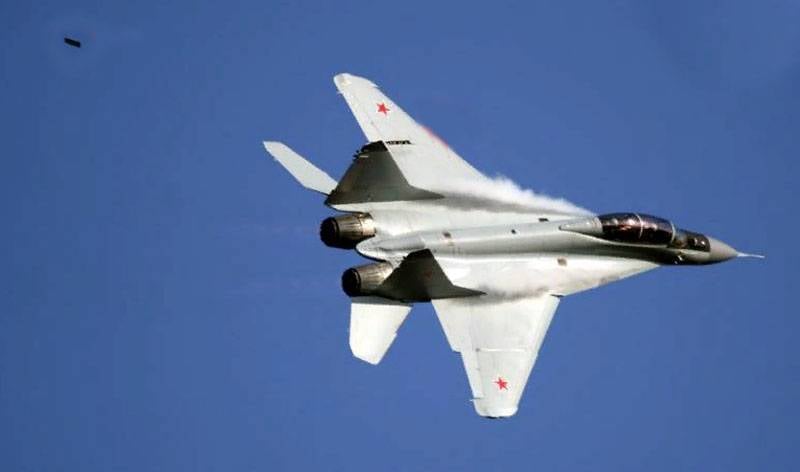 The Aviationist: MiG-35 lost a piece of skin during the flight on the MAX-2019
Confirmed data on the MiG-35 piloting by Indian pilots at the MAX-2019

Finally. The liberal masses got an informational line to spread a smile in the course of the MAKS-2019 International Aerospace Salon. We saw how the MiG-35 lost a fragment of the skin in flight. What started! .. The most harmless pearls from liberal "friends of Russia": "Yes, they can’t even use a screwdriver and wrench to prevent the plane from falling in flight." When the “friends” were reminded that just recently the F-35 had lost its hatch in flight, immediately a new pearl: “But there’s nothing to look at the Americans!” Of course, there’s nothing ... They don’t have a half-plane in flight, it’s okay, it will be within the framework of a world-conquering democracy, and any similar episode in Russia will be revelations about the “hand-making ...” of the producer.

Or maybe someone drilled something there again ... Or the Indian pilot decided to “ventilate the cabin”.

kjhg
Ours did the right thing to let the Indian pilot fly. It is necessary to do everything possible so that India purchases Mig-35. His Air Force does not particularly need it, but a large export order will breathe new life into the renowned Mig Aircraft Corporation. Today, in the absence of orders, it really bends. We need a lot of money to carry out the re-equipment of the enterprise. Without this, there can be no talk of any real work on a promising light fighter and a promising interceptor.
Aristarkh Lyudvigovich

It's okay, it happens, the working moment. Here, for example, is a photograph of an F-35 fighter with a technological hatch torn off in flight on board the fuselage. 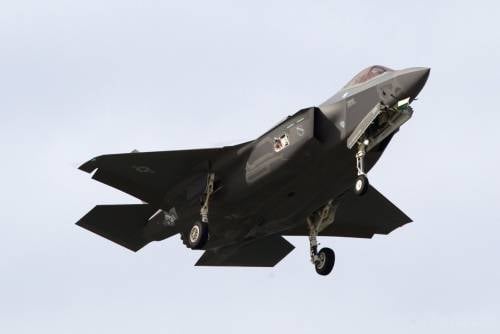 Captain Pushkin
Americans are cool guys. From their Boeing repeatedly some details in flight fell off. And nothing, no panic. Just think, something fell off at the best airplane in the world. What is there to discuss? And so everything is clear.

The Verkhovna Rada of friends Zelensky

Today Stepan Poltorak officially resigned as Minister of Defense of Ukraine. The Verkhovna Rada of the new convocation approved the new head of the military department "independent."

The week finally brought together a new composition of the Ukrainian parliament. Well, the very one who is “radically different” and “will not allow himself what the previous convocation of the Armed Forces of Ukraine allowed”. Complete, you know, the fight against corruption and nepotism. And it was precisely in the framework of this struggle that the classmates approved by the Verkhovna Rada of Zelensky, classmates, neighbors, drinking buddies ... er, ex-colleagues of the Quarter and other specialists, began to come to the supreme power. Democracy in Ukraine wins. Those who are small Russophobia on Facebook, now - people's deputies. Well, now this country will succeed ... 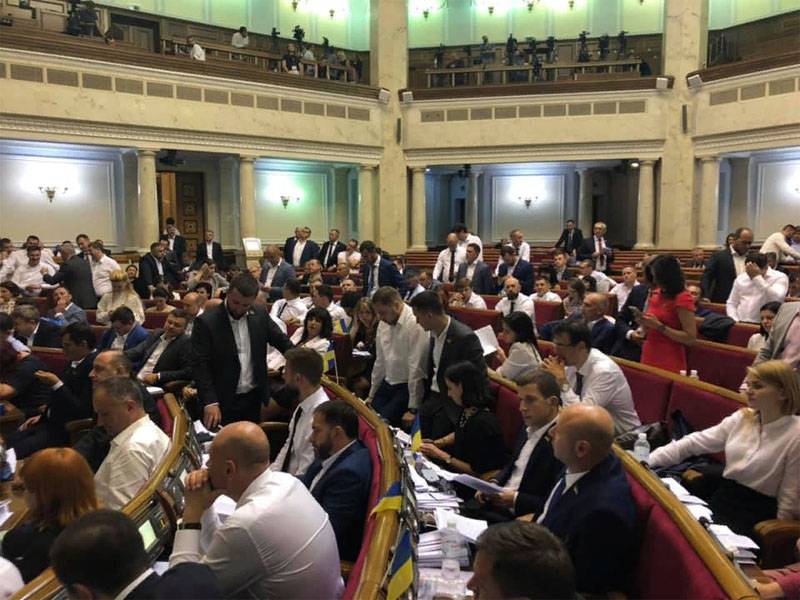 "holds university degrees from Warwick and Oxford"
Everything is clear ...
"will continue to transfer the Ukrainian army to" real NATO standards. "
Who would doubt that.
Dietmar

Now they have "Taburetkin" appeared. Navy put the tankman in command, now a clear upgrade!
In short, "freaked out the kids for the milk ..."
WILL

It’s easy to identify Ukrainian shepherds ... by sparkling jokes, contagious laughter and the desire to speak in public!