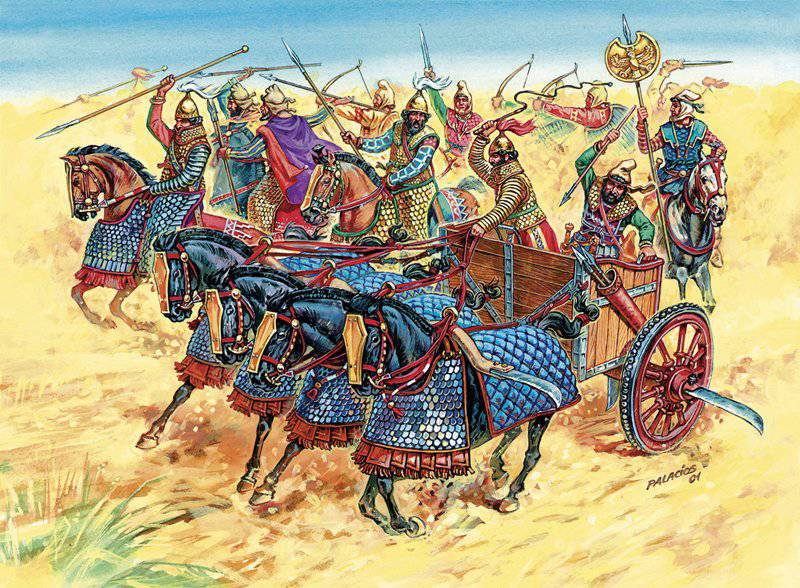 War chariots ... They were used in large numbers in the countries of the Ancient World, in particular, the Ancient East - in Egypt, Assyria, Persia, Rome, Greece. Warriors on such chariots were special units that stood in front or on the flanks of the infantry. The main task of such detachments was the disorganization of the enemy troops in order to further defeat them with cavalry and infantry. And very often it was by the number of chariots that the power of the army was judged in general.

According to modern historians, the first chariots were built in 2300 BC in the territory of Mesopotamia, but no documentary evidence of these guesses exists. In addition, if you carefully consider the preserved bas-reliefs, you get the impression that in the first carriages not horses were harnessed at all, but rather donkeys. Such an assumption has the right to life, since the first horses, which were similar to the modern ones, appeared only in the second millennium BC. Already Assyrian and Egyptian warriors used horses in their chariots, their height was about 160 centimeters, and their weight was about 500 kilograms.

Over time, the chariot improved, there were new types of them. Soon war charters and freighters appeared. According to some historians, in addition to chariots, there were actually carts, but they were invented not only in Mesopotamia, but also in the Caucasus. But it should be noted that both the design and the names of the parts and parts were identical, which gives the right to assume that the center of their creation was the same.

As for the technology of the construction of chariots, it is constantly evolving. And if the first chariots, which appeared in Mesopotamia, were very bulky and heavy platforms, on which archers or throwers of darts were placed, in Egypt, for example, light wagons with high maneuverability were used, which were used not only for shooters, but also themselves were serious weapons.

In the ancient world, the construction of chariots was given great importance. This is evidenced, for example, by the fact that such types of wood as birch, elm, pine and ash were used for their manufacture in Egypt. But such trees do not grow in this area, and delivering them at that time was considered not an easy task.

In addition, in some localities, chariots were made to order. So, archaeologists have discovered a large number of chariots on the island of Crete (near 500 chariots). But if you carefully study the relief of the island, it becomes clear that using such a vehicle in the conditions of mountainous terrain is impossible. Therefore, according to the assumption of the German scientist G. Bokish, carts from Crete were exported to other states.

It is necessary to emphasize that the invention of chariots created a real sensation in military affairs. In fact, they became the basis of a large number of armies, while deciding the outcome of not only individual battles and battles. The fate of entire states depended on them.

Several types of chariots were known: with two wheels with one or two horses in a harness, with two or four wheels and four horses in a harness. The chariots of the ancient Greeks differed in that their body was located on low wheels. In front of the railing were located to secure the reins. The back of the carts was open. This made it possible for soldiers to drop in and jump off on the move. Such a chariot was called a Trojan. There was also a complex chariot, which was called Persian. It was much larger in size, with railings attached to each side, knives attached to the axles, and spears to the drawbar. 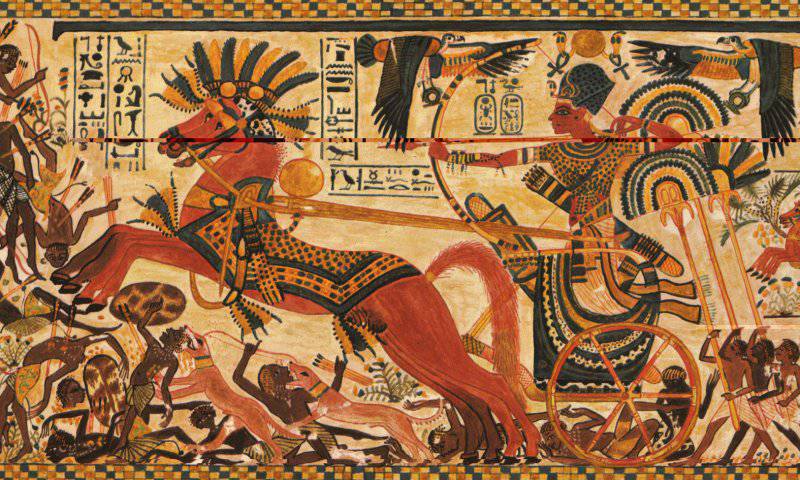 The most widespread use of chariots was in Egypt and the Hittite kingdom, which were in a state of constant war with each other, so they were forced to constantly improve their military power. And then, finally, came the decisive moment in their confrontation. According to some data, the decisive battle took place in the 1296 year, on the other - in 1312 BC.

By this time, at the disposal of both states were powerful armies, as well as improved types of war chariots. They played a crucial role in the outcome of the battle. The battle of Kadesh was the first battle, the course of which can be traced to the smallest details thanks to the records of the chronicler Ramses II, and also to see what role the chariots played.

The forces in both armies were about the same - by 20 thousands of soldiers and about two and a half thousand chariots on each side. They joined forces on 10, 30 and 50 chariots. The improvement of the wagons was that the wheels had already used 8 knitting needles, and the length of the axle that protruded along the edges of the wheels was significantly increased, and it was a long, sharp knife that was a formidable weapon, especially in relation to enemy infantry. Similar knives were attached to the front of the chariot. The chariot driver was driving, and a warrior from a noble family was standing near him.

And now it does not matter who won the battle, scientists are inclined to think that it ended in a draw, because later the rulers of the two states signed a non-aggression pact and provide assistance if necessary. The main thing is what role the chariots played, and how further their improvement took place. After some time, they were driven not by two, but by four, six horses. In addition, they turned into a serpent.

Historical chariots, according to historians, appeared around 479-401 BC. Their main task, in contrast to simple war chariots, was to exert a psychological effect on the enemy’s infantry during a frontal attack on defeat. It is clear that the new type of carts required the creation of a new type of troops, in which the soldiers would be fearless, were not afraid to go into direct confrontation with the enemy, even without the support of their troops.

For the first time serponosnye quadriga were used in the battle of Kunaks, which occurred between the contenders for the throne of the Achaemenid Empire by King Artaxerxes II and his brother Cyrus the Younger. It is based on the descriptions of this battle, you can imagine what this chariot looked like. She had large wheels that rotated around an axis, the length of which was designed for 4 horses. Sickles with a length of about 90 centimeters were attached to each axis. In addition, two vertical sickles were attached to the bottom of the axis.

In the future, serponosnye quadriga were used already in the battle of Daskeliok between the Persians and Greeks in 395 BC, and also in the battle of Gaugamela between Alexander the Great and Darius III.

But it should be noted that such chariots were not universal enough in battles, because they demanded a flat surface. And, in fact, they played more the role of psychological weapons, since the real losses from the use of serponosnyh quadrigs were insignificant.

Therefore, it is not surprising that over time, war chariots began to be used less and less in battles, and later they completely disappeared from the battle formations.