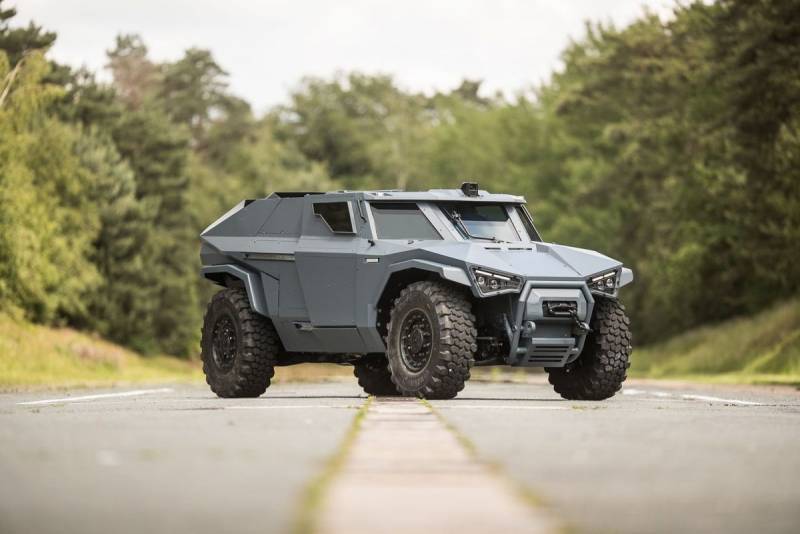 The manufacturer of the new armored car for the French army is Arquus. This is a new brand of the company with many years history Renault Trucks Defense. The company name changed only in the 2018 year. It is under this brand that French military products of the Acmat and Panhard brands are produced today. The new Arquus brand was formed by combining two Latin words: arma (weapon) and equus (horse), thus Arquus symbolizes the “war horse”. Given that the company is developing military wheeled vehicles and wheeled armored vehicles, the name is quite relevant. At the same time, Arquus remains one of the main partners of the French armed forces with more than 100-year history and experience in creating wheeled military equipment.

"Scarab" and its prospects in the market

The new Arquus armored car, which is offered by the French military as well as for export, received its own name Scarabee. At the same time, the military did not rush to buy an armored car developed by French designers. It is assumed that in the French army the novelty will be able to replace light armored vehicles of the Panhard VBL family no earlier than 2025 of the year. This has already been officially announced, but over the next six years, much can change. It is worth noting that the Panhard VBL armored vehicles with the 4x4 wheel formula were developed by the French company Panhard General Defense in the middle of the 1980's. The car turned out to be quite successful, in all more than 2300 units were produced, of which approximately 1500 were in service with the French army, the rest went for export.

It is known that the client, configured to receive new Arquus armored vehicles, is still one. At the same time, the company is working to find for its new products and foreign customers. There is a possibility that even before the start of deliveries to the French armed forces, the hybrid armored car will go to some other country. For the first time in public, a new French armored car was demonstrated in June 2018 of the year. The debut took place at the international defense exhibition Eurosatory 2018. At the exhibition, Arquus presented for the first time the data on the new development by presenting the light wheeled armored car Arquus Scarabee with the wheel formula 4x4. Then it became known that the new armored vehicle has already entered the stage of factory tests, and a prototype has also been built. 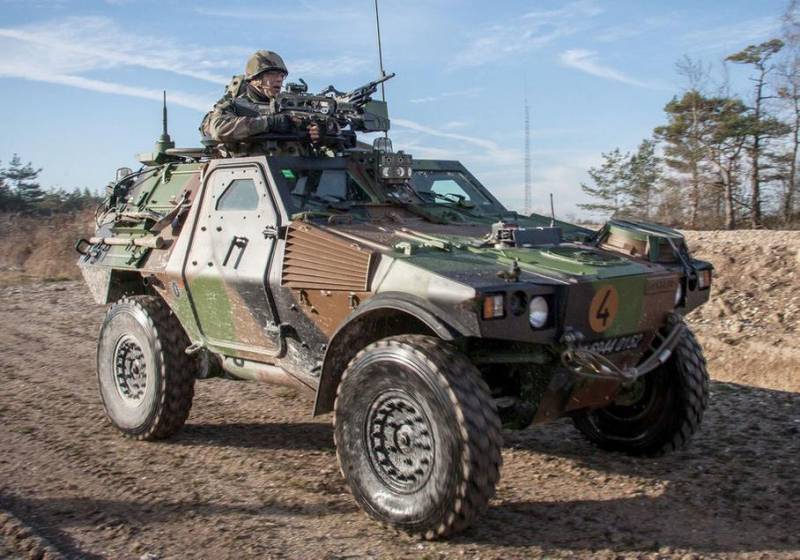 Since the debut of the new combat vehicle took place only last year, it is difficult to seriously discuss the export potential of the new product. But given the number of innovative solutions implemented by designers in the armored car, the relatively low cost of such armored vehicles and the rich French experience in creating armored vehicles, it can be assumed that the car will find its buyer outside of France. Especially, taking into account the history of French wheeled vehicles, which have been successfully exported to other countries. An armored car can find buyers in the market of Eastern Europe, North Africa, the Middle East and other regions of the world. It is expected that the armored car will be of interest primarily to developing countries.

A feature of the new items are unique technical innovations, which include a hybrid power plant, as well as the controllability of all four wheels. According to the assurances of the developers, the new light armored car will be able to move sideways, which significantly expands the possibilities of its combat use and increases survivability on the battlefield. According to the creators, the new Arquus Scarabee is designed to overcome even severe off-road conditions and is able to carry heavy loads, solving many military tasks.

But the first and most important feature of the car is a hybrid powerplant, which includes a powerful 300-strong diesel engine and an electric motor with power up to 150 hp. Such an installation not only increases the environmental friendliness of the machine, but also increases the mileage, and if necessary it can also be used to solve specific military tasks. For example, if necessary, the driver can switch to an electric motor, which will make the car almost silent. This mode of operation is perfect for reconnaissance missions. In this mode, the Arquus Scarabee armored vehicles are approaching you only by the noise of the rubber in contact with the road surface. 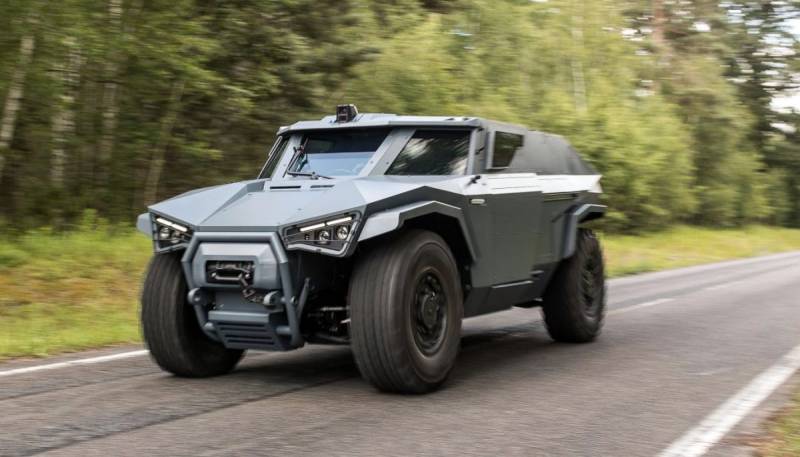 An important feature of the armored car is that the power plant moved to the stern of the car. And in a traditional place in the front, under the hood, there is a roomy luggage compartment. The use of composite armor and a monocoque-style hull allowed the developers of the armored car to keep in 6,6 tons, according to other sources, the combat weight of the armored car does not exceed 8 tons. It is also known that the load capacity of new items is estimated at approximately 1800 kg. At the same time, the booking class and the security provided to the crew are not yet known.

Arquus Scarabee hull features also include the location of the driver’s seat strictly in the center of the combat vehicle. The driver has at his disposal a three-section windshield, which is located in a "semicircle". Another feature of the new items are sliding, rather than swing doors, as in the vast majority of modern cars. The developers claim that this solution has improved ergonomics and simplifies the process of boarding / disembarking the crew from the car. True, experts note that such a design may have its drawbacks. If the guides are deformed by impact, explosion or any debris, the door may jam. Like its predecessor, the Panhard VBL, the Scarab is designed to carry four people, including the driver. Seats for three fighters are located behind the driver's seat. It is known that the car received a modern digital dashboard and all-round cameras, which allows the driver to always know what is happening around the car.

The armored car is a classic SUV with the wheel formula 4x4. The car received quite large 20-inch tires 365 / 80 R 20 with a developed tread pattern, which facilitate the movement of the car on the road. In addition, a thruster rear suspension is a unique solution. The driver can control not only the front wheels, but also the rear ones. This allows, if necessary, to move sideways, as well as in any way that the driver considers necessary. This decision affects both the maneuverability and survival of the vehicle in battle, as well as cross-country ability, making it possible to overcome even serious off-road conditions. 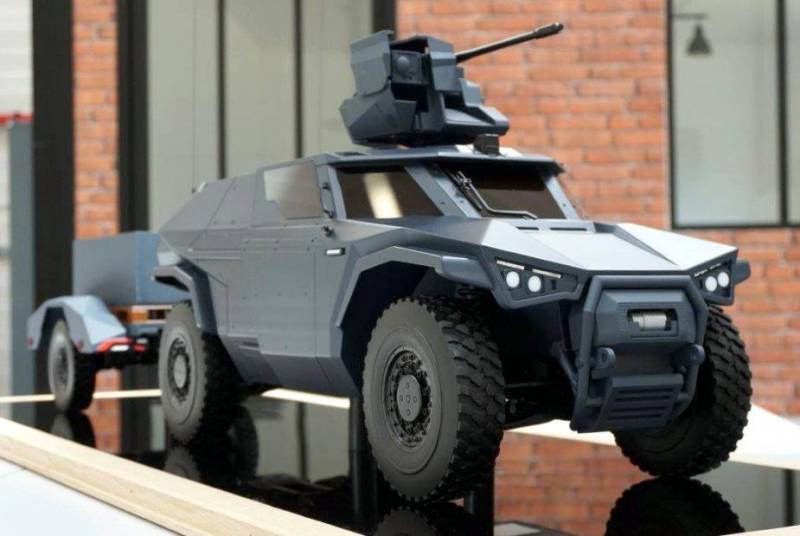 French Beetle may get weapons

Obviously, the new light wheeled armored car will be able to perform not only transport functions, transporting soldiers and goods from place to place. The machine can be used for reconnaissance and patrolling the area, escorting columns. For this reason, the Arquus Scarabee armored car can be equipped with various weapons. One of the options for arming an armored car has already been demonstrated at exhibitions.

This provides for the location on the roof of an armored car of a light remote-controlled combat module Hornet 30, equipped with a quick-firing 30-mm automatic gun. The presence of an 30-mm automatic gun equals the fire capabilities of a small wheeled armored vehicle with some infantry fighting vehicles, for example, the most massive BMP-2 in the Russian army. Obviously, if necessary, other options for arming the machine will be presented, including conventional and heavy machine guns, automatic grenade launchers or modern ATGMs at the request of the customer.