August 30 2019
8
The Ministry of Defense of Thailand received from the United States the first four M1126 Stryker ICV armored personnel carriers with the 8x8 wheel formula for the Thai army. The APCs were delivered on August 29 by two heavy military transport aircraft, the Boeing C-17A Globemaser III of the United States Air Force. 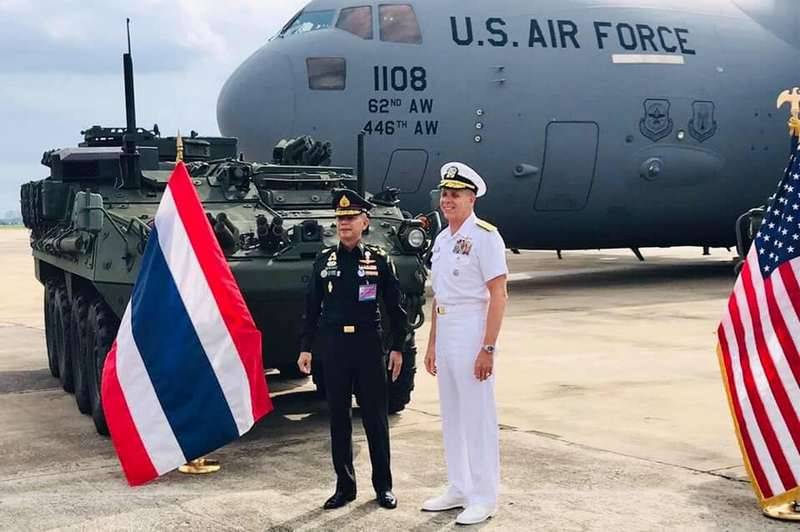 The United States solemnly handed over to the Thai army the first four M1126 Stryker ICV armored personnel carriers with the 8x8 wheel formula. The ceremony was attended by the Commander-in-Chief of the Land Forces of Thailand, General Afirat Kongsompong, and the Commander of the United States Command in the Indo-Pacific Region, Admiral Phil Davidson.

As previously reported, the entire US Department of Defense is preparing to supply Thailand with 120 Stryker wheeled armored personnel carriers through the US Foreign Military Sales (FMS) US program of intergovernmental foreign military sales. Of these, 70 will be delivered this year, with Thailand paying only 47 vehicles, and 23 armored personnel carriers will be delivered in military aid. In the 2020 year, another 50 Stryker should be delivered, of which ten were paid by Thailand and 40 again in order of assistance.

The supply of armored personnel carriers is approved by the State Department and the US Congress. Thailand was the first foreign country to receive the Stryker in service.