War is war and dinner is on schedule

7 September 2019
17
We continue to consider the contentment of the infantry regiment of the Russian army of the First World War in battle (see Lunch under the fire) and end the cycle The regiment's contentment in the war. 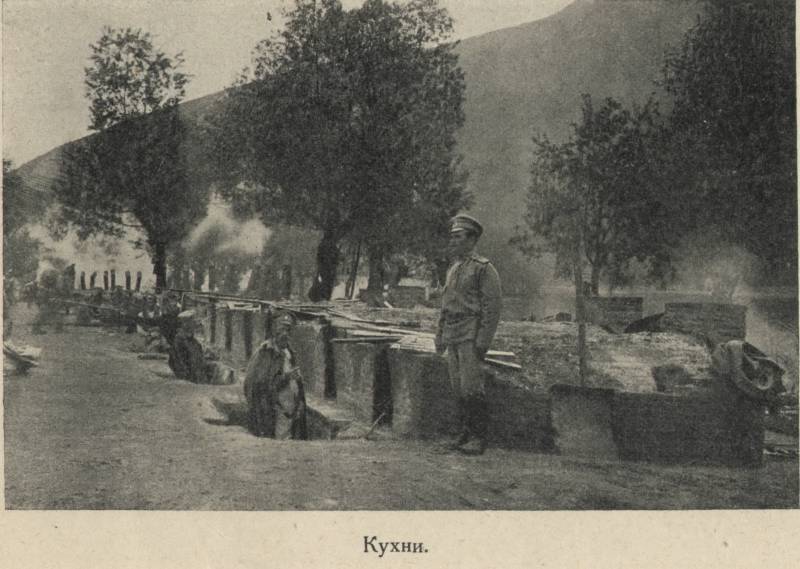 During the offensive between Darkeman and Friedland, after a fairly significant transition, the soldiers settled down for the night in a bivvy apartment in some estate, the owner of which stayed at home and kindly placed at the disposal of the Russians his entire estate with outbuildings and a large park. The companies were located partly under the roofs, and partly in the park, pitching tents. The convoy of the 1st category was dragged into the manor’s yard and, if possible, sheltered under the trees and along the walls - after all, a German airplane was flying in the evening, and one could expect some tricks at night. Dinner was already ready, but people were somewhat reluctant to go to their camp kitchens, preferring to relax after a difficult transition, and some “dabbled” with a seagull - so almost half of the slurry had to be poured into a river flowing nearby.

At night, it turned out that the next day's performance was scheduled not at 8 hours, as previously assumed, but at 6, since the regiment was to be at the forefront.

Category II convoys traveling in a common divisional convoy were stuck somewhere in a mountainous region north of Darkeman (due to the crossing of columns), and thus they could not be counted on for their timely arrival. The manager, who had arrived for the night, immediately sent for reconnaissance in all directions to artisans and other business officials.

Finding food at night is not easy, but still managed to get the necessary. It turned out that the landowner had a cow, potatoes and onions, bought two bulls in a neighboring village, got pepper and salt (although these products were in the carts, which, one per battalion, were always in the kitchens to transport products from the convoy II category at once for several days), and one of the companies somehow managed to buy even white bread - and a rather decent amount. Immediately, work began to boil: behind the outskirts near the river, the purchased cattle were beaten, skin was stripped from it, they were gutted and chopped; near the kitchens were peeling potatoes and cutting meat into smaller pieces. By the time of the performance, the products were put into the boilers of the camp kitchens, and at 12 hours the fighters ate potato soup with chopped meat on a large halt. True, people at the kitchens had to spend the whole night, but in the war they did not take this into account. 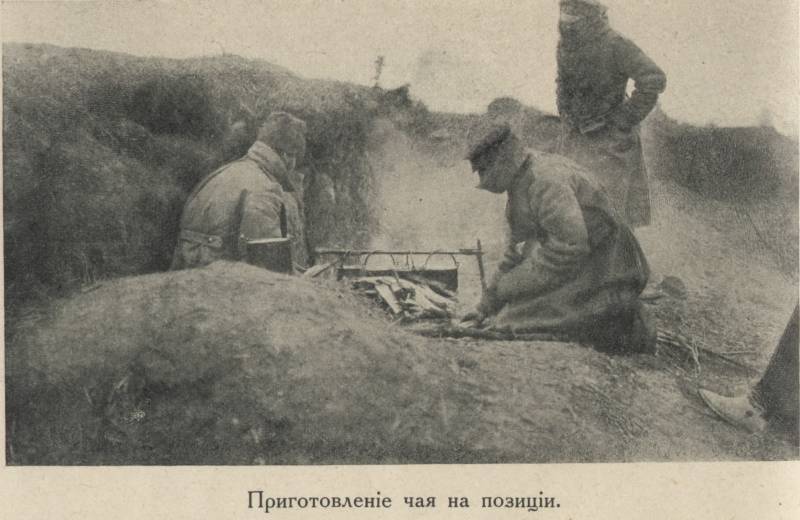 It should be noted that for the entire time of the maneuver war that V. Panov’s regiment had to wage in East Prussia, the food issue, if aggravated, was exclusively in relation to bread. The rest of the products were always in abundance, since this region was not without reason known as the breadbasket of Germany - all that was needed was to be able to find the products and persuade the Germans to sell them for Russian money, which, of course, was not easy, but still, with certain inventiveness and energy , possibly. The organization of the regiment's allowance during the indicated period of military operations was built according to the authorized stencil, but, as noted earlier, depending on the current situation, it was modified by the nearest authorities.

The order of contentment in the regiment was as follows. There were 4 camp kitchens for each battalion, and another 1 camp kitchen was intended for a non-combat company. The officers had a separate kitchen of a special system, but for the most part it was used only by the regiment headquarters, as the combat officers, being at a more or less significant distance from the headquarters, were content from the company kitchens with their soldiers. In addition, in every battalion there was a boiler for making tea and cooled boiled water. These boilers always moved for battalions. Company kitchens were concentrated in the first-class train and at the set distance (200 - 300 steps) they moved directly behind the regiment, and during long stops, for an overnight stay or rest, they were pulled to some kind of cover (forest, grove, village courtyards, etc.). ), where distribution took place, as well as cooking.

Each of the companies took turns in contenting their battalion for a month, serving their own kitchen apparatus. Domestic pair wagons and gigs (both of them in 1 per company), philistine carts as needed, as well as portioned cattle, if any, were in a train of the second category, which (as the situation allowed) or moved at a distance of half regiment, or went as part of a convoy column of the division (in the latter case, joining its regiment for the night). 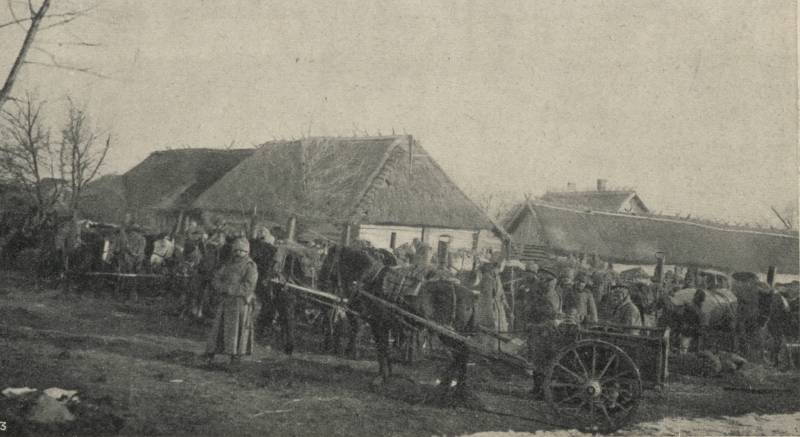 Food for the mouth was received daily (usually overnight) by artisans contenting the mouth. Companies received food from a convoy of the second category, and the latter received it from the quartermaster's corps or division institutions. At the end of each day, sergeants who were content with companies gathered information on the number of people in the companies, and based on them, the regimental quartermaster was written out a demand for food - separately for each battalion. After the arrival of a convoy of the II category to the regiment’s location, a place for slaughtering cattle was immediately chosen, preferably near the water and always outside the village. Cattle fought in the required quantity by specially appointed people who knew this business. After the slaughter, the skin was removed and carcasses were cut, parts of the carcasses were washed and handed out to the companies, the entrails were buried in the ground, and the skin was greased, folded in a special way and at the very first opportunity surrendered to the quartermaster's warehouse. The last rule, however, was rarely observed during the war, partly due to lack of time, and mainly due to the lack of sufficient salt (especially at the beginning of the war). Thus, the mass of skins disappeared, since they, along with the insides, were simply buried in the ground, and sometimes they were simply left in the place of cattle slaughter. More or less, business with salting of leathers was adjusted only during the period of the established positional war and only then, approximately, by the end of the 1916 of the year. 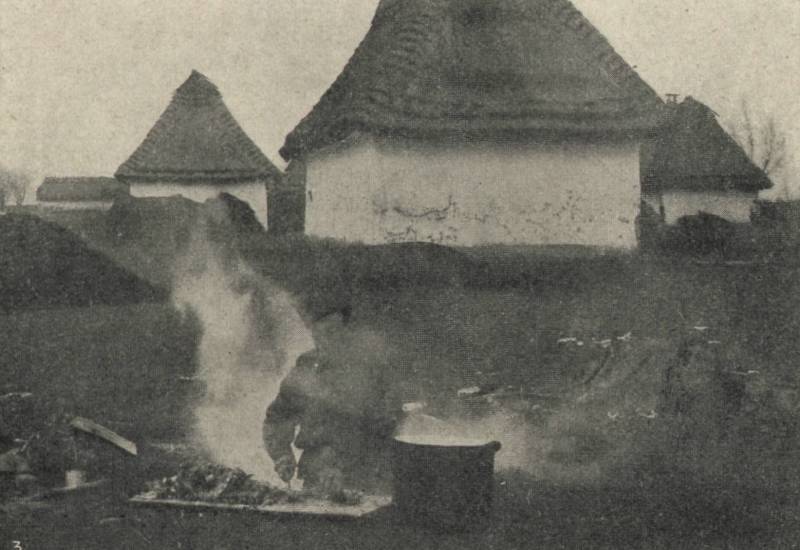 Having handed out supper, artisans of contented mouths arrived in the convoy of the II category, taking products for bookmarking in camp kitchens, and, in addition, replenished the stocks of flavoring products and tea allowances transported during the convoy of I category on the cart. As a rule, boilers were washed and filled with water in the companies' mouths, as well as firewood was prepared. 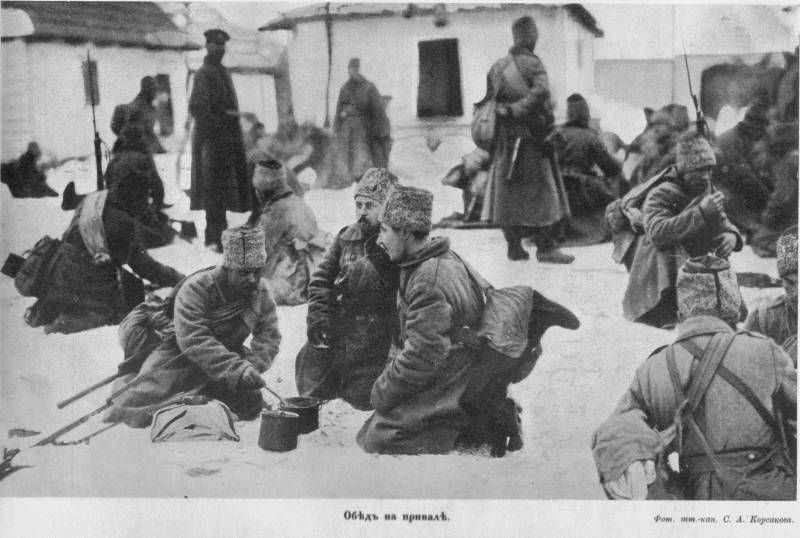 About an hour before 3, from the overnight stay of the regiment near the kitchens, work was already beginning on preparing the products received the day before for laying in boilers (peeling potatoes, chopping meat into pieces, rinsing cereals, etc.), as well as preparing boiling water for morning tea, which was supposed to be ready no later than an hour before the performance. And then it was distributed to the fighters in camp pots - for this, each department sent people with several pots to the 2-3 boilers (depending on the number of people who wanted to drink tea).

At the same time, soldiers fill the camping flasks with boiling water - in order to drink while moving. As practice has shown, this water, especially on hot days, was not enough, because people on a campaign drink a lot and the 1 boiler was not able to satisfy the battalion (besides, the water in it did not have time to cool down and was still hot). And therefore it was impossible by any means to stop people from drinking raw water from wells, rivers, and sometimes swamps that come in the way. Seeing the water, almost the entire regiment ran off the road, and people literally stick to the shore, drink with incredible greed and immediately collect water in their flasks. This phenomenon is spontaneous, and there was no way to deal with it, since boiled cooled water was not enough even for half a day. 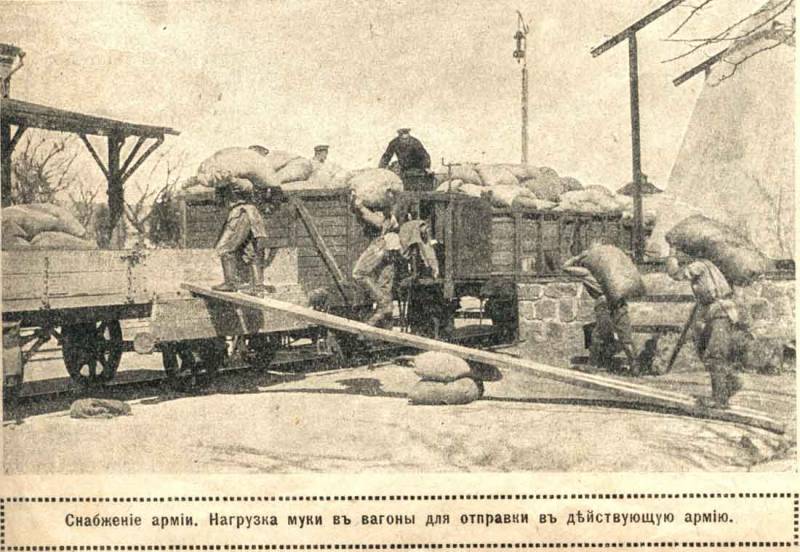 These are the peculiarities of the food allowance of the Russian army infantry regiment in the year of the First World War — moreover, through the eyes of a direct participant and organizer of the process.

Author:
Oleynikov Alexey
Articles from this series:
Lunch under the fire
The regiment's contentment in the war