Organization and tactics of the tank forces of the Great War

14 September 2019
8
End the conversation about the features of the application tanks during the First World War (see The triumph of allied tanks). 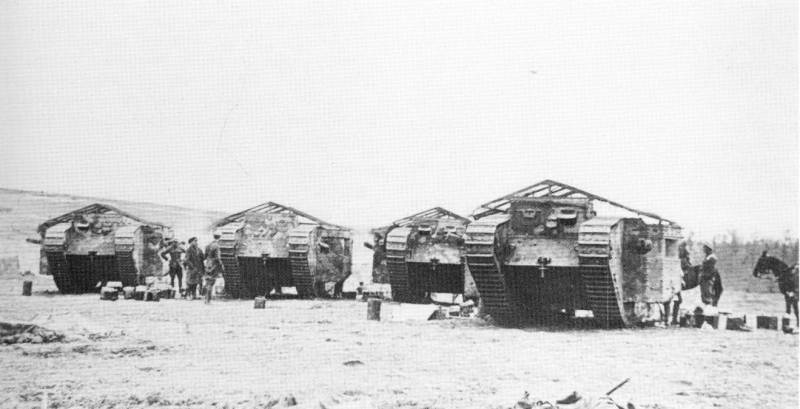 4 tank MK-I company C before the battle of Fleury

And now take a quick look at tank tactics.

During the years of the war, the following guiding tactical principles were developed:

1. A heavy tank should pave the way for the infantry; the task of a light tank is to fight in close contact with the infantry.

3. Accurate statement of tasks for tanks and systematic interaction with infantry following vehicles at a distance of several hundred meters or directly in one formation should be provided. 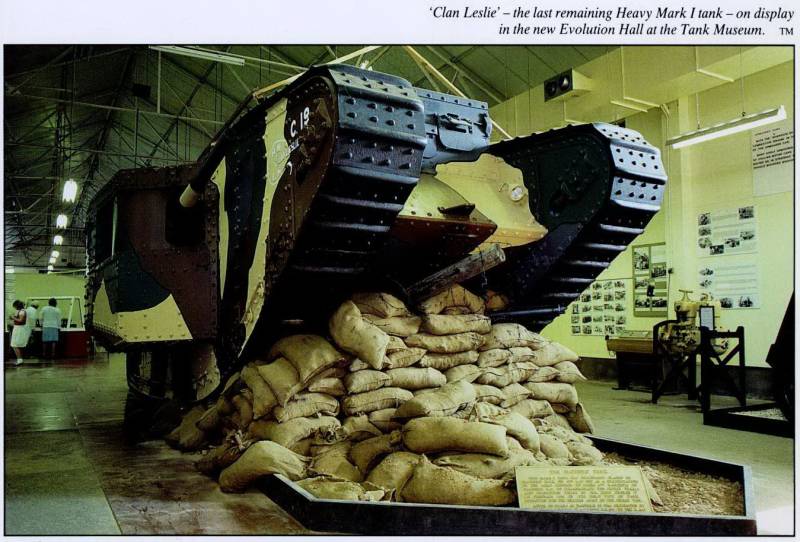 4. Rail delivery of tanks, the approach of the latter to the starting line before the attack and the deployment of a tank group should pass unnoticed by the enemy.

5. No preliminary artillery preparation - artillery fire should open simultaneously with the infantry attack.

6. Providing support for the advance of tanks from the starting line to the first enemy position with artillery fire or other means.

7. The massive use of tanks requires a significant number of vehicles in the first wave of the offensive, as well as a sufficient depth of battle formation and ample reserves. 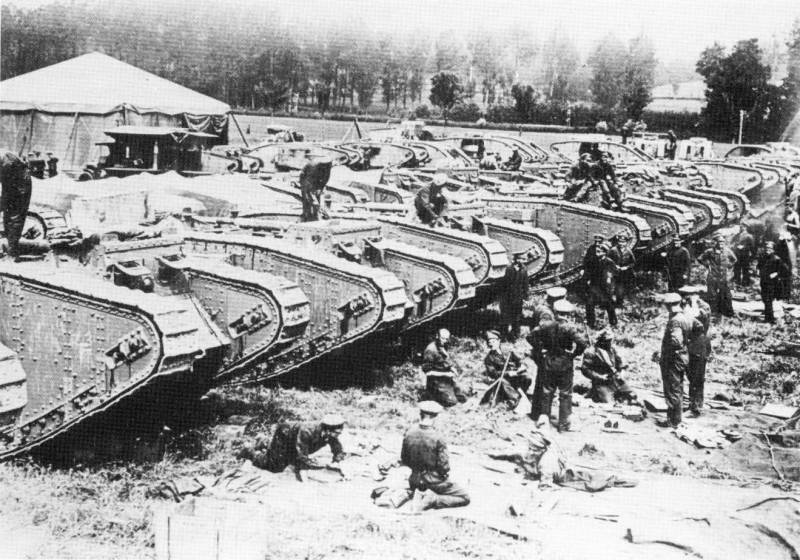 British crews at their cars. One of the "tankodromes" of the Western Front

10. Mandatory fire at enemy observation posts - on the greatest possible length of the front line.

11. Tanks should provide each other mutual support.

12. The communication of fighting tanks with neighbors and with the rear is provided by communication tanks, a wireless telegraph, signal disks, carrier pigeons and other means. 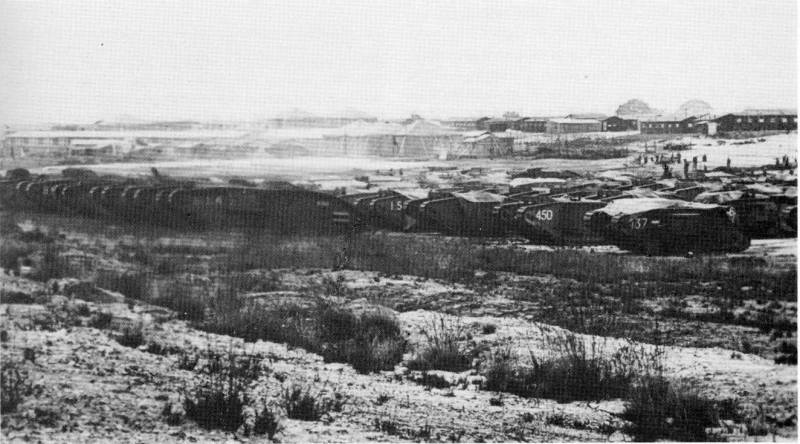 13. A good observational system is needed (especially for the commander): viewing slots, (lockable) armored shutters, a system of mirrors, periscopes.

Let us now look at the organization of armored forces.

The British War Department ordered about 1916 tanks at the beginning of 150. After the first experiment in the fall of 1916, about 1917 units were ordered for 1100, then in 1918 year - initially 1350 units. At a meeting of the English Ministry of War in early March 1918, in the presence of the Chief of the General Staff Wilson, the following facts were reported: 12 tank detachments at the front in 15 km were brought into action near Messiny - in two days they went deep into enemy defenses at 3,6 km at loss of 16000 people accompanying their infantry; in battles near Cambrai, the 7 tank detachments at the front with a width of 12 km won a plot in 8,2 km depth in two days with the loss of infantry in 9500 people. Based on such as the document noted "excellent" results, the initial order for 1350 tanks was increased to 5000 units. 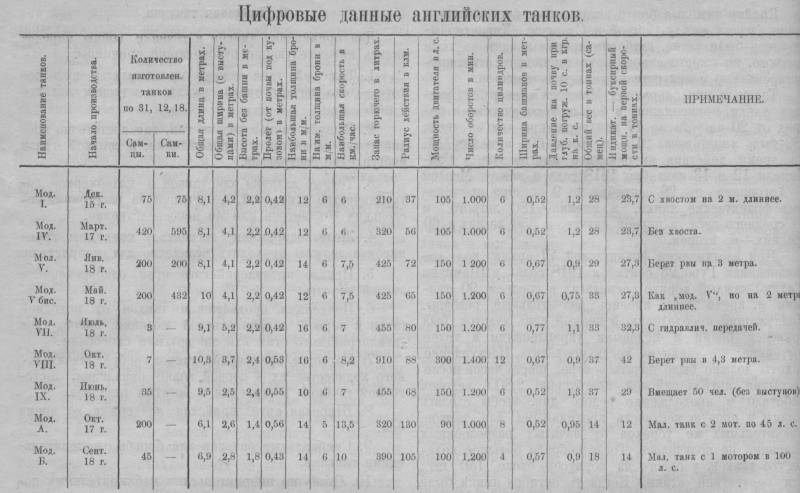 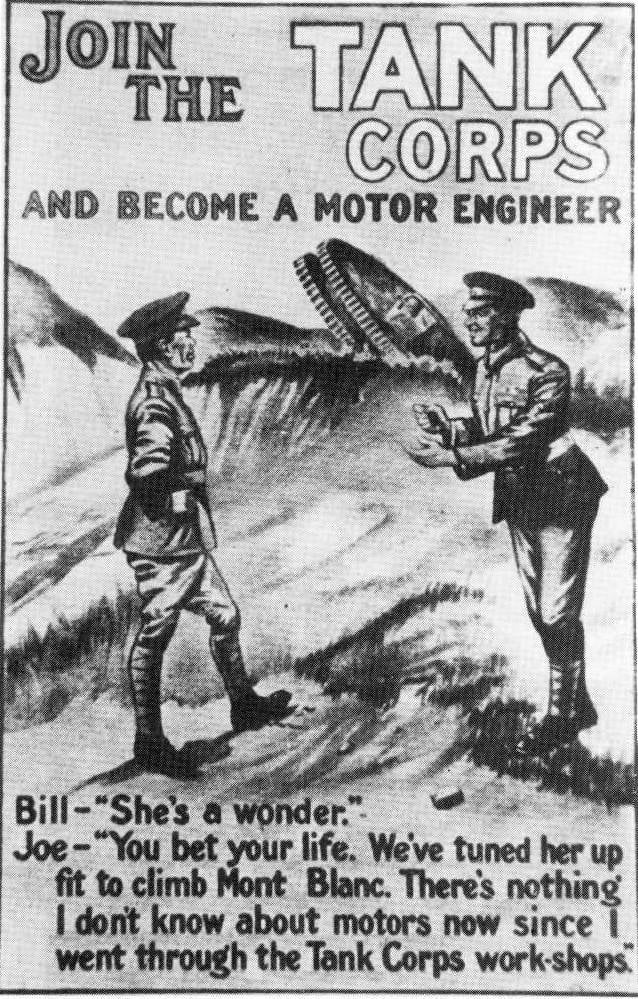 The first 6 tank companies became part of the Machine Gun Corps. At the end of 1916 - beginning of 1917, tank battalions appeared. The last - from three companies of 24 tanks in each. It was decided to create 9 battalions for the 72 tank. A brigade unit was later introduced. The battle of Cambrai was attended by 3 brigades - 3 of three-armed battalions (3 platoon in the company, each platoon of 4 tank). In October 1918, the Panzer Corps included 6 brigades.

In France in 1916, 800 tanks were ordered - equally the models of Schneider and Saint-Chamonix. But these cars were delivered mainly only at the end of the 1917 of the year.

December 31 1918 in France was on alert over 2000 light tanks. There were about 50 pieces of medium tanks and about 80 more British tanks.

The structure of the French tank units at first was "a la" artillery (which is logical, given that medium tanks were actually self-propelled guns) - including at the beginning of the 1918 of the year, the 4 group of Schneider tanks in the 4 division (each in the 3 of four-tank batteries) and the 4 group tanks of Saint-Chamon on the 3 division (in each - on the 3 four-tank batteries). At first it was supposed to give each army one group of Schneider tanks (48 units) and one group of Saint-Chamon tanks (36 units) - which was partially implemented. But changes in the course of hostilities triggered a remake of the initial division.

The advent of light tanks led to the introduction of a battalion structure. At the time of the armistice, there were 27 battalions (each 3 company had 3 platoon with 5 tanks in the platoon). Of the 5 tanks making up the platoon, 3 were armed with guns and 2 machine guns. Each company also had a special tank with a wireless telegraph, a reserve of ten tanks and several trucks. 3 battalions were reduced to a regiment. In November 1918, there were 9 regiments, as well as a personnel regiment and a training battalion. The regiments, in turn, were united in the 3 brigade.

France retained the tank units even after the war ended, and in the 1920 year, 9 had tank regiments of the 3 battalion in each. The shelves were assigned 501 - 509 numbers. Places of accommodation: Tours, Beziers, Versailles, Valence, Rennes, Besancon, Metz, Chalon and Lille.

For the 45-day period, the French brought into battle the 3988 tanks.

When the first English tanks appeared in the 1916 and the German High Command took up the tank issue, pilot production of tanks was already organized at the end of that year. Particular attention was paid to tank protection. Experiments were conducted: tanks overcame traps, special barriers, landmines, and anti-tank gun fire. The infantry was actively trained in fighting tanks and equipped with armor-piercing cartridges and anti-tank rifles. Rapid-fire guns were placed on automobile chassis and tracked tractors.

All this has borne fruit. So, for example, during the period 8 August - 11 November 1918 (when the tanks played a particularly significant role), the Germans shot at least 887 tanks and 1500 and 8000 people were killed from the 592 officers and 2562 lower ranks of the crews, respectively. The British tanks were especially often incapacitated due to hits in the unprotected tracks located on top of the hull.

About German tanks, General E. Ludendorf says in his memoirs: “The chief of the Field Automobile Headquarters on time received an order to order the construction of tanks. The tank model, demonstrated by him in the spring of 1917 before the high command, did not meet the requirements. I suggested that he move the tank building energetically. Perhaps I should have made harder pressure; it is possible that then, by the decisive moment of the 1918 of the year, we would have a little more tanks, but I won’t say how much the army needed to build them. It was impossible to let go of more workers; the rear authorities did not find new ones. If people were found, the army would need them, as a replenishment. All the same, we would not have achieved the possibility of mass application of tanks in the 1918 year, but only the mass of the tank matters. When at the end of the war industry was able to build tanks faster and in larger numbers, the high command instructed the military department to order a lot of them. ”.

This is the explanation of General E. Ludendorff.

The first German tanks came to the front by the beginning of the 1918 year. In the summer of 1918, there were a total of 15 units of 5 vehicles each, which were partially equipped with tanks of the German model A7V, and partially captured English tanks.

Operating for 50 days, German tanks, due to their small numbers, did not affect the situation. 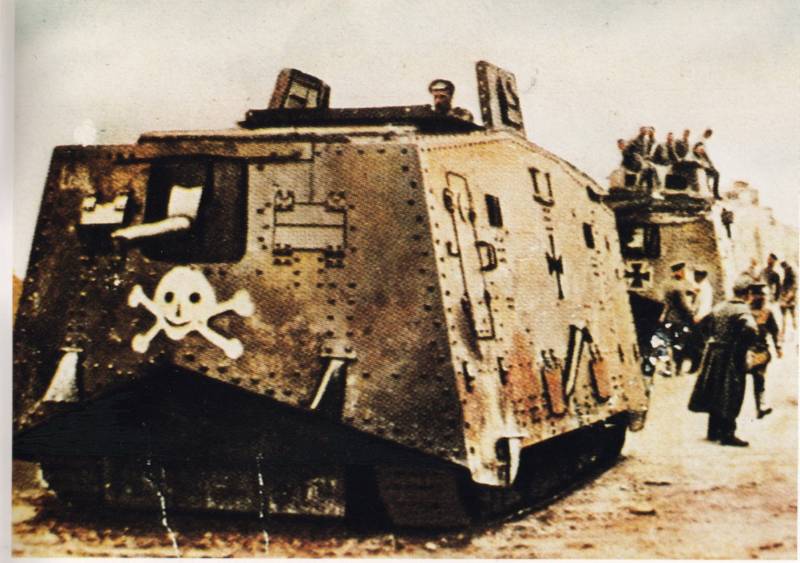 If the German tanks were not used on an appropriate scale, this should be explained mainly by the fact that the significance of these weapons was fully understood only when it was already too late. One thing is certain - the tank issue could have been posed in Germany much more broadly if there were people in the leading circles of the empire who appreciated the new weapons and vigorously lobbied the issue of tank building and the supply of military vehicles to the troops.

The surviving German tanks, having reached their homeland after the abandonment of France and Belgium, suffered, according to the Treaty of Versailles, a sad fate - inglorious to die in the rear, in their homeland.

Author:
Oleynikov Alexey
Articles from this series:
The triumph of allied tanks
Tanks in the battles of the Great War