August 29 2019
14
The first large hydrographic boat-catamaran of project 23370G "Mikhail Kazansky" was launched in Vyborg. This was reported by the press service of the Naval fleet RF. 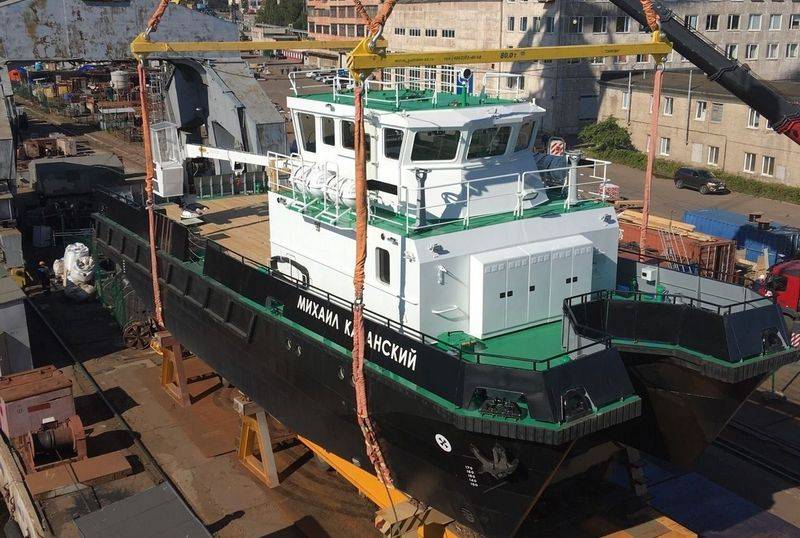 Reportedly, the ceremony of launching a large hydrographic boat of a new generation took place at the Vyborg Shipyard, where the final assembly of the BGK was carried out. Testing of the boat will begin in mid-September and will take place in the Baltic Sea. The transfer of BGK to the Baltic Fleet is scheduled for late October this year.

The Vyborg Shipbuilding Plant JSC held a ceremony of launching the lead ship in the series of the large hydrographic boat (BHC) "Mikhail Kazansky" of the 23370G project, built for the Russian Navy by the Moscow-based KAMPO enterprise
- said in a statement.

The large hydrographic boat of the 23379Г project "Mikhail Kazansky" is the leading one in a series of three boats, the construction of which is carried out by KAMPO in Orekhovo-Zuevo. The boat was laid down at the KAMPO shipyard on 24 on August 2018 of the year, and at the beginning of August this year, the ready-made BGK modules were sent to Vyborg for final assembly.

The second BGK of this project and the first serial "Alexander Firsov" was laid on August 9 2019 in Orekhovo-Zuevo. The bookmark dates for the third boat have not yet been called.

Ctrl Enter
Noticed oshЫbku Highlight text and press. Ctrl + Enter
We are
The second BGN of the 23370G project was laid down at the KAMPO shipyard in Orekhovo-ZuevoIn the Russian Federation will lay the head hydrographic boat catamaran
14 comments
Information
Dear reader, to leave comments on the publication, you must to register.