Features of domestic tanks with guns of caliber 152 mm

August 30 2019
154
In the eighties, work began in our country to create promising tank guns of increased caliber, capable of providing a sharp increase in firepower. The concepts of guns of caliber 130, 140 and 152 mm of various types were worked out. At the same time, all real projects provided for the construction of 152-mm systems. In just a few years, both new guns and tanks were created for them. The latter had a number of characteristic features due to the characteristics of the weapons. 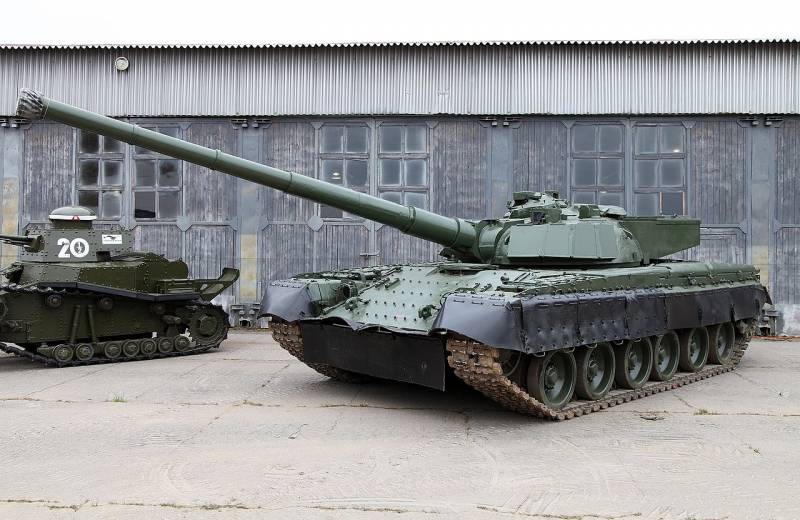 Experienced "Object 292" with a gun LP-83. Photo by Vitalykuzmin.net

One of the first developments of the new class was the smooth-bore 152-mm gun LP-83, which was the result of the joint work of several domestic enterprises. At first, they planned to test it at the stand, and then it was proposed to carry out a test on an experimental tank. The latter was a deeply modernized version of the T-80BV and is known as the “292 Object”.

All the characteristic features of the 292 tank were concentrated in the combat compartment and were associated mainly with the increased dimensions of the guns and ammunition. First of all, the design of the tower has changed. An embrasure of a new design appeared in the frontal part, in which the gun mount was moved forward. The stern was supplemented with a large box-shaped niche. A serious refinement of the tower’s shoulder straps was also needed - in fact, the creation of a new design corresponding to increased loads.

For LP-83 and “Object 292” developed new anti-recoil devices of increased efficiency. With their help, the rollback value was kept at the level of the parameters of serial guns 2A46. At the same time, the impulse of the LP-83 shot was about one and a half times higher. For the “292” tank, a new loading mechanism was also developed for the separately-shell 152-mm rounds. As the project developed, it was planned to transfer the entire ammunition to mechanized laying.

In 1990-91 the experienced “292 Object” entered the firing range to test fire quality. The LP-83 gun showed all its capabilities and advantages over smaller caliber systems. At the same time, the modified T-80BV tank demonstrated its positive qualities. The design of the chassis and the new tower withstood the load and ensured proper operation weapons.

One of the options MBT "Object 477". Figure Btvt.info

The tests confirmed the fundamental possibility of modernizing the existing main tanks with the installation of a new tower with weapons of increased power. However, these ideas appeared at a bad time, and therefore did not reach full implementation.

In the eighties, another tank gun of increased power was created, known under the index 2A73. The Kharkov Design Bureau of Engineering showed great interest in this product, as a result of which the 152-mm guns were present in several of his later projects. At the same time, none of them advanced beyond the tests.

The first version of the tank with the 152-mm cannon began to be worked out at the KhKBM in 1984. It was the “477 Object” or “Boxer”. Subsequently, the code "Hammer" appeared. The main features of such a machine were identified, which later did not undergo significant changes. At the same time, as the project develops, these or those components are constantly being developed.

The 477 project provided for the remote installation of tools under the reduced-size housing. The crew and styling were placed inside the hull, and above them on a rotating base there was a casing with a gun and means of loading. Such a layout of the fighting compartment was to provide maximum security for people and ammunition. In addition, it allowed to reduce the required size of the turret and reduce the weight of the armored car. 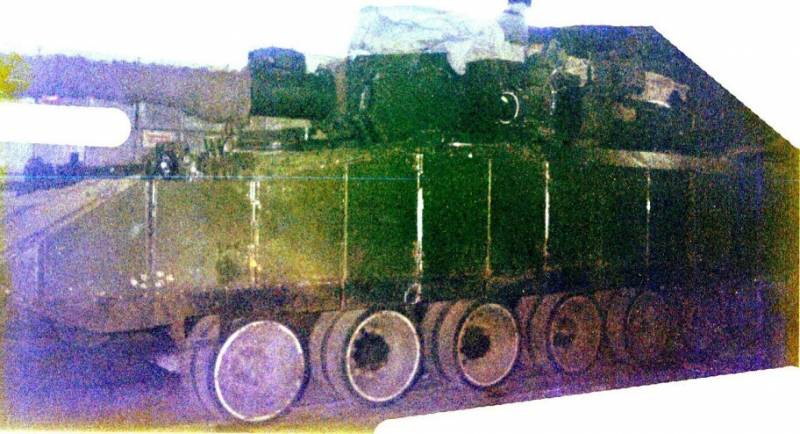 Further development of Boxer / Hammer is the “477A1 Object” or “Note”. Photo Defense-blog.com

Particularly challenging was the development of an automatic loader, capable of raising the components of the shots from the body to the gun. The AZ included two conveyors for storing and supplying shells and shells placed inside the hull. Capacity - Xnumx Shot. There was a separate feed conveyor for 32 shots. There was also a lift for feeding shots into the chamber.

The “477 Object” passed part of the tests, but then the work stopped due to the collapse of the USSR and characteristic problems. Subsequently, unsuccessful attempts were made to revive this project. The modified Boxer / Hammer variants were called the Barrier and the Note. These projects used similar, but modified design solutions. Over time, all such work stopped.

In the nineties, the Ural Design Bureau of Transport Engineering developed its own version of the tank with the 152-mm cannon. MBT "Object 195" or T-95 was to carry a smoothbore gun 2A83 of increased power. It was also proposed to supplement the main weapon with an 30-mm automatic gun.

The 195 project was based on a number of layout solutions aimed at improving crew safety. All tankers had to be located inside the hull and control weapons using remote control systems. The uninhabited fighting compartment was carried out according to the scheme with the placement of weapons under the reduced-size housing. 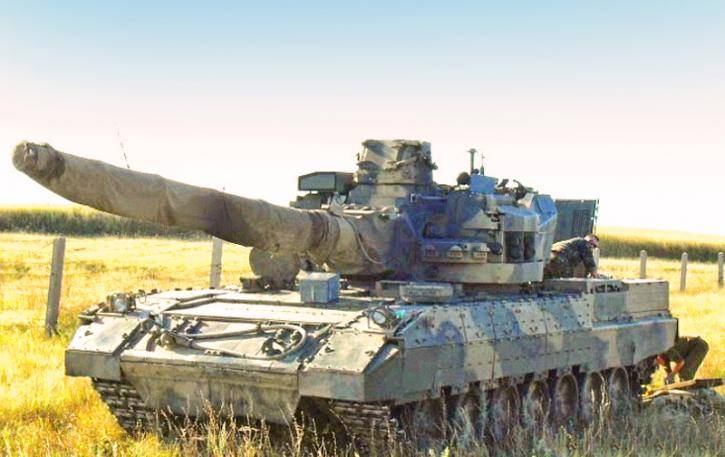 Unfortunately, accurate data on the design of the tank as a whole and its individual units are still missing. However, it is understood that mechanized ammunition packs were located inside the hull. With the help of conveyors and elevators, the components of the shots were to be fed into a low-profile tower, to the gun. For all its complexity, such a fighting compartment provided high combat qualities, increased the safety of people, and also gave a certain potential for modernization.

However, like previous tanks with 152-mm guns, the "Object 195" did not advance beyond the tests. After a long period of uncertainty, it was abandoned in favor of a fundamentally new project. However, apparently, some developments on the "195" / T-95 still found application in the creation of a new unified armored platform.

The secret of "Almaty"

Since 2009, a new unified platform “Armata” has been developed, on the basis of which the promising MBT T-14 has already been created. From the very beginning, the possibility of equipping the T-14 with an enlarged caliber gun appeared on the level of speculation and rumor. Subsequently, there were reports according to which the study of such an option of a “combat artillery machine” was actually underway. In various assessments in this context, the 2A83 gun or a product based on it appears.

How exactly “Armata” with the 152-mm gun will look like is unknown. However, you can try to imagine such an armored vehicle using the available data on the existing MBT T-14.

Separate loading shot for the 2A83 gun. Photo Naukatehnika.com

It is known that the T-14 uses an uninhabited fighting compartment with a custom-designed tower. Under light protection hides a durable casing of the gun mount, on which the 2A82 gun is mounted. Thus, we are talking about a certain semblance of a layout with a remote arrangement of weapons. When installing the 152-mm gun 2A83 can be used in the same layout. It has some advantages, including simplifying the processing of equipment of the fighting compartment for a new gun.

However, accurate data on the "Armata" with a weapon of increased power are still not available. Moreover, even the status of the project remains unclear - unless, of course, it was really developed. Conclusions about BAM based on MBT T-14 can only be made after the appearance of sufficiently detailed data.

It is easy to see that when creating promising tanks with 152-mm guns of increased power, Soviet and Russian engineers worked out different concepts and design options. At the same time, one of the layout options did not receive much distribution, while the other found application in several projects.

The tower of traditional construction, rebuilt for a larger and more powerful cannon, was used only at the “292 Object”. All other experimental samples had remote weapons, protected by a smaller dome. In a similar way, a fighting compartment of a future modification of "Almaty" can be built. 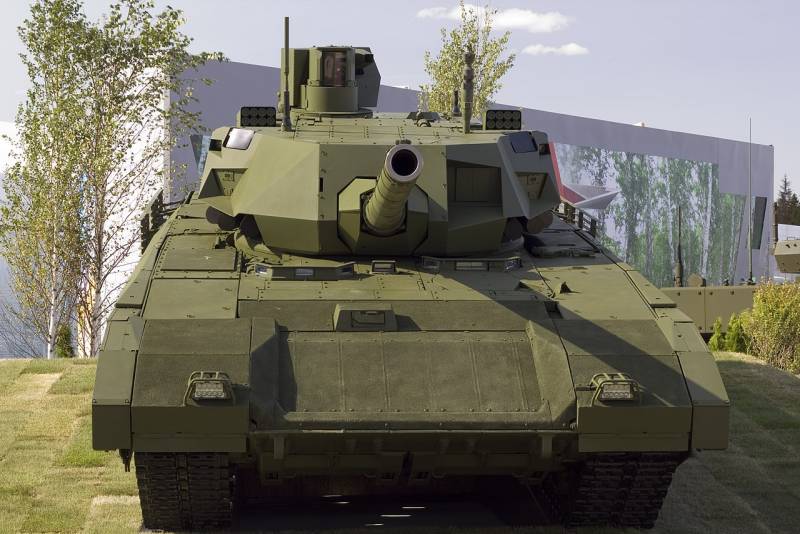 MBT T-14. The characteristic contours of the tower indicate the layout of the internal volumes and hint at the possibility of replacing the guns. Wikimedia Commons Photos

The remote gun does not require a large and heavy turret, and also allows you to transfer crew seats completely inside the armored corps. However, this raises the need for a more sophisticated automatic loader and remote weapon control systems. In the case of an uninhabited fighting compartment, a new chassis is required, since the use of a finished machine can lead to excessive difficulties.

Thus, when it comes to creating a project of deep modernization, as in the case of the “292 Object”, the most profitable is the use of the rebuilt tower. In the case of a completely new tank, the most automated or uninhabited fighting compartment with out-of-arms weapons pays off.

With the available data, it is possible to imagine what paths the development of domestic tank building can take in the future. However, such forecasts will be true only in one case - if the customer shows serious interest in guns of increased power and starts the transition to a new caliber of tank guns.