August 29 2019
6
Today the focus of the shooting crew of the Polygon program on the T24 channel is the Orlan-MK spacesuit - the only orbital-based spacesuit in the world that is not afraid of vacuum, radiation, powerful solar radiation, or high temperature extremes. 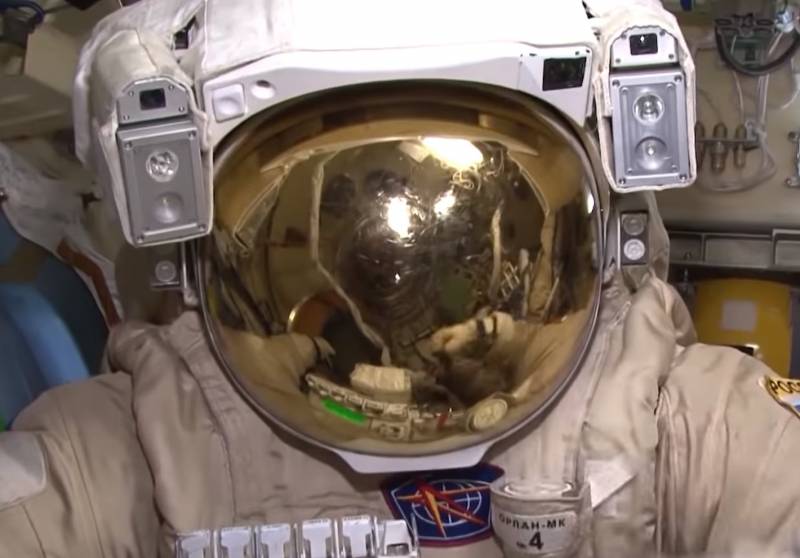 In March 1965, Aleksei Leonov left for the first time in the world in outer space. Outside the spacecraft, he spent only 12 minutes. His space suit “Golden Eagle” consumed about 30 liters of oxygen per minute and was greatly inflated due to the pressure difference. It is for this reason that astronaut Leonov was given incredible difficulty to return to the spacecraft Voskhod-2. For half a century, the “weekend” cosmonaut costume has undergone many changes. Today, the Orlan-MK spacesuit is used on the International Space Station. The most reliable in the world. In it, the astronaut can work in outer space up to 8 hours - a real spacecraft, only in an unnatural size. “Orlan” appeared even during the lunar race and, although the Soviet program was curtailed, the spacesuit was managed not only to be made, but also tested. Design solutions were so successful that today they continue to work in the future.
For the first time in open space, Orlan-MK was used in the 1977 year at the Salyut-6 orbital station, where they carried out research and technical work. Then the "star armor" was operated at the Mir station. During this time, astronauts of forty-two crews made 143 spacewalks in them and worked for more than 700 hours, proving to the whole world that our spacesuits are the most convenient and most reliable.

The construction of the "Orlan" consists of several shells. The body and helmet are made of aluminum alloy in the form of a single rigid body - cuirasses, and the shells of the arms and legs are made of soft materials. To ensure good mobility, the suit is equipped with soft joints and pressure bearings. In order to be inside the spacesuit, you need to enter through the back door, similar to the door of the refrigerator. An autonomous life support system is located in the spacesuit satchel, which allows the astronaut to work for a long time in outer space. Orlan has two containment shells: one primary, the other backup. If one of them fails, the second is automatically connected. Such duplication of all major systems is one of the key features of Orlan-MK. It has two fans - in case of failure of one of them, a pair of pumps that circulate the coolant, and if the automatic oxygen supply does not work - it can be provided manually, ensuring both breathing and the necessary pressure. In case of depressurization, the emergency life support system is switched on. She is able to maintain the necessary pressure inside the suit for 30 minutes. This is more than enough to return to the station. The suit lives on the space station for 5 years. During this time, they go into outer space at least 15 times.

Orlan-MK has been manufactured at the Zvezda scientific enterprise for a year and a half. All materials used are thoroughly processed and sometimes more than once. For example, the fabric from which the spacesuit is created is checked for tensile strength and only then does it get into the sewing workshop. It is here that the pattern of "star armor" occurs, then they are sewn together for months, glued, assembled and checked again in special laboratories. In the sewing workshop, you can look under the lining of the suit. Outerwear consists of several layers: the very first is treated with special impregnation. This is to ensure that there are no fires during exits. The next layer is a radio tissue, this is a kind of antenna in which there is a receiving device for the convenience of negotiations between astronauts. Another layer protects the astronaut from overheating, if it is on the sunny side, and, conversely, from cooling - if in the shade. The maximum temperature overboard can be up to 150 degrees, with both plus and minus.

Another distinguishing feature of the Russian Orlan is its versatility. They can work astronauts of any height. To suit the size of the spacesuit, they fit right in orbit. The only element that is selected individually for each astronaut is gloves. Before getting on the ISS, they are repeatedly tested and tested. A space vacuum is created in a special chamber. Only when gloves are sitting on a hand like glove, fingers have the necessary sensitivity.


Before sending a spacesuit to the international space station, it is tested dozens of times on Earth. Each node, each device and the whole complex are subjected to rigorous verification. In order to simulate the conditions of space flight on Earth, air is pumped out of the pressure chamber, creating a rarefied atmosphere. The purpose of the experiment is to find out how the electronic assistant will transfer the vacuum conditions. Thanks to the computer, the astronaut is always aware of the condition of the spacesuit, the occurrence of emergency situations and recommendations for their elimination. But there are situations beyond the inquisitive mind of an electronic machine. In this case, the astronaut comes to the aid of the MCC - Mission Control Center.

The first "Eagles" were connected to the orbital station by a cable from power and signal wires. He limited the movements of the astronaut and allowed him to work only not far from the lock chamber. The advent of small-sized high-capacity current sources and mobile communications allowed the astronauts to get by with safety harnesses only.

Of course, Orlan-MK spacesuits continue to be upgraded, its latest version is the ISS index, which means modernized, computerized, synthetic. Working in outer space is not an easy task, but it is greatly simplified by such reliable "star armor" as Orlan-MK.