A bad omen for NATO. The hidden side of the infrared stealth "Hunter-B"

August 30 2019
37
The subject of an extremely contradictory spectrum of expert opinions was a video demonstration published by the Russian Defense Ministry on the first flight of a prototype of the promising Russian strike UAV C-70 Okhotnik-B, which took off from the runway of the aerodrome of the V.P. Novosibirsk Aviation Plant. Chkalov 3 August 2019 year. 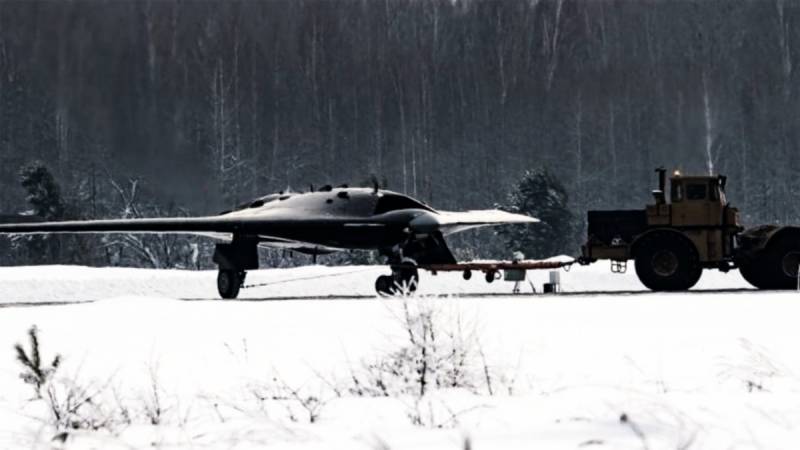 On the one hand, the successful 20-minute test flight of an advanced strike drone, which demonstrated the stable operation of a computerized electrical remote control system and the relatively high flight performance of a flying wing aerodynamic design, marked a new milestone in the development of the Russian unmanned aviation. An “iron” parity was established between the lead developer of S-70, the Sukhoi Company aviation holding company, and the leading Western aircraft building giants Dassault Aviation and Northrop Grumman Corporation, who designed the nEUROn and X-47B drone UAVs. On the other hand, in the design of the glider of the first flight model of the Okhotnik-B UAV, two critical technological shortcomings were noted - the “half-open” architecture of the location of the AL-31F / 41F family of turbofan engines and a standard round nozzle that increased the infrared signature of the drone tens of times in comparison with foreign analogues.

In a series with a new nozzle and modern engine nacelle architecture. The magical transformation of "Hunter-B"

Evil tongues managed to call this configuration of the engine location an “incurable chronic disease” of “Okhotnik-B”, which consists in exposing the most heat-contrasting elements of the UAV power plant in front of the “far-sighted” and highly sensitive optical-electronic sighting systems for viewing the front hemisphere OSF, “Pirate”, “SkyWard -G "and DAS installed on the multi-role fighters" Rafale "," Typhoon ", JAS-39E" Gripen-NG ", as well as F-35A / B / C and operating in the medium-wave (3 - 5 microns) and long-wave (8 - 12 μm) infrared wavelength ranges .

Nevertheless, literally three weeks after the first flight of the "Hunter-B", a bullet point was put on alarmist food for thought. On the eve of the official opening of the International Aviation and Space Salon MAKS-2019 news Runet's publications were full of photographs of the prototype of the serial S-70 with radical structural processing of the tail of the airframe. In particular, the “Okhotniki-B” serial modifications should receive integrated nacelles of the “closed architecture” deep into the fuselage and advanced flat “wedge-shaped” nozzles of the “upper opening” with heat-resistant upper edges shifted forward. What are the advantages of this constructive solution from the specialists of the Sukhoi company?

Recessed deep into the fuselage of the “closed architecture” engine nacelle will minimize heat transfer from the “hot zone” of the AL-31F / 41F engine in general and the combustion chamber in particular to the surface of the Okhotnik-B airframe. Moreover, in the space between the red-hot nodes of the “hot zone” of the engine and the inner surface of the engine nacelle, a specialized multilayer heat-resistant nano-screen can be installed, the interlayer spaces of which will be blown with cold atmospheric air, pumped by a significant number of miniature air-ducting capillaries paired with additional compact air intakes located in leading edges of the wing (outside the mechanization units), or on the generatrix of the main air intake ika.

Currently, the most effective shielding of the “hot zones” of the turbojet twin-circuit afterburning engines of the F135-PW-100 / 600 / 400 and M88-2 series boasts the American 5 multi-generation fighter F-35A / B / C “Lightning II” multipurpose fighters of transitional generation "Rafale". This is evidenced by infrared images of fighter data previously published on Western military analytical sites, obtained by the FLIR System company during several international aerospace salons. In these photos, the engine nacelles warm up and are not observed at all even in afterburner operating modes, which cannot be said about our MiG-29, Sushki and even the F-22A Raptor.

As for the uniqueness of the design of a flat nozzle for serial modification of the C-70 Okhotnik-B, we are not only talking about the displacement of the nozzle channel relative to the axis of the low-pressure turbine and the rear engine mount (it allows to reduce the infrared visibility of the UAV in case of observation by aircraft infrared stations such as OSF and "Pirate"), but also about shifting the top edge of the nozzle forward. This solution allows you to "hide" the infrared radiation of the red-hot upper edge behind the "wedge-shaped" tail section of the "Hunter" airframe at maximum engine operating modes. Consequently, it will be practically impossible to detect this “hot” structural element using ground-based infrared sights provided by modern mobile air defense systems of Western manufacture, while it will be possible to detect a partially cooled jet stream only at a distance of 30 - 40 km into the rear hemisphere and 15 - 25 km - to the front hemisphere. From these distances, Okhotnik-B will be able to work out the enemy’s objects with the widest range of high-precision weapons.

Of course, avoiding the use of an afterburner “Hunter-B” afterburner in a power plant will exclude the possibility of operating at the desired speeds in 1,2 - 1,4М. Nevertheless, the likely integration of the more “high-torque” Product 117 engine (of the order of 15000 kgf) will provide the C-70 with a quite acceptable range of high subsonic flight speeds from 970 to 1050 km / h. At the same time, the estimated range of our stealth drone will be 500 km higher than the unmanned brainchild “Dassault” and “Northrop”.