New US Navy Commander. From Vice Admiral to Commander

August 30 2019
14
The management intrigue with the new commander of the US Navy unexpectedly resolved - immediately after the dismissal of Bill Moren, Admiral Michael Gilday was appointed to the CNO position. This decision, on the one hand, is unexpected - he was not even a close “top” candidate, and six months ago it was not at all a fact that he would have received any promotion. 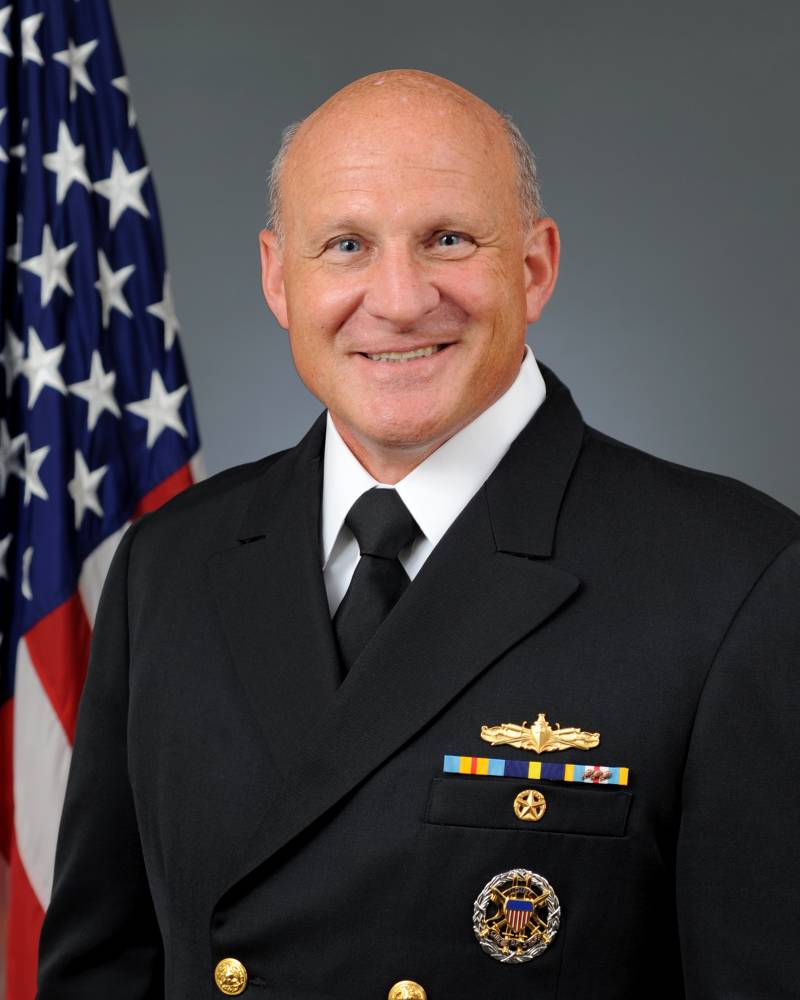 On the other hand, this appointment is in a sense natural. And, like all the previous games around the post of commander, it is accompanied by rather interesting events. But first, a little about the new commander.

Michael Gilday is a model officer. His father was a sailor. He himself graduated from the United States Navy Academy in Annapolis, later at the Naval College in Newport. He began his service on the destroyer Chandler of the Kidd class (USS Chandler DDG 996). Then on the Ticonderoga class Princeton missile cruiser (USS Princeton CG-59) and then on the similar Gettysburg CG 64 Gettysburg missile cruiser. After he became the commander of two successively destroyers of the “Arly Burke” class - Higgins (USS Higgins DDG 76) and Benfold (USS Benfold DDG 65), then the 7th destroyer squadron (7th Destroyer Squadron), then the 8noy strike Avian group.

Then Gilday served for a long time in the command structures of NATO, gaining experience in organizing work with allies and actions on theater of operations close to the enemy.

In 2016 he received a very interesting appointment - the commander of the so-called "Navy cyber command ”, the unit responsible for the war on information networks. Organizational command is subordinate to the headquarters of the 10th fleet of the US Navy, the commander of which "concurrently" was Guilday. To make it clear, this is not a “psychological war”, which is distinguished by propaganda on social networks and the like. This is completely different. 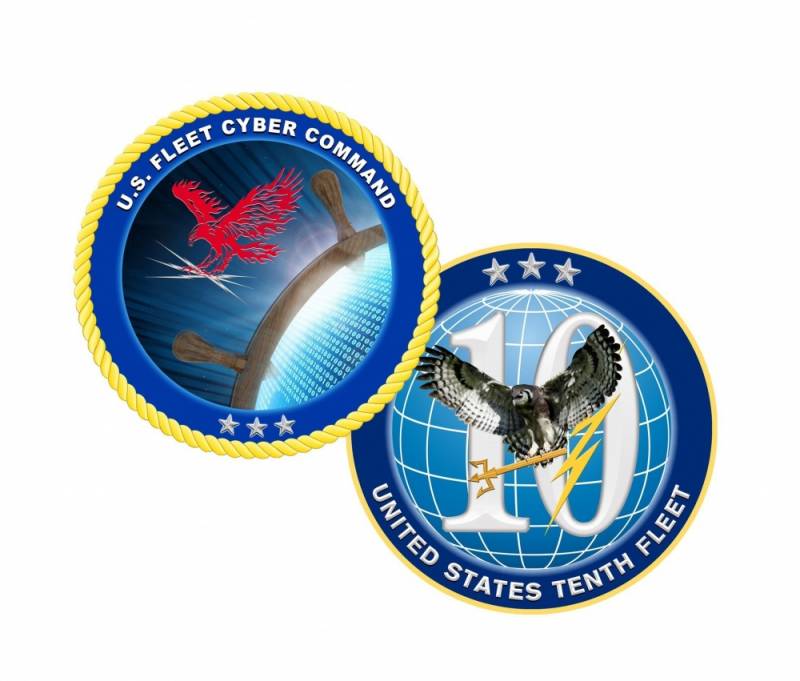 As an illustration, we give an example of a typical task of the “cyber fleet” of the near future. Suppose a certain enemy is tracking the American AUG with the help of unmanned scouts. Cyberflot, figuratively speaking, must, using its equipment, detect communication channels through which information is exchanged with UAVs, find a way to connect to them, decrypt traffic on the go, and, for example, send a fake signal over the network. As a result, the US Navy aircraft carrier will already be turning against the wind to lift the air group, and the enemy will observe on the screens a “fake” picture that is “slipped” to it, on which everything is “as before”.

This, of course, is not a matter of today, but the Americans created their own “cyberflot” with an eye on precisely such a future for their opponents. And Guilday headed this structure, which in a sense is significant. 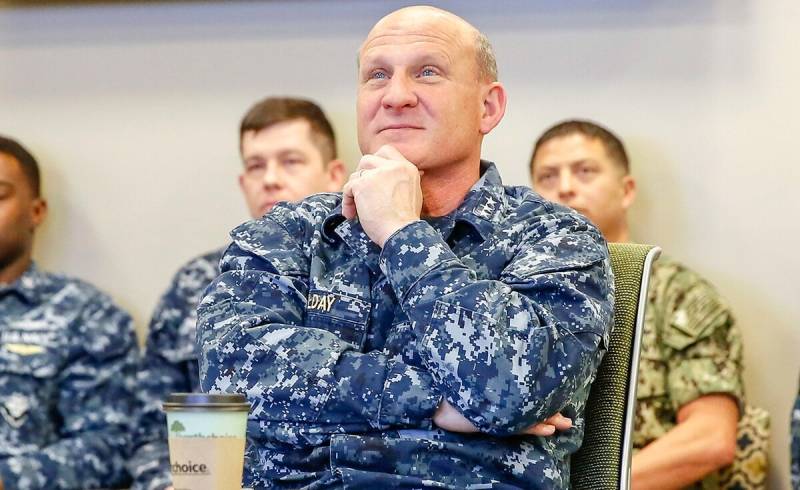 Vice Admiral Gilday, Commander of the 10 m fleet of the US Navy / Cyber ​​Command of the Navy, is located at the Command of the Naval Information Operations, also known as Task Force 1080, in Aurora, Colorado. 13 March 2017 year

From the post of commander of the 10 fleet / cyber command of the Navy, Guilday was appointed Director of the OKNS (the director acts as the Deputy Chairman of the OKNS on organizational issues). And from there he was urgently “moved up”, first giving a full four star admiral, and then quickly making him commander ...

On February 18 on February 1991, Lieutenant Gilday, kept watch at the Princeton cruiser’s combat information center, being there as a Tactical action officer, a watch officer obliged to control the battle in the absence of the ship’s commander at the fighting post. The Princeton was in the Persian Gulf, there was already a war with Iraq, and the ship could be under attack at any time. And he was under it - at some point, the cruiser was successively blown up on two Iraqi mines.

The hull suffered serious damage, so extensive that the strength of the ship as a whole was in doubt, numerous leaks opened up, many ship systems were de-energized, including the air defense system being completely disconnected. Having lost both its course and its defensive capabilities, the ship turned into a target that could be sunk by a single Iraqi plane. Lieutenant Guilday led the fight for survivability at the BIC, thanks to his actions, the power supply of all systems was quickly restored, and the air defense systems of the ship were restored.

Subsequently, Guilday assumed command of the cruiser’s air defense. He and his shift were in combat posts for almost a day, so as not to distract other personnel from the struggle for survivability. They were replaced only when the ship was withdrawn from the minefield.
Guilday was awarded the Commendation Medal. Later he participated in the restoration of the cruiser. All this also contributed to his career advancement.

What’s interesting about his appointment is that when in the first half of July it became clear that Morin would not be the new commander, Guildai, who was vice admiral at that time, was brought to Congress by the "bullet" and there he quickly and with first attempt received approval and as a four-star admiral, and as a candidate for command, and all this was done without any fuss, although in secondary secondary war editions, Guilday was mentioned as “Spencer's candidate” (Richard Spencer, Navy Minister), who will be urgently promoted to the rank of the closest time and which, if Congress doesn’t mess around, will become the new commander in chief. Congress, however, could well have fussed. But in the end, everything turned out, Gilday received "two in one" - and the fourth admiral star and a new post, and on 22 on August 2019 took office.

So the new commander of the US Navy found quite quickly - just 22 days later than planned.
Gilday became a candidate for commander when he was still a vice admiral, despite the fact that the US Navy had “four-star” admirals, whose circle, by tradition, was to become the source of the new commander. Formally, the President has the right to nominate the vice admiral to the post of commander, but the last such commander was Admiral Zumwalt in the 1970 year.

But such a rapid advancement of a junior officer in a senior position in the Navy is not the only surprising fact in this whole stories.
Let us recall that the main “clans” in the US Navy have always been deck pilots, submarines and submariners. Morin with his “background” pilot base patrol aviation would be a very striking exception. Morin, however, did not succeed. Well, what didn’t work for the anti-submarine pilot Moren happened (and very suddenly) for the “hacker” from the “cyberflot” of Guilday, which is also an unprecedented event. 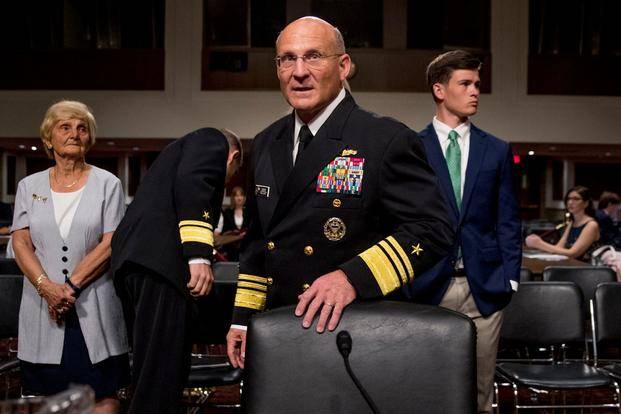 31 July 2019 year. Gilday arrived at the Senate Committee on the Armed Forces to consider his candidacy for the post of commander and at the same time to consider his extraordinary promotion to the admiral. His face shows that he hardly believes in what is happening. But someone organized it all. Quick

And this very clearly reflects the direction in which the US Navy is developing.

Cyberwarfare as one of the full-fledged types of hostilities is not perceived in most of the Armed Forces of the world. And already as dominant - even more so. Computers, servers and hackers-programmers "do not look" against the background of rockets, attack aircraft and heavy bombs.
It’s just that they will someday be able to force the fleet and enemy aircraft to fight each other, but now their role is not obvious. Not obvious to anyone but the Americans.

And it is precisely this understanding of the role of a new kind of troops in the war of the future that makes the appointment of Giolday not only unexpected, but also logical - no one expected this, but once this was inevitable to happen. It so happened what happened now.

The new commander of the US Navy came from the “cyber fleet”, and even suddenly, as if someone had pulled the “joker” out of his sleeve, having gone through all the approval procedures and assigning an extraordinary military rank at an unprecedented pace, so that the old Navy clans simply did not have time take in response to such a candidacy. Perhaps this means a little more than it seems to us today. Including for us.