With the geographical position of Turkey, luckier than anyone, I guess. On the one hand, the country connects Europe and Asia, and on the other, it has access to four seas at once. In many ways, it is from the political and military well-being in this state that peace in the Black Sea region, the Middle East and the Mediterranean depends. However, now Turkey is openly viewed by the collective West as a “second-class” state, which is very painfully perceived by both the country's leadership and the majority of the population. It is noteworthy that the first shoots of the ambitious rebirth of Turkey appeared during the collapse of the Soviet Union. It was at this time that President Ozal said: "The Turkic world will become the dominant factor in the Eurasian space from the Balkans to the Chinese Wall." 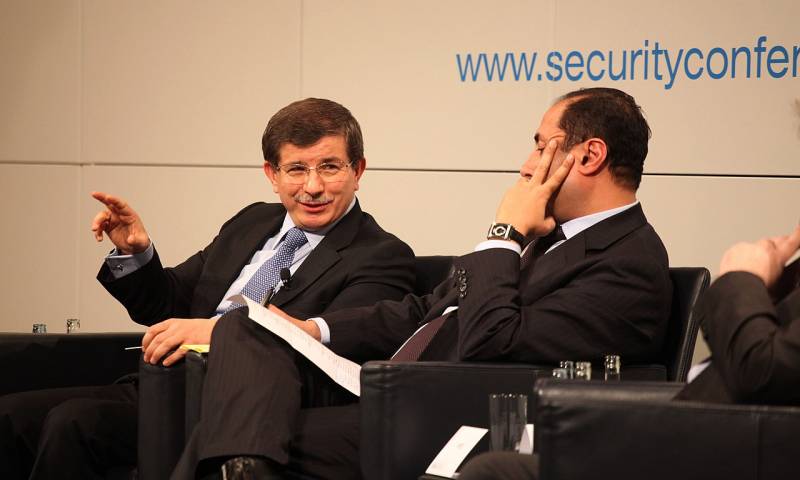 The Turks did not shy away from supporting the separatists in the Russian Caucasus, and also established strong ties with the former republics of the USSR, sometimes to the peak of Russia. At the beginning of the 90's, a “magnetic” concept appeared in Turkey, according to which the country was considered as a center of attraction for the former Soviet republics. In the 90 years, the Turks did not forget about the West (after all, the country belongs to the NATO bloc), periodically reminding itself of itself with requests for membership in various structures (primarily in the European Union). But with the beginning of the 2000's, things gradually began to change. Crimean Tatar by origin and Prime Minister Ahmet Davutoglu appeared on the political front, who composed the landmark work “Strategic Depth”. It was with his appearance in the country that they recalled that once Turkey was a powerful power, from which everything was taken away at the beginning of the 20th century. And so the main political and ideological trend in the country appeared - “neo-Ottomanism” (“Yeni Osmanlicilik”). The foundation of the "new Ottomanism" is four principles: blood, Ottoman thinking, soil and language. Blood and language are attention and orientation, first of all, to Turkic peoples. 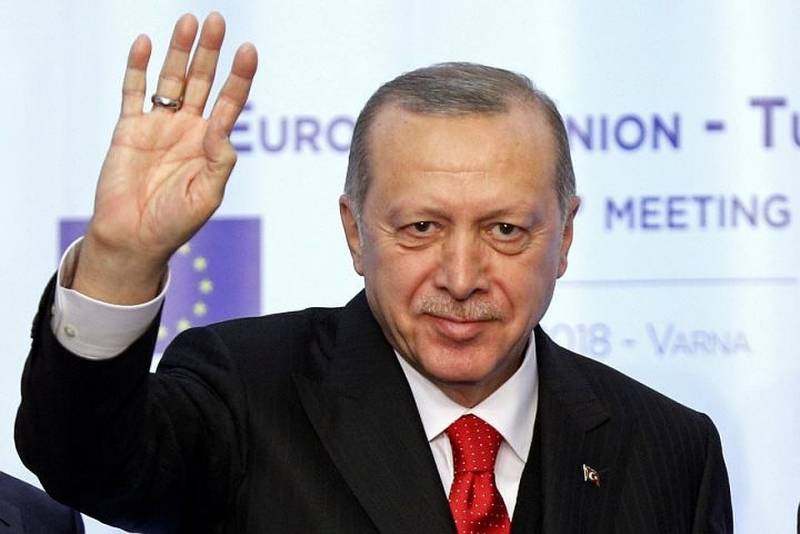 Erdogan - Super President of the Republic of Turkey

The soil and Ottoman thinking take the state’s foreign policy vector to a new level, focused on the former territories of the Ottoman Empire and neighboring states. It is supposed to include all economic and political resources for the withdrawal of Turkey into supra-regional leaders. At the same time, the leadership hinted non-transparently that in which case more decisive scenarios for solving problems are possible. Examples include Turkey’s closure of the border with Armenia, support for Bosnian Muslims, recognition of Kosovo, an economically disadvantageous feud with Israel, the destruction of a Russian Su-24 aircraft, and a military operation on Syrian territory.

Modern Erdogan Turkey is moving along the typical imperial path of development associated with active military-political expansion, which in some cases openly resembles revenge. Everything is quite simple - modernization along the imperial path requires serious resources that Turkey does not have. This is largely due to the cooling of relations with the United States and the European Union (especially after the attempted coup d'etat of the 2016 of the year), and largely due to Erdogan’s inefficient domestic economic policy. All forces are devoted to foreign policy, expanding regional (and even global) influence and access to energy resources. An important link in this work is the indoctrination of the Turkish population, who are openly told that without external expansion, a good life will not be. The situation has gone so far that if the opposition suddenly comes to power, then it will take several years to change course - the population will not understand the sudden deviation from the covenants of the great Erdogan. Of great concern should be the turn of the ideology of the ruling Justice and Development Party from the course of moderate Islamism to outright Islamic fundamentalism. And every year an increasing percentage of the population of our southern neighbor is drawn into this course. Islamic customs are gradually returning to the everyday life of a once secular country, religious education is developing, the influence of the ulama, sheikhs and jamaats in both central and regional government is expanding. For Turks, a public opinion is being created that Erdogan’s new Turkey deserves to become a leader in the Muslim world at least in its region. 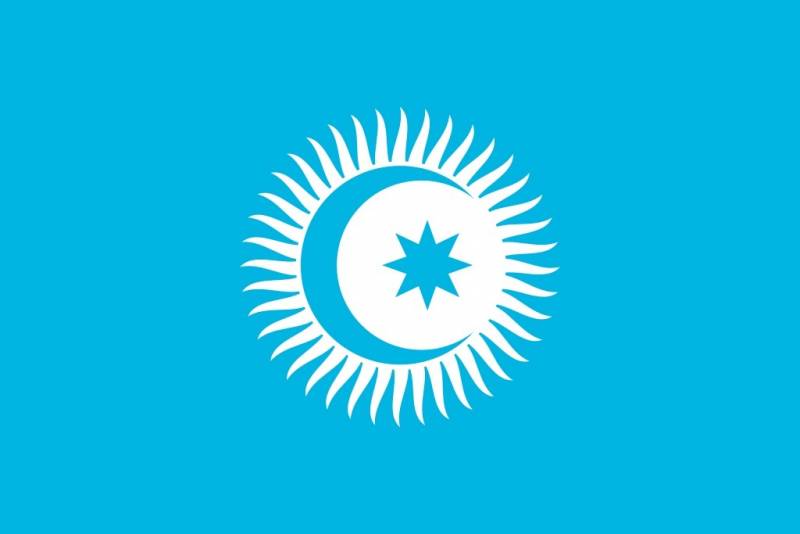 Flag of the Turkic Union

The economic component of external influence also plays an important role in the imperial model of development. Turkish investors not only invest heavily in nearby states and regions, but also create some lobbying groups that influence public opinion and leadership. The most important objects of influence are Central Asia, Azerbaijan, Georgia, Ukraine, Moldavian Gagauzia, Kosovo, Bosnia and Herzegovina, Macedonia, as well as Russian Tatarstan and Crimea. The Turkic Commonwealth of States (Turkic Council) is being created, which they are trying to position as an analogue of the European Union for Kazakhstan, Uzbekistan, Azerbaijan and Kyrgyzstan. This is the so-called “soft power”, the purpose of which is the economic and political dependence of neighboring states, to which territorial claims can later be made and, finally, to regain previously lost regions.

The outspoken vassals of Turkey appear, openly saying: “Turkey is Kosovo. Kosovo is Turkey ”. The words belong to the Minister of Foreign Affairs of Kosovo, Hashim Thaci. The situation is similar with Azerbaijan - the phrase “one nation, two states” is used there. The countries of the Levant and the Maghreb also do not refuse a kind of Turkish assistance, not fully realizing what this may lead to. In the Turkish government, it is not considered impossible to acquire new lands that had never previously belonged to the Ottomans. So, the Russian special services on time and decisively stopped the too zealous activities of Turkish non-profit organizations in the Volga region. Activists of the Justice and Development Party openly call themselves "Osmanli torunu", that is, "heirs of the Ottoman Empire." Such revanchist sentiments are skillfully masked by the previously mentioned ideology of “soft power”.

But in 2011, this “soft power” suddenly became quite “hard” in the wake of riots in Syria. Erdogan suddenly realized that his chance had come, Assad was about to fall, and a large piece of Syrian territory could well become part of Turkey. Hiding behind the ideas of protecting the peaceful Turkic population, as well as creating a corridor for refugees, the Turks sharply increased military activity in the region. In many ways, it was Turkey, together with Saudi Arabia and Qatar, that created powerful resistance to official power in Syria. As a result, nothing particularly good happened, but the prospect of creating a Kurdish quasi-state near the border became quite possible. And then military equipment was used as part of operations with the beautiful names "Shield of Euphrates" and "Olive Branch".

There is no money for the army

Without powerful armed forces, the Turkish leadership does not have to rely on an effective imperial policy. But with this complexity. They quarreled with the Americans over Gulen and C-400, which negatively affected the economic situation (although they would not completely break off all US contacts because of the Incirlik base). The centralization of power and the economy also does not bring any special benefits - unemployment is growing in the country, the standard of living of the population is expectedly decreasing. As a result, for the 2019 year, the military budget was cut to 8,3 billion dollars, while a year earlier it was 11,1 billion. The quality level of units also fell - in 2018, more than 6,2 thousand officers suspected of preparing a coup in 2016 were laid off. But even in such conditions, the Turkish leadership plans to modernize its armed forces by the 2033 year. What does the rearmament and reform program include? 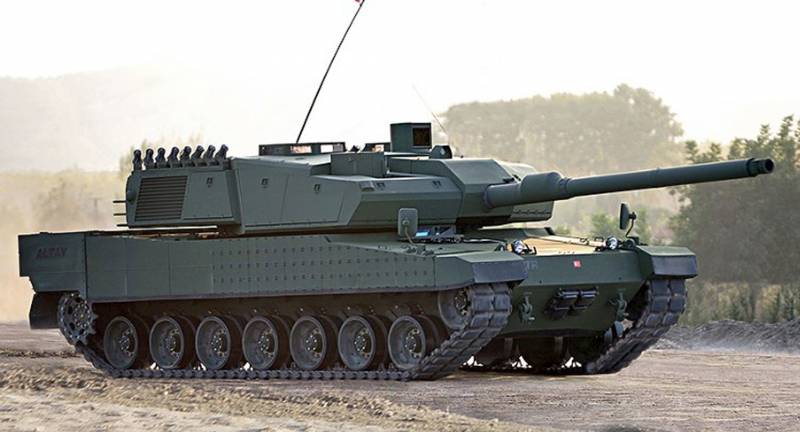 "Altai" - the main hope of the poor defense budget of Turkey

First of all, this is the creation of highly mobile ground units and an increase in the amphibious landing capabilities of the naval forces. To do this, they will reduce the number of ground forces, while simultaneously equipping them with the latest technology, as well as commissioning one or two Anadolu-class tank landing ships annually. Of great importance is the creation of commando shock brigades, sharpened to eliminate Kurdish separatism and actively go beyond Turkey to Iraq and Syria. Planned after severe tank losses in the "Shield of Euphrates" and "Olive Branch" urgently update the fleet of armored vehicles. For this, the acceptance into operation of the long-awaited Altai is accelerated. 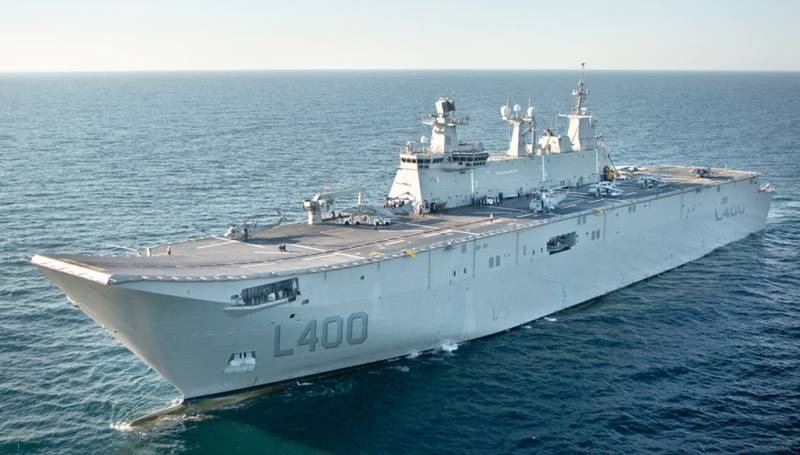 In early May 2019, the first universal landing ship L400 Anadolu, commissioned by the Turkish military, was launched

It is noteworthy that for the country's air force, in fact, the secondary role of fire support of ground tactical groups in low-intensity conflicts is assigned. Therefore, the plans are only the modernization and purchase of C-130 and A-400M. Perhaps this is why the Turks so easily endured the abandonment of the F-35, and the prospect of buying the Russian Su-57 can only be a demonstrative political action for NATO counterparts.
The concept of revenge-seeking “soft power” drives Turkey into an economic and political impasse, which may cause unpredictable convulsions in the leadership, similar to the attack on the Russian Su-24. One can only hope that Erdogan and his entourage remember the reasons why the Ottoman Empire turned into modern Turkey.