August 28 2019
25
For many of us, Duster is associated today with the Renault compact crossover, which is presented on the Russian market and is quite popular with car owners. Meanwhile, long before the appearance of this car, the American anti-aircraft self-propelled gun, created after the end of World War II on the basis of the lightweight, received the same nickname tank M41 Walker Bulldog. Built by a sufficiently large series of ZSU, it was practically not used to combat low-flying air targets, but it proved to be excellent in Vietnam, where it terrified the Viet Cong. 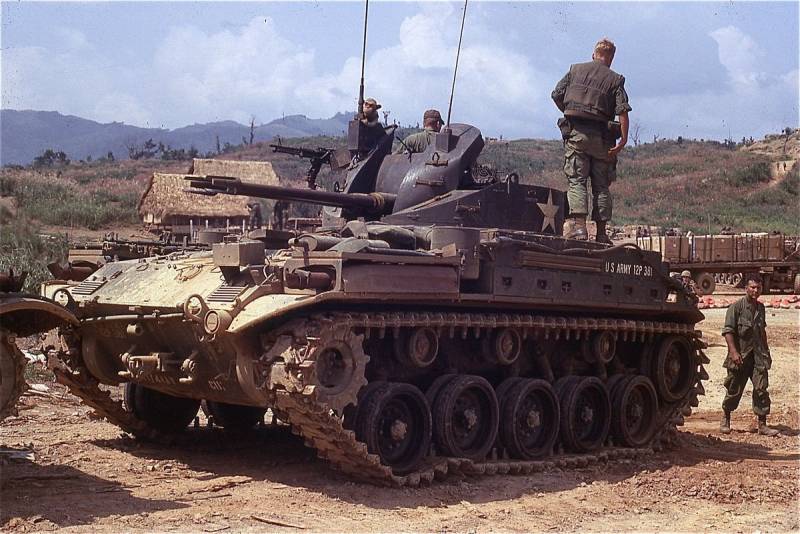 M42 Duster from idea to implementation

At the end of the 1940's, the American army was armed with a large number of combat vehicles created on the basis of the M24 Chaffee light tank, the combat debut of which fell on World War II. Among them was the M19 self-propelled anti-aircraft gun, the main weapon of which was the paired 40-mm gun mount from the Bofors guns. This installation was released in small series, not more than 300 ZSU. She did not take part in the hostilities of World War II, but was used by American troops during the war in Korea. The fighting on the Korean peninsula showed that the chassis of the M24 tank is not very reliable, so the military decided to start the process of developing a new family of military equipment on the basis of the more advanced lightweight Walker Bulldog M41 tank.

The new light tank, which was originally designed for replacement in the Chaffee forces, was created between 1946 and 1949. Serial production of the M41 tank continued in the USA until the end of the 1950's. On the chassis of the Walker Bulldog light tank, American designers created a number of different combat vehicles for their purpose - from the 155-mm M44 self-propelled howitzer, which is familiar to many fans of the World of Tanks game today, to the M75 tracked armored personnel carrier, which turned out to be not the most successful machine, but was released in an impressive series of 1780 copies. Another development of the American military-industrial complex was the M42 Duster anti-aircraft self-propelled gun built on the basis of the Walker Bulldog tank, armed with a paired 40-mm artillery mount.

At first, the Americans worked out the option of creating a new ZSU, which could interact on the battlefield with a target designation machine equipped with a compact radar. However, the technical base of the 1950's did not allow to realize this idea. The industry and technological base were not yet ready to create a small-sized radar that would retain its functionality when mounted on a crawler chassis and traveling over rough terrain. As a result, priority was given to the creation of a traditional anti-aircraft system with an optical target guidance system, which was not much different from military vehicles during the Second World War. 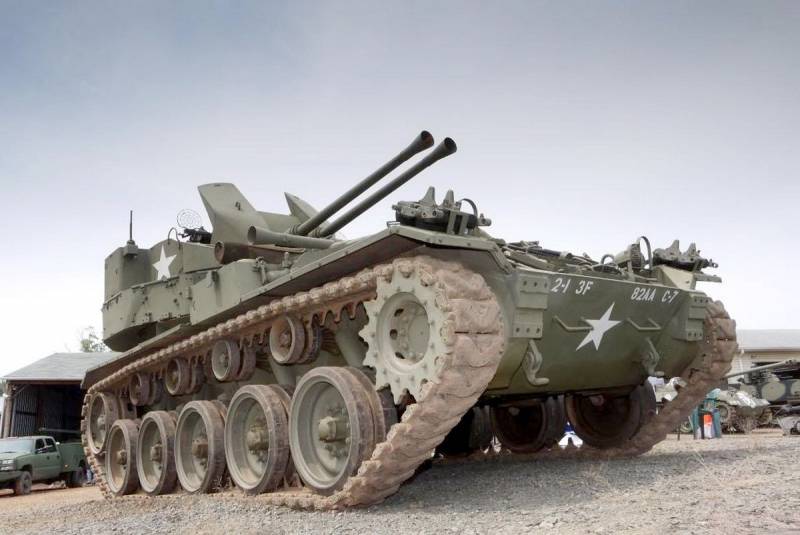 ZSU M19
The prototype of the future ZSU received the designation T141, its testing and certification process continued in the United States until the end of the 1952 year, and already at the end of the 1953 year the new anti-aircraft self-propelled gun was officially adopted by the American army under the M42 index. During the years of serial production, which ended in 1959, the American industry transferred to the military about 3700 such combat vehicles that remained in service with the army until 1969, after which they continued to serve in parts of the National Guard, where the equipment was actively used until the beginning of the 1990 years. In the army, by the beginning of the 1970's, the installation was replaced by a more advanced M163 ZSU, the main armament of which was the 20-mm six-barreled M61 Vulcan gun.

The new American ZSU retained the chassis of the M41 tank with torsion bar suspension and five track rollers on each side, but the body of the combat vehicle underwent a significant alteration. Externally, the new anti-aircraft installation was a hybrid of the Walker Bulldog light tank, on which a tower with 40-mm guns from the M19 installation was installed. The hull of the tank was seriously redrawn by the designers. If the back part has remained practically unchanged, then the front and middle have been substantially modified, this space was actually redesigned. Separately, it can be noted that, unlike the M19, on the new installation, the fighting compartment was placed not in the stern, but in the central part of the hull.

In the front of the body of the anti-aircraft self-propelled guns, later nicknamed Duster, the designers placed a control compartment, which grew in volume compared to a light tank. In ZSU here were the places of two crew members - the driver and installation commander, the first sat on the left, the second on the right relative to the axis of the combat vehicle. The designers changed the inclination of the frontal plate of the hull (reduced it), and also placed two hatches in the roof of the control compartment for crew members to access their workplaces. At the same time, in the frontal part of the hull, right in the center of the inclined armor plate, an impressive rectangular hatch appeared, which became one of the hallmarks of a combat vehicle. The main purpose of the new hatch was to load ammunition into the combat vehicle. 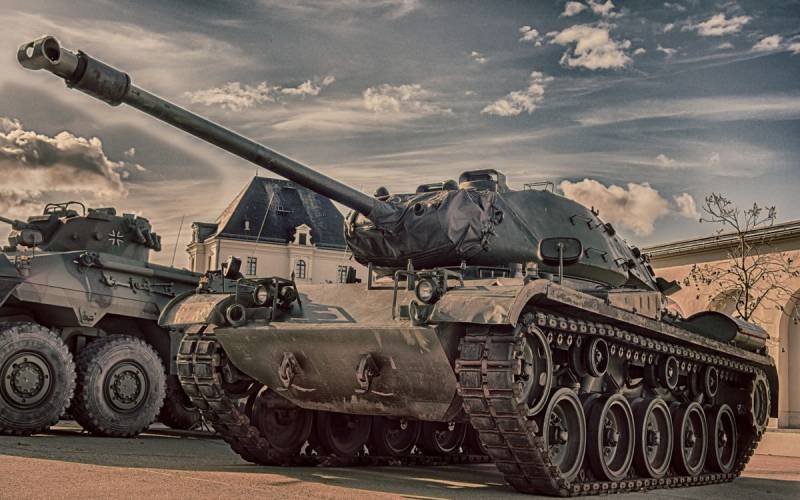 Light tank M41 Walker Bulldog
In the central part of the case, the designers placed a circular rotation tower open on top, borrowed from the previous M19 ZSU. To do this, I had to seriously change the hull, since the shoulder straps of the tank tower and the tower from the ZNS M19 did not coincide in size. In the open tower were the places of four crew members - the calculation commander, the gunner and two loaders. In the vast majority of cases, the crew consisted of five, not six, since the installation commander took over the duties of the crew commander, but there were still six crew platoon commanders.

The main armament of the ZSU was the twin installation of the 40-mm automatic guns M2A1, which was a licensed version of the famous Swedish anti-aircraft gun Bofors L60, which was sold all over the world and is still in service with many countries. The rate of fire of the guns was 240 rounds per minute, while after 100 rounds the barrel was ordered to stop shooting, as the barrel was air-cooled. Massive flame arresters were installed at the ends of the barrel, which were dismantled at many installations that took part in the fighting in Vietnam. Ammunition installation consisted of 480 shots. The reach of the guns in height was 5000 meters, when shooting at ground targets - up to 9500 meters. The angles of guidance guns from -5 to + 85 degrees. The turret rotation could be carried out both in manual mode and with the help of an electro-hydraulic drive, while the speed gain was insignificant (10,5 seconds in manual mode versus 9 seconds for electric turret rotation by 360 degrees).

The installation was driven by a Continental gasoline-powered six-cylinder engine of the AOS-895-3 model, the same air-cooled power unit was also used on the M41 Walker Bulldog light tank. Engine power in 500 hp was enough to disperse the M42 self-propelled anti-aircraft gun weighing 22,6 tons to 72 km / h. Cruising on the highway was 160 kilometers. The reason for not the most outstanding indicators is the insufficient fuel supply, limited to only 140 gallons. 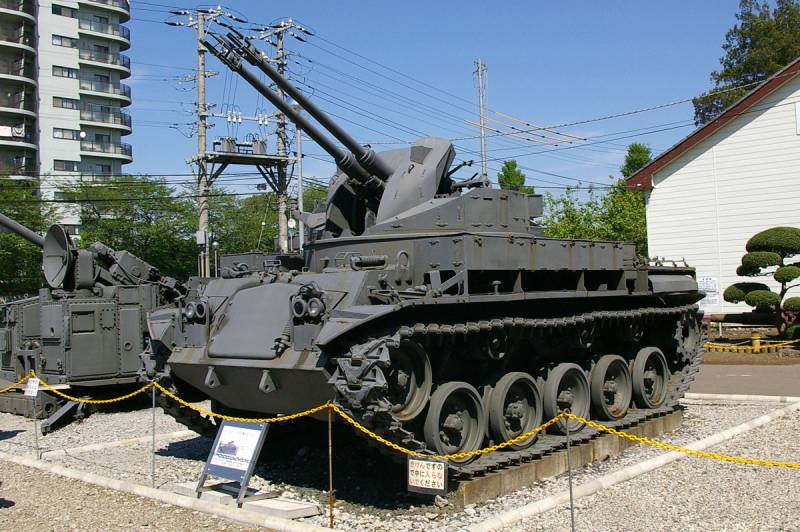 Although the first M42 Duster ZSU began to enter the army in the 1953 year, the new combat vehicle did not have time for the war in Korea. At the same time, in the American divisions, the new anti-aircraft self-propelled guns quickly replaced not only the predecessor vehicles, but also the towed versions of the 40-mm “Bofors”. The full-fledged combat debut of the American self-propelled anti-aircraft guns occurred in the Vietnam War, where the M41 Walker Bulldog light tanks were hardly used, but work was found for vehicles built on their basis.

According to the states, each mechanized and tank division of the American army included in the M42 ZSU division, a total of 64 units. Later, the divisions of these self-propelled anti-aircraft guns were also included in the composition of the American airborne divisions. At the same time, parachute landing was not allowed, the calculation was on the delivery of heavy transport aviation to captured airfields. As with any other anti-aircraft self-propelled guns, the main task of the M42 Duster was to combat air targets, but in the absence of them, they were quite effective against ground targets. 40-mm automatic guns made it possible to confidently fight against infantry, as well as enemy military equipment, including lightly armored targets. 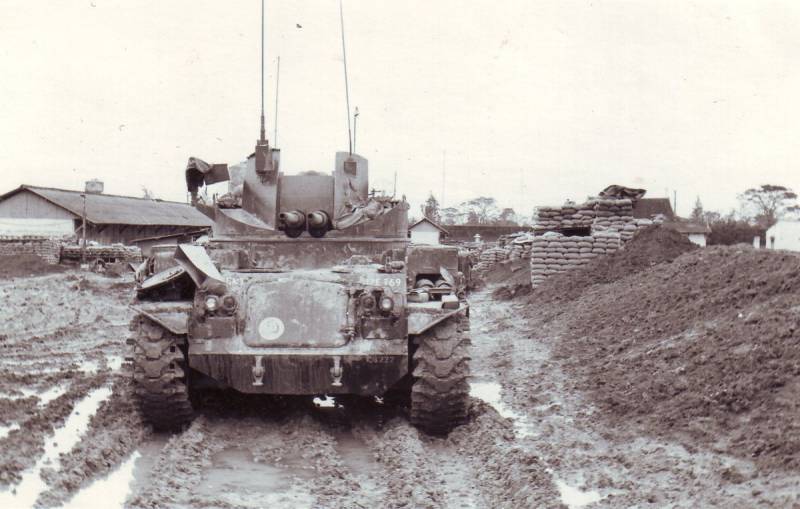 M42 Duster in Vietnam with removed flash suppressors
As you might guess, in Vietnam, the installation was not used for its intended purpose, since the Americans had no air adversary. True, the installations could not have been able to fight effectively with modern enemy jet aircraft with all their will. By the end of the 1950's, these were obsolete vehicles, the composition of weapons, sights and a fire control system of which remained at the level of technology of the Second World War. But the “Dusters”, which had a high fire density of 40-mm guns, proved to be very helpful in defending stationary objects from ground attacks: they were used to guard air bases, artillery strongholds, and escorting military convoys.

It was in Vietnam that the installations got their name Duster (raising dust). Indeed, when shooting at ground targets, when the ZSU guns were horizontally mounted, the installation was quickly covered by a cloud of dust rising from the ground. Partly for this reason, flame arresters were dismantled from many ZSU in Vietnam. In addition to the fact that such an upgrade reduced dust formation during firing, it also increased the psychological effect of influencing enemy soldiers, who dubbed the anti-aircraft self-propelled guns “Fire Dragon”. Indeed, only a few “Duster” could create a wall of fire in the path of the advancing enemy infantry, turning the advancing infantry units into a bloody mess. At the same time, 40-mm shells were effective against the enemy’s armored targets. Armor-piercing projectile shells without any problems pierced the Soviet amphibious tanks PT-76 delivered to North Vietnam, as well as their Chinese counterparts, Type 63. 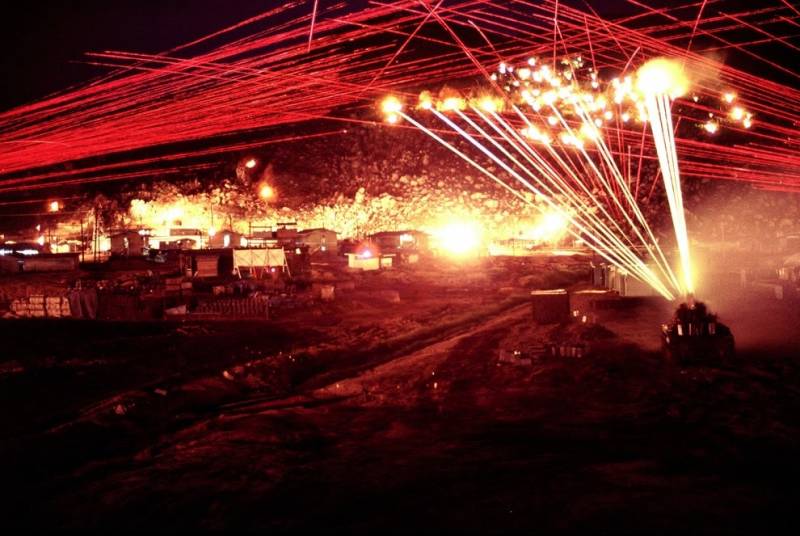 Installation M42 Duster fires, Fu Tai, 1970 year
Realizing the futility of daytime attacks, the Vietnamese preferred to act at night, but even this did not save much from quick-fire anti-aircraft guns. Especially for operations in the dark, the divisions armed with M42 Duster ZSU were equipped with two types of searchlight batteries: 23-inch and more advanced 30-inch searchlights (76 cm AN / TVS-3). These spotlights could work not only in the visible, but also in the infrared spectrum. In night mode, they worked in infrared radiation, allowing observers equipped with night vision devices to detect targets, after which the enemy was illuminated with ordinary light and became a victim of concentrated fire, from which it was almost impossible to escape. In Vietnam, the M42 Duster ZSU were used by the Americans until about 1971, after which the units that remained in service began to be transferred to the armies of South Vietnam as part of a policy of “Vietnamizing” the war.