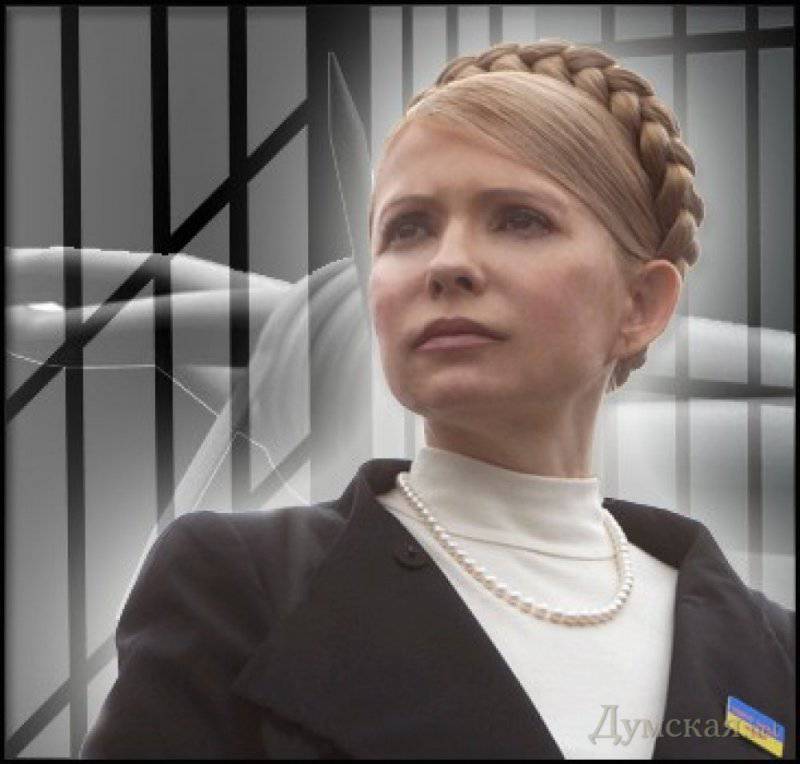 In Ukraine, the “gas conflict” that arose as a result of the signing of Y. Tymoshenko and the Russian Prime Minister of the agreements on the supply of blue fuel in 2009, does not abate. The signed contract established for Ukraine the price of gas is significantly higher than other consumers of Russian fuel.

In the “gas war” there is no talk about the profits or losses of Gazprom, RosUkrEnergo and Naftogaz of Ukraine - this is not an intercorporate war, most likely it is a strategic relationship at the interstate level.

It is believed that only Russia benefited from the terms of the gas agreements signed, but they brought huge losses to Ukraine.

The Ukrainian top management constantly publicly complains that the entire population of the country suffers from an agreement on gas supplies from Russia signed by Y. Tymoshenko. The current Ukrainian Prime Minister does not openly blame the Russian side for this, but places the entire responsibility for the damage on the officials who participated in the negotiations and the signing of the agreement.

All efforts of the Ukrainian government to achieve a revision of the gas contract from 2009, have been unsuccessful. The only thing that was done was to condemn the former Prime Minister Yulia Tymoshenko to seven years in prison.

The West did not support this decision of the Ukrainian justice, because it believes that Tymoshenko made the right decision in a critical situation, which allowed the Europeans, in the conditions of the winter of 2009, to restore gas supply to their consumers. They are not interested in the loss of Ukraine itself from this decision and the corrupt supply chain.

The question of the possible release of Tymoshenko, which is sought by supporters of the "orange princess", faces the current government of Ukraine quite sharply. Indeed, in the event of Y. Tymoshenko’s release from imprisonment, she can constitute a real political threat to the current ruling cabinet and, especially, President Yanukovych — the autumn elections to the Verkhovna Rada are on the agenda, and then presidential elections are not far off.

In order not to allow Yulia Tymoshenko to participate in the political life of the country, the court began consideration of the case of violation of the current legislation by the United Energy Systems Corporation (UESU), which was personally owned by Y. Tymoshenko (the company was created by Yulia Tymoshenko and her husband, Alexander Timoshenko family friend Alexander Gravets). The corporation existed from 1995 to 2009. In 90-ies, “EESU”, thanks to the use of Tymoshenko’s state resource, in a short time became one of the monopolists of the Ukrainian gas supply market. Since A. Gravets, one of the founders, had a registered company in Cyprus, EESU enjoyed tax breaks as a company with foreign investments.

The curator of such a profitable business was the former Ukrainian Prime Minister P. Lazarenko (later, he was sentenced by a US court for fraud on money laundering).

EESU is accused of embezzling public funds and tax violations. The criminal case on tax evasion Y. Tymoshenko was initiated 11 years ago, but in connection with the victory of the Orange Revolution, as a result of which Yulia Tymoshenko occupied a high government position, the case was closed. Despite the fact that the statute of limitations for this crime has already expired, the law enforcement agencies of Ukraine resumed the investigation.

The reason for initiating a new investigation regarding the activities of Y. Tymoshenko was the appeal of Russian Minister of Defense A. Serdyukov demanding the return of $ 450 million, which are the duty of EESU to the Ministry of Defense of the Russian Federation as well as the publication of a book written by the former deputy prosecutor general of Ukraine - N. Obihod who supervised the case of P. Lazarenko's bribes. One of the conclusions in this book was the assertion about Tymoshenko’s complicity in major frauds, as well as tax evasion from personal income and an attempt to fraudulently recover VAT.

One of the episodes of the charge during the new investigation is that Tymoshenko transferred the $ 450-million debt of her corporation to the Russian Ministry of Defense to the state. This crime is the most financially weighty and has irrefutable evidence, and the current Prime Minister of Ukraine, N. Azarov, has repeatedly stated that the Ukrainian budget will not return the debts of “EESU” to the Russian Ministry of Defense.

The essence of the conspiracy was that Lazarenko, on behalf of the Government of Ukraine, ensured the conclusion of an agreement between UESU and the Ministry of Defense of the Russian Federation, as a result of which Tymoshenko received Russian gas for free, which she sold, but did not carry out a supply of building materials for the needs of the defense Russian department . As a result, a huge debt “hung” on the budget of Ukraine, since it was the government of the country that was the guarantor in this transaction.

In Russia, they found the culprit in the person of the chief financier of the Ministry of Defense G. Oleinik, depriving the general of all ranks and awards. Three months later he was amnestied, and a year later he was rehabilitated by a decision of the Presidium of the Supreme Court. But nevertheless Oleinik was sentenced to three years, but already in connection with the frauds with foreign currency bonds.

Oleinik argued that in the period 1996-1997. Three contracts were concluded between EESU and the Ministry of Defense of the Russian Federation for the supply of building materials for $ 300, $ 250, $ 200 million, respectively. The first contract “EESU” fulfilled completely, the second only in the amount of $ 123 million, and did not even start the implementation of the third. Oleinik believes that the reason for the disruption of supplies was the decision of the Ukrainian authorities in 1998 to deprive the corporation of foreign economic activity rights, therefore, the fulfillment of obligations under the agreements concluded was suspended.

As a result of the investigation, the Ukrainian side found out that Tymoshenko, instead of settling accounts with the Russian side, transferred money through sham firms abroad.

In 1998, EESU ceased to exist under pressure from the Tax Inspectorate. It was officially liquidated in 2009 by a decision of the founders. Even the fact that in the 2000-2001 years, Tymoshenko was responsible for the work of the entire fuel and energy complex of Ukraine, did not lead to the revival of "EESU".

But in the case of the Ministry of Defense with EESU, it is clear that such a deal could not be completed without the personal approval of Yeltsin and Kuchma. And besides Lazarenko, this agreement from the Russian side was “punched” by Chernomyrdin (at that time occupying the post of prime minister), Vyakhirev (head of Gazprom), Vavilov (deputy finance minister of the Russian Federation) and Grachev (minister of defense).

The corruption scheme of this agreement was well thought out and brilliantly executed. All Russian actors have safely escaped responsibility: who is to the other world (Chernomyrdin), who to other positions.

It was Chernomyrdin who convinced Igor Rodionov, who took the post of minister after Grachev’s resignation, to participate in the transaction, as a result of which financial assistance would be provided to the department through an agreement developed by the Ministry of Finance. Rodionov, who did not know how to pay for the maintenance of the army and the purchase of weapons, could not object to the Prime Minister. The amount of the proposed transaction was 30% of the budget allocated to the Ministry of Defense for construction purposes, and Rodionov seized on this idea. Also at this time, Ukraine had a huge debt to Gazprom. Needed a complex scheme of settlements.

The agreement from the Russian side was signed by Rodionov, Vavilov, heads of the tax service and Gazprom, and from the Ukrainian side, President of UESU Tymoshenko and the company United Energy International Limited, a member of the UESU corporation.

According to the former chief financier of the Ministry of Defense of the Russian Federation, he was puzzled by the fact that the sums of money were transferred under a contract that had already been paid under Grachev by treasury tax exemptions. But Vavilov personally demanded an urgent transfer of funds, resorting to hidden threats against the military financier. Everyone knew that Vavilov was the trustee of Yeltsin, so no one wanted to argue with him. It was on the initiative of Vavilov that special accounts were opened for all participants in the transaction. Hundreds of millions of dollars went according to the established scheme.

In 2004, the Americans forced the private plane Vavilov (at that time he was already a Russian senator) at the airport of Palm Beach and interrogated him in the case of P. Lazarenko. Vavilov managed to avoid responsibility this time: prosecutorial questions did not prevent him from acquiring real estate in New York worth more than $ 50 million. Only in 2010, Vavilov voluntarily left the Federation Council.

In the summer of 2004, the Russian prosecutor's office announced Tymoshenko on the international wanted list. She was accused of facts of the transfer of bribes to Russian defense ministers through their proxies for the conclusion of state contracts for the material and technical supply of the Russian army at inflated prices. After the victory of the Orange Revolution in Russia, the case was closed due to the “expiration of the statute of limitations.”

Of course, the role of Tymoshenko in the "big kid" of the Russian Defense Ministry is large, but without accomplices, she would not be able to perform such a large-scale interstate gesheft.

Moscow responded with silence to the result of a new trial by the Ukrainian side in the Tymoshenko case. Everyone knows that Putin did not give up the people of Yeltsin, but as a result of the trial, the names of the participants in the transaction will surely come up from the Russian side. Tymoshenko also will not be able to get away from the issues that are quite acute for her on the deal with the Defense Ministry of the Russian Federation.

At the same time, Tymoshenko’s associates believe that the appeal of the Minister of Defense of the Russian Federation to the Ukrainian cabinet of ministers demanding repayment of the debt is illegitimate, since, in their opinion, he has no right to directly address the Prime Minister of Ukraine.

Tymoshenko herself also denies the existence of the debt of the corporation "UESU" to the Russian military. She recalled that in 1996, the president of Ukraine, Kuchma and N. Azarov, who was the head of the tax service of Ukraine in 90, confiscated all the assets of her corporation, and the state cannot be responsible for the debts of commercial structures. Yulia Tymoshenko considers this demand for a return of debt to be a political provocation and that the claims of the Russian defense ministry are unfounded are wrong.

But whatever the outcome of the investigation, all this unsightly история can significantly harm the reputation of both Russia and Ukraine in the face of the global community.