August 27 2019
74
Today in Zhukovsky near Moscow starts the International Aviation and Space Salon MAKS-2019. The exhibition is scheduled to show many new products, but one old plane can attract much more attention than a dozen new ones. For the first time at the air show the general public will officially demonstrate the flight copy of the Golden Eagle in a static parking lot. It was this prototype of an aircraft with a reverse sweep wing that was initially considered as the basis of the fifth-generation Russian aircraft. 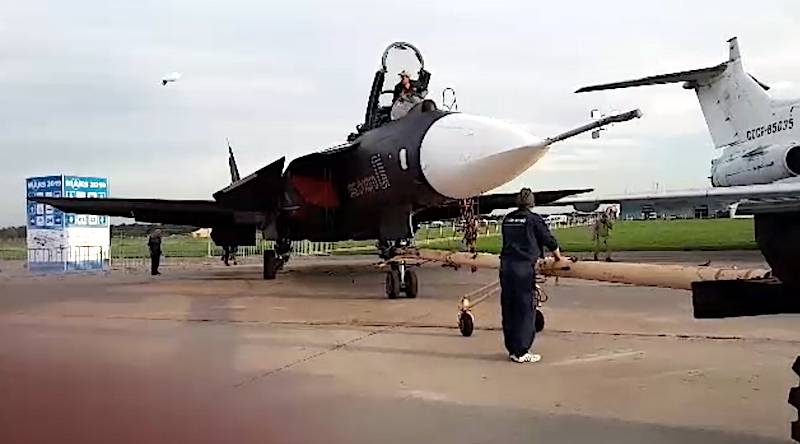 MAX-2019, not yet opening, has already issued a small sensation. AT historical parts of the cabin will be presented to the general public for the first time by the Golden Eagle, a fighter with a reverse sweep wing, in a static parking lot. The fighter was located along with the Tu-155. The car never went into production, but it made me talk about myself for many years, and still has one of the most recognizable looks.

The development of Su-47, which originally bore the Su-37 index, was started by Sukhoi Design Bureau in the 1983 year. The plane was supposed to be a development of the Su-27. First of all, the car was created in the interests of aircraft-carrying cruisers, and only then was it oriented towards the general needs of the Air Force. The development of the "Golden Eagle" then stopped in the 1988 year, then again resumed on an initiative basis.

The chief designer of this aircraft was Mikhail Poghosyan (later he headed the United Aircraft Corporation). The general designer of Sukhoi Design Bureau during this period was Mikhail Petrovich Simonov.

The flight copy of the "Golden Eagle" was built in the 1997 year. Its design with a sweep wing is made according to the aerodynamic scheme “longitudinal integral triplane”. The wing forms a single carrier system with the fuselage, can fold - a legacy of the orientation of the machine as a carrier-based fighter. Initially, the Su-47 also had a hook for landing on the deck.

In the construction, which is almost a quarter century, composite materials are actively used. It was noted that the use of carbon-fiber reinforced plastics increased weight returns by 20-25%. The resource increased by 1,5-3 times, a decrease in labor costs for the manufacture of parts was expected at the level of 40-60%.

The secret car is first shown at the MAX-2019 in a statistical parking lot. That during its first official appearance at the MAKS-1999 air show under the name Su-37, that when it was rolled out again in 2001 already under the name Su-47 "Golden Eagle", the general public was denied access to the car.

Golden Eagle was actively used as a flying laboratory in the development of the Su-57. In particular, a bomb bay was integrated into the airframe, the experience of which provided the necessary data for the development of this element for the fifth-generation Russian multifunctional.