BMP-3 will receive protection from shells and missiles

August 25 2019
146
Currently, the BMP-3 is the most advanced infantry fighting vehicle in service with the Russian army. Officially adopted in the 1987 year, the combat vehicle still has the potential for modernization and, in the future, will serve the military for more than a decade. Today, the Russian army is armed with more than 500 BMP-3, in addition to this, the infantry fighting vehicle was quite actively exported and is in service with the armies of Azerbaijan, Kuwait, Saudi Arabia, Venezuela, Indonesia and other states. 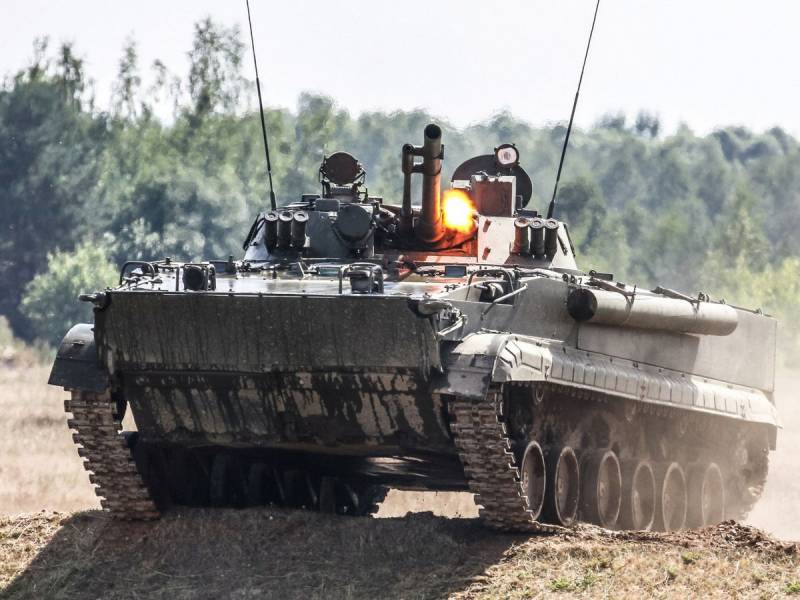 The main difference between the BMP-3 and most infantry fighting vehicles of other countries is a fairly powerful weapon, which is represented by an 100-mm gun / launcher and an 30-mm automatic gun. In addition, the BMP is armed with three 7,62-mm machine guns at once, two course and one PKT machine gun, paired with an artillery mount. The second main difference from competitors is that a machine weighing more than 18 tons is able to swim, overcoming water obstacles at a speed of up to 10 km / h. Recently, Russia has presented several options for upgrading the BMP-3, including the BMP-3M Dragun variant. And in mid-August of 2019, a representative of Rostec state corporation announced that the machines would be seriously modernized, primarily due to an increase in the level of protection, including the installation of active protection systems.

The protection of the BMP-3 will be tripled

As told reporters RIA News Sergey Abramov, who holds the post of industrial director of the conventional arms cluster, ammunition and special chemicals of the Rostec state corporation, is planning to equip the Russian BMP-3 with new active defense equipment during the modernization process. Thanks to an integrated approach, the protection of infantry fighting vehicles is planned to be increased several times. According to a senior representative of Rostec, the modernization potential of the last of the adopted Russian infantry fighting vehicles has not yet exhausted itself. In Russia, work is underway to create new systems for protecting BMPs against ballistic weapons, which include the widely spread worldwide CNG-9 and the RPG-7 hand grenade launcher. Currently, Rostec enterprises are working to strengthen the passive protection of the BMP-3, and are also working on various options for integrating modern active defense systems (KAZ) into the combat vehicle.

Under the complex of active protection means a kind of protection of armored vehicles from various means of destruction. KAZ is a system that is responsible for the detection of approaching tank or BMP of ammunition (anti-tank missiles and grenades, as well as shells) and counteraction to such ammunition in various ways from jamming to the destruction of incoming shells or their damage and weakening the damaging effect. As noted by Sergey Abramov, the use of such systems can increase the survivability of armored vehicles on the battlefield by about two to three times. 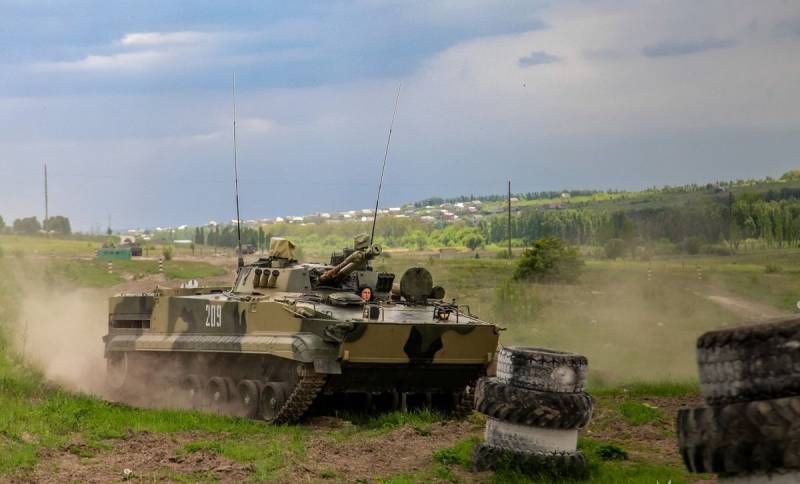 At the same time, the representative of the state corporation did not specify which KAZ will be installed on the upgraded versions of the BMP-3. Theoretically, this can be a modernized Arena complex, which was developed in the USSR in the 1980 years, or a new generation complex, called Afganit. This active defense system was specially created for installation on armored vehicles built on the basis of the Armata heavy tracked platform, primarily on the T-14 main battle tank and the T-15 infantry fighting vehicle. Separate components of the complex "Afganit" can be installed on other models of armored vehicles, including the promising Russian BMP "Kurganets-25".

At one time, the Soviet Union broke far ahead in the field of creating active defense systems for armored vehicles. Soviet engineers began to create the first such systems back in the 1970-ies, and already in the 1983 year in the USSR, the world's first KAZ, called "Drozd", was adopted. It was this active defense complex that became the first in the world to be mass-produced.

One of the options for upgrading the BMP-3 may be the installation on a combat vehicle of a modernized version of the Arena active defense system developed at the end of the 1980's. This version of the KAZ provides armored vehicles with protection against various types of anti-tank grenades and anti-tank guided missiles, it is also reported that the complex can hit cumulative shells. In Russia, an export version of this complex, which has received the designation “Arena-E,” has also been created. The complex includes a multifunctional radar and protective ammunition, which are fired towards the means of destruction approaching the tank. Narrowly targeted protective ammunition provides reliable destruction of missiles, grenades and cumulative shells with a beam of damaging elements. Moreover, the complex is all-weather, all-day and has excellent noise immunity. 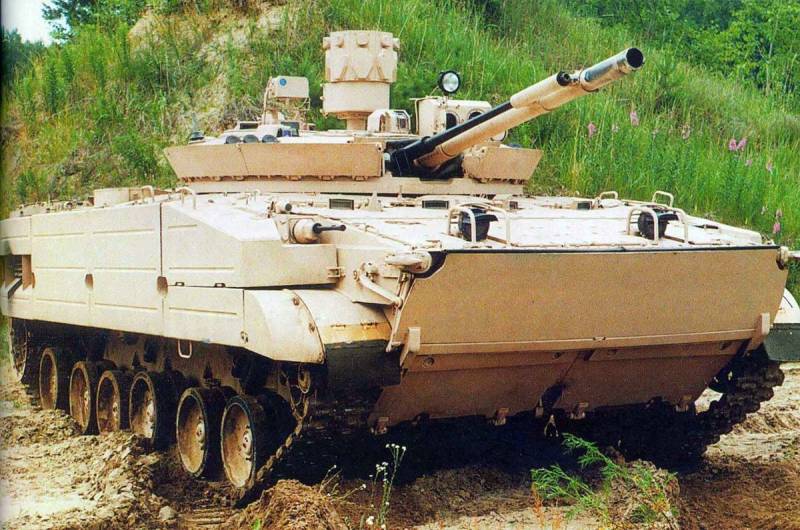 BMP-3 with KAZ Arena
Installation options for KAZ Arena on the BMP-3 were undertaken. As far back as 2003 in Russia, the BMP-3M variant with the Arena-E system installed was demonstrated, which made it possible to hit various types of ammunition flying up to a combat vehicle. The complex is effective against weapons flying at speeds from 70 to 700 m / s. Since the complex works completely in automatic mode, its use does not impose any additional load on the crews of armored military equipment.

A more sophisticated set of active defense is the "Afganit", which was specially designed for installation on armored vehicles, created on the basis of the heavy tracked platform "Armata". At the same time, experts note that there are no serious restrictions that would not allow the installation of the complex “Afganit” or its components on the armored vehicles of previous generations, including the BMP-3. The only serious obstacle may be only the cost of such a complex. A high-tech and complex system is quite expensive and it is the price that can become the factor that will erase any benefits from such an upgrade option. So far, “Afganit” could be seen only on “Armata”, “Kurganets” and “Boomerang”, which repeatedly became participants in various military parades.

A distinctive feature of the complex “Afganit” is the presence of a radar with an active phased antenna array (AFAR), made using the same technology as that of a radar mounted on a fifth-generation Russian fighter Su-57. The AFAR radar mounted on armored vehicles includes four panels that are located on the tank turret, providing 360 degrees of view without turning the turret and rotating the radar. In addition to these elements, the complex includes ultraviolet direction finders for ATGM launches and infrared cameras. At the same time, the active defense installed on the T-14 Armata tanks is able to cope not only with modern ATGMs and cumulative grenades, but also allows intercepting high-speed armor-piercing piercing shells (APCs). In addition to the active destruction of flying ammunition, the system can activate the installation of a smokemetal or aerosol curtain. 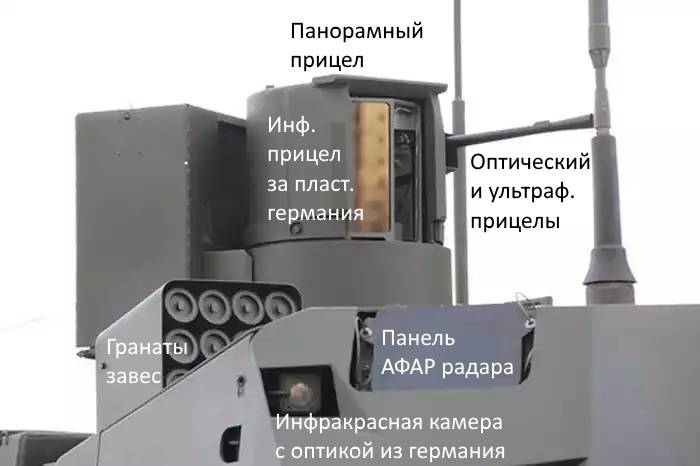 Version of the arrangement of Afghanit devices on the turret of the T-14 tank
Moreover, all KAZ complexes have the same drawback. The striking elements launched towards the approaching projectile pose a danger to the infantry surrounding the tank. For example, the developers of the Arena complex noted that the danger zone for infantrymen was 20-30 meters near the tank, while the protection of the tank itself or the infantry fighting vehicle poses no threat. For this reason, armored vehicles equipped with KAZ systems are forced to operate in isolation from infantry orders. For tanks, acting in isolation from the infantry is much simpler than for infantry fighting vehicles, which are designed to transport soldiers to the battlefield. Thus, the installation of KAZ on infantry fighting vehicles leads to a revision of the concept of their combat use and use on the battlefield, as well as the subsequent development of such use in exercises at all levels.

In 2015, two novelties of the domestic defense industry were presented to Russian viewers at an exhibition in Nizhny Tagil - the seriously modernized BMP-3M "Dragun" and self-propelled anti-aircraft artillery based on the BMP-3, armed with the new 57-mm automatic gun. ZSU received the designation "Derivation-Air Defense". Both novelties of the Russian defense industry are of great interest, they are able to extend the life of the BMP-3 for many decades.

At the same time, the BMP-3M "Dragoon", in fact, is already a completely different machine. The infantry fighting vehicle has undergone major processing, and it is not only about changing the layout of the BMP. From the old BMP, only the chassis and hull elements are left here. At the same time, the motor-transmission compartment was moved to the front of the machine, which increases the security of the paratroopers and crew. In fact, it was only in Dragoon that Russian designers turned to the layout classic for infantry fighting vehicles of other countries. In addition to additional protection for the landing party and crew, this solution improves the process of loading and unloading paratroopers from infantry fighting vehicles due to the appearance of a stern ramp. The full combat crew of the updated BMP model is 11 people, including three crew members. 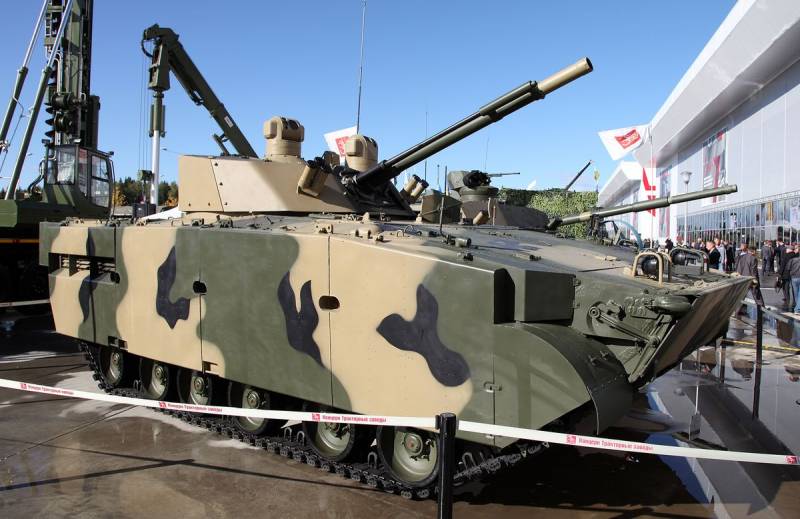 BMP-3M "Dragoon"
The second noticeable difference of the updated BMP is the completely uninhabited turret, which retained the same armament from the 100-mm semi-automatic gun, 30-mm automatic gun and 7,62-mm PKT machine gun. The crewless combat module made it possible to place all crew members inside the combat vehicle hull behind the engine, which made it possible to increase their protection.

The mass of the combat vehicle, which received improved protection, grew to 21 tons. At the same time, the designers installed a new multi-fuel UTD-32 multi-fuel engine at BMP Dragun, which develops 816 horsepower. This allowed us to achieve excellent power density indicators - up to 38 hp. per ton, it is much better than most of the main battle tanks and infantry fighting vehicles of various countries of the world. For example, this is almost twice as much as the main American Bradley M2 BMP. At the same time, the BMP-3M Dragun is able to accelerate along the highway to a speed exceeding 70 km / h. Despite the increased combat weight, the stout Dragun retained the ability to sail at speeds up to 10 km / h.

The combat capabilities of infantry fighting vehicles have grown due to the use of a modern fire control system, as well as the duplication of crew functions. The jobs of the commander of the combat vehicle and the gunner are completely unified, in addition to this, the electronic filling of the combat vehicle has been replenished with a built-in automatic target tracking system. At the same time, it can be noted that at any of the exhibitions the deepest modernization of the BMP-3 has not yet been demonstrated along with the installed active protection system.